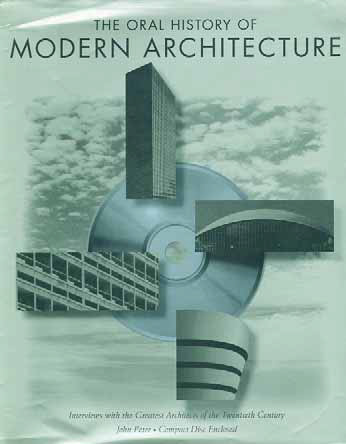 If you feel the same need I do to explore the vast and inspiring reaches of 20th-century structural forms, The Oral History of Modern Architecture by John Peter is a wonderful and enduring resource.

Published in 1994 by Harry N. Abrams (New York), this text features more than 100 interviews with modern architects, including in-depth discussions conducted by the author with a group he defines as the “Top Ten” masters of modern architecture.

The interviews were conducted in the stretch from 1953 to 1989, and several audio excerpts are provided on a CD that comes as a companion to the printed transcripts. And it’s quite a roster of luminaries, including Frank Lloyd Wright, Le Corbusier, Phillip Johnson, I. M. Pei, Walter Gropius, Ludwig Mies van der Rohe, Eero Saarinen, Louis Cahn, Oscar Niemeyer and Jose Luis Cert.

Although all of these masters can be firmly placed under the umbrella of “modern architecture,” the diversity of styles, philosophies and creative influences they represent is vast and tremendously rich. Peter pulls it all together by exploring a common set of ideas in each interview, delving specifically into what each of his subjects thinks about the roles of technology, society and art in their creative processes.

In addressing these common themes, Peter develops of basis for comparing these titans of design – which makes for compelling and often challenging reading. In other words, if what you seek is sets of rules and authoritative pronouncements on modernism, you’ll almost certainly be frustrated by the wild and sometimes conflicting ideas and approaches espoused by Peter’s Top Ten – not to mention the dozens of other figures you’ll meet in the book’s 390 pages.

The interviews offer rare insights into the nature of the artist’s life: So many of these architects saw themselves and their work as clear departures from the personalities and traditions of the past, and it’s fascinating to “eavesdrop” as they describe their uphill battles for acceptance and their struggles to win important commissions.

As Peter points out, their architecture is really only 80 years old, the successor to centuries of habit and practice expressed in classical or traditional forms. It’s plain that in many instances these architects assumed huge risks – and the one thing I missed was some discussion of setbacks and failures they endured on their paths to greatness.

On a different level, I was surprised and inspired to learn that, among the Top Ten listed above, three of these great architects had no formal training or education and arrived in the profession by way of construction work and other practical pathways. I found myself wondering if their careers would have been at all the same had they received that formal training.

Rather than making it easy on you by revealing the names of the three upstarts, I’ll leave it to you to exercise your own curiosity and find their identities through this book or some other resource. I’ll also leave you with the thought that modernism is such a rogue art form that it might be fair to assume that rejection of the past – or even ignorance of the rules and boundaries it teaches – is part of what made these outbursts of creativity possible.

Throughout, Peter also examines seminal works of modernism from around the world and strongly urges architects and designers to travel to as many of these sites as they can. Although most of my own “traveling” in this respect has come by way of books, he makes the case so persuasively that I am motivated in all new ways to see and appreciate these influential structures with my own eyes.