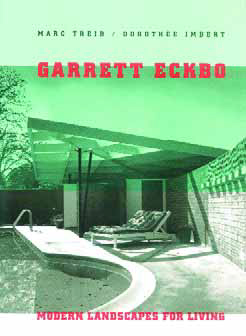 By now, we all know that pools and certain other watershape forms have been around since ancient times. It’s my strong suspicion, however, that most of us who design and build backyard swimming pools today would fail a pop quiz about those who pioneered the 20th-century genre of pool design.

I was among you in not knowing, for instance, about the seminal role played in this arena by a man named Garrett Eckbo – this despite the fact that he’s one of the icons of landscape architecture.

As a founding member of (and the “E” in) EDAW, Eckbo was responsible for some of the grandest public spaces in the United States. He was also, it seems, an innovator in residential garden and pool design who put his stamp on just about every basic pool form we use today.

I picked up this knowledge from a book by Marc Treib and Dorothy Imbert called Garrett Eckbo: Modern Landscapes for Living (University of California Press, 1997). The 190-page volume covers the major career phases of a California-based designer and longtime professor who

in turn studied under Walter Gropius and worked with the legendary landscape architect Thomas Church, among other luminaries.

The book divides Eckbo’s career into two distinct parts, an early one (but actually the second half of the book) in which he worked for Franklin Roosevelt’s Farm Security Administration developing (among other things) housing camps for migrant workers and public parks, and a later one in which he focused on residential landscape design. He was, it is clear, a force to be reckoned with on both sides of the equation.

Indeed, his work in residential settings is exceedingly important. He is the one who devised not only the kidney-shaped pool, but also the lazy “L” – and in doing so pretty much set the stage for all residential pool design through the middle of the 20th Century. To this day, much of what we do is still a tribute to Eckbo’s vision of utilitarian design suited to the needs of the American middle class.

It all may look a bit “retro” at this point, but in his day his work was distinctly unconventional. He completely abandoned classicism in favor of angular geometry and simple materials (mostly concrete and wood) and was noted for his ability to produce sublime results in postage-stamp backyards. His use of trellises, raised planters, deck spaces and basic shapes is at the heart of what most everyone thinks of as the classic backyard pool environment.

His favorite idea, the circular pool, never caught on, but he blazed many other trails we all follow today – a succession of ideas this book ably captures. At base, Eckbo’s is a legacy of hard realism: Like nobody else, he faced down the limitations of the modern suburban environment and had the imagination needed to make the most of its limited canvases.

As I see it, there are many legends of modern architecture (Frank Lloyd Wright, Le Corbusier, Ricardo Legoretta and John Lautner, to name a few), but the registry of landscape architects who rise to that level is much shorter. Garrett Eckbo definitely belongs in such a pantheon: He’s one of our greatest designers – and a watershaper to boot!