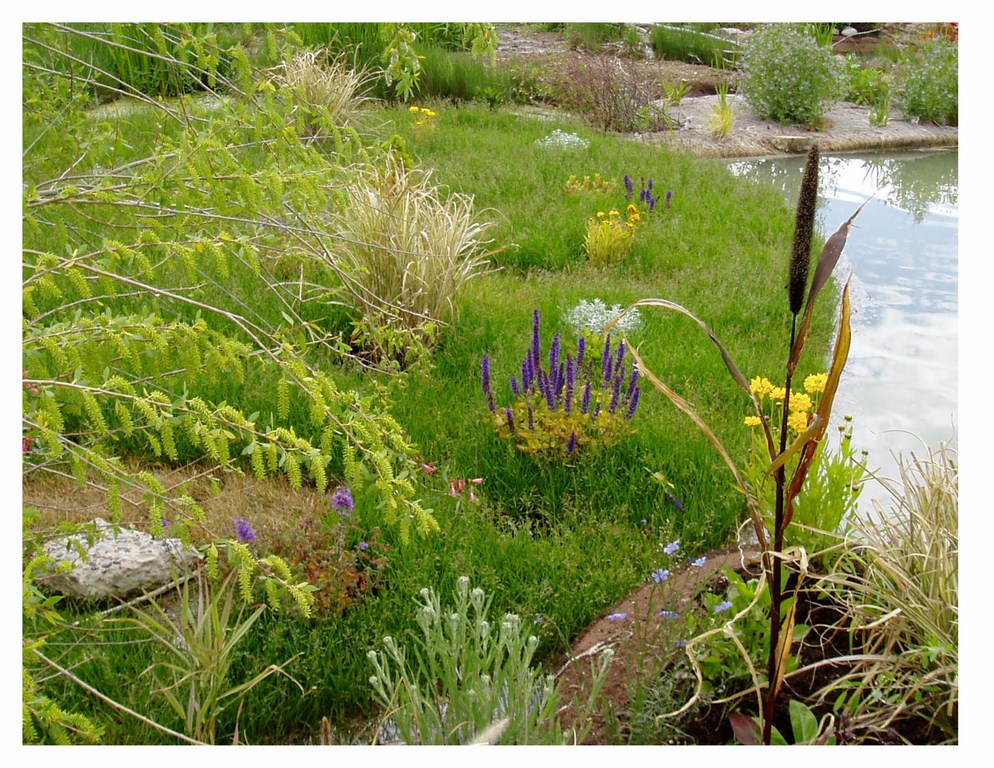 For a long time, I’ve studied a small lake that formed long ago in a natural bowl in Northern Wisconsin. It has about 20 acres of surface area and is now surrounded by a cow pasture and a cornfield.

Holsteins graze right up to the water’s edge and at times step into the lake to drink. Sometimes, cows being cows, their waste ends up in the water as well. On the opposite shore, the cornfield has an unusual configuration, with its furrows running straight down the slope and into the lake. When it rains or the fields are irrigated, some fertilizer inevitably washes into the lake.

The stage is set for aquatic misery: Viscous, pea-soup mats of green algae and foul odors are the common results of this sort of nutrient loading. Indeed, few life forms other than algae survive in

such water, and such situations are far from uncommon. Almost any waterway connected in these ways with human activity can experience profound nutrient surges, and the results tend not to be pretty.

While common sense would tell us its water should be a mess, the fact of the matter is, beyond a slight tannic tinge, that the water in this Wisconsin lake is crystal clear. And when you scoop up a sample in a clear glass, you see that it’s teeming with life – tiny critters enjoying a swim in water that smells fresh and doesn’t have anything more than the slightest trace of algae.

The role microorganisms play in maintaining water quality at this level is a fascinating but subtle topic that is understood mainly by interested chemists and microbiologists – and relatively few watershapers.

It’s a subject in which I’ve been engaged for years as my company, Floating Island International of Shepherd, Mont., has developed artificial systems capable of mimicking natural agents that foster water clarity. Through the years, I’ve learned that you don’t need a scholar’s level of familiarity with their secret lives to put microbes to work in either a natural or man-made body of water.

So what does this Wisconsin lake have going for it? Why isn’t it suffering under steady nutrient surges? Why hasn’t algae taken over here in the same way it does in backyard ponds and watergardens and, in fact, almost everywhere else? In this case (and the reason I’ve been studying it for so long), it’s because the lake has a natural floating island in it: That structure harbors the proliferation of microbes and the formation of biofilm, that is, colonies of life forms that essentially treat the water by consuming and thriving on large quantities of otherwise harmful nutrients.

Systems such as this one are the products of a natural evolution that has transpired through a period far longer than the existence of any man-made system. In general, these long-lived ecologies involve the integration of a multitude of living systems under one large “umbrella.” Within the Wisconsin lake, for example, are dozens of plant and other biological systems whose survival depends on the health of every other system present in the lake. 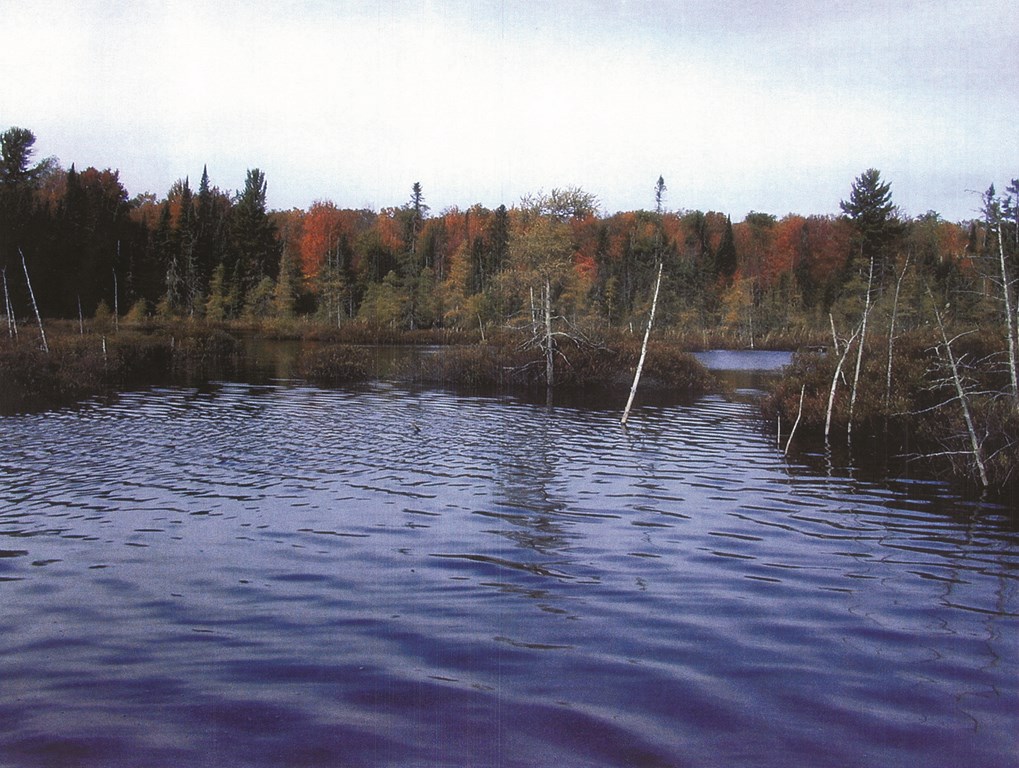 Indeed, almost all natural systems in a pond or lake interrelate with each other in some capacity. And the more interrelationships there are, the healthier the “umbrella” system. In this case, these living systems have worked out their balances over vast stretches of time through which they’ve been subjected to multiple competitions, synchronicities and symbiotic relationships that have all vectored toward a current healthy state – and this has continued to be true even in the face of a substantial intrusion by ranchers and farmers in the past few decades.

My point here is that, where nature designs for bio-diversity, we humans tend to design for monocultures when it comes to lakes and ponds. We insert fish and treat away other life forms, for example, developing an artificial “balance” that’s as fragile as can be.

So what is it about this lake that has kept it from hosting a monoculture? Why hasn’t it been overwhelmed by obvious nutrient surges? Why in the world isn’t it a literal cesspool of algae? The reason this lake has survived to this point without lapsing into extreme eutrophication is because, so far anyway, there are enough living systems in its confines to use and process any nutrient surges that come its way.

As I’ve just suggested, there are indeed tipping points between healthy water and foul, green, murky water, and the difference between the two states is embodied in living systems that take up nutrients in a process known as biological sequestration. 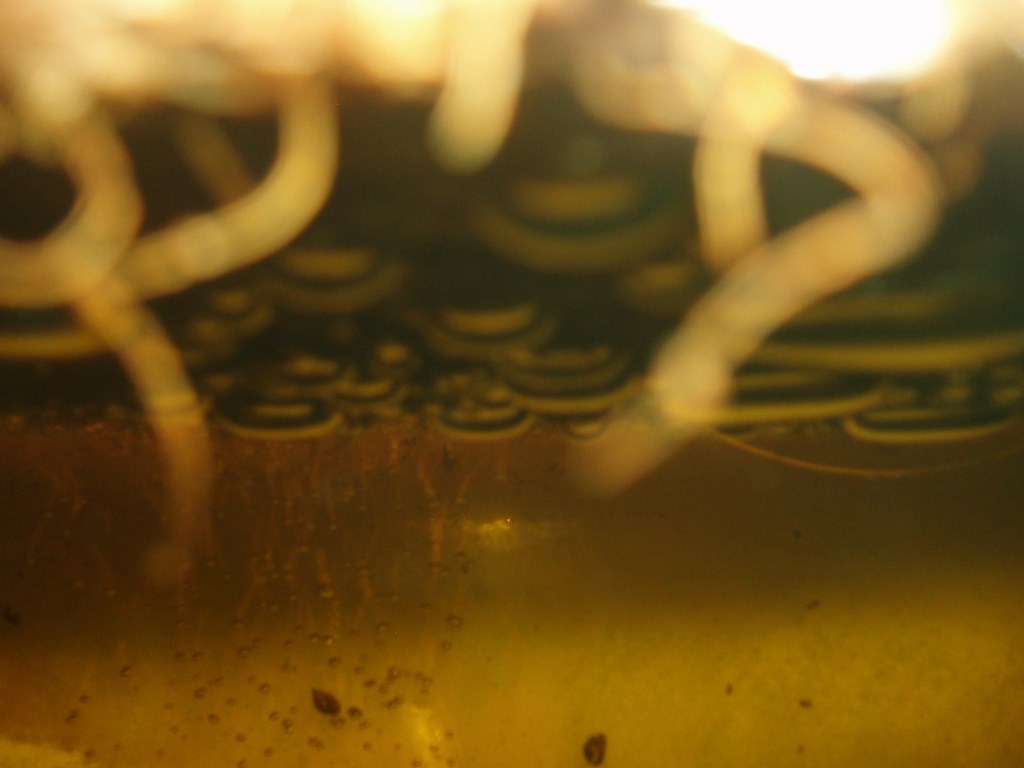 We’re all familiar with the concept of the food chain in which, generally speaking, small life forms are consumed by larger life forms. In that context, microbes, phytoplankton (algae) and zooplankton are at the very base of the chain – and of the three, microbes form the base of the base.

In a healthy natural system, microbes usually do most of the nutrient uptake and in a head-to-head battle of survival can out-consume (and therefore outgrow) even algae. Unlike free-floating algae, however, microbes require a surface area upon which to proliferate. If that surface area is adequate, they will steadily outperform algae.

Now back to the lake: It has avoided its tipping point because a natural, floating peat bog covers about a third of its surface area – about six acres in all – thus providing a high ratio of surface area relative to the water. Most of that surface area is on the underside of this floating island, where a matrix of roots extend throughout and around the physical structure and provide an absolutely enormous colonizable surface area on which microbes thrive and generate the biofilm that is the residue of microbial action.

And of course, the microbes aren’t alone: Plants growing on the shoreline and on the top surface of the floating island also tie up nutrients, with various studies indicating that, in lakes like this one, plants are typically responsible for 20 percent or so of nutrient uptake, while microbes are responsible for the other 80 percent.

And in addition to their role in nutrient uptake, microbes and biofilm are primarily organic material, which gives them extremely important potential as carbon sequestration tools as well. In other words, they tie up carbon dioxide that would otherwise more readily enter the atmosphere, improving water quality in the bargain.

As the base of the food chain, microbes and biofilm also set the stage for bio-diversity: Zooplankton, freshwater shrimp and countless other tiny life forms will grow in healthy water – and they all represent additional avenues for carbon sequestration. And ultimately, along with plant detritus, biofilm becomes humus, a critical component of fertile topsoil.

In other words, microbes truly rule.

Alongside microbes and biofilm, oxygen plays a pivotal role in cleaning and clearing water.

In the average lake or pond, the water can be in one of three states relative to oxygen: aerobic (that is, with oxygen), anoxic (where oxygen is tied up in a form that makes it unavailable to many organisms) and anaerobic (without oxygen). It’s interesting to note that all three of these conditions need to be happening within a watershape for all nutrients to be biologically sequestered or gasified.

The average wetland will normally provide all of these conditions, as will a lake or pond that has either a natural or artificial floating island to mimic the wetland effect. The key here, as mentioned above, is to provide microbes with the surface area they require to thrive and generate biofilm.

It’s also important with artificial systems to pair the wetland effect with a good circulation system: Except under extreme-cold or extended-cold conditions (when ice buildup might be an issue), it is always appropriate to aerate and/or otherwise keep the water moving. 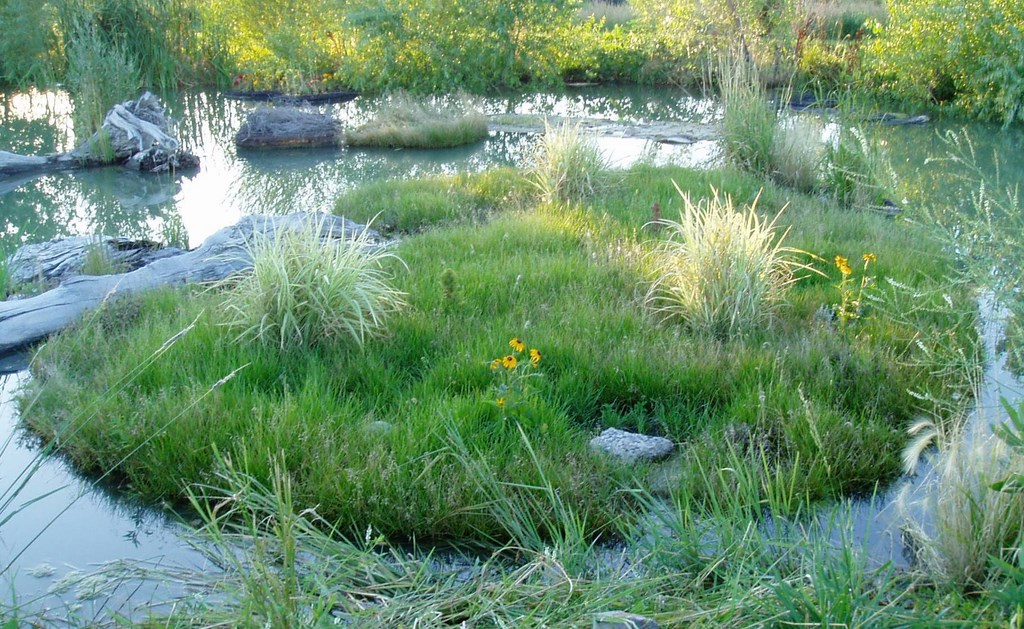 One drawback to the use of artificial-wetland systems is that they are basically incompatible with standard practices of water stewardship: Chemical water treatment, for example, is likely to harm one level or another of the biota and cause cascading damage throughout the system and to all forms of life, from microbes and plants to fish and birds.

Another key to good system design involves determining how much surface area is needed to maintain a healthy watershape – that is, how much wetland will be needed relative to the size of a pond or lake. Given the number of variables – size of the watershape, water depth, water temperature, inflow, outflow, aeration, positioning of an aerator relative to a floating island and more – this is a complicated issue. At the moment, however, it’s safe to say that more is better.

And “more” is a fairly easy target: My company’s floating islands are eight inches thick, which translates to 198 square feet of new surface area for every square foot of top surface area. At any total island size, this represents an enormously useful contribution to the surface area available in the pond or lake for formation of microbial colonies.

Ultimately, when a watershape design provides a place for microbes to form biofilm, you’re putting nature’s own water-treatment system to work in your mission of providing clients with clear, healthy, attractive water.

The lake I mentioned to start this article isn’t alone: At another location in Northern Wisconsin, for instance, I’ve seen a floating island that measured 30 acres in top surface area. It is 19 feet thick within 30 feet of its edge – a truly massive natural phenomenon the organic content of which amounts to 92 percent of its mass, thus providing for carbon sequestration on a grand scale.

It’s as though the whole of a wetlands system has been concentrated in a single, floating patch or microbe-encouraging heaven – an effect that has led several companies (including mine) to “bio-mimic” floating islands. 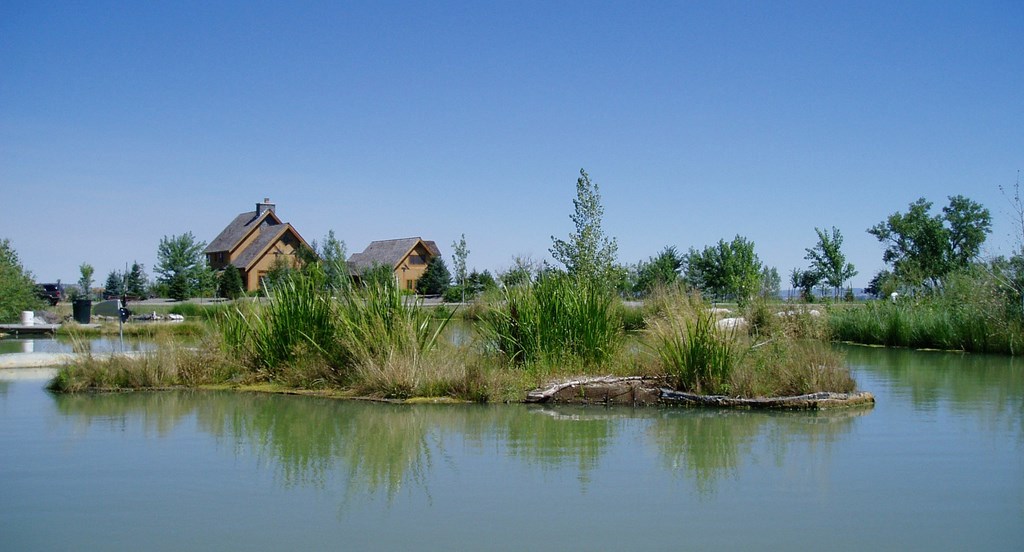 In addition, at least three non-profit entities are supporting water-quality enhancement through deployment of “floating treatment wetlands,” while government-sponsored research in New Zealand has been directed to determining the potential these systems have in the sequestration of heavy metals in stormwater retention ponds.

The thought to be drawn from all of this activity and the passion with which scientists and others are expanding the range of potential applications of floating-island technology is that this sort of bio-mimicry is an idea whose time has come.

The classic forms of water stewardship – complete with ungainly balancing acts of treatment and constant adjustment – are more frequently being described as dysfunctional these days. At the same time, recognition is growing that the effective design of sustainable systems entails taking responsibility for management of all living systems associated with what we build, from microbes all the way up through the food chain.

Studying natural systems that work and replicating those systems is in fact an emerging science. Increasingly, research is questioning the use of smooth pond liners, ultra-violet sterilization, copper sulfate algae management and other forms of chemical and technological intrusion, labeling these treatments as stopgaps that do not foster stable aquatic environments.

Truer sustainability is found in understanding the needs of microbes and biofilm. By integrating bio-mimicking constructs into our watershape designs, we will provide our clients with self-sustaining systems that represent both real value and a boost for the health of the planet.

Bruce Kania is an inventor with a successful track record in the licensing of product concepts in the prosthetic, orthotic, textile and sporting-goods industries. He originated the idea of replicating natural, self-sustaining floating islands while working at his research farm in eastern Montana and runs what amounts to a think tank of independent contractors through his company, Fountainhead LLC of Bozeman, Mont. In his work, he deliberately draws on an enormous talent pool centered in and around the state, finding creative people with the right skills to achieve innovative and marketable results.