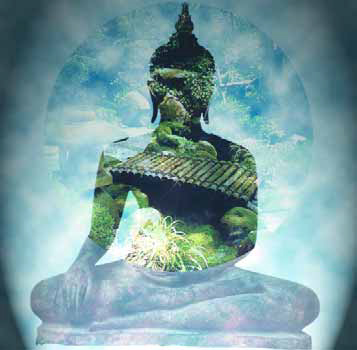 Last month, we covered a side-yard project that fulfilled one family’s dream of gaining a kitchen garden. This functional design worked well for what had basically been a small, unused space – but it’s by no means the only use for such spaces.

Small spaces can lend themselves to a number of different possibilities. Discussing the clients’ lifestyle or wish list might uncover something they really want or can identify ideas they haven’t yet considered as possible uses for the space.

Case in point: I had a client who wanted to create three distinct gardens on his property. One side yard was to be a cottage garden, a corner of the back yard would have a Mediterranean feel, and the other side yard, which housed pool and air-conditioning equipment, was envisioned as a meditative space.

Because of the configuration of his yard and the way the existing pool and patios divided the space, it was actually possible to create these different gardens on one property and make it all work.

The west side yard – the one allocated to a formal cottage garden – was wide enough for a fountain and patio that now comfortably holds a dining table and chairs. The Mediterranean garden was set in a corner of the yard adjacent to the pool and was designed to frame spectacular valley views beyond a precipitous 50-foot vertical drop.

Those spaces were relatively easy to plan and install, but the third space, the east side yard with the pool/spa equipment and the air-conditioning unit, was a virtual wasteland – and seemingly more difficult to define.

The task was to take this 60-by-18-foot space and turn it into a meditative garden, somehow hiding the fact that it was surrounded by concrete and flat structures on both sides and, most awkwardly, had an unscreened air conditioning unit plopped right in the middle of the space and up against the house.

As we talked about the space and took a closer look, however, this part of the project fell into place as well. We started by defining the style of the garden as loosely Asian, keeping the area as open and useable as possible while still offering my client his privacy.

He’d expressed a desire to have water in this area, but he also let me know clearly that he wasn’t interested in maintenance. So we decided that we’d simulate water by arranging boulders, rocks and pebbles to suggest a watercourse. To add movement to the simulation, I set up a winding, flowing river that snaked an S curve through the length of the garden.

We cut a channel about a foot deep and sloped its sides to create a natural contour – all in keeping with Asian gardening principles by which the vastness of nature is mimicked in details and patterns – but on a much smaller scale.

Next, to continue shaping the garden, we snaked a pathway in the opposite direction from the river, using Bouquet Canyon stepping stones and setting up a teak footbridge. This would allow my client to move through his garden without having to “wade” or jump across the river.

With those key elements set, we built two platforms – one at each end of the space. The river “flowed” from underneath one and passed below the other with a clear sense of beginning and ending and thereby conjuring the illusion that the water flowed from somewhere and continued past the platform at the other end.

This process of simulating water may seem unusual to those who see themselves as watershapers, but the basic principles are the same with or without water. The key to the illusion in this case was creating the sense that the observer in the garden is seeing only a small part of a larger body of water that comes from somewhere and continues on to someplace else. If you succeed, the waterway will fit naturally into its setting.

In this case, everything was working – and now we were ready to add plants. 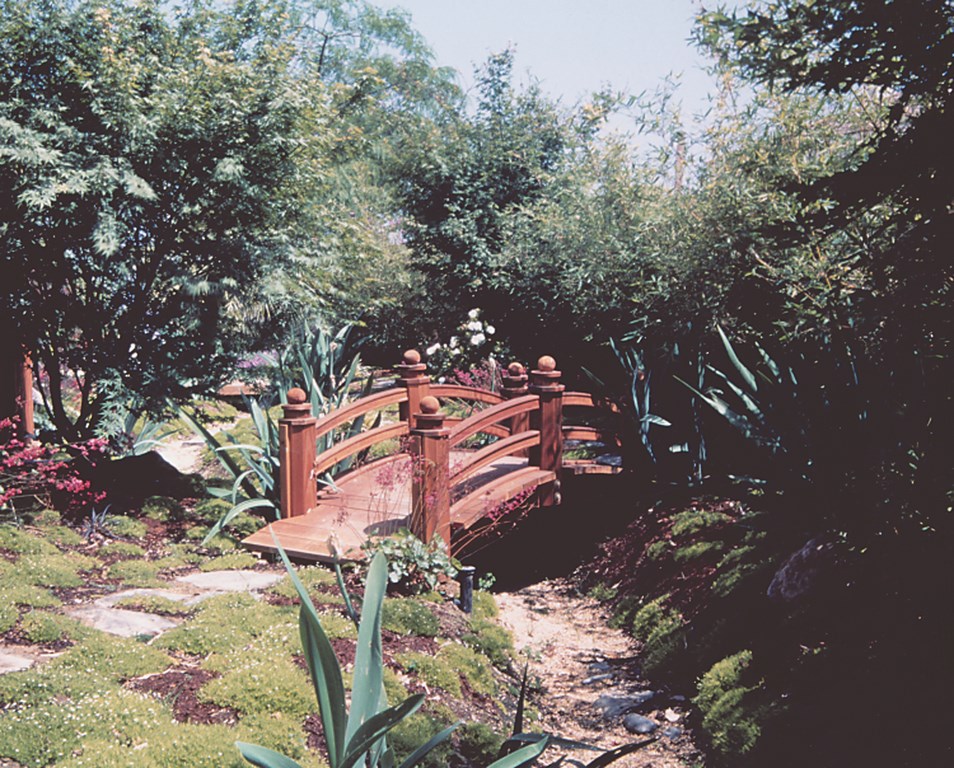 I selected a palette that suited an Asian garden. We began the transformation of this rectangular area into something peaceful and meditative by camouflaging the client’s house on one side and screening out the next door neighbor’s home on the other.

To minimize the encroachment of plants into the open space, we attached vines to the owner’s house and placed Golden Goddess Bamboo along the wall. Although the bamboo stood out about three feet and therefore did cut into our useable space, it also both the wall and the neighbor’s house without appearing like a large, flat screen. In fact, the softness of the bamboo leaves started lending a feeling of serenity to the space as soon as we planted it.

Next, we added Japanese maples. There are so many great maples that I will save a more detailed discussion of them for another column, but suffice it to say that we used them to add color, dimension and texture to the planting plan. On a more practical basis, we also used them and a vine-planted wood screen to hide the air-conditioning unit while still allowing access and leaving enough space for proper airflow.

White Alaska azaleas, Gardenia augusta ‘Mystery,’ Bearded Irises, Liriope spicata ‘Silver Dragon’ and Heuchera sanguinea made up the bulk of the rest of the planting. In particular, we placed the irises on the edge of the river to mimic the way plants grow on the margins of natural streams.

The balance of the open area was covered with Sagina subulata ‘Aurea,’ otherwise known as Scotch Moss. The lime-green color of this tightly knit groundcover added not only brightness to the entire space, but also set off the rest of the plants with its brilliance.

When all the planting was complete, we returned to the riverbed and lined it with smaller stones and rocks as they might naturally be seen in a streambed. To enhance the visual sense of flow, I took small Mexican river rocks and strategically placed them “downstream” from their larger cousins. When you stand back to view these arrangements, it really does appear as though water has swirled around the rocks before flowing away.

The final touch was a layer of small (1/4- to 3/8-inch) coral pebbles. Their light-peach hue accented the riverbed, setting it apart visually from the rest of the planted space. Our goal was to make the river a focal point rather than having it blend in.

The finished garden achieved our goals and offered my client an environment designed to soothe his soul. It also transformed a wasteland of a side yard into a completely useable, functional and beautiful space.

Next month: A discussion of Japanese maples – what types to use and where to place them.