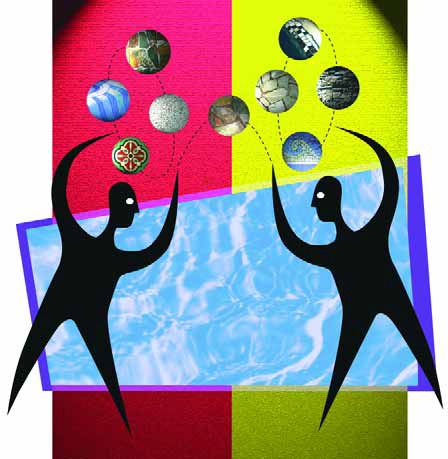 Lately I’ve been finding myself in what seems like a fairly unique position: On the one hand, I work as a design consultant for architects and as a designer for high-end customers; on the other, I work as a builder executing the designs that customers and their architects choose.

In this dual capacity, I’ve been able to gather a tremendous amount of input from construction clients and transfer it in one form or another as a consultant. I also have had the opportunity of seeing how decisions made in the design process play out during the construction process.

Seeing both sides has led me to certain conclusions, chief among them being that clients are looking for more choices when it comes to selecting materials for their projects. In fact, I’d say that materials – more than any other element in watershape design and construction – enable both watershaper and client to elevate even the simplest of projects.

Increasing these options is a two-step process: First, you have to educate yourself with respect to what’s available out there – and there’s no shortcut around doing your homework and accepting the fact that you sometimes must do a lot of digging to get the information you need.

Second (and the topic of this particular discussion) is the need to use what you discover and communicate it to your clients. This may sound incredibly simple, but I’ve come to find in talking to all sorts of people in this business that communicating materials options is a bigger challenge than I would have thought.

The sad fact is that, as an industry – and especially the old-line pool and spa industry – we have been extremely slow to add new types of materials to our bags of tricks.

I remember a time when tile selections, for example, were all made for us by a relatively small handful of suppliers who carried a pretty narrow range of what were known as “swimming pool tiles” that didn’t reflect at all the expansive world of available tiles. Their vision was limited, and so, as a consequence, was ours. And the tile folks weren’t alone, because I could say the same thing about suppliers of coping, decking and interior surface materials.

As I grew as a watershaper, and especially as I became more involved in design work, I began to run into people who had worked with unusual materials (unusual to me and most pool people I knew, anyway) such as granite, tumbled marble, irregular stone and all sorts of different products from around the world. It didn’t take long to recognize that I had been working with an extremely limited palette.

And when I began offering these newly discovered options to my clients, I immediately discovered just how excited they could become about certain options.

Invariably, I found the things that they really liked were those things they hadn’t been shown by other contractors. And it hit me: Offering a broader set of material options was a way to make my prospects happy, distinguish me from the competition, add value to the work and add distinction to the finished product.

Even in situations where clients stayed with more-familiar material selections, the simple task of making other things available had value in that my customers had choices and were satisfied that they had seen a range of materials in making their selections.

Just about the best case I can make for broadening the range of options clients are offered has to do with pebble or exposed-aggregate finishes.

We’ve all seen pebble surfaces, and it’s no secret that they’ve caught on to become among the most popular surface options going these days. I can remember just a few years ago, however, when that was not the case: Lots of people even scoffed at pebbles, saying the surface was too exotic, too expensive and too difficult to install. More important, the doubters thought there was no way that their clients would go for something so alien in appearance and texture.

Today, many of those same people offer pebble surfaces.

The key here is that even when the client opts for regular plaster, it’s empowering for both contractor and client to weigh the option. And the fact is we’re still seeing the effects of a real revolution in pool finishes, one that has stepped well beyond white plaster and even pebbles to encompass polished aggregate finishes and new options when it comes to colors in plaster, pebbles and even pool paints.

Clearly, suppliers have moved toward greater diversity and options as consumer demand for a broader range of quality products has increased.

I learned my first lesson in the materials-option game many years ago, when I began offering an all-tile option to my prospects. Mind you, this was several years back when a far larger number of my clients were in the middle class than is the case now. At the time, people in the industry told me I was crazy because, after all, there was no way regular working folks would pony up the money for all that tile.

Much to my satisfaction, however, a good number of my mid-range clients did opt for all-tile pools. Had they never been given the option, I’m sure they would have been happy with a lesser finish – but when given the choice, somehow they found the money. The tile surface was something that inspired them, and they decided it was worth the extra money to have something special.

The point behind all of this is that it’s virtually impossible for me or anyone else to make value judgments for other people – which is exactly what we do when we limit the range of materials we offer.

How can we possibly know what our prospects are willing to buy until we present them with their choices? To be sure, not many of mine have gone the all-tile route, but some have – and they wind up being very happy with the choice they made. And I have to say I didn’t mind making a few extra dollars on those sales as a result.

I accept the fact that this notion of expanding the materials menu is a given when working with extremely high-end clients. These are often people who tell you, up front, that they are only interested if you can come up with something special. At that point, doing the homework and ferreting out sources of supply isn’t an option for me or any other designer.

But none of this diminishes the fact that the same principle works with clients of more modest means. In fact, I’ve found that whenever I’m dealing with a modest design and a supposedly modest budget, this is the time to emphasize options with special materials as a means of making the project special.

Here’s my thinking: Small vessels require less material, so the added cost of coral or marble or natural stone or a couple of big boulders is going to be less than would be true with a big project. And, perhaps more significant, the net effect of the improved material is more dramatic in smaller jobs.

I recently designed, for example, a five-by-five-foot fountain with an 18-inch deep basin. If I had stayed with a traditional approach to the project, I probably would have gone with bullnose coping, swimming pool tile and a white-plaster finish – and it would have looked fine, but not much different from thousands of other fountains out there.

Instead, I offered the clients some options, and they opted for a beautiful glass-tile surface, coral coping and a gorgeous statue. Because the job was so small, the difference in cost was a few thousand dollars.

If you were to put the two possible versions of this fountain side by side, one would be beautiful, a work of art, while the other would be common, barely worth a second glance. And the only difference would be in the materials.

In recent columns, I’ve mentioned a spa project I did near Latrobe, Pa. – a stainless steel spa lined with deep blue/black granite. The clients came to me by referral, and when we first spoke they told me that they had already talked with several people from the pool industry.

One of the first things they mentioned was that they had not been impressed by the material options they had been presented. They’d done some homework on their own, and they had decided not only that they wanted a stainless steel spa but also that they wanted something special to finish it off.

Some contractors they spoke with told them that stainless steel spas could not be surfaced with stone or any other material. When I told them that I was confident that I could meet their needs (and that, by the way, you absolutely can surface stainless steel with a variety of other materials, including stone and tile), they paid to fly me up to discuss the possibilities. Ultimately, they chose the dark granite as well as several other design options I suggested.

A similar situation arose with clients in upstate New York who wanted their pool and deck to reflect and complement the architecture of their home. They, too, had talked with local pool companies who had refused to show them anything other than a few extremely ordinary tile options, none of which did the trick. And when the clients had pressed for more options, the contractors begged off, saying that other materials were too expensive and too hard to work with.

Again, the clients reached me via referral and were anxious to see material samples. I packaged up a set of samples and sent them off, and they ended up selecting a beautiful tumbled verde marble – expensive and a bit more difficult to install, but a great look with which the clients are thrilled.

In these two cases and many others I could share, clients came to regard me in a much different light than the other people they had encountered. And all I really had done was accommodate their desire to have lots of materials options from which to choose. The only difference between me and the others was that I was interested in exploring a greater range of possibilities.

I am convinced through my own experience and many, many conversations with other designers and builders that what I’ve discussed here is much more than a high-end thing.

Sure, the issues sort themselves out more cleanly when budgets are large, but what we’ve covered here reaches to every level of the watershaping trades. It’s absolutely an area where mid-range and even lower-end homeowners can elevate their projects in terms of value and aesthetics. (I’d also argue that the same ideas apply to hydraulic design and equipment selection just as well!)

The simple truth is that you don’t have to be a zillionaire to appreciate beautiful things. That in mind, it makes sense to offer all prospects a range of material options – and let them decide for themselves what’s too expensive or too exotic.

My informed suspicion is that if all watershape prospects were presented with a full range of materials, a great many would make surprising choices. More important, the beauty of the finished products and the satisfaction these clients would derive from them will be enhanced tremendously.

And if they do opt for bullnose coping, blue floral tile and white plaster, well, at least you can rest assured to know that you’ve determined what your clients really want – not just what they’re settling for because they haven’t seen anything else!