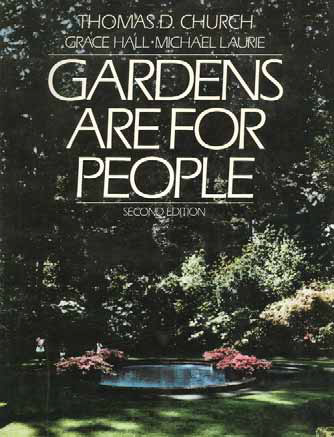 One of the first books about landscape architecture I ever read was Gardens Are for People by Thomas Church, a designer justly famous for changing the way exterior spaces are treated today – especially in the residential environment.

This book was first published in 1953, but a second edition (published in 1983 by Reinhold Publishing Corp.) is still widely available in bookstores and on the Internet. The 250-plus-page book traces Church’s long career, which started in California in the 1930s and lasted through the late ’70s and almost to his death in 1978.

His great gift was taking the art of landscape architecture and applying it to the masses.

Before him, landscape architecture was a highly formal discipline, for the most part reserved for large private estates and commercial or public spaces. Observing the development of a huge middle-class population that liked to spend time outdoors in California’s mild climates, Church was among the first to approach the small and previously undistinguished spaces that came with their residences and was instrumental in creating the concept of outdoor “rooms” and backyard retreats.

He didn’t have one particular style, which also was particularly unusual for his time – and is even uncommon today. Instead, he was driven by three primary factors: the clients’ desires, their home’s architecture and the site – as is evidenced in the extreme variety found in his work.

Many of his early projects were in the San Francisco area, where tiny yards became the norm as far back as 50 years ago. Inspired by his surroundings, Church used views, slopes and exposures to his clients’ advantage, took particular care in arranging spaces to take advantage of sun and shade, and was a big advocate of working with existing site features. It seems strange today, but he was actually a pioneer when it came to working with a site’s existing trees, particularly the majestic Live Oaks so common in California.

In everything he did, Church was guided by four design principles – unity, function, simplicity and scale – and his book eloquently describes how these principles are brought to bear in nearly all of his projects.

For watershapers, Church was truly a seminal figure, in his time perhaps the most influential designer working on backyard pools and the creator of some of the first truly “custom” backyard watershapes. At a time when rectangular pools were the rule, he was working with free-form designs, raised coping, water lounges, boulders – and then-outlandish materials such as green and black plaster.

He also worked to incorporate his pools into their landscapes, sometimes moving them away from the home to create secondary settings. He designed bathhouses, patio areas and outdoor kitchens as well – truly ahead of his time. One of his most famous pools featured a free-form piece of sculpture placed directly in the swimming pool to mirror the vessel’s free-form shape. This project has been featured in magazines and on television for decades.

For me personally, Church’s book and career have had a huge influence. More than anything else, his approach encouraged me as I moved into residential design, and he showed me how, even when working in a small space, we can design environments that are truly something special.