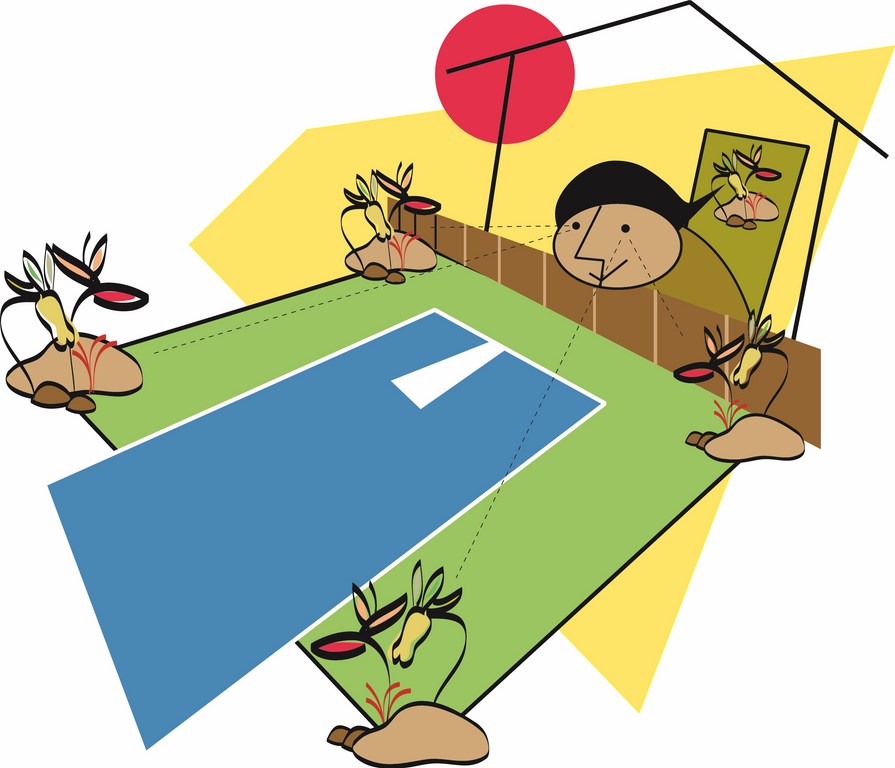 By repeating something from one place in the yard to another, you tie everything together – and expand upon an idea that has already worked somewhere else in that yard.

With landscaping, this doesn’t always have to mean plants. When you find something that works and you like it, why not stick with it?

Last month, I told you how we turned a small wasteland into an indoor oasis for one of my clients. When we were finished with the project, the clients were so pleased by the look and feel of their atrium that they wanted to continue the process of re-landscaping their home, this time outdoors.

The look and feeling created in the atrium can’t be defined as a specific style, but the result epitomizes tranquility and a naturalistic look. They wanted to carry this same positive feeling outdoors, starting with the pool area.

[ ] The pool. I brought in a watershaper to work with the clients on this part of the project. We realized that most of the existing hardscape and pool had to be redesigned to get the feeling and natural look they wanted to achieve.

Like the house and its atrium, the pool had been built in the ’60s and had been replastered – but was in need of much more attention. The challenge was how to redesign the pool while taking advantage of the existing grade of the yard and simultaneously expanding the visual length and appeal of the yard.

The rest of the property also would need some attention but was visually and physically divided from the pool yard by the family room “wing” of the house. The only thing this other yard would need as far as hardscape was concerned were new patios off the living room and bedroom and stepping pads in between.

We concentrated first on the pool area, knowing that the style of the other yard could be different because of the visual barrier. In the end, however, we linked the two by repeating the soft, brushed finish of the concrete pool decking for the patios and stepping pads.

[ ] The slope. We decided to start by slowly removing existing overgrown brush, including some very nasty bougainvillea (those thorns are deadly), plumbago, pittosporums, and various other volunteer plants that had been allowed to overgrow the yard for the past 20 years or more. The clients were behind the deliberate approach, because they weren’t sure where we should stop – or what we would find beneath the overgrown plants.

We didn’t realize when we started that we would end up removing all of the plantings in the yard except for some border plants and the large pine trees. This ended up changing the whole plan: As it turned out, the yard gently sloped up toward the neighbor’s yard behind the existing pool, getting gradually steeper near the top of the slope.

About eight feet behind the existing pool was a concrete-block retaining wall that was unsightly but retained much of the slope, including the pine trees.

With all the old plantings stripped away and the contours of the site clearly visible, we began the process of redefining the pool yard.

The watershaper came up with a plan that simulated a raised bond beam. By adding the new beam, placing soil between the new pool walls and the existing retaining wall and also bringing down the retaining wall a little so we could cover it over, we were able to create a smooth, gentle slope that blends the pool into the landscape more easily.

The old retaining wall still holds back the soil and slows down any excess irrigation runoff created by the new landscaping – but now you can’t see it. 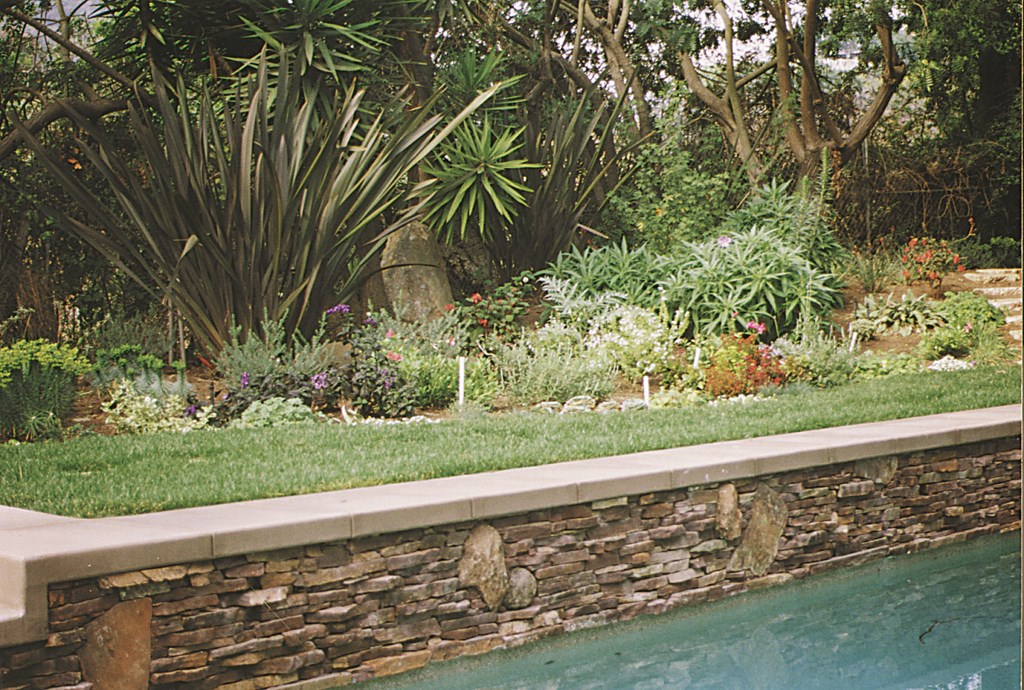 In refurbishing the pool, the watershaper kept the coping on the slope side at a minimum, with grass planted right up to it. Now, instead of seeing a pool, then a deck, then a wall, then a slope with a wall of plants, you see the pool and then a vast, expansive, lushly planted slope – quite a different and more natural impression.

The clients and the watershaper also decided to repeat the wall treatment of the atrium on the raised walls of the pool. Masons veneered the notched beam by randomly ledgering it with chocolate moss stone interspersed with larger, rounder stones to make the wall look even more natural/less man-made (Figure 1 above). (The builder waterproofed the rear of the raised beam to prevent calcium from leeching through to the applied stone veneer.)

Since you can see both the pool and atrium from most of the family room, it creates a nice visual tie between the two, drawing your eye more to the landscaping and giving the room a nice indoor/outdoor feel. 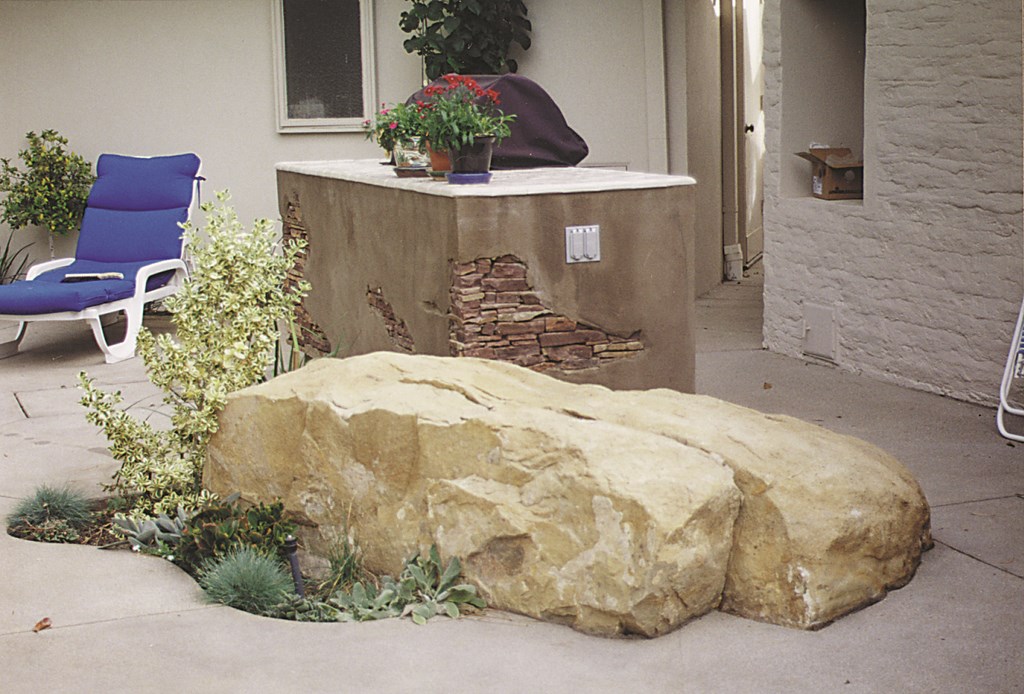 To add another nice touch, the watershaper took the ledgering element and repeated it on the barbecue – with a special twist. He built the barbecue around a very large boulder that had been in the yard. He ledgered the corners of the barbecue randomly, partially covering the stone with concrete to give the barbecue a time-weathered look (Figure 2).

He also considered the client’s desire for a natural feel when he decided to leave a cutout for planting at the junction of the boulder and the barbecue. This enabled us to soften up the concrete look while tying what otherwise might be an intrusive structure in with natural elements that already existed in the yard.

The yard around and above the pool was planted with a combination of succulents, roses (that we’re putting in as you are reading this), herbs, vegetables, a variety of large shrubs and many drought-tolerant and Southwest-style plants.

The client wanted a full, natural yard without the look of a chaotic cottage garden. By using this mix of plants, we were able to tie the desert-like look of the raised pool wall in with the plantings.