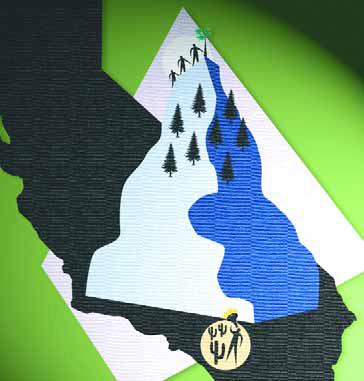 It’s pretty obvious that designing projects outside your familiar climate zone takes some ingenuity and resourcefulness. That’s something I could have told you before I tackled a project near Lake Arrowhead in Southern California’s mountains – a world away from my usual work in the hot, arid San Fernando Valley or on Los Angeles’ temperate west side.

What the experience drove home for me, however, is the importance when you’re working away from your home base of finding people in that “alien” zone who know what they’re doing and are willing to work with you in realizing your vision.

There were, for example, so many practical questions no guidebook could easily answer about which plants really do survive throughout the year under the area’s extreme conditions. There was also the simple necessity of working in a place where outsiders are often unwelcome and getting straight answers to questions can be about as difficult as getting a presidential pardon.

I even encountered one nursery/landscape firm that flat out would not return my calls, but eventually I was lucky enough to find a gracious, informative and extremely capable company that made working on this project an absolute dream.

Armed with my fax machine and my new favorite business associate, I was able to select a plant palette suitable for Zone 3A – a three-step process that included sending the nursery a potential plant list based on my research in garden guides; receiving a list back noting which selections would work best based on the nursery’s experience – and which ones won’t work at all; and then refining the list to include only those plants I would ultimately use.

Next, it was time to find contractors. I knew that very few of those I worked with “down the hill” would be willing to drive so great a distance to work on this project – or, if they were willing, could keep their fees for travel time down to a level that made it possible to stay on budget. I also found that more than a few weren’t pleased by the prospect or inconvenience of working in a completely different geographic area.

So I began looking for local contractors who were interested in a plan that included fences, a deck, decomposed granite pathways, a railroad tie bridge, a streambed and plenty of plants to shield the property from the neighbors’ lines of sight.

My clients had relationships with a number of contractors whom they’d used to perform electrical, plumbing and other construction projects on their residence, but when it came to getting bids for various portions of the backyard design, the same people were unavailable or simply non-responsive, presumably because they were either busy or their portions of the project were too small.

As I plugged away at that challenge, I focused on what I considered to be the most important part of the package: the irrigation system.

No matter what we installed for plants or hardscape, if the plants weren’t being watered properly, none of the design would ultimately be pleasing. As a matter of fact, it’s been my observation through the years that irrigation is ultimately the most important factor on any landscape installation.

There are plenty of licensed irrigation contractors in most areas and I’m certain I could have lured one up the mountain to do this job. But I knew I needed a specialist who could install a system that would take into account the unique nature of the mountain environment – in other words, someone who worked primarily in the Lake Arrowhead area. Eventually, I found one who was responsive and willing to accommodate my needs as an out-of-the-area designer.

Frustration returned when I tried to find a local hardscape contractor. After a while, I approached the nursery I was working with and asked them to bid the entire project. They accepted, and the installation process suddenly became much easier.

I hadn’t approached them for a bid in the first place because I had the sense that I was asking a lot of them: They had no direct knowledge of me or my work and were basically doing everything for me on faith. Ultimately, however, they were willing to go the extra mile and were rewarded with a nice contract on the entire project – including ongoing maintenance of the property when I was gone. 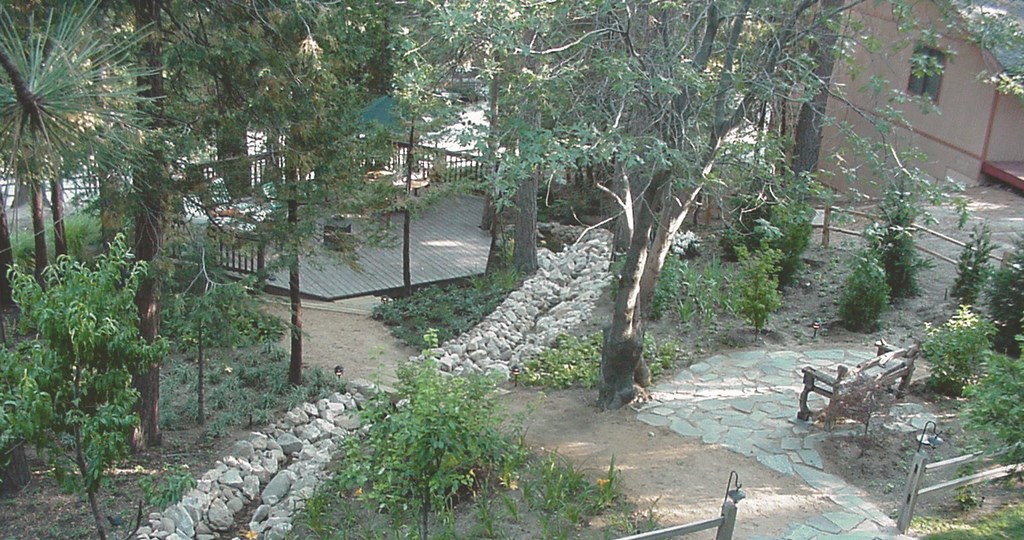 I also learned some lessons about the weather: It seldom rains in Southern California in these drought-tending times, so it seems entirely appropriate that chose the only two days of the past year that it did rain to go up to Lake Arrowhead.

As a result, my key meeting with the head of the nursery/landscape firm was conducted in the rain – which I took as a further demonstration of the company’s willingness to get involved and do a good job. Completed design in hand, we plotted out a timetable for installing the fencing, the deck and the pathways along with the streambed, the irrigation system and the plants.

A trip to the nursery on the second of my rain-drenched visits nailed down specific plant varieties and gave us the opportunity to see the coral bark maples and other unusual varieties the nursery was willing to obtain for me.

As I mentioned last time, they originally told me they’d be unable to accommodate my maple selections. When I pressed the point and made it clear I’d go elsewhere to get the varieties I wanted, their business sense took over.

The local reception has been so positive that they will now carry these maples regularly. It didn’t take much persuading: While the trees were on hand awaiting delivery to us, many of their steady customers admired the trees and tried to buy them from us. I felt good about that: Lake Arrowhead is a relatively small community, and I liked having the feeling that I was giving this unexpected marketing opportunity back to the nursery in exchange for the exceptional support they’d given me.

In all, I made four trips up to Lake Arrowhead, and I’m pleased to say that the installation went off without a hitch. Although you can see in the photographs that things need time to grow and fill in, we succeeded almost immediately in creating a lush, mountain environment that will provide an intimate, private space for my clients – especially when the conifers we placed along the property lines grow to maturity.

The one lingering concern is the streambed, which we haven’t been able to operate with the intended water flow. My clients and I have taken this on as a work in progress, with “tweaking” sessions scheduled on weekend visits I’ll be making through the fall and next spring. 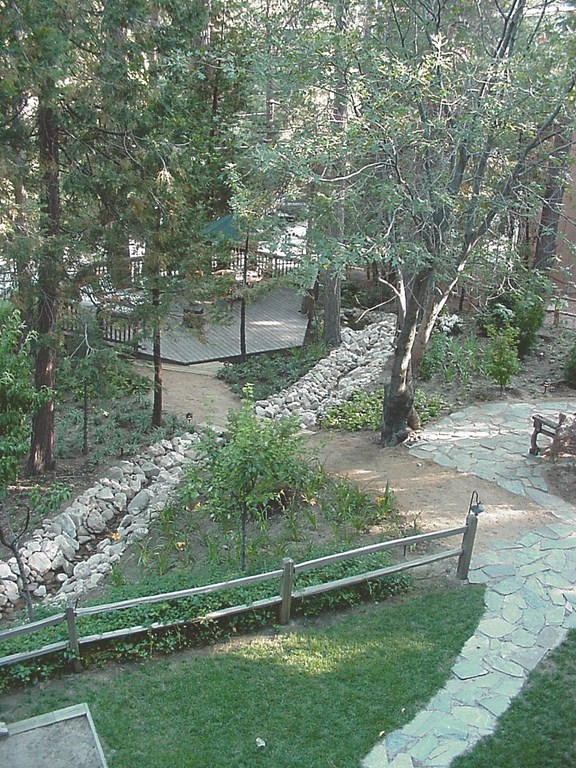 As much as my client’s pleasure is important to me, I’m particularly pleased with this project by the way things worked out with the nursery: It’s maintenance staff has been on hand to replace plants that died early deaths (less than two percent of the total number installed); they’ve also been there to adjust and fine-tune the irrigation system and the fertilizing schedule to deal with a few problem areas that developed.

This arrangement has distinct advantages, and I guess there’s a grain of truth to the observation that a contractor who is responsible for maintaining what he or she has planted will take more care in installation than one who simply plants and walks away. I’m not suggesting that these contractors aren’t conscientious: All I’m saying is that one who has the opportunity to observe the planting’s progress can improve the outcome over time.

Best of all, because the same company installed and is maintaining the property, they have a copy of and understand the original blueprints and are able to fix small problems or replace plants without my needing to drive two hours to help them. Any questions can be handled over the phone as necessary.

Of all the many lessons I learned on this project, however, probably the most important is the idea that design and construction really do go hand-in-hand: I was dependent upon the contractors, and they depended on me. If we hadn’t worked together throughout the design and installation process, I don’t see how we could have delivered results that proved so satisfying to my clients and instilled so much pride in the professionals who made it all work.