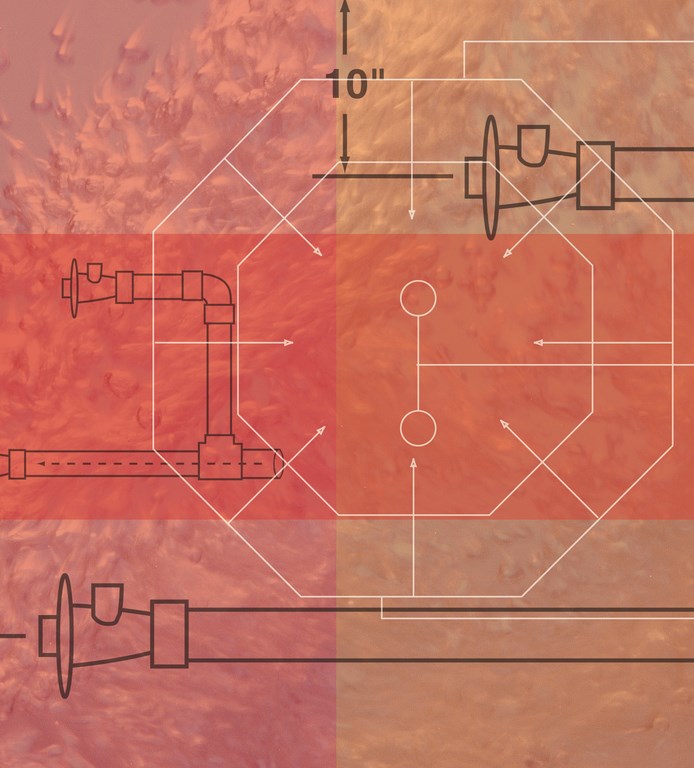 From pools, spas and fountains to streams, ponds and waterparks, effective watershaping is largely about the plumbing that makes these systems work. If you see things that way, says hydraulics expert Steve Gutai, there’s nothing more fundamental to success than making proper connections in the system’s plumbing lines, first time, every time, and piping joints that will bear up under pressure for the long haul.

It seems obvious that all watershapers would have a clear understanding of the materials commonly used in pipes and fittings and would know all about the primers and glues and mechanical approaches used to connect plumbing joints. That’s not always the case, however, which is whyI’m rarely shocked to see system failures that are the direct and inevitable result of improper plumbing connections.

It’s amazing to me that these connections haven’t been properly made, of course, but what’s even more amazing is that these problems often arise with installations where lots of good work has gone into calculating proper hydraulics and laying things out in efficient ways. None of that matters when the pipes start to leak!

Much of what follows should be familiar territory, but this issue of making proper connections is so important that no series of articles on hydraulic fundamentals would be complete without covering what it takes to join Pipe A to Pipe B. In approaching the subject, we’ll pare back to essentials, considering only materials commonly used in the residential watershaping market. We’ll also focus in on re-circulation systems (rather than gas or other peripheral lines) and thereby narrow the range of materials and techniques down enough that everything will fit comfortably in this one article.

For more than three decades, the plumbing of pools and spas and most other watershapes has been dominated by thermoplastic piping materials in the form of different schedules and types of polyvinyl chloride (PVC) and acrylonitrile butadiene styrene (ABS).

These materials (seen in Figure 1) are now so commonplace that it’s fair to say that most of us in the trade take their reliable performance completely for granted. Even so, understanding their basics is most helpful, especially when it comes time to make good plumbing connections. 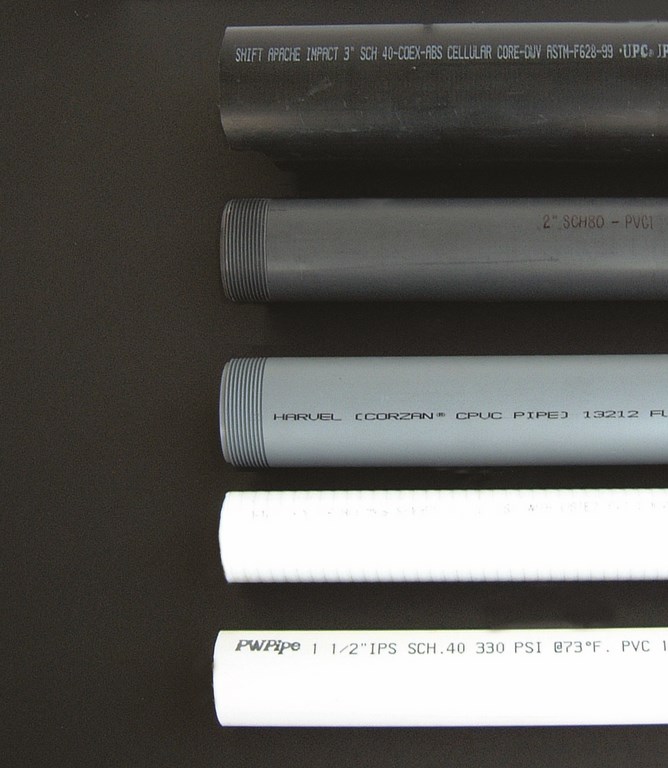 For starters, there are five common pipe types used for pools, spas and other residential watershapes:

[ ] Schedule 40 PVC rigid is most common among materials used to plumb backyard watershapes. This PVC schedule can handle water temperatures up to a 140 degrees Fahrenheit (60 degrees Celsius) and pressures between 125 and 200 pounds per square inch. (For specific pressure ratings, be certain to consult the pipe’s manufacturer.) Solvent welding or flanging are the primary techniques used to join schedule 40 PVC pipe.

Schedule 40 PVC has relatively low resistance to ultraviolet light, which can be an issue on some equipment-pad applications, but its relatively high tensile strength and elasticity make it stronger and more rigid than other thermoplastics.

[ ] Schedule 80 PVC is similar in characteristics to schedule 40, but it features higher pressure ratings and impact strength as a result of having thicker walls. It is also joined by solvent welding as well as by flanging or threading. For transitions to schedule 40 PVC – for example, at pool pumps’ suction and discharge ports – threaded schedule 80 PVC nipples are commonly used.

One important point to remember in using schedule 80 PVC is that the pipes have a lower carrying capacity because the pipes’ inside diameter is smaller, thus reducing water flow. That in mind, you should always consult a friction flow chart that corresponds to the piping material you are using to determine the material’s flow and head requirements.

[ ] CPVC (that is, chlorinated PVC), in schedule 80 for threaded adapters and in schedule 40 for pipe, is also similar in characteristics to PVC, but it’s designed to handle moving water at temperatures up to 180 degrees F (82 degrees C), making it useful for hot-water applications. The pressure rating for CPVC piping material is lower than schedule 40 or schedule 80 PVC, topping out at about 100 psi.

As with schedule 80 PVC, CPVC pipe is joined by solvent welding, flanging or threading, and threaded CPVC nipples are commonly used to make transitions from pool pumps’ suction and discharge ports to schedule 40 piping. Costs are different, however, with CPVC being considerably more expensive than either schedule 40 or schedule 80 PVC.

[ ] Schedule 40 PVC Flex is a non-rigid form of piping that’s particularly useful in cramped quarters, which is why it’s commonly used in the portable spa industry and has found applications in pools and other watershapes in certain parts of the country. (It’s important to note here that all plumbing materials used for the plumbing of inground swimming pools must be approved by your local health or safety and building department.)

Obviously, PVC Flex’s flexibility is its main advantage: It can significantly reduce the number of fittings required by rigid piping in the same application, and it can also take the high water temperatures associated with spas.

But PVC Flex is not always appropriate for underground usage, because it’s more susceptible to tearing and termite or rodent damage than are other thermoplastics. Cutting it also takes some care: You must be certain in doing so that you don’t cause the outside diameter of the pipe to flatten or go out of round, because this will significantly reduce the amount of sealing surface of glue joints.

[ ] ABS is most commonly used for drain, waste and vent applications and comes into play in watershape re-circulating systems if the project calls for a gutter system with gravity-fed lines that flow to surge tanks. The material is much like PVC – common, easily workable and readily available – and is commonly used in drainage applications because it works well in low-pressure applications. It’s also impact resistant and very durable, even at low or freezing temperatures, and can handle temperatures up to 160 degrees F.

Schedule 40 PVC is by far the most commonly used pool-plumbing material these days: It is lightweight, inexpensive and easy to use and can be purchased in rigid or flexible forms across a wide range of diameters. In addition, its durability, resistance to corrosion and ability to handle heat are all factors that contribute to the expanding popularity of this pipe type in recent years.

One point to consider is that PVC is so adaptable a material that it is also used successfully in setting up such things as electrical conduits, drainage systems and venting. It is important to note that pipes specifically labeled and intended for these other applications are not suited for use in water systems. As an example, schedule 40 electrical pipe or conduit is not approved for use on water systems. That may seem an obvious point, but it surprising how often mistakes are made and the wrong material is used.

With everything laid out and the pipes all trimmed to the right lengths and cleared of any burrs that may have resulted from cutting, it’s time to focus on a bit of pipe-joining technique.

For the most part, watershape re-circulating systems are connected through a process known as solvent cementing. This is the most common method of joining PVC and ABS pipe to fittings made of the same material as the piping – elbows, tees, manifolds and more. Done properly, this method provides a chemically fused joint that is the key to overall system success. 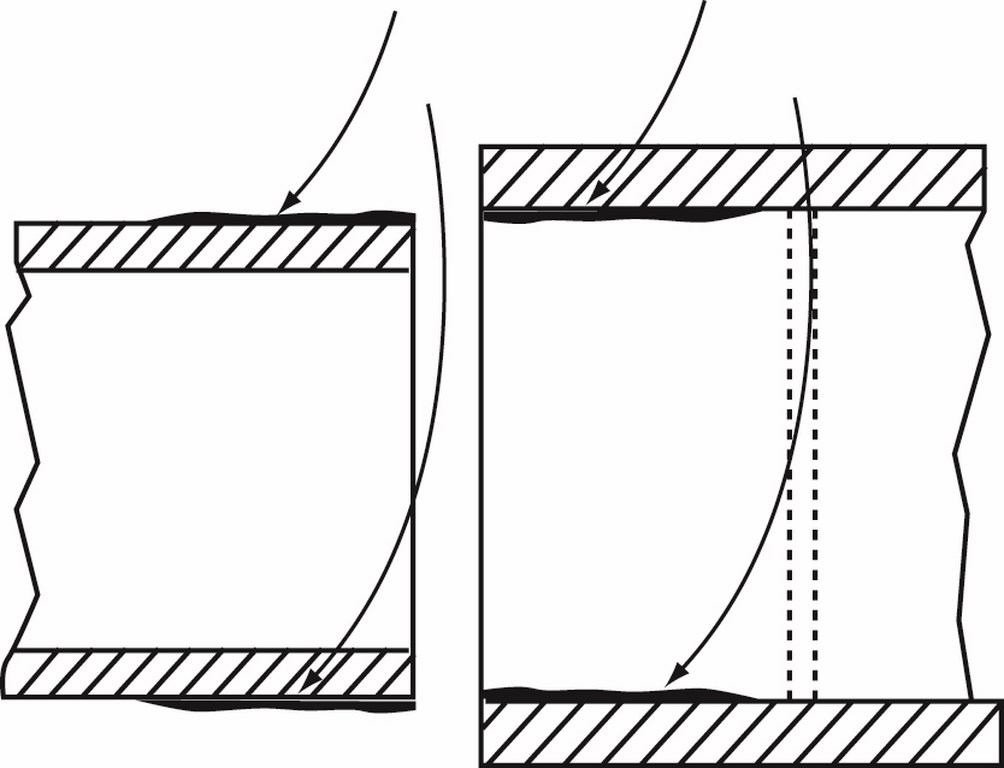 All it takes to ensure good, leak-free glue joints is following a few simple rules of thumb:

* The surfaces to be joined must be cleaned

* An appropriate primer must be used to soften the pipe 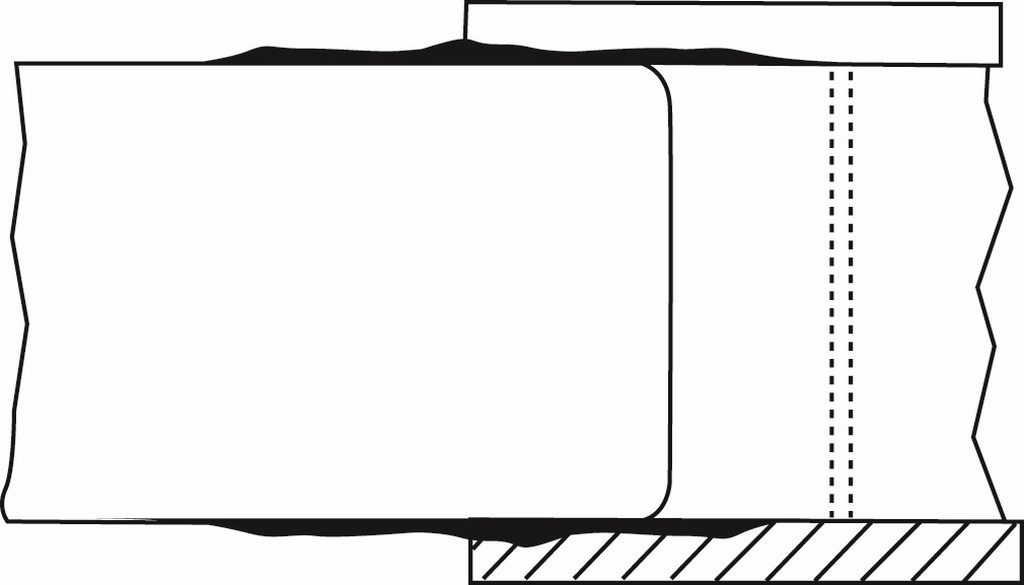 * The glued assembly should be held in place until the glue is set (Figure 4 below). 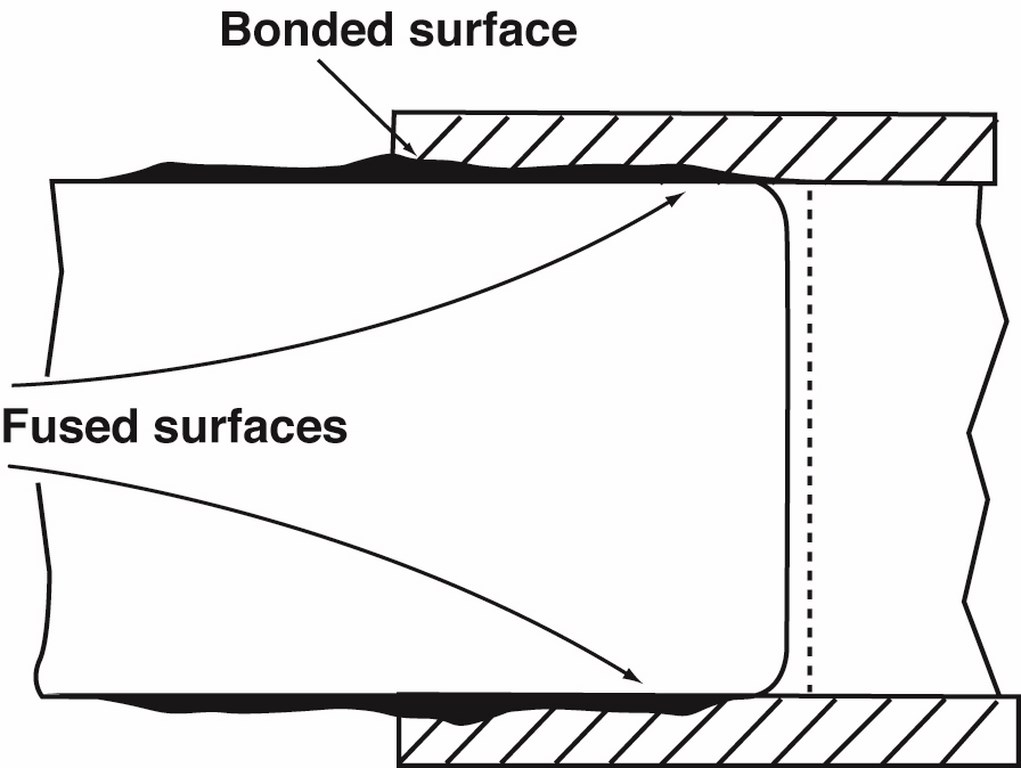 That last point is particularly important and is the place where most problems will arise. Holding the components in place prevents the pipe from creeping out of the joint as the adhesive completes the fusing process. That fusing process is the source of the joint’s strength and should not be compromised by any movement among components.

This is also why it is best, whenever possible, to work on one joint at a time. It limits the possibility that any twisting or pulling or creeping will disturb the fusing process.

GOOD AS THE GLUE

Of course, good technique can never make up for the fact that you’ve chosen the wrong adhesive to make your connections. Even though it seems like a straightforward issue, great care should indeed be taken to obtain and use the proper glue for the given materials and application.

To do so, you must know the pipe material and its schedule, the maximum pipe size and the set time (the larger the pipe, the longer it will take to set). Depending on where you live and the time of year, you must also think about relative humidity, varying temperatures and, in some cases, the pressure performance of the adhesive in making your choice. In other words, it’s always the application that matters.

As mentioned above, most re-circulating systems are connected entirely with solvent cementing, and that’s what we’ll focus on here.

In brief, however, flanging and threading are used mainly in making connections between dissimilar materials. For their part, flanges are used most frequently with larger pipe diameters to connect the pipes to commercial pumps, butterfly valves and other large fittings.

The connections known as unions are basically the same as flanged joints, except for the fact that they join two pipes using a threaded union and nut, where flanges are typically bolted together. In setting up either flanges or unions, you need to know the materials you’ll be gluing and, if you’re making connections to a pump or a filter, select the appropriate threaded adapters or nipples to get the job done. 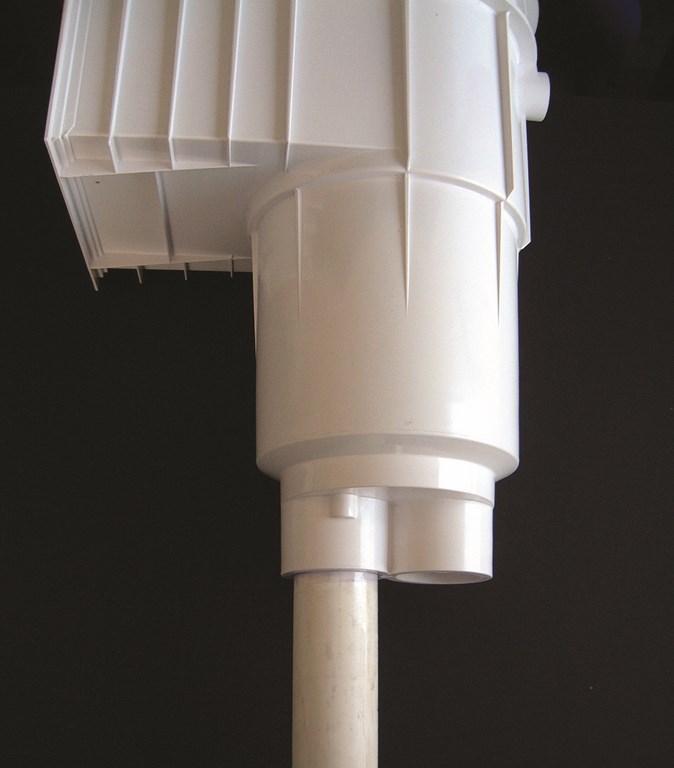 For bonding these like materials, such as PVC pipes to PVC tees, adhesive suppliers offer a good range of easy-to-use, quick setting glues specially formulated for pool and spa plumbing. I’ll use IPS Corp. and its Weld-On line of products to illustrate, but products made by United ElChem (Pool-Tite) and others are comparable and widely available.

* For most general-purpose applications with PVC, Weld-On 711 and 717 are appropriate – 711 being a high-strength, heavy-bodied, fast-setting gray glue and 717 being similar but with a slower, medium set time that makes it easier to use in humid conditions. In both cases, the materials to be glued should be primed with P-70 primer.

* For repair work or on jobs requiring quick pressurization, Weld-On 725 (or the equivalent) is a good choice. It works especially well in wet areas.

* For CPVC pipe, Weld-On 714 (or another, similar product) gets the job done. It’s a medium-set glue that can be used for pipe up to 12 inches in diameter.

* For bonding PVC Flex to rigid pipe or fittings, select Weld-On 795 or the equivalent.

* For ABS connections, use Weld-On 773 or 771. Both glues are semi-viscous, medium-bodied, fast setting glues that can be used in temperatures ranging from 40 to 110 degrees F.

Transition joints between dissimilar materials are perhaps the most difficult when it comes to finding the right solvent. PVC-to-ABS connections are quite common (Figure 5 above), particularly at the bottom of skimmers. In these cases, go with Weld-On 794 or 793 or the equivalent – and be mindful that these adhesives are not recommended for ABS-to-ABS or PVC-to-PVC applications.

PVC- to-copper connections (Figure 6) and PVC-to-galvanized iron connections are common in retrofits where old plumbing is matched up with a new skimmer, for example. There are various ways to properly seal these connections, the most common being a wrapping of Teflon tape on a threaded joint.

The beauty of making good plumbing connections is that it’s not all that difficult, so long as you know your materials, their proper applications and the correct primer and adhesive types. Taking care of business here gives you peace of mind that the hydraulic system won’t fail needlessly, freeing you up to worry about the more enjoyable fine points of watershaping.

Steve Gutai is Director of New Product Development, Hydraulics and Heating Systems, at Zodiac Pool Systems, Vista, Calif. He may be reached at [email protected]