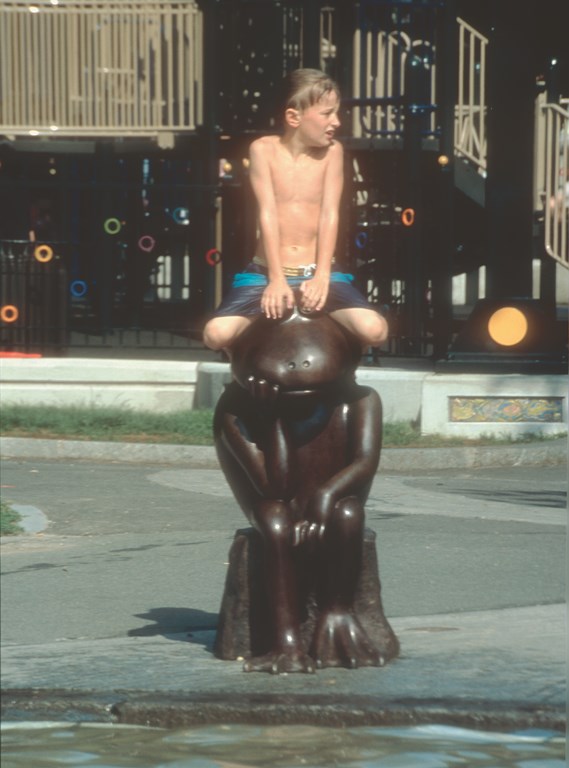 Founded in 1634, Boston Common is the oldest public park in America – a significant and historic public place. It is familiar to us as Bostonians, of course, but we’ve also been privileged as a firm to have worked there before, when we renovated the park’s main watershape, the Frog Pond, to serve as a splash pool in summer and as an ice-skating rink in winter.

During the pond renovation, we learned that tackling projects in such storied surroundings can be a tall order. For example, we had to place all of the pond’s chillers and pumping equipment underground to mask any obvious intrusion on the 17th-century space. As we approached a second major project – this time the renovation of the park’s playground – we knew going in that those who hired us were keenly sensitive to the nature of the place and came armed with preconceptions about colors, images and what would be “appropriate” for the setting.

To keep things moving, we worked very closely with the city’s Historic Commission in establishing the color palette, procuring artwork and developing an overall plan that would result in a space that was attractive and safe for children and suited to the surroundings. To be sure, the negotiations were intense as we expressed our desire to deviate somewhat from convention with, for example, fencing that included playful bubbles of color rather than the traditional wrought-iron Victorian-era bars.

That’s just one example of how we stretched the boundaries of their playground concept and how it would fit into the context of the park. It wasn’t always easy, but the outcome has made the hours of discussion both worthwhile and rewarding.

The playground area had been part of the park for many years but had fallen into disrepair. The concept of renovation had in fact been circulating for many years, but nothing took flight until early 2002, when an anonymous donor stepped forward and funded the project with a contribution of close to a million dollars.

(The donor’s identity will remain a mystery to all but those who worked on the project; we can say, however, that the monies came from a well-known local family which has devoted a great deal of its resources to education and programs for inner-city children.)

This generous gift enabled the city not only to begin renovation of the playground, but also to pursue much more ambitious plans for the 5,800-square-foot space than would have been possible with a more-limited budget. In addition to the usual array of playground amenities, for example, the plan expanded to include bronze statuary, a modern play structure, a special rubber play surface, tile mosaics, the above-mentioned colorful fencing, a main gate and three small waterfeatures. 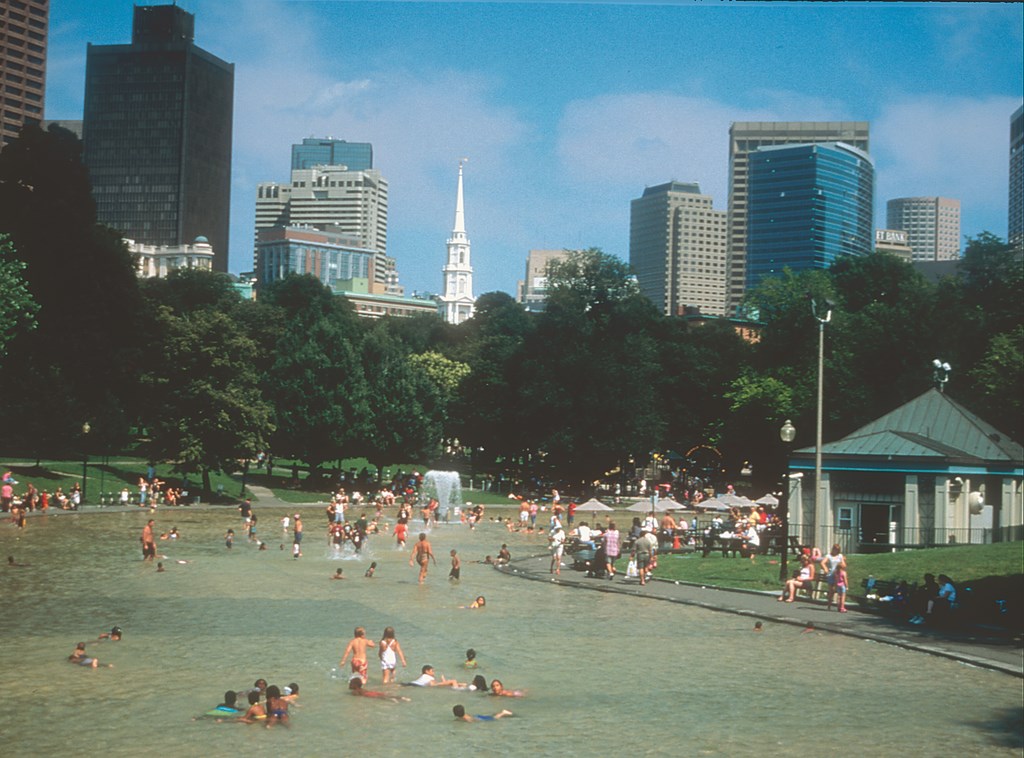 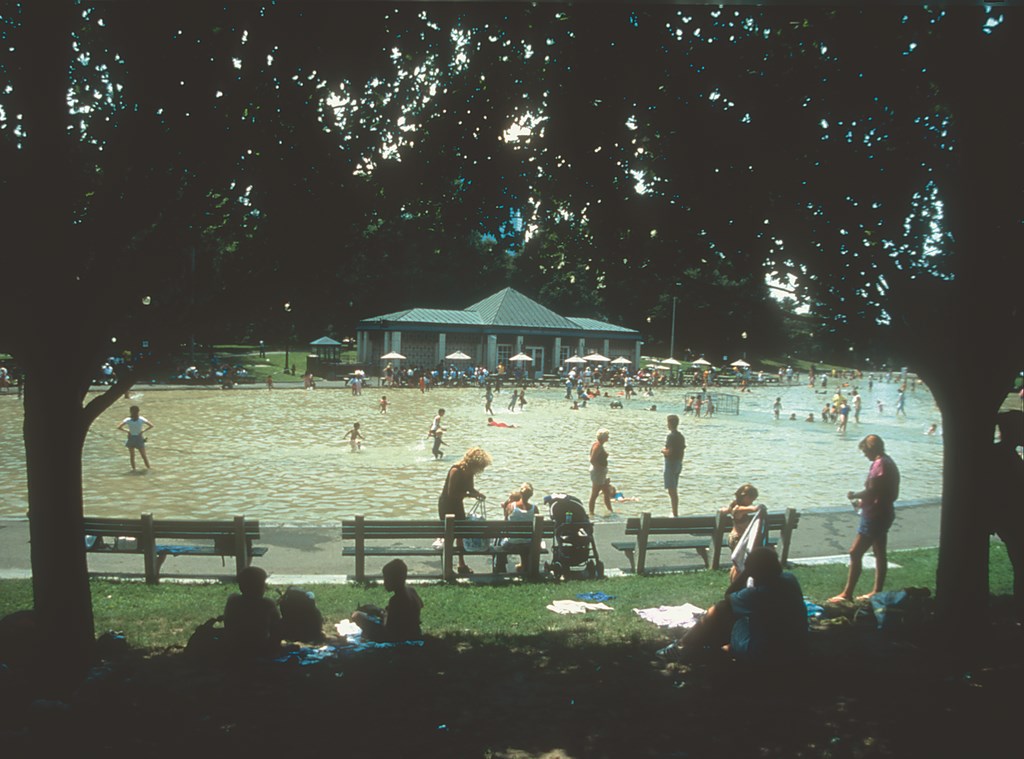 At the donor’s urging, the project was placed on a fairly fast track and was completed in the nine months after we came on board in preparation for dedication ceremonies in November 2002.

The playground stands just a few steps away from the edge of the Frog Pond, and we saw from the outset the opportunity to tie the renovated area to the pond, aesthetically and thematically. The Frog Pond itself has become a magnet for families in the city and surrounding areas – and particularly for teens. In some ways, in fact, the presence of the pond has shifted the chemistry of the park from that of a stodgy Yankee sanctuary to a higher-energy, family-oriented fun spot.

With all of us seeing this transformation take place, we were able to persuade the Historic Commission to develop a much more contemporary design for the playground.

When we worked on the Frog Pond, we’d envisioned using frogs as water-spray elements. At that time, the Historic Commission had resisted using anything so whimsical in the historic landscape. But now, with the space being used by many more families and children than ever before, the commission expanded its interpretation of the park’s potential to a point that allowed us to consider some fresh approaches.

We were quite happy to revisit our previous ideas and resurrect the frogs – and this time the Historic Commission agreed. We were pleased to confirm that we’d been on the right track all along, with the result that the park – and especially this area within the park – has become an even more compelling attraction for children and families from all over the city. 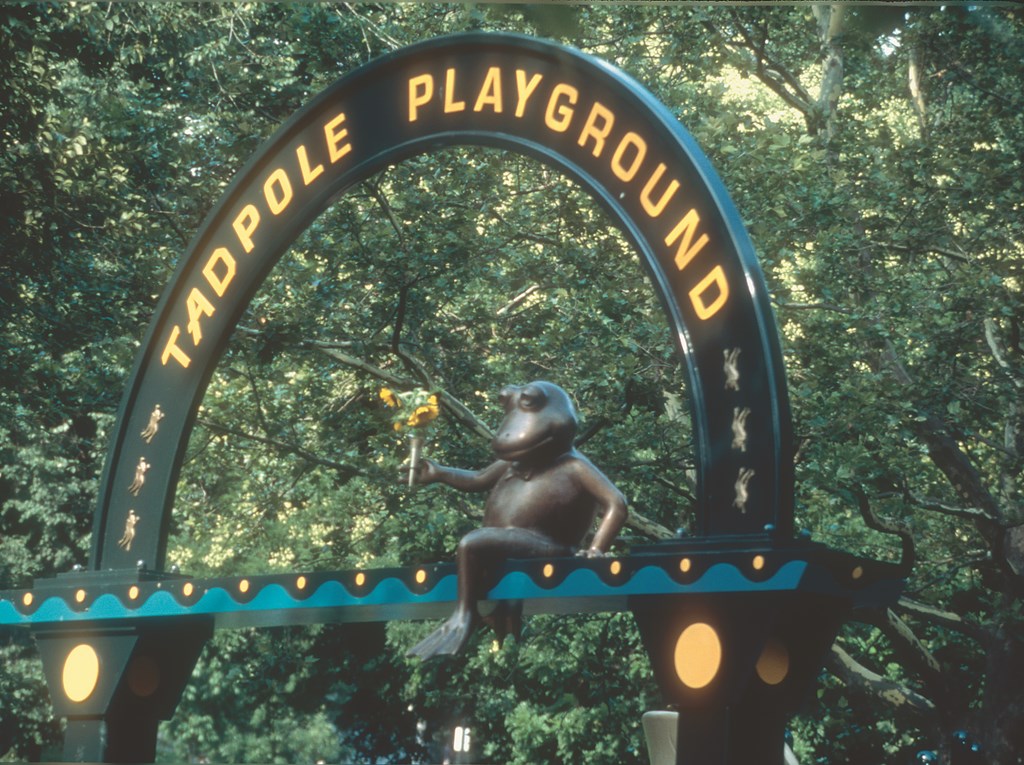 The fact that the park is drawing people from a larger area is an important point: Before the pond renovation, Boston Common was generally a very local attraction mostly of use to those who lived within easy walking distance or traversed the park on their ways to and from work. Now, however, the park has city-wide appeal and has begun to live up to its full potential as a gathering place in the heart of the city.

Indeed, the combination of the renovated Frog Pond with the Tadpole Playground has changed the “diagram” of how and why people move within the city. On any given day, there’s tremendous diversity among park users, and because people are there to have fun, it has served in many ways to bring the city’s far-flung neighborhoods closer together.

In setting up the playground, we worked in anything but a vacuum. We sought input from a wide variety of community sources and devoted a vast amount of time and energy to synthesizing that feedback into a design vision that could be realized in direct, physical forms. 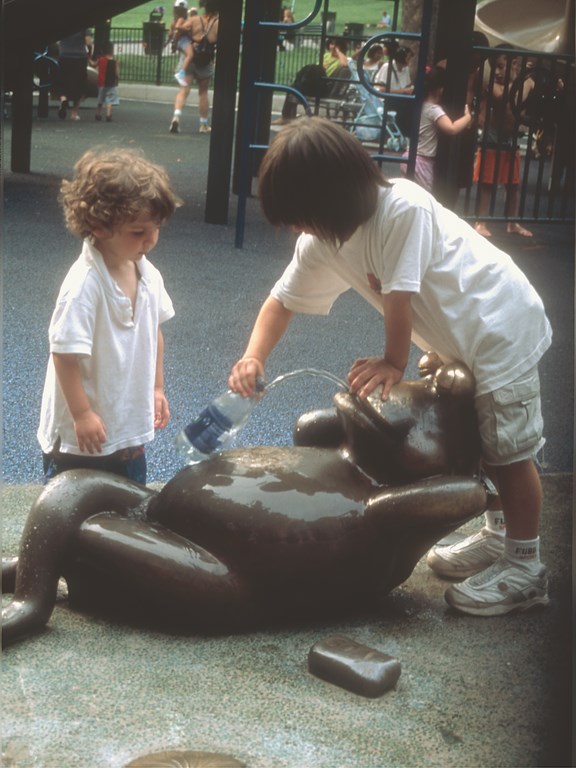 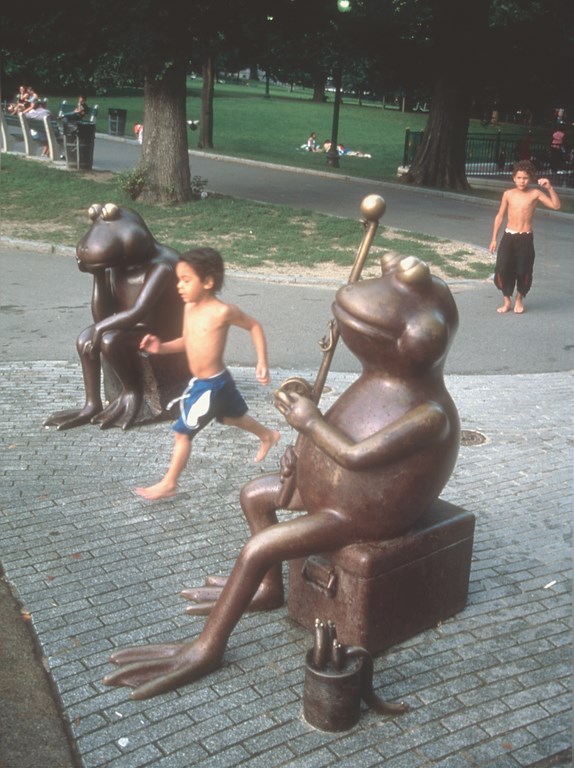 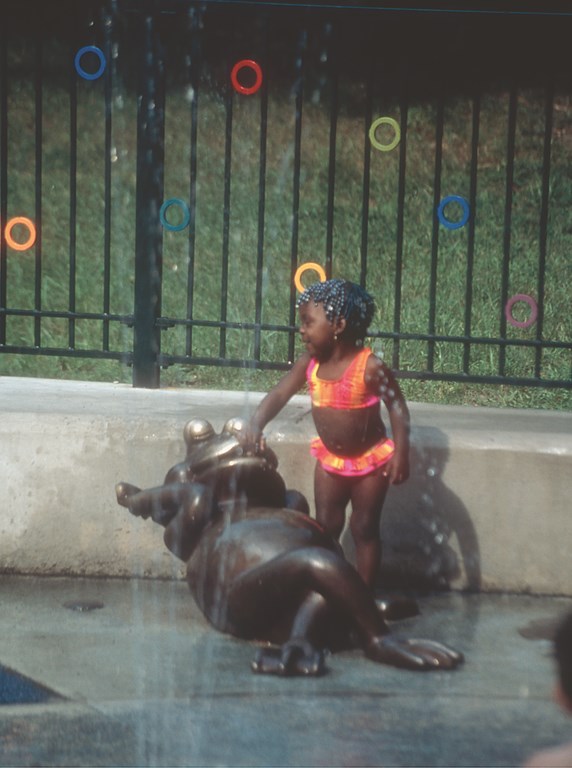 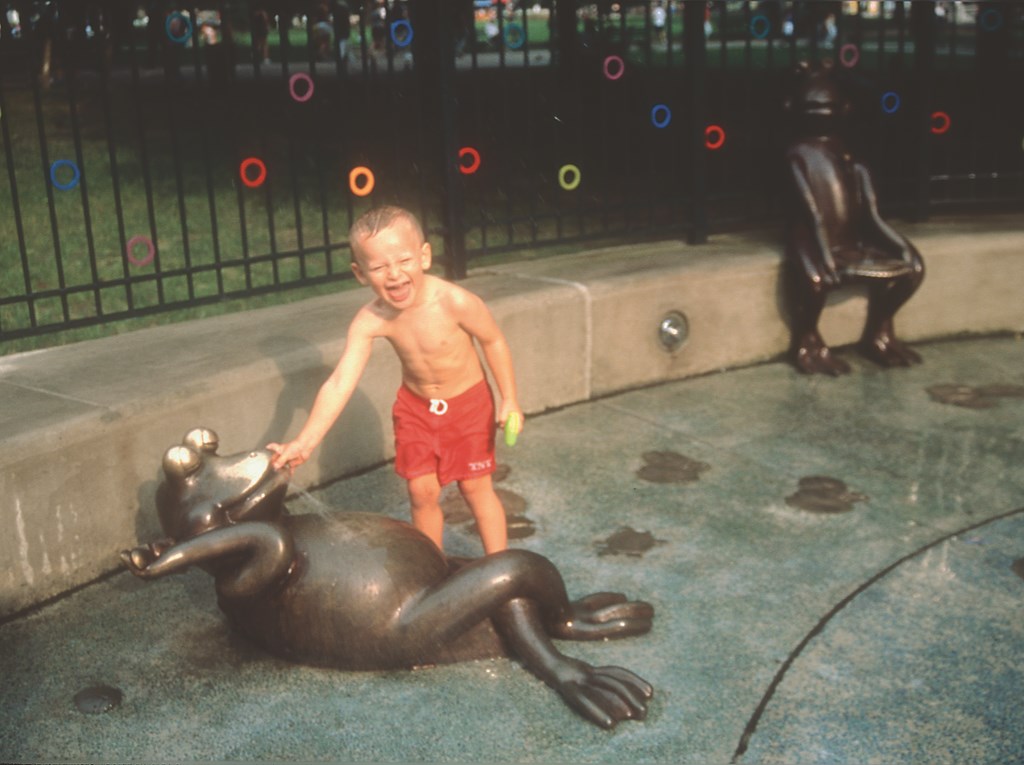 From the start, however, colors were a sticking point. The notion that bright colors could be integrated with the Commons’ classic black fencing and majestic Sycamore trees didn’t instantly capture the imaginations (or approval) of the Historic Commission. We urged them to keep open minds and to watch the project unfold; as they did, they gradually became more comfortable with the idea of a lively color palette.

The base color is “Boston Common Green,” with which we were familiar through our work on the Frog Pond’s structures and ironwork. We accented it with vibrant primary colors throughout the fencing and on the rubber surface, tile mosaics and play structure. Although the brighter colors are prominent, they were not overused and are mainly there to add a little “sparkle.” The result is an upbeat, lively space that fits well within relatively serious surroundings.

The generosity of the donor made possible the defining features of the playground – the aesthetic elements that lend the playground much of its idiosyncratic character.

During the artist-selection process, we worked with a Boston-area organization called Urban Arts, which maintains a registry of slide photographs of works from a variety of artists. Before we began, we identified the various media we wanted to see and, in all, reviewed about 100 artists’ works before selecting ten finalists for meetings with us and various city officials.

As it would turn out, the painted iron fencing and gateway were designed in-house by our staff. Beyond that, however, a stellar trio of artists were brought into the project: Scattered all around the space are bronze frogs created by local sculptor David Phillips along with beautiful tile mosaics by artist Lilli Ann Rosenberg. There are also three froggishly illustrated panels mounted on the fences that resulted from the collaboration of artist Mark Cooper and children at Citizens Elementary School in Dorchester, Mass. 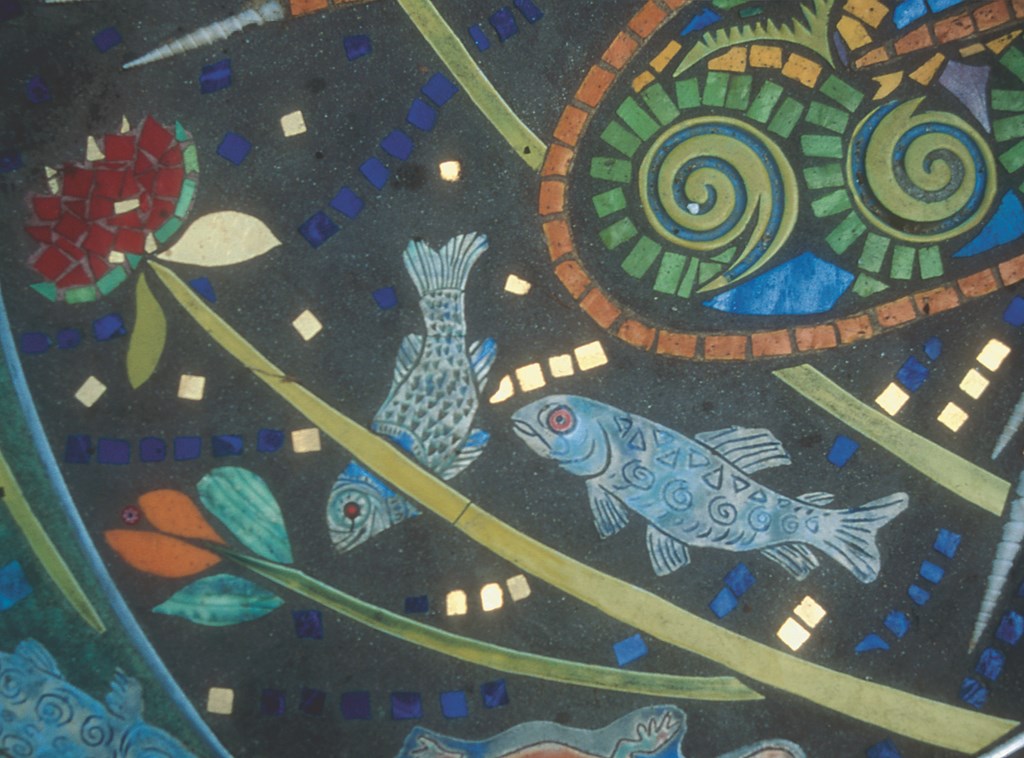 The frog sculptures display a range of personalities: A fisherman frog and a thinker frog sit just outside the playground near the Frog Pond, for example, and you’ll see a snorkeling frog, a lifeguard frog and a sunbathing frog in the waterfeature area. There’s also a gatekeeper frog who keeps watch atop the gateway arch.

The artist has been quoted as saying that each frog displays a certain “comic sophistication,” but whatever it may be, the frogs have been a smash hit with children and already show the special patina that could only come with kids’ climbing all over them.

Phillips was also responsible for a series of bronze lily pads mounted in the decking in the fountain area, while the ceramic-tile mosaics by Lilli Ann Rosenberg feature colorful images of tadpoles, frogs, plants and insects that might easily be associated with a pond environment.

In addition to the artworks, we carefully reviewed and selected the play structures and resilient rubber flooring system for the play space. GameTime of Fort Payne, Ala., provided the play structures. We felt comfortable with their ability to design, fabricate and install a large, interactive play structure for kids in the 5-to-12-year-old range. The play surface was provided by Amityville, N.Y.-based Child Safe Products, which proved to be similarly responsive and helpful. Both companies made key contributions related to safety and aesthetics.

In keeping with the Frog Pond and the space’s generally amphibious theming, water is a key feature in the Tadpole Playground. But the waterfeatures have deliberately been kept small, a design decision that stemmed mainly from the fact that we wanted them to be fully accessible to the smallest of the park’s users. As a result, the water flows are quite small and understated. The skin-diver frog, for instance, shoots a stream of water out of his snorkel, while the sunbathing frog spits water from his mouth. There’s also a small, interactive deck-level sprayer controlled by a push-button valve mounted nearby: It covers just 385 square feet, but it’s become a beehive of activity during the summer months. Again, the water flow is low here – so low, in fact, that city codes allow us to use city water and existing water pressure to drive the fountains.

There’s no recirculation system or filtration of any kind: Water flows into the fountain through a control box that contains back-flow controls, then on to the fountain nozzles. There’s a circular drain at the center of the exposed-aggregate decking, and the fountain’s water simply flows away.

These modest waterfeatures and their low flow rates contrast dramatically with the large vertical spray at the center of the Frog Pond, where the jets can reach 85 feet into the air if so desired. The contrast has a purpose: The big spray draws off larger kids and playful adults who want to cool off, but it’s not so attractive to smaller kids. In other words, while the waterfeatures of the Tadpole Playground are modest, they are deliberately so to enable younger kids to get in on the “action.”

The results have all been positive. Most days, and even when the weather’s cool, scores of children are seen taking advantage of the space and happily interacting with the permanent amphibious bronzes and other elements. As Bostonians ourselves, we’re thrilled that the playground meets an important need of the city’s children while staying true to the historic setting of Boston Common.

John Copley is founder and owner of Copley Wolff Design Group,a landscape architecture firm in Boston. With extensive experience in site planning, design and implementation of projects throughout New England, he has been responsible for a wide variety of award-winning spaces, including streetscapes and urban design projects noted for a special sensitivity to design and detailing consistent with historical contexts. He is actively involved in all phases of the business, from office management and community involvement to project management, design and construction. Lynn Wolff has more than 20 years’experience in planning and designing for public and private clients and is a registered landscape architect in Massachusetts and New York. Her speciality is complex urban projects requiring expertise in management for multi-disciplinary project teams, multiple clients and extensive cultural, historical, public-art and public-participation components. She often collaborates with outside design professionals, artists,government agencies and non-profit neighborhood groups to design public spaces that successfully reflect the diversity and cultural richness of their surroundings.