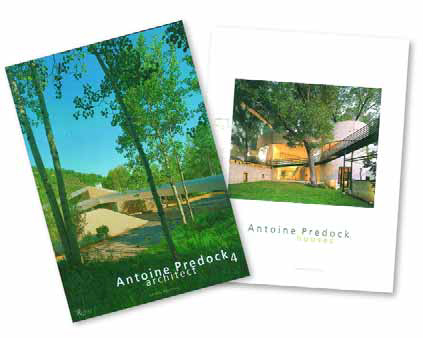 For years now, we’ve all heard that consideration of a site and its surrounding environment is one of the things that separates the average from the truly great projects. For my part, as I’ve grown as a watershape designer, I’ve found this simple concept carrying more and more weight in my work.

With that site-driven value system somewhere in mind, I recently came across two books that provide some of the most compelling examples of this approach I’ve ever seen.

It all started when I read a newspaper article about architect Antoine Predock, the 2006 recipient of the

Inspired, I headed to the bookstore and was happy to find two (among several) books by Predock, determined to discover what had elevated him to such vaunted company. The first, Houses 3 (Rizzoli, 2000), covers a dozen of his early commissions – all residences found mostly in the American southwest.

Although the 208-page, beautifully illustrated text is predominately project profiles, it’s clear by simply looking at the photographs that Predock is a master when it comes to using all aspects of a site. The result is modern, organic architecture that’s as creative and stunning as any I’ve ever seen, filled with echoes of Wright, Ricardo Legorreta and John Lautner but revealing Predock’s own unique flair in using windows, stairs, courtyards, walkways and wildly creative geometries to link built spaces with their surroundings.

He’s based in Albuquerque, N.M., so it comes as no surprise that he demonstrates a profound affinity for desert environs and uses views, sun exposures and even the wind as key design factors. It also bears mentioning that he uses water in one form or another in almost every project – often to stunning effect.

In that sense, the book is a welcome source of ideas, with its highly sculptural fountains, artful reflecting ponds and highly crafted swimming pools – many of which link interior with exterior spaces. For the most part, he deploys water in a distinctly sculptural way, using basic shapes, materials and reflections to make striking yet subtle statements. From a watershaping perspective, it’s truly the stuff of genius.

The second book, Architect 4 (Rizzoli, 2006), explores Predock’s philosophy as well as more recent projects – most of which are commercial and institutional. I could go on for pages describing his mind-bending designs, but there are some things best left to your initiative. Instead, I’d like to conclude with a quote from the book that I found to be particularly insightful and inspiring: “When a building is only program driven, it’s merely a functional diagram. Without the admixture of spirit, it becomes a body without a soul.”

To my eyes, it seems clear that the soul of his work most often resides in the beauty of the space that surrounds it.