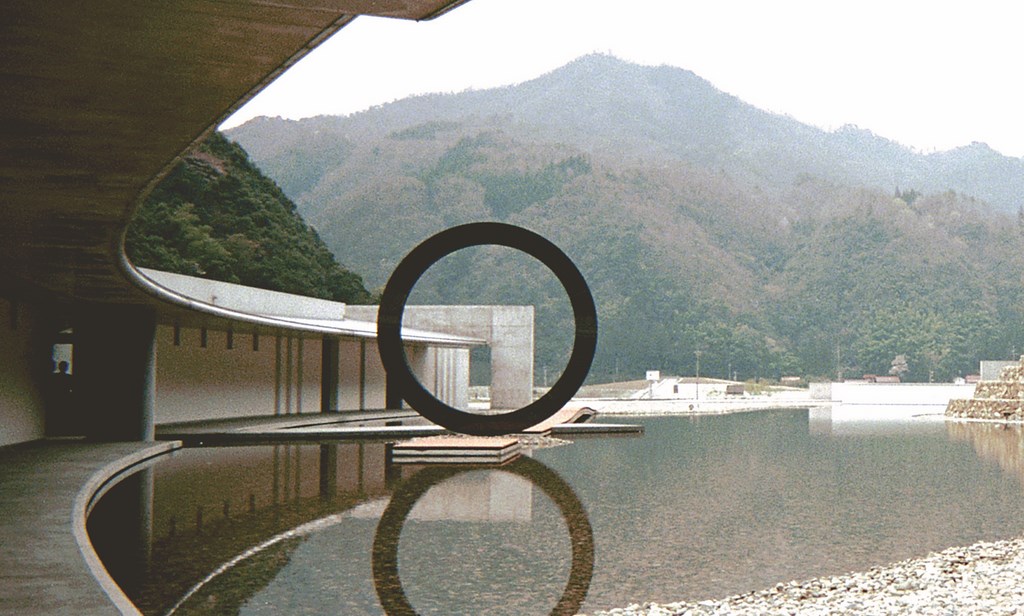 The Light and Space Movement first emerged in the beachfront community of Venice, Calif., during the 1960s, when a group of artists collectively began to explore and redefine the way art was observed and appreciated.

Leaders of the movement – painter and sculptor Eric Orr; Robert Irwin, who later designed the gardens at the Getty Center in Los Angeles; and environmental artist James Turrell – started by breaking down the transformative processes of art and minimalism, defining the character of their movement through its barest components of light and space. In a great creative rush, they explored the ways light affected spaces and how light could transform our perception of things within those spaces.

The result with Eric Orr was not what one would consider “decorative art” in a conventional or traditional sense. In fact, his art is devoid of any ornamental forms. I worked closely with him for seven years before he passed away in 1998; since then, I have faithfully carried on in his tradition and sought to bring his approaches, philosophy, shapes and sensibilities to a new generation of observers.

To do this, I have focused particularly on the ways Orr used water to interpret the spaces he established and how he saw it as a means for accentuating dramatic yet simple forms within those spaces. The results are waterfeatures and water sculptures that communicate with the observer on a primal, neutral level with a tranquil, spiritual nature.

In its purest, simplest form, the minimalist elements of Light and Space art are impossible to capture in words. How can one, for example, persuade another to understand the concept of pure, empty space in a work of art? Although it may not be literally possible, the goal of the Light and Space artist is nonetheless to explore these ideas and bring the observer as close as possible to experiencing concepts of transformation, purity and simplicity.

Under my guidance, the doors of Orr Studio, founded by Eric Orr in Venice, have remained open, and we now work with a far wider range of architects, landscape architects and interior designers than perhaps Orr would ever have imagined while designing and executing waterfeatures and water sculptures for contemporary settings based on his approach and philosophy. In essence, one could say that his movement has now stepped beyond the boundary of fine art and sculpture to become an integral facet of contemporary design.

In this way, what I do today as Eric Orr’s spiritual heir is an extension of his work, reaching beyond galleries and collections into a broader, appreciative world. The difference is, where Orr was a self-driven artist who blazed his own trail, we at Orr Studio see our current work as a service to our clients and our waterfeatures and water sculptures as forms of art that fit uniquely and appropriately within established spaces.

Those forms are simple – for example, water flowing over surfaces within a vertical rectangular shape – and do not challenge the observer to “understand.” For us to be successful, the ways water is used to accentuate the forms must be beautiful enough to engage the viewer and remain approachable.

To preserve the transformative and minimalist nature of our works, our “building blocks” of geometric shapes, light, water and, at times, fire and/or fog are simple, yet visually appealing. These basic expressive units are accessible to people regardless of age, culture or ways of thinking, and indeed reach out to what Carl Jung refers to as the “collective unconscious” – a level of innate, unspoken and thoroughly primal understanding of forms and ideas.

I think of this innate connection as the difference that has kept the Light and Space Movement vital since it first emerged more than 40 years ago and has given the movement its enduring value. Minimalist and transformative ideas and forms have been used in different ways through the years, yet because they are simple and beautiful, they reach across the eras and remain contemporary.

I cannot emphasize strongly enough the importance of water in making our pieces accessible, interactive and attractive. Even the smallest flow will draw the observer in and offers a source of subtle, yet constant change. I believe this to be the perfect contrast or foil to the stark, simple geometric shapes we use in our watershapes.

We use much less water than is to be found in most other artistic watershapes. Our hydraulic systems are small and simple, yet quite precise with respect to flow and distribution over a sculpture’s surface. The way we establish and define spaces and set up shapes and water flows give our installations all of the drama and interest of larger, more elaborate projects that use much more water. It’s partly the spirit of minimalism, but it’s also our sense that water preservation and conservation are important and that water is a precious resource that must be treated with care and respect.

Equally important, the small flows of water in our features and sculptures convey a desirable sense of tranquility – not surprisingly when one considers that Eric Orr followed a Buddhist philosophy, as do I.

This meditative quality was present in Orr’s work from the beginning, but our approaches have evolved and the Studio now works with a wider range of materials and shapes than Orr did originally. Orr himself preferred darker surfaces, but since his passing, the studio has branched out to include many lighter colored materials that we feel are less stark and more accessible.

That last word is the key: Orr Studio’s current work is about making minimalism and the tenets of the Light and Space Movement accessible to more people in a wider range of settings. That’s our continuing mission and goal. 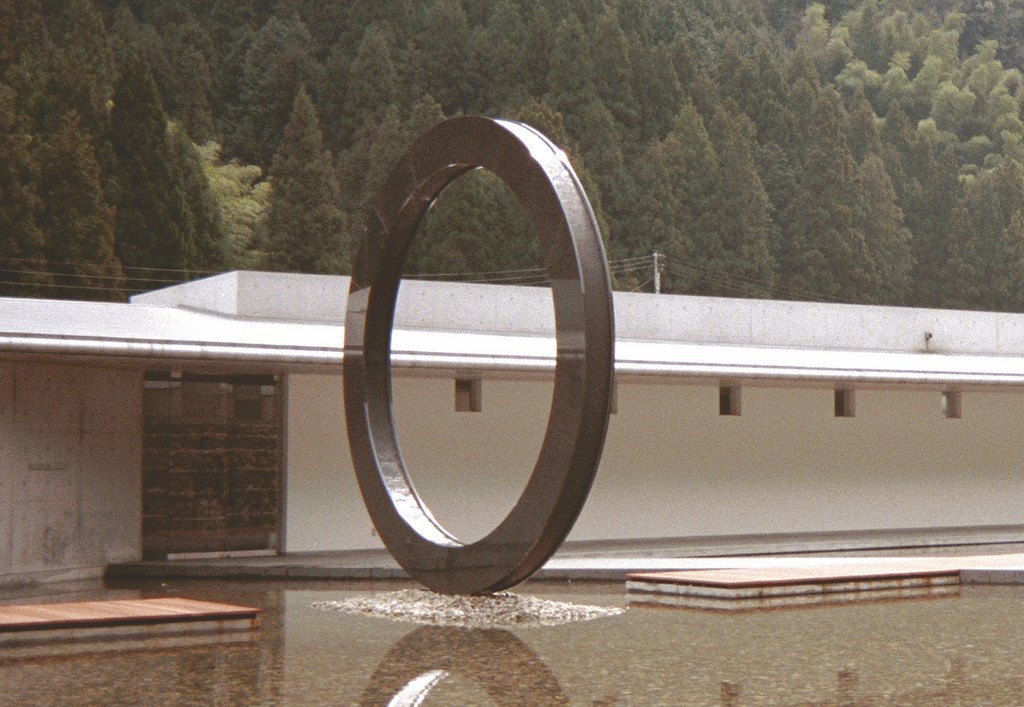 Known as the Archimedes Gate, this piece was commissioned by The Water Museum of Shimane, Japan, and is crafted of polished black granite faces set up with curved copper channels along which the water flows on the outer and inner surfaces of the ring. The small flow of water over the sculpture becomes apparent only when the observer comes close, commenting in a subtle way on the physical relationship between the museum and the mountains beyond. 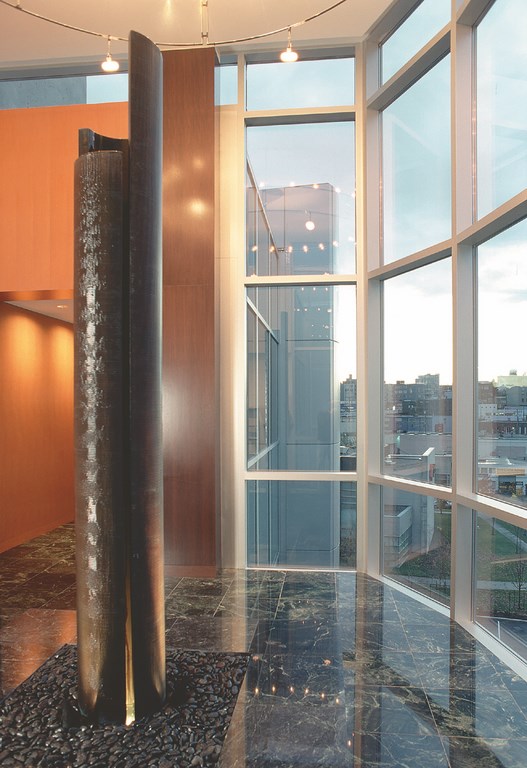 This project consists of three convex columns that describe a circle. But each column has a different height, so there’s a forced, interesting interplay of vertical geometry – almost as though the forms are growing and differentiating themselves around a fixed, central core. In addition, there are two different textures, ridged on the outside and smooth on the inside, so the water flows more quickly down one side than the other. 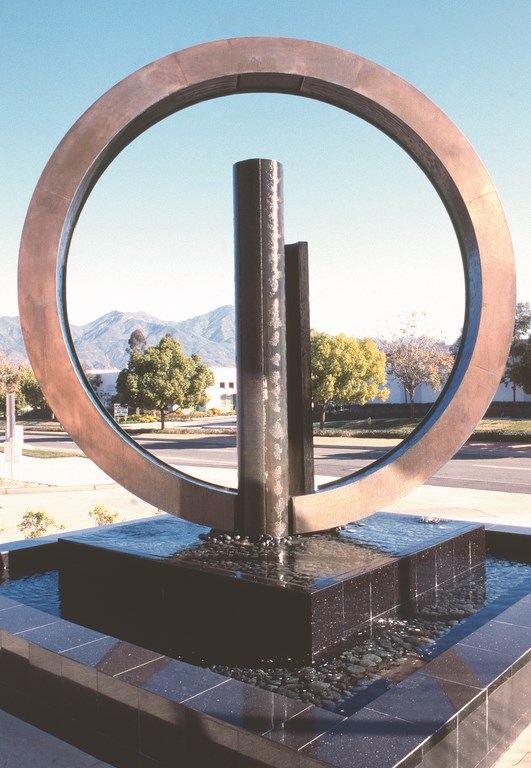 In this case, we worked with a landscape architect to develop a design in which a copper ring interacts with two curved, concentric columns – a visual effect not dissimilar from the one seen with the Archimedes Gate. My own preference for ring sculptures has to do with the way they work with natural landscape, but here it works quite well in urban surroundings. The columns are the key, adding dimension and interest to the design that suits it well to its architectural setting. 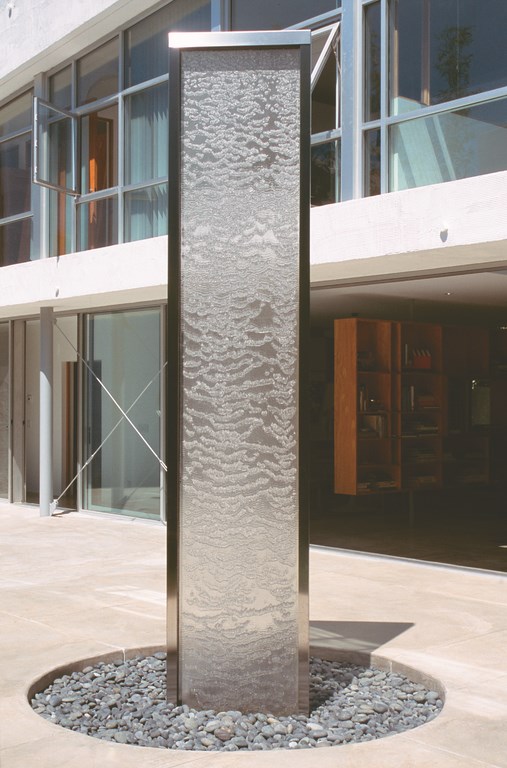 Several of our projects are best described as ‘water veils.’ Eric Orr began working with this effect in about 1993, and it involves flowing a sheet of water over a very fine screen. From just a few feet away, you completely lose the screen visually and instead get a sense of water flowing slowly through thin air. We’ve completed a number of projects since that are based on this basic idea. 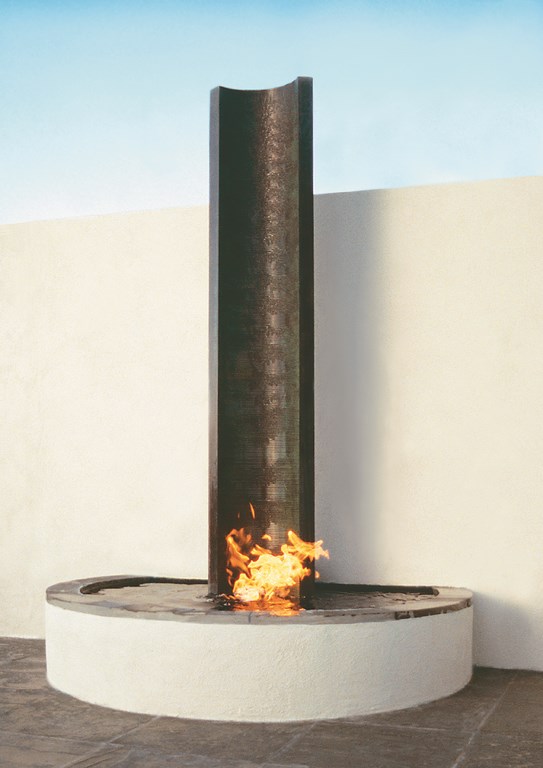 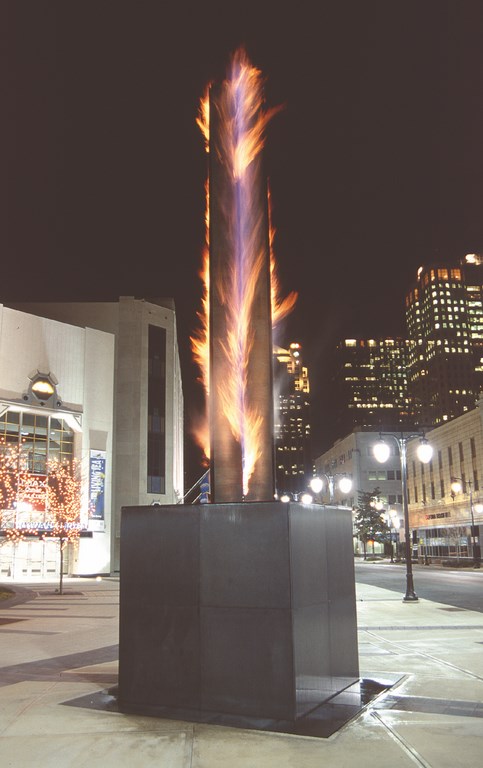 Fire can be a spectacular tool for minimalist art, as shown in these two projects. In one, three panels have been set up with flames crawling up each surface. The panels form a triangular column that sits on a granite pedestal covered in water, and we’ve played with the steamy potential of their interaction by introducing fog at the center of the column. In the other, a fire-and-water sculpture set up as a hearth marks a home’s key outdoor gathering place. The curved sculpture stands in a dark pool of water, and flames erupt from the pool’s center in exciting contrast to the flat, dull pool. The curved shape serves a practical purpose by protecting the flame from prevailing winds. 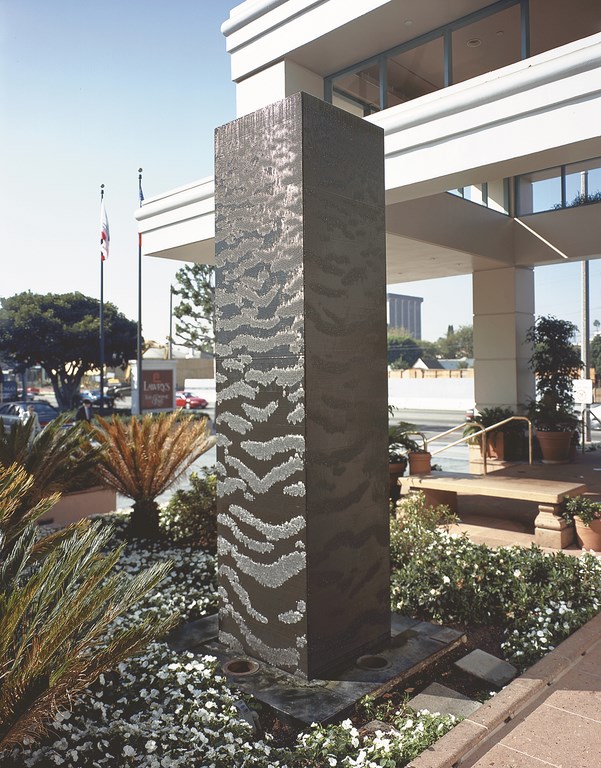 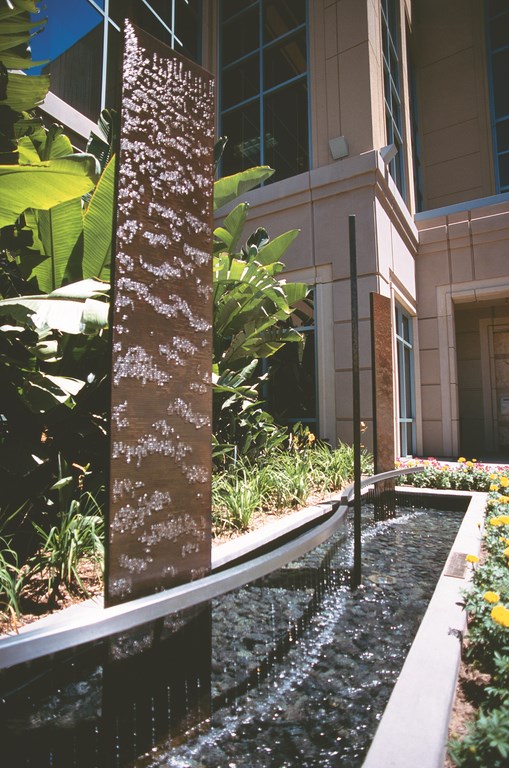 Playing with surface tension has been a hallmark of Orr Studios’ work with water flows for many years. Whether the base material is copper, granite or some other suitable material, the constantly changing impression made by small flows of water is immediately engaging. These are cases where up-lighting makes a strong visual impression after dark, drawing observers to watch the water dance across the surfaces in unpredictable, accessible and thoroughly gentle ways.

Sean So is principle designer and artist for Orr Studio in Venice, Calif. Born in Korea, he moved to the United States in 1980 and studied art and product design at California State University, Northridge. He began working with the studio’s founder, Eric Orr, while still in college, soon became Orr’s primary collaborator and protégé and has carried on his mentor’s work in creating iconic and enduring fountains and sculptures that use minimal and innovative flows of water along with dramatic media such as light, fire and fog. Orr passed away in 1998, at which time So took up the studio’s work at the request of Orr’s family.