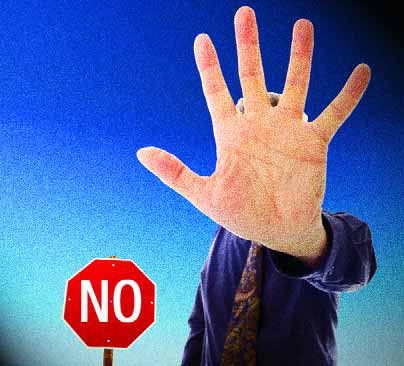 Have you ever turned down a client who really wanted to work with you and you alone?

It’s a hard thing to do, which is why most of us have found ourselves at one time or another saying “yes” despite the fact that we believe something the clients want simply cannot be done or, more important, that we’ve developed serious doubts about them. Just at that point where we really need to sit them down and tell them to go away, many times we’ll freeze – and here’s the usual reason why: “If I tell them ‘no,’ then they’ll just get someone else to do it and I’ll lose the job!”

just asking for trouble – but too often we go ahead anyway, things don’t work out and we’re left holding the proverbial bag. We knew there wasn’t any hope, but we forged ahead anyway for the sake of keeping a job.

I don’t know if you’ll admit that this has happened to you, but I’m willing to go on record saying it’s happened to me more times than I’d care to count. But that’s no longer the case: It took some doing, but I’ve learned to say “no.”

In my first WaterShapes column, which appeared just last month, I argued for finding ways to inject quality into every step of the design/construction process, no matter the size or scope of the work. Experience has taught me that a huge part of making the grade has to do with working effectively with clients.

When you’ve reach a point where a healthy rapport is impossible, you’re only undercutting your best intentions and will likely be stuck with a client who will dog your efforts every step of the way. In that light, being able to say “no” may be just as critical to maintaining high standards as having the skills you need to get the job done!

For all my glib resolve, however, I concede that saying “no” is one of the toughest things I do. Yes, I’m in business to complete jobs and pay the bills, but I’ve always known that the real reason I’m in the watershaping and landscape business is because I love what I do: Ultimately, it’s more about art and far less about money.

Nonetheless, we have suppliers, employees and insurance agencies to pay: It’s this need to do enough work to sustain operations that gets us into trouble and inclines us to stay in situations our instincts tell us to abandon.

Say a potential client calls, and even though I’ve heard through the grapevine that he hasn’t paid two other companies in the area, I still go after the job because it’s a big one that might generate recognition and referrals – and then I get stiffed and still have bills to pay. It’s a classic case in which both artistic and pragmatic aspirations are drowned by a nasty outcome, and it doesn’t take too many experiences like that one to teach you how to say “no.”

At my company, we’ve turned away lots of undesirable clients through the years. Our main tool is a carefully worded “go away” letter in which we tell clients in brief but certain terms that we are unable to work with them on their project at this time. (See the sidebar at right for a pair of model letters.) Reasons for our decision are rarely given: We won’t bring up the fact that they seem incapable of paying their bills, nor do we share the fact we’ve heard they’re awful to work with. We simply say, “no, thank you.”

If they are truly the bad apples reports make them out to be, they usually just move on to the next company and forget all about us.

Recently, for example, a prospect called us to discuss a large project. I’d heard she was a handful and had already had another company remove an entire paved driveway because it wasn’t exactly what she expected. She took “full responsibility” for the situation and had that company complete close to $500,000 in work, then had her husband try to negotiate the price down.

I heard all the details when I called a friend and colleague at that company to gain some first-hand insight. The result: I sent the clients a letter informing them that I could not help them at this time. It was short and sweet, I never heard from them again – and we did not starve from the lack of work.

Another case in point: We were called in about repairing a natural pond and spillway on the site of a very old, urban condominium complex. I was excited at the invitation and had a great meeting with a representative for the complex who also happened to be the head of the homeowners’ association. He liked my ideas and gave me a verbal commitment.

A while later, I stopped by the site to gather a bit more information and fine tune my proposal. While I was there, two other residents of the complex approached me and asked me why I was suggesting doing things “this way” and wondering in strong terms why I wasn’t thinking of doing it “that way.”

Clearly, they were not happy with what had been proposed and let me know that they, too, sat on the association board. My sense is that they felt they had some degree of control over the money end of the project and thought that my price (which was just about double that of another proposal from a contractor who had no experience with this type of project) was just too high.

I explained myself, left the site and, soon thereafter, called my initial contact to tell him I was no longer interested in the project and wouldn’t reconsider without the full and unanimous support of all members of the board. He promised me that there would be no problem with the other homeowners or with getting paid, so I agreed to another on-site meeting.

We all met and my comfort level did not change, so I backed out. It took numerous e-mails back and forth for him to accept the idea that my “no” was final. In fact, he contacted me so many times that I was beginning to feel as though I were being stalked – an experience that confirmed my suspicions that I would be better off not taking on a job with this particular set of clients.

A few years ago, another situation occurred in which my partner, Sharon Coates, became extremely uncomfortable with the way a client was dealing with her. He spoke in a condescending manner and basically treated her like a second-class citizen, and Sharon couldn’t help noticing during our discussions that he dismissed his wife in much the same manner.

Sharon sent them a “go away” letter and returned the deposit. The husband called, apologized profusely and begged Sharon to resume her work. She reluctantly agreed, met with them again and revised the proposal at his request. He then canceled the job, wasting more of our valuable time and confirming our feelings about working on the project.

Despite experiences of this sort, most of us feel the pressure to say “yes” as a matter of operational practicality, but the simple fact is that saying “no” will not cause your business to plunge toward bankruptcy: In fact, saying “yes” to the wrong client in the wrong circumstances will push you in the direction faster and more surely than saying “no” ever could.

This is why I put so much credit in my instincts – and why I spend a good bit of time communicating with colleagues and vendors in my market area about what’s going on locally. I’ve never seen other firms in my area as my enemies; in fact, I count many of them among my friends and best business allies and much prefer seeing them as colleagues rather than as competitors.

On the all-important client front, however, it’s all about comfort level and reaching a stage where you simply refuse projects that aren’t a reasonable fit. In that respect, it’s something that comes with the territory for business owners: If you manage to keep your emotions from taking control, learning to say “no” will actually keep you going!

Bruce Zaretsky is president of Zaretsky & Associates, Inc. a landscape design/construction/consultation company in Rochester, N.Y. Nationally recognized for creative and inspiring residential landscapes, Bruce also works with healthcare facilities, nursing homes, hospitals and local municipalities in conceiving and installing healing and meditation gardens – and labyrinths, too. You can reach him at [email protected]