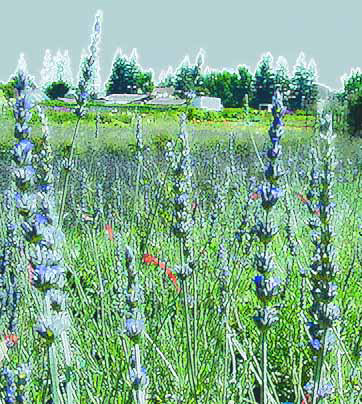 Few plants have been written about, lingered over and so passionately associated with fragrance, healing and serenity as lavender. Beyond stunning beauty of the sort seen in the vast purple fields of Provence, lavender has spread worldwide, leaving a trail of exquisite aroma and touching everything from our imaginations to our health.

Some say lavender has pain-killing, antiseptic and skin-rejuvenating properties and that it’s great for toning skin, fighting acne and soothing burns and cuts. This versatile plant is used as well to infuse perfumes, oils and soaps, and I know from my own experience that it makes a great marinade for lamb and adds a wonderful accent to ice cream. It’s also considered to be one of the most calming of the essential oils and is used particularly in treating insomnia and anxiety.

Though I personally cannot vouch for these interesting qualities (beyond the culinary ones), I do know that lavender is among the most useful of all botanical entities we have at our disposal. There are so many different varieties that you can almost always find one that will fit into a landscape design.

The great thing about lavender and watershapes is the fact that these plants typically have neat, clean growth habits that make most of the varieties an easy choice for planting near water.

The flowers mostly stay attached to the plant at the end of their long, slender stalks, then dry on the plant – so there’s no debris to fall into the water. But an attentive homeowner won’t let things get quite so far and will definitely harvest those flowers: This is the part of the plant that carries most of the fragrance, and cut stalks will hold their aroma for years. I have some, for instance, that I cut seven years ago, and there’s still a distinctive fragrance when I crush the flowers between my fingers.

But urge your clients to pay attention to the rest of the plant, because I’ve found that most lavenders have fragrant leaves as well. Check it out for yourself: When searching through the nursery, you’ll get an aromatic surprise when you rub lavender leaves and flowers between your fingers.

With their light grey-green to completely grey foliage, lavender plants are as good in the garden as they are in the medicine chest or kitchen. The varieties with which I have the most experience range from one-foot-diameter mounds (among dwarf selections) up to about four feet in diameter. They range in form from neat, compact, rounded mounds to soft, more free-form, irregular shapes. Some have a feathery appearance, while others are more upright. Most prefer full sun and moderate watering, but I’ve also had some success when planting them in partial shade.

All that variety means you can just about always find one that’s right for most landscape styles. For example, I like to use French lavender (lavandula dentata) in natural designs, while English lavender (lavandula angustifolia) works better for me in contemporary or more formal planting palettes.

A word of caution when it comes to terminology: I was in Provence a few years ago and innocently referred to the plants I saw in the fields as “English” lavender, because that is what we call it in the United States. The French, of course, call it “French” lavender and chastised me for being so misguided. Ever since, I’ve done my diplomatic best to refer to either variety using only botanical names!

Sunset Western Garden Book lists about a dozen different species of lavender. Of those, I typically choose among four and see a fifth variety used extensively in southern California gardens that I refuse to select (more on that below). These are: 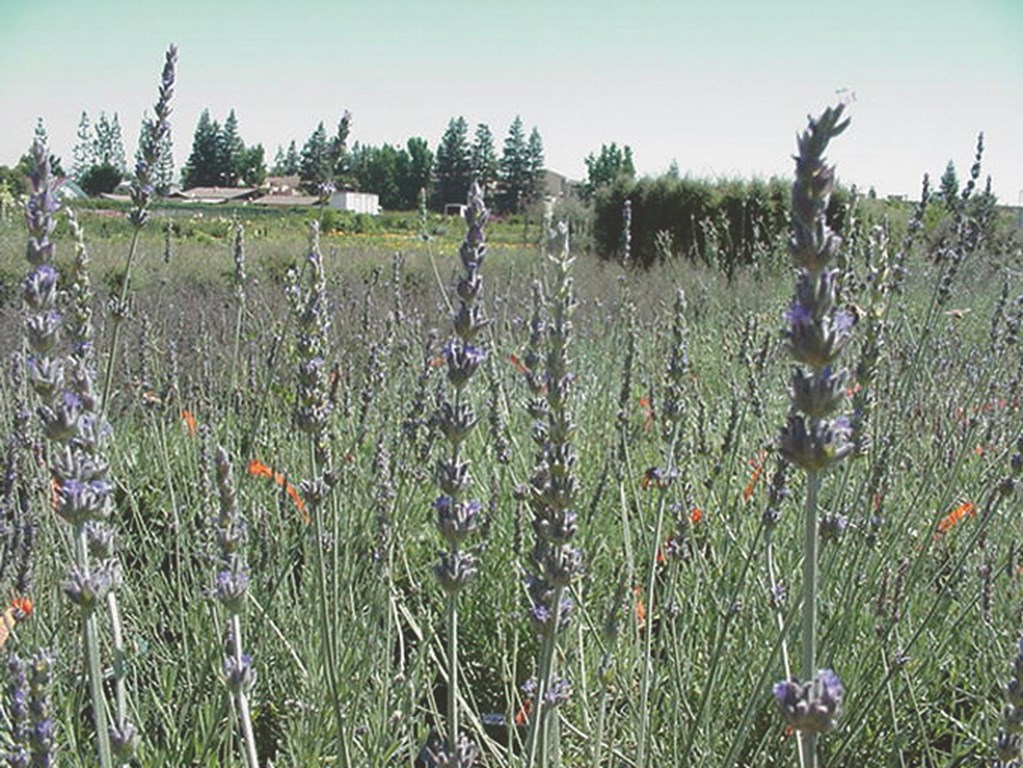 [ ] Lavandula angustifolia (English lavender). Many varieties are covered by this name, each with a different size, a slightly different fragrance (obvious only to the trained nose) and slightly different growth habits. Typically, they all have fragrant leaves and upright growth habits, with flowers borne on longer stalks than is the case for other lavenders. My particular favorites: ‘Hidcote’ (Dwarf English Lavender) and the ‘Munstead’ varieties. 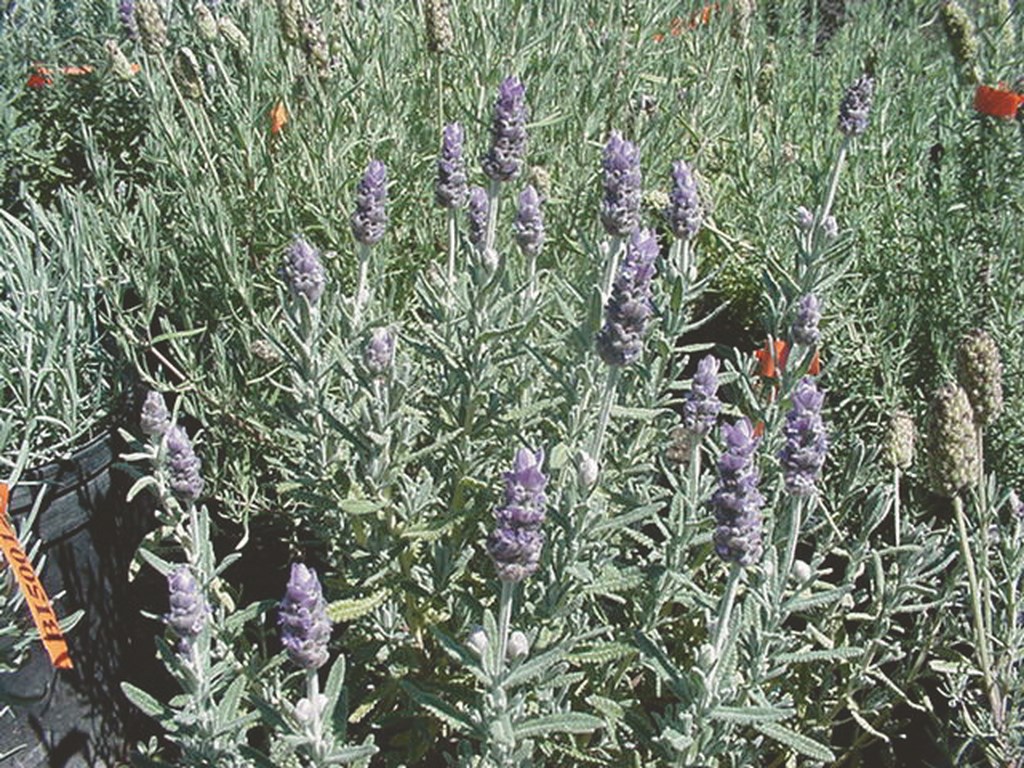 [ ] Lavandula dentata (French lavender). This plant is named “dentata” because of the tooth-edged shape of its fragrant leaves. It tends to be an irregular plant, and I’ve used it more than most other lavenders through the years because it makes a great filler in the middle of a border in addition to providing nice color contrasts against green foliage with its greyer tones. Maintenance can be an issue, because these plants require annual shaping and removal of dead wood to ensure long-term attractiveness.

[ ] Lavandula x intermedia. These plants are hybrids of the angustfolias and latifolias and are most similar in appearance to the angustfolias, but they tend to be more fragrant and larger than the true angustifolias. I particularly like the “Grosso” variety. 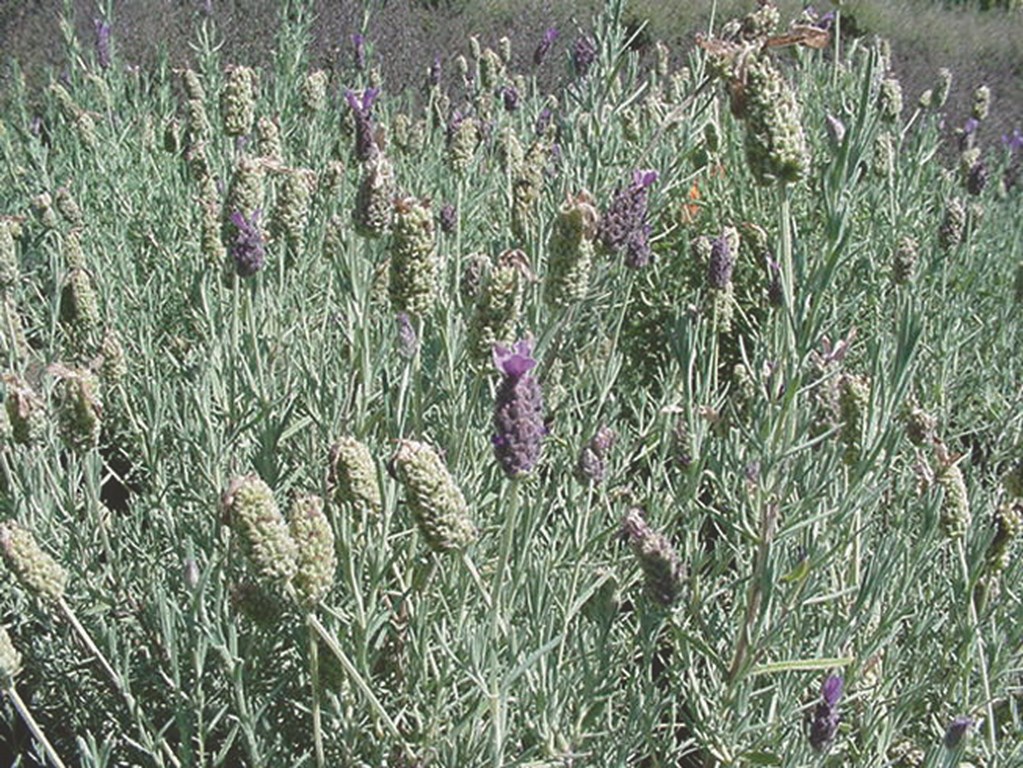 [ ] Lavandula stoechas (Spanish lavender). I use these plants, but I must confess to having limited success with them For reasons I can’t pinpoint, many of the plants I’ve used have tended to stop flowering – and it’s the unusual flowers that make them a client favorite. The plant itself falls somewhere between the feathery look of dentata and the upright appearance of angustifolia, and the flowers are indeed beautiful, with a deep-purple color and a capsule-like shape topped with tiny flower petals that look almost like wings – or like a purple bee on top of the stalk. Give it a try, but don’t overbuy!

[ ] Lavandula multifida. I may come across as a plant snob, but I refuse to plant this variety, which does well in my area and is a staple at most nurseries. Personally, I think this variety gives lavender a bad name. Yes, it has beautiful, feathery leaves topped by vibrant, deep-purple flower stalks, but, in a word, it stinks.

My Sunset guide says it has a “strong, earthy, medicinal scent,” but I beg to differ – and I simply don’t believe in giving people lavender that doesn’t smell sensational. I’ve also found that this variety is generally short-lived and gets quite woody underneath. Frankly, I prefer other species, but I urge you to take the smell test – and to let me know if you don’t agree!

BACK TO THE KITCHEN

When I talk to my clients about lavender, I usually mention the fact that they can find lavender soaps, perfumes, essential oils and the like at most beauty-supply shops and places where essential oils are sold. I also mention that it’s the key flavoring agent in wonderful honey from France – difficult to find here but much prized in my kitchen.

Then there’s the fact that lavender can be used to make a most wonderful marinade for lamb. Just take a large Ziploc bag, add olive oil, as many lavender stalks as you want, salt, pepper, garlic, cayenne pepper and a little Dijon mustard, mixing well. Apply the marinade to a butterflied leg of lamb for at least one hour (or, better still, overnight). The result is a flavor like none you’ve ever tasted.

I find myself using this “informative” approach more and more often in discussing these plants with my clients, especially when I know they’re into cooking or when a backyard watershaping project will be including a new outdoor kitchen. Sometimes these fun and interesting possibilities can nudge them in the right direction.

And don’t let them forget that lavender can be added to a warm vanilla ice cream mixture before it’s placed in an ice cream freezer. It adds a unique flavor that guests will be hard pressed to identify, but one that will surprise them pleasantly once the secret ingredient is divulged!