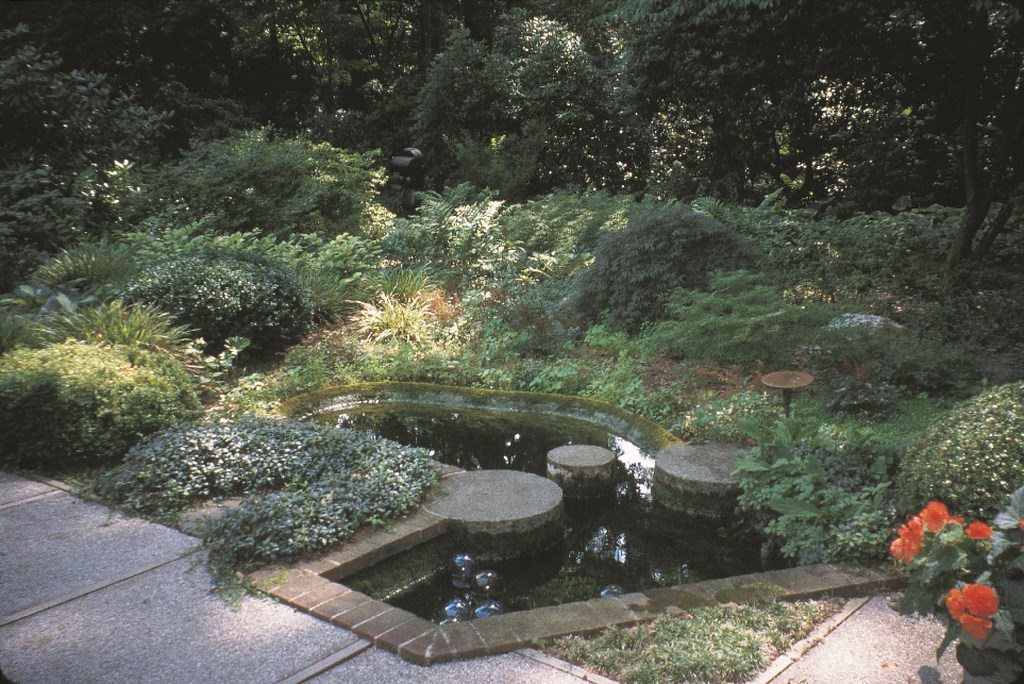 Whether you choose to replicate old stone structures or borrow ideas and transplant them into contemporary designs, there is certainly a treasure trove of design concepts to be found in the masterworks of those who’ve gone before us. Indeed, stone has been the raw material of choice for many of the world’s greatest architects, landscapers and watershapers, each of whom has relied on stone and its timelessness in fashioning works of beauty.

In the first two articles in this series, we toured gardens across Europe and North America and paused to examine walls, footpaths, stairways, stone structures and more – our objective being to develop an appreciation for common materials used in very special ways to add distinction and a meditative sense of antiquity to garden spaces.

This time, we’ll continue our travels, stopping by spaces both famous and not so well known to look at their rock gardens, bridges and, finally, stone cascades before wrapping things up. These fresh examples will round out the set of details that can be added to any watershaper’s design work – touches that will leave lasting impressions in the minds of those who venture into the spaces you create in the here and now.

I’ve always found it surprising that designers, particularly those who live in areas with very little rainfall, so rarely take advantage of an opportunity to do something different and unexpected by creating rock gardens or xeriscapes near their swimming pools or other watershapes.

Much more so than a green garden, these areas become extensions of indoor space – “outdoor rooms” in a truer-than-usual sense of the term. Just as interior spaces are decorated, we need to consider ways to decorate these outdoor spaces. And stone lends itself beautifully to this inventive process.

To be sure, rock gardens are a popular option in new gardens, but as I’ve repeated several times in these articles, the most appealing among them are those that look old and well established. And of course, this can only happen when the stone itself looks old.

Paul Zammit and Uli Havermann have designed a new residential garden in Toronto that takes on the mantle of age by using old rock to retain the soil and create paths and steps through the garden (Figure 1). Remarkably, their garden was only two years old at the time I visited it, and the front half was just a year old. 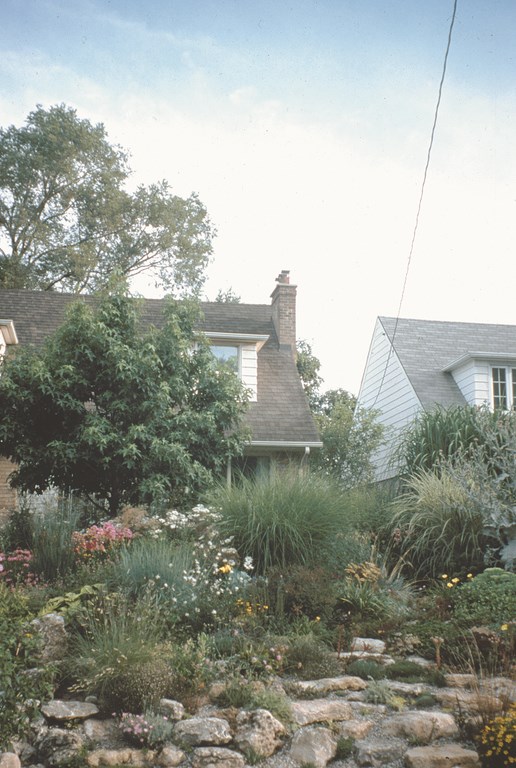 The stone, extracted from the nearby countryside, was hand-selected, piece by piece, for shape and color. Havermann specifically sought out rock that showed obvious signs of long-term exposure and those encrusted with mosses, lichens and bits of twigs, and then laid them so that they would mirror one another, always keeping the stress lines consistent.

This rock garden happens to be in the front yard of this property, but it could just as well be adjacent to a swimming pool or pond. The marvel is that it looks as though the stone had been there for eons and that someone just came along and built a house. The designers also selected plant material with care, particularly for the front half of the garden, selecting species that would survive on no more than natural rainfall.

A very different twist on a rock garden is the two-level raised bed at Upton Grey in England (Figure 2). The bed is the focal point of a space surrounded by flower beds, and the fact that the stone used here is the same as the stone used in the walls beyond is a nice unifying touch. 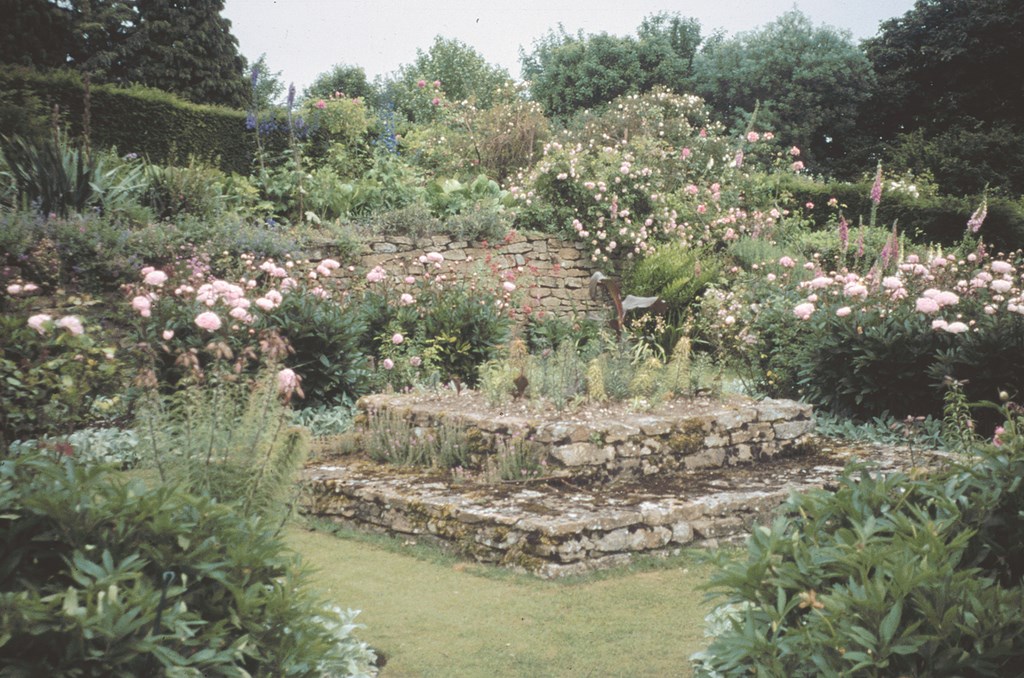 In a sense, the Upton Grey rock garden is no more than a glorified planter of the sort found in gardens all over the map. Often, structures of this kind look like the one I saw in a Boston garden, where a large piece of stone had been hollowed out to serve as a pool and fountain base (Figure 3). 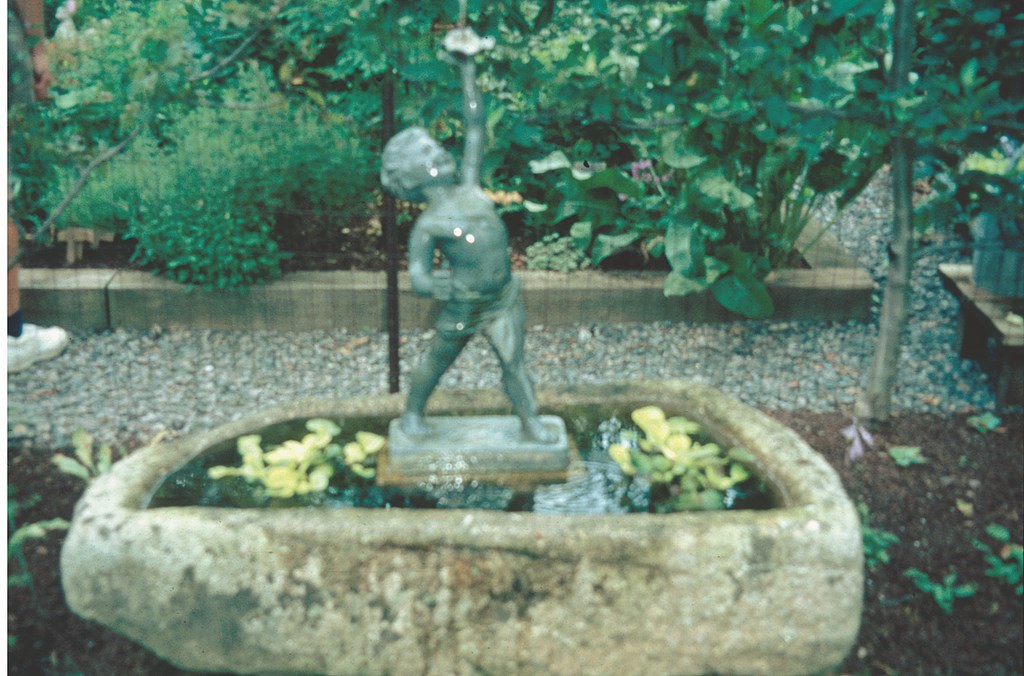 The selection of a classically themed fountain statue completes the impression of age conveyed by the stonework.

By no means does stonework have to be small scale or modest to be effective. Bridges are a case in point where grand can be wonderful – and they are indeed among the most striking of all the stone structures I’ve seen. Where rock gardens provide something of a sculptural dance, bridges slow down the impressions to a more deliberate and contemplative pace.

Even small bridges can make a huge impression, as is certainly the case with the beautiful bridges at Stourhead, a former English estate that is now a National Trust garden (Figure 4). Such bridges would be difficult to duplicate today because of the cost; just the same, they suggest ways of organizing and connecting settings in both space and time that can be applied in different ways today. 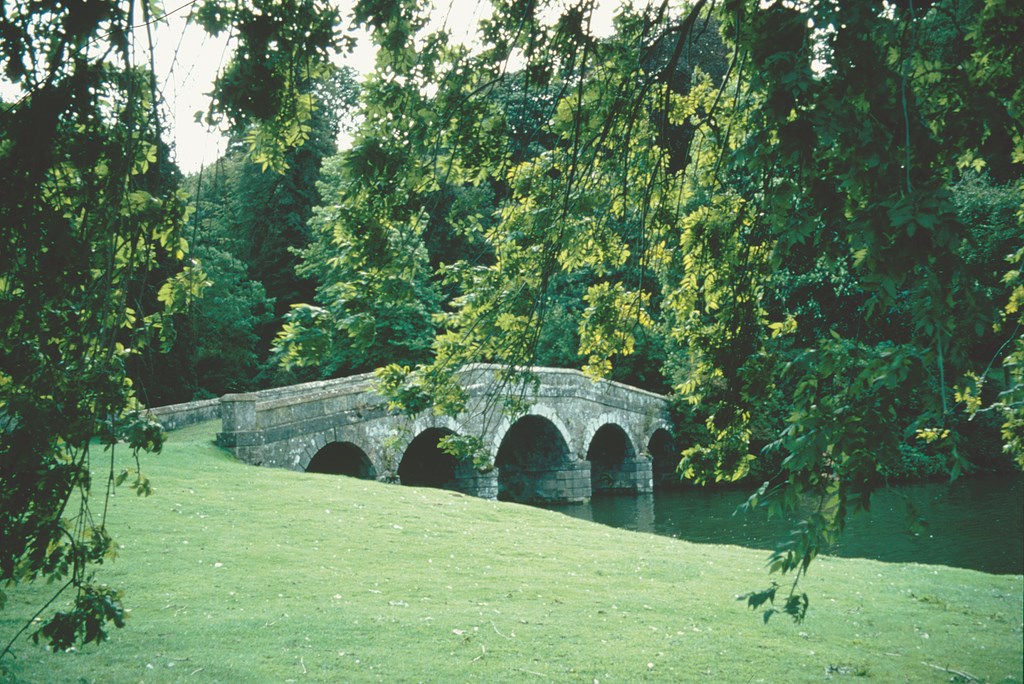 Even minimalist approaches work well in garden spaces, as can be seen in the monolithic stone bridge I crossed while following a stone path at Iford House (Figure 5). What impressed me most about this bridge treatment was its placement: Instead of being a direct extension of the path, the bridge stone was offset, forcing the walker to contemplate the scene and not just forge straight ahead. 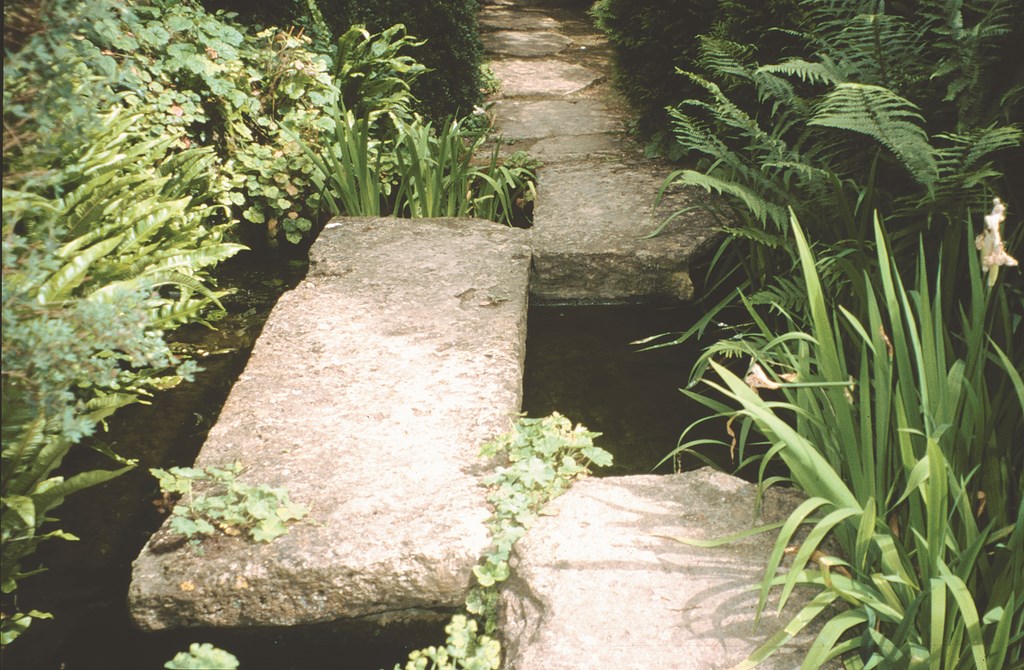 In this way, the designer at Iford House used a small and subtle bridge to create a distinctive focal point. On yet another terrace, crossing the same body of water was a different experience: Here, the stone path was more direct, but the walker still had to slow down because this time the stones across the water were uneven.

A contemporary version of this type of bridge is seen in the cantilevered stone slabs set over a koi pond (Figure 6). This has the effect of virtually immersing the adventurer within an aqueous environment. (Although the garden is relatively new and the stone shows little evidence of antiquity, the combination of shade and moisture should quickly help it show some age.) Even simpler in concept are a pair of projects designed by Oehme/van Sweden in the Baltimore area: One uses a polished stone slab to traverse a sculpted corner of a watergarden (Figure 7), while another features round platforms that offer a short cut through the watery space (Figure 8). Both of these looks are sculptural and architectural; I can see making them take on a more natural cast by using submerged rocks with flat tops as a substitute. 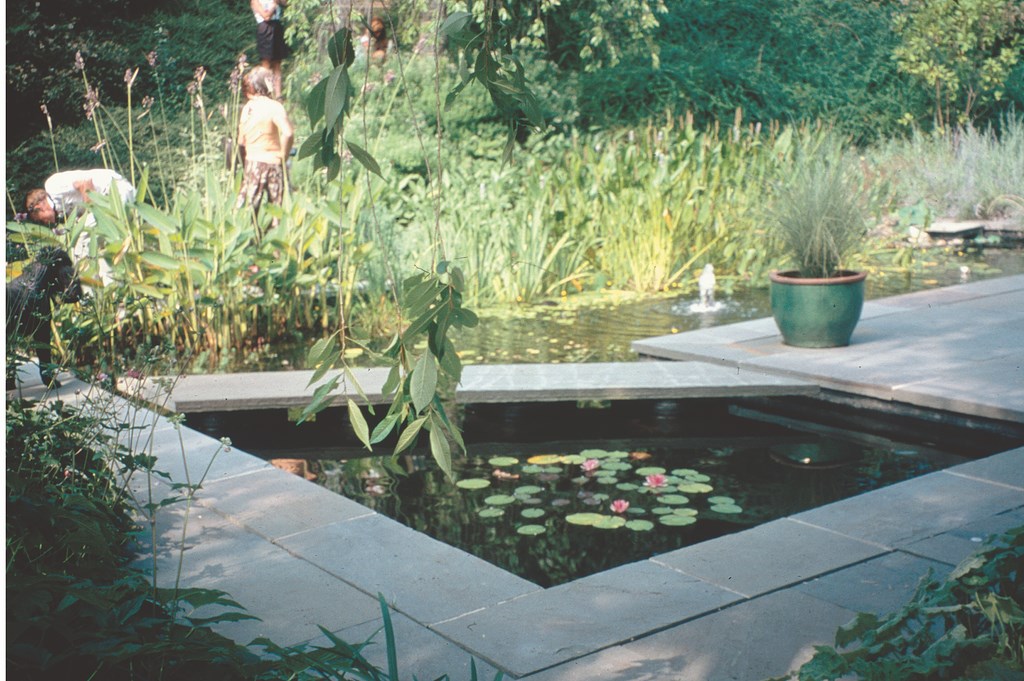 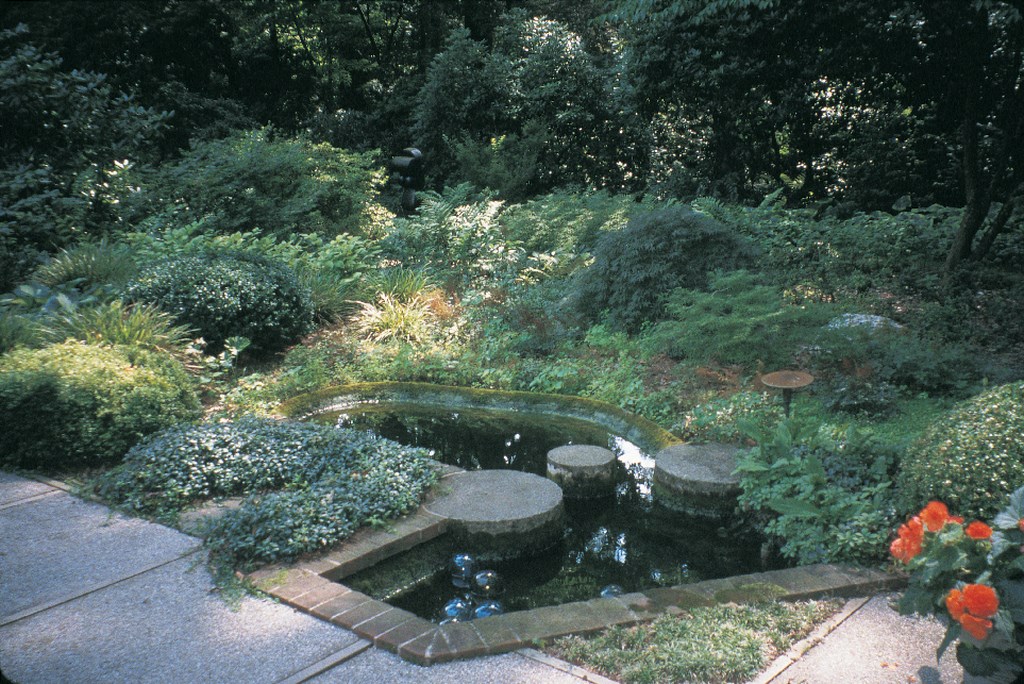 To be sure, bridges aren’t for every space, but when the opportunity presents itself, they can be wonderfully effective and intriguing.

Another effective and intriguing use of stone is in the form of cascades – something that is probably nearer and dearer to watershape designers than any of the other stonework forms we’ve encountered so far.

We’re all more or less familiar with concepts of stream-building and waterfall design and are aware of the use of stone to create naturalistic water effects both large and small. What interests me in the context of this article, however, is a different approach – more sculptural and architectural – to the use of cascading water in built spaces.

Stone cascades have been with us since antiquity, probably contemporaneous with early irrigation systems and certainly they were in wide use by the time aqueducts served as a means of water distribution. But artistic usage of moving water really hit its stride in Europe during the Italian Renaissance, when places such as the Villa d’Este took the decorative potential of water to totally new levels of grandeur and inspiration.

From that creative source have come cascades such as the curvilinear water chain installed in the children’s section of the Royal Botanical Garden in Hamilton, Ontario, Canada (Figure 9). 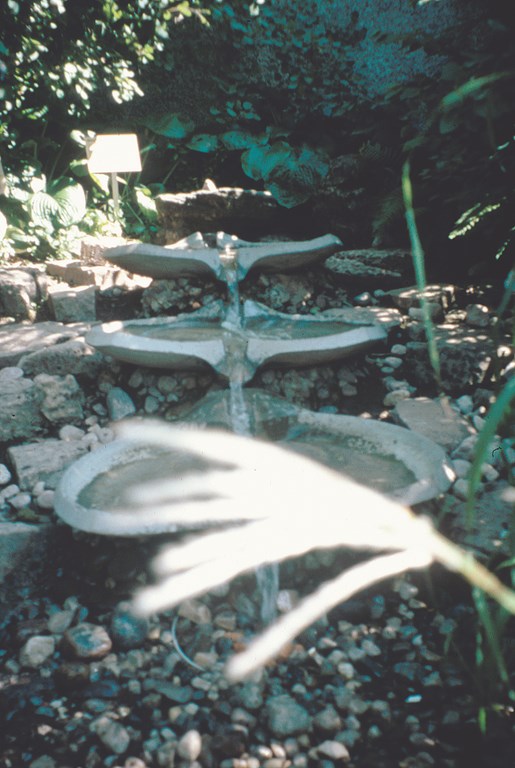 A more formal, architectural (and less evocative) impression is made at the Garden’s visitor center, where water from arching fountains falls into a pool before overflowing as two cascades into a lower pool (Figure 10). 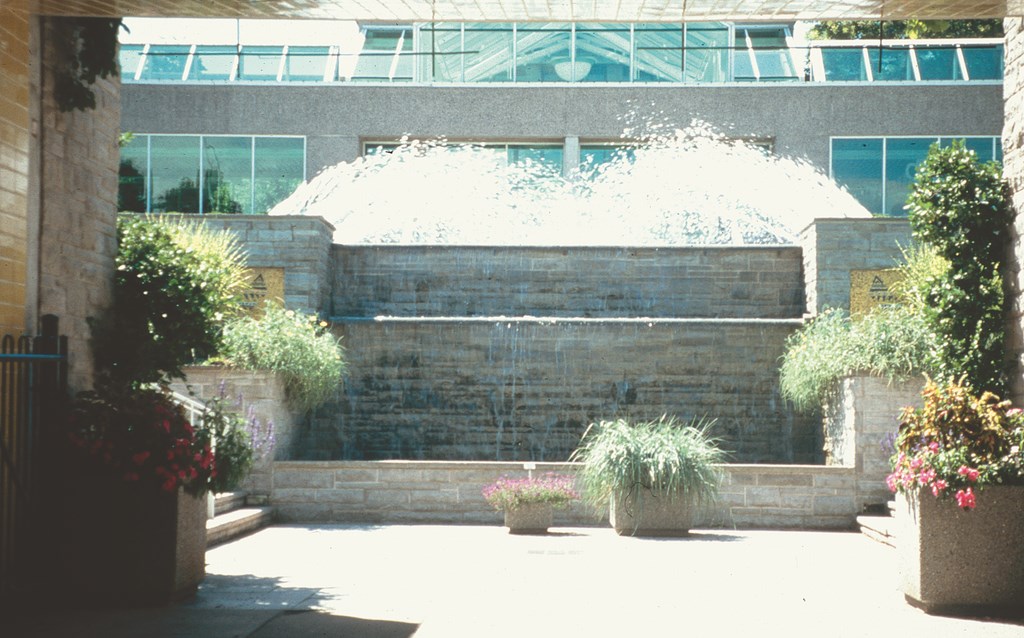 Ingenious minds, however, have created cascades with much more commanding presences – the distinctive quality that makes viewers take second and third looks. One of these is the polished stone cascades that are part of the Franklin Delano Roosevelt Memorial in Washington (Figure 11). These cascades are an integral part of the memorial, which features stone monoliths engraved with FDR’s most powerful words. Here, stone, words and water work together to evoke powerful emotions. The Parc Andre-Citroen, a public garden in Paris that opened in 1992, has a similarly distinguished and distinctive cascade (Figure 12). Tiered on a slant, it faces another cascade that is a simpler sheet of water – and both work together to invite eyes and ears to move across the enclosing berm to the bustling sights and sounds of the River Seine.

If you asked me to capsulize my thoughts on all of the stonework features we’ve seen in this series of articles, I’d have to boil everything down to two points.

First, new work in stone benefits dramatically when the designer does all he or she can to secure old-looking stones or figures out ways to “age” them. We covered this point extensively in the first part of this series and have mentioned it several times since: The advantage of using stone is that it offers you a way to make new work look as though it has been around forever and has stood the tests of time and the elements. Plants and trees and even water will come and go, but rock is eternal.

Second, stone is much more than a construction material, and we should all find artful, decorative, attention-guiding ways to use it in landscapes. Even all by itself, a well-placed rock – one with real character – can ornament and serve as a focal point (Figure 13). 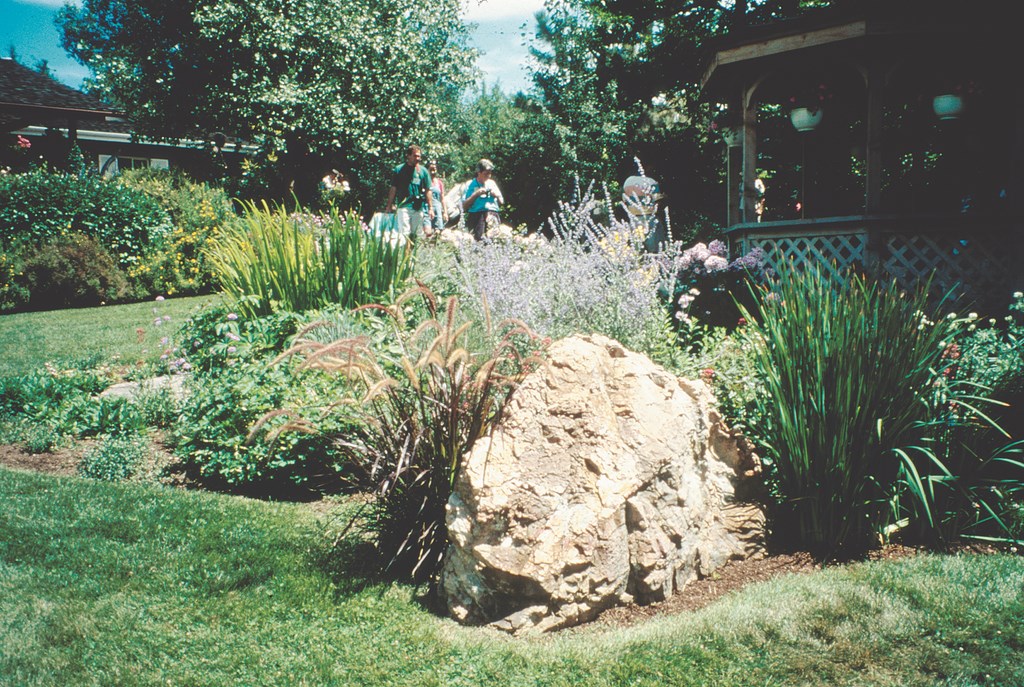 So can a beautifully carved pedestal placed upon a stone base or a single column carved in one of the classical Greek forms (Figure 14). 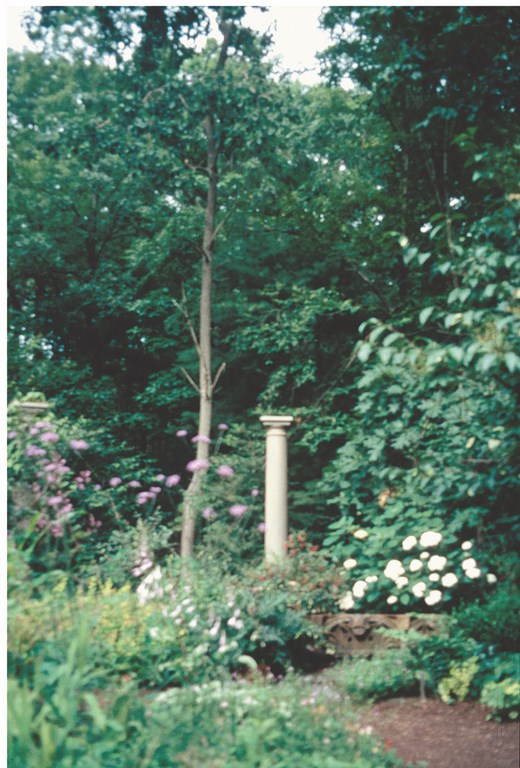 As designers of exterior spaces, we gardeners and watershapers are charged with finding creative ways to express and capture our clients’ desires. I’ve found repeatedly that studying the approaches of the masters of the craft offers a rich vein of guidance and inspiration – the keys to creativity.