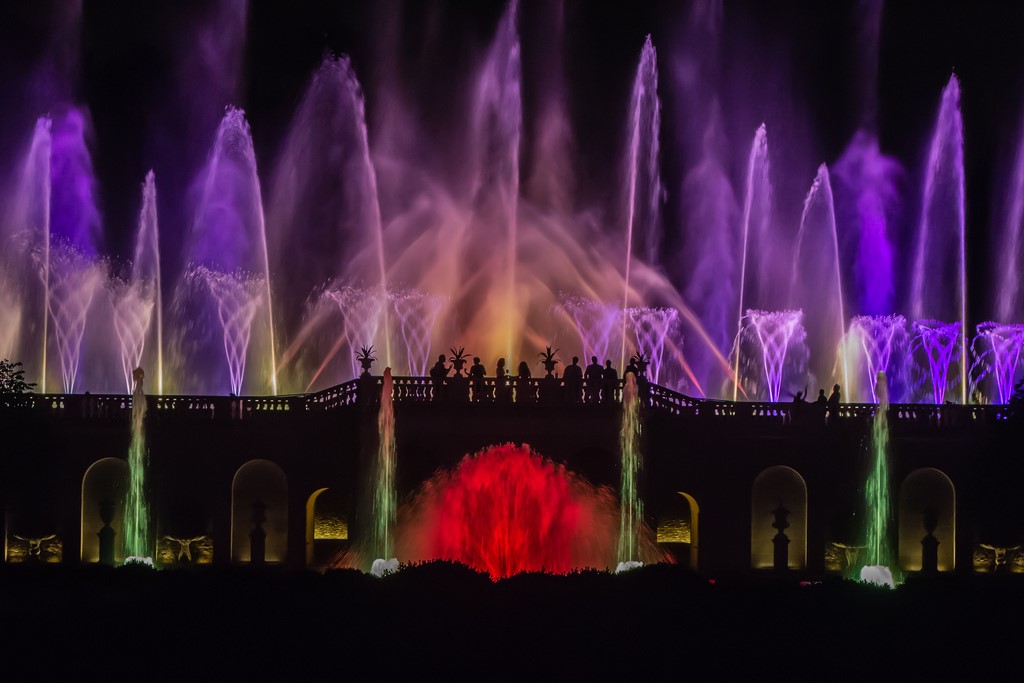 To say that I’ve avidly followed the just-completed process of restoring and renovating the Main Fountain Garden at Longwood Gardens is putting it mildly: This water display has been part of my life since I was ten years old, and I’m proud to say that it’s responsible both for my profound interest in water in motion and in some ways for my being a professional watershaper today.

So it makes sense that I was there at Longwood Gardens (Kennett Square, Pa.) on May 27, 2017, when the fountain was formally revealed to the public for the first time since it was shut down two years ago to kick off a $90 million revitalization project.

Back then, the display was not much more than a shadow of what it was when first commissioned in 1931: Several of the systems had been inoperative for many years, and I’d long had the sense that fireworks had been added to the nighttime spectacles to compensate for the fact that the fountain complex was no longer capable of pulling too much weight on its own.

But all that has changed: When the show started in total darkness at 9:15 pm on that recent Saturday night, I was utterly blown away by what I saw. It was awesome – and inspiring.

I arrived at the gardens at about 7 pm, eager to have a look around before the show to see if the restoration was as detailed and complete as had been promised. As I strolled through the fountain plaza, I kept thinking of how much it once again reminded me of the Villa d’Este in Italy – something that hadn’t occurred to me in many, many years because the long line of Italianate sconces and basin jets spanning the back wall hadn’t been fully functional in quite a while.

The intricate stonework, which had suffered much with age, sun and water exposure, has been painstakingly conserved and restored to sculpted crispness; architecture that had become stained and discolored is now clean and lustrous. And best of all, the many wall sconces and basin jets were moving water in ways I had a hard time recalling. It was all so beautiful, so fresh, so elegant.

The renewed space occupies roughly the same footprint as the original composition, but it’s clear that the design team took the time to consider every detail and decide exactly what should be left in “original” configurations and what would require a fresh approach. This sort of debate is particularly reflected in the landscaping, which literally jumped out at me as a vital participant in the setting in ways I couldn’t recall from past visits. 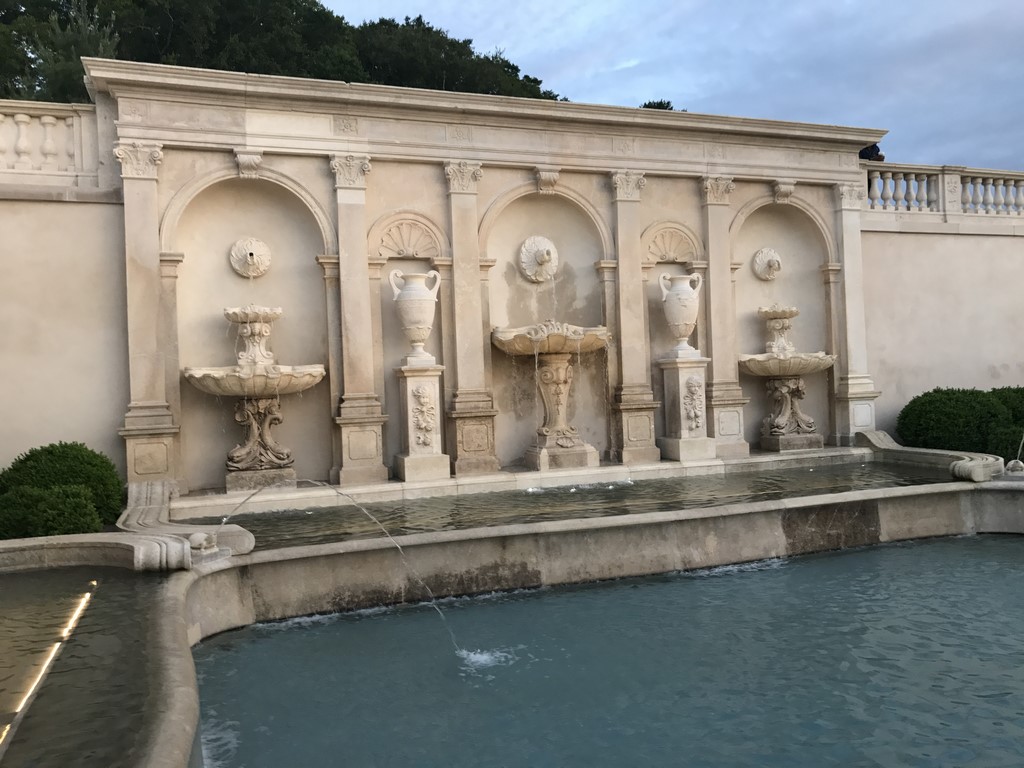 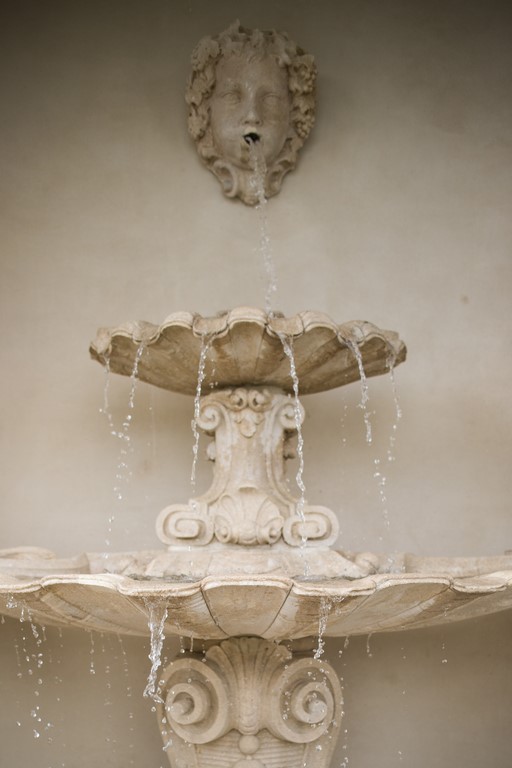 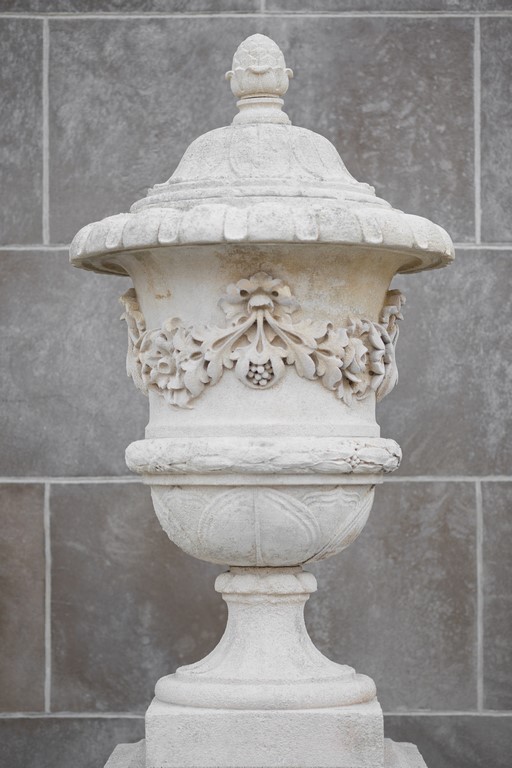 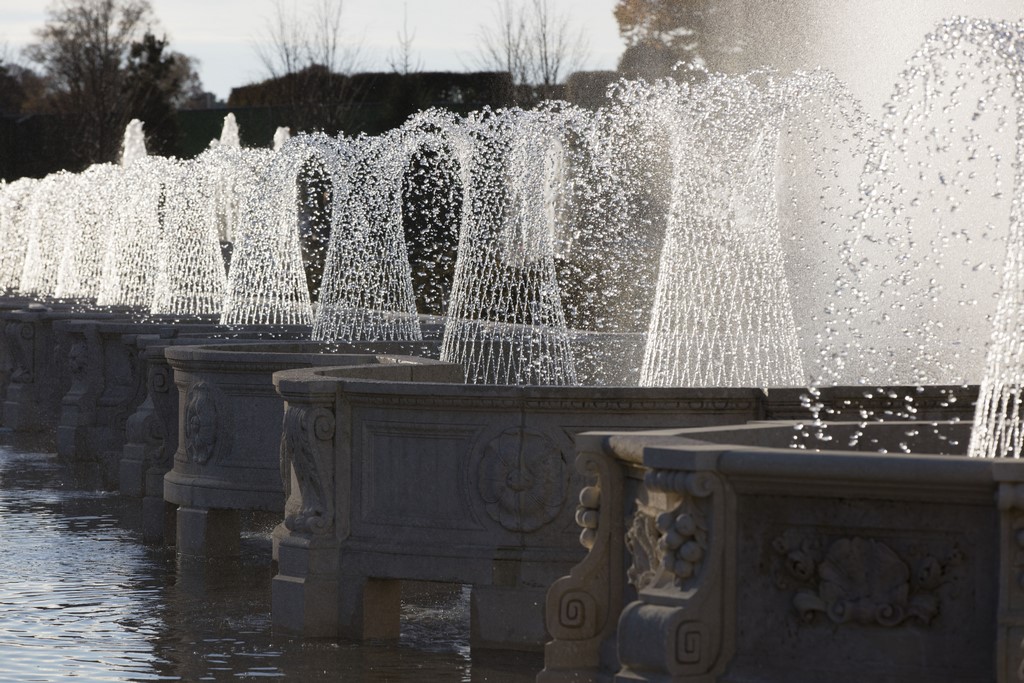 During the big water shows, the Main Fountain Garden is meant to be viewed from the large, adjacent terrace. In between those events, strolling around the fountain plaza allows you to enjoy that landscaping while studying the fountain works and developing a clear sense of scale – especially as you ascend to the upper level, where the largest fountains are housed. It’s an outsized space, and it takes a while to get the lay of the land.

The most striking of all the new details are the spinning jet arrays that turn their flows into woven lattices of water and air. There are several of them arrayed around the plaza, and every one is utterly arresting – a feast for the eyes and, for this watershaper, a particular reminder that fountain technology is changing rapidly and for the better.

The lattice effect is achieved with a spinning ring that sends slightly arcing flows up into the air, allowing the ring’s motion to wrap the droplets into conical structures that look something like delicate art-glass vases while also resembling aquatic tornados. The effects shift with the height of the flow and the speed of rotation, so even these “fixtures” are part of a constantly changing procession of water effects.

When the show finally started at 9:15 pm, the crowd was at rapt attention, scanning the fountain array to see what was happening in every quadrant. I can’t imagine anyone being disappointed, because the choreography was both magnificent and suspenseful, with new wrinkles and capabilities put on display sequentially as the show unfolded.

For this particular event, the musical backdrop was a series of Beatles’ songs. The displays were immediately exciting, and what impressed me most was the way the marvels kept building, one alongside another, as the songs moved along, with increasing tension and drama and greater use of the entirety of the fountain array marching ever onward and upward along with the energy of the familiar tunes. 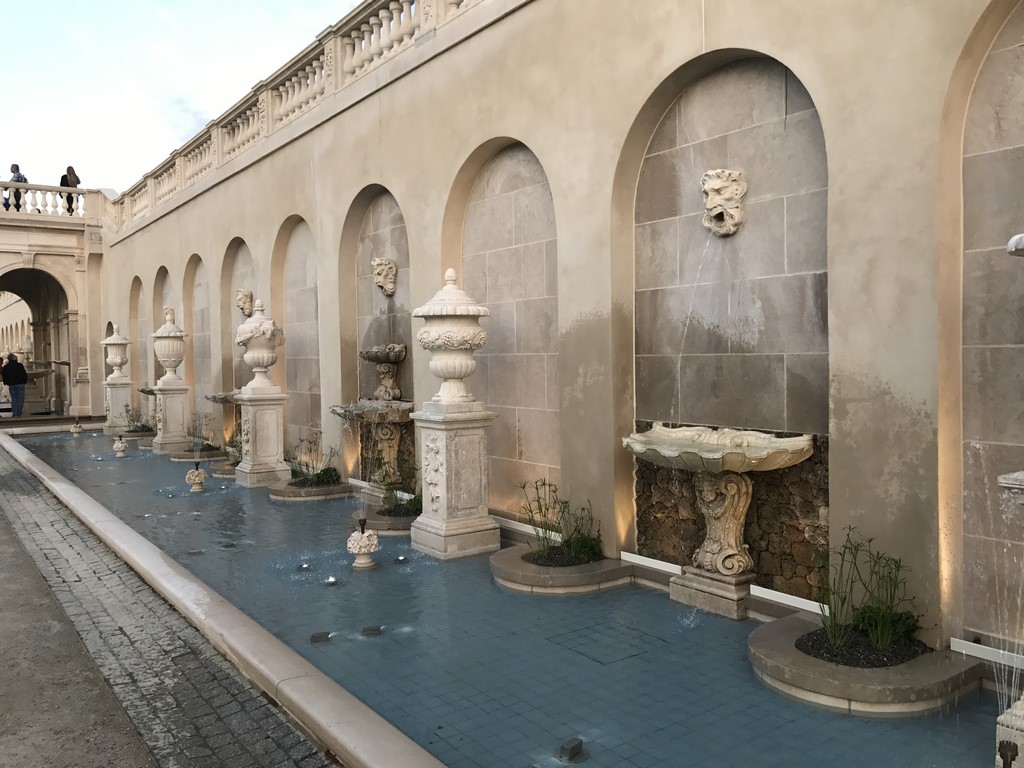 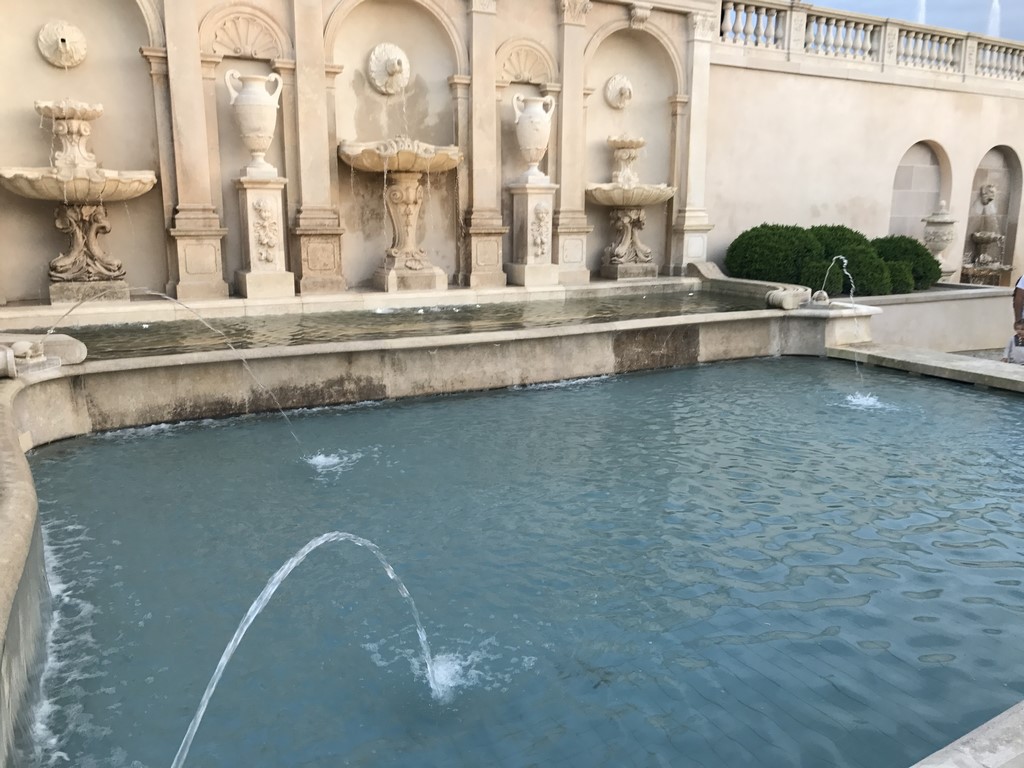 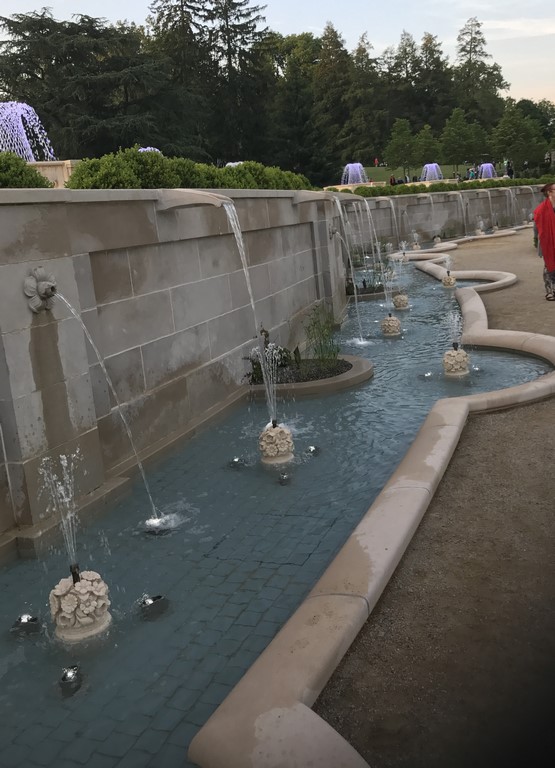 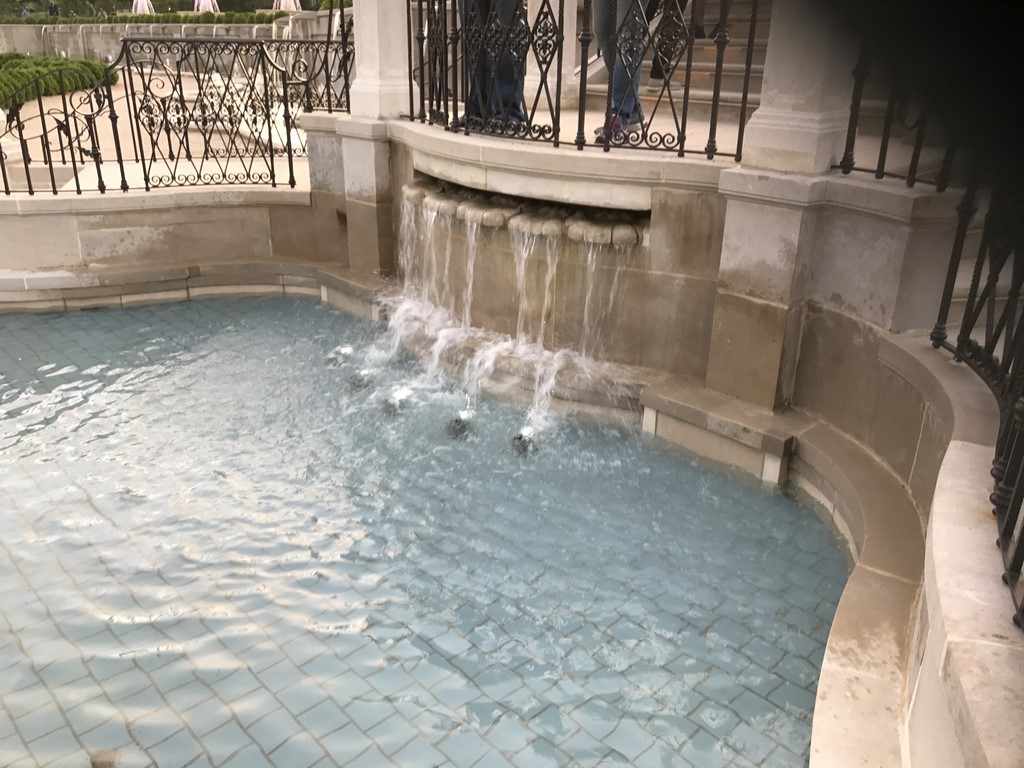 I came to the event thinking of other great water displays and how amazing they are, from the Fountains at Bellagio of the 1990s to the Dubai Fountain at Burj Khalifa more recently – and almost immediately recognized that what I was seeing at Longwood Gardens was something largely new and beyond simple comparison to anything I’d seen before, either in person or through the Internet. I was blown away, to put it simply, and found myself at a loss for words as I absorbed what I was witnessing.

True, I’m a professional watershaper. But I also found myself responding as though I was that ten-year-old kid again, seeing with fresh eyes something that had changed the way I looked at the world. Amazing. 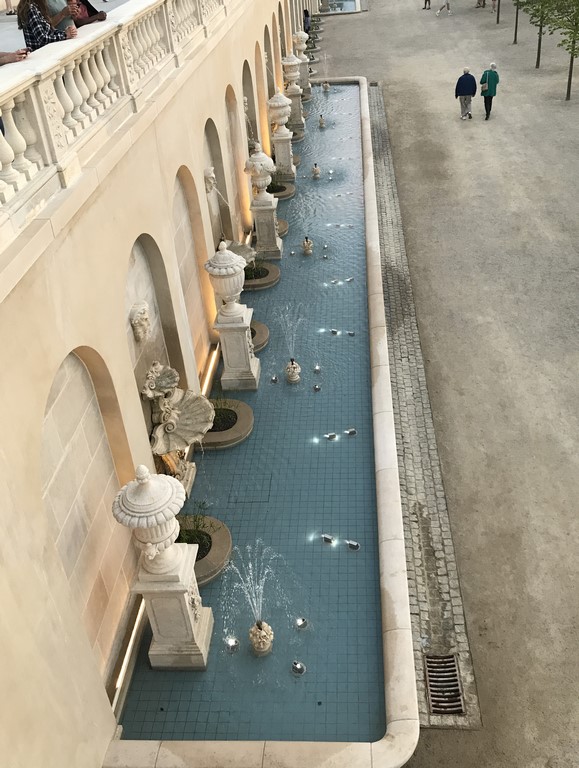 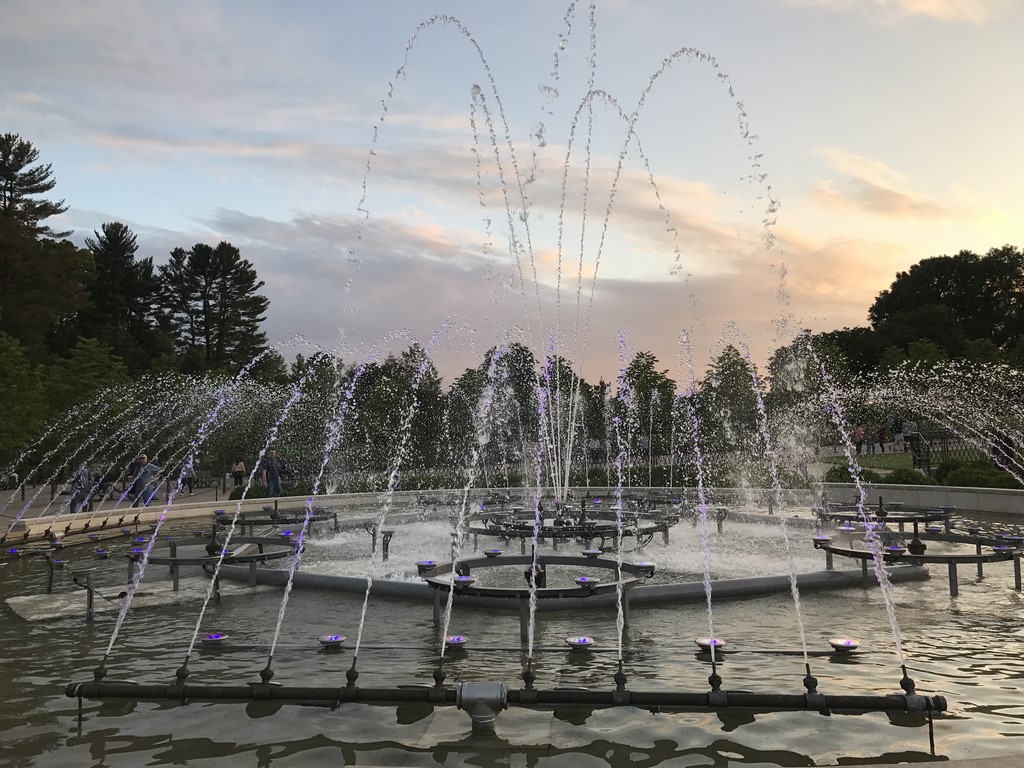 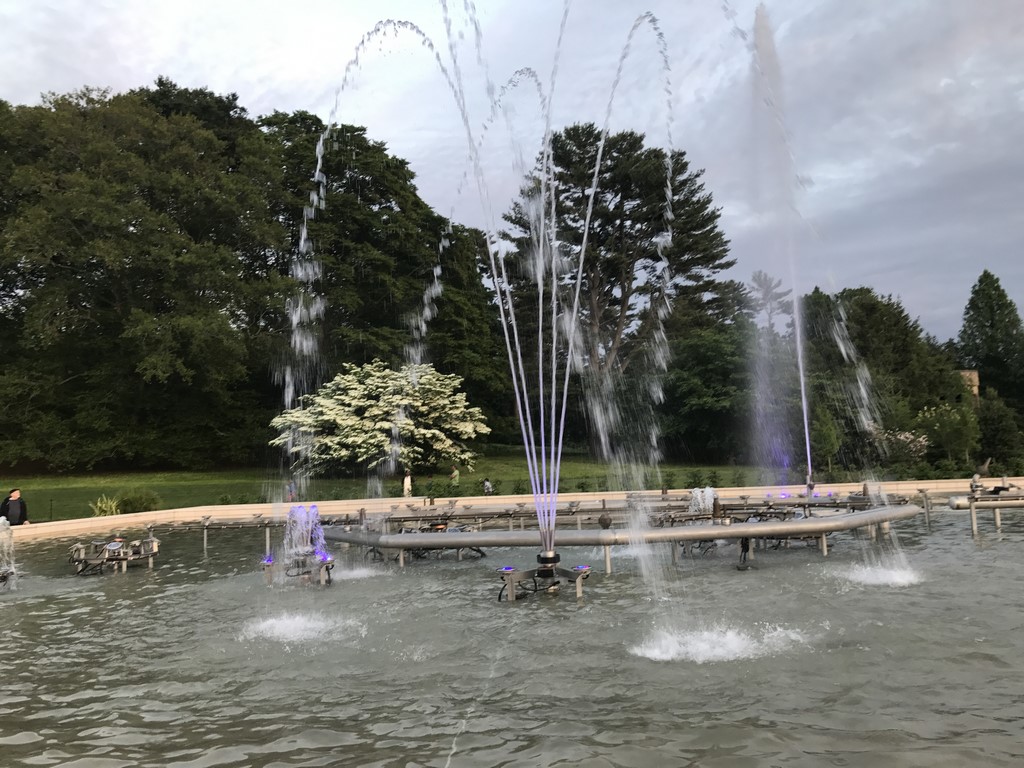 I also found myself thinking about Pierre S. du Pont and what he’d say if he were around to see the revitalized fountain. As members of the project team have made abundantly clear, they always had a sense that he was watching over their shoulders. They also operated under the assumption that, were he alive today, du Pont would have taken the same path of uncompromising updating, upgrading and planning for future enhancements.

The state of the art he had in mind nearly 100 years ago has come a long way – mostly in the recent past. I can only imagine how he’d respond to rotating fountain heads, vase-spinning fountain rings, cannon jets and the incredible control and lighting systems that have been invented since he began conceptualizing the Main Fountain Garden as part of his vast estate. Effects that almost certainly would have exceeded even his powers of imagination and visualization abound in the reborn space, and I can only picture him in the here and now with a broad, beaming smile.

There are many groups and individuals who performed at the very highest levels throughout this process, but I must make specific mention of James Garland and his team at Fluidity Design Consultants, the Los Angeles-based firm that took charge of the fountain effects and brought a comprehensive awareness of the raw potential of fountaineering to bear in making everything work together so beautifully.

Congratulations as well to Synchronorm, the Arnsburg, Germany-based company that devised the control and choreography systems for all of the Main Fountain Garden’s displays with respect both to water and lighting. The multi-axis nozzles came from Fountain People of San Marcos, Texas; Fountain Supply Co. of Santa Clarita, Calif., supplied the spinning, basket-weaving jets; and the lighting and air-driven jets came through Toronto’s Crystal Fountains. I must call special attention to the lighting, which has a subtlety far exceeding anything I’ve seen in person before. It’s clear that LEDs have come a long way in recent years with respect to color rendition, coherence and brightness, but I was stunned by the beauty and variety on display, particularly in the subtly varied blues that started appearing as dusk settled in: It made the fountain plaza about as inviting as could be. Just incredible.

Oase of Corona, Calif., played a significant role, too, by furnishing the fountain with its new fire-injected jets. The deployment here seemed modest, but there’s obvious potential in the technology that I’m certain this is an area the forward-thinking people on staff at Longwood Gardens will be following with interest for years to come. 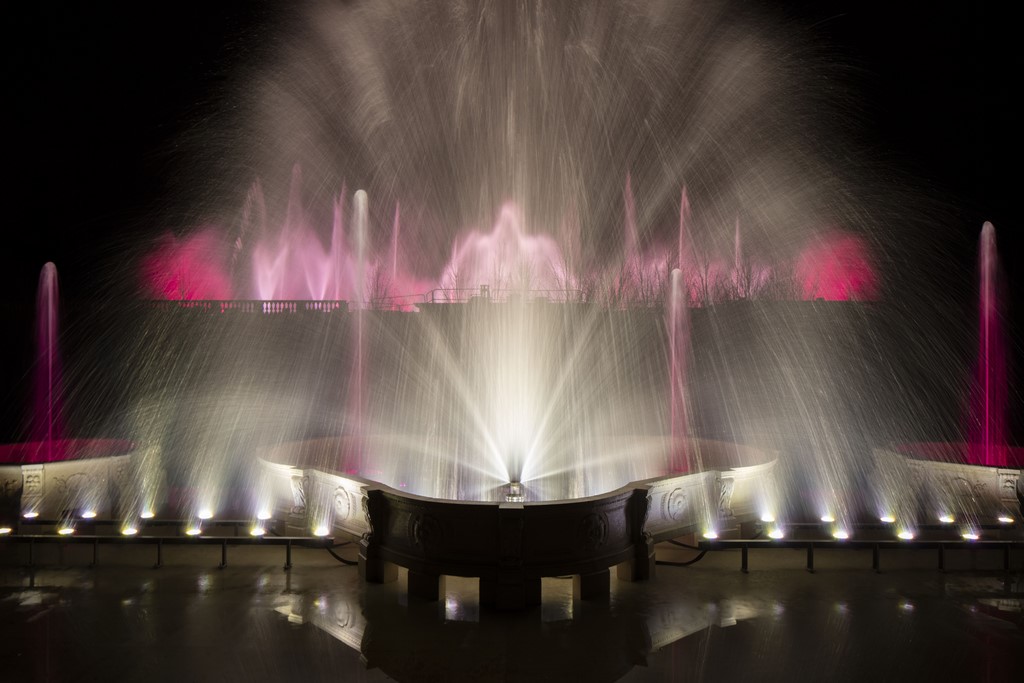 In sizing all of this up in the last few days, I’ve been struck by how much being there for the show lifted my spirits and made me feel great about being a watershaper whose focus in recent years has largely shifted to fountains. At the same time, it knocked me back a step, because I saw so clearly that I need to up my game and use the inspiration I found in the Main Fountain Garden to fuel my own creative fires.

I’ve also been thinking a lot about clients who contact me wanting a fountain for a mall or some other public space and who get sheepish about costs when it’s finally time to focus on the water effects. I know that, if I could send them all to Longwood Gardens to get a sense of where things are heading with fountain displays, things might come into sharper focus: Maybe the budgets they want to slash by 40 percent at the last minute might even increase by 40 percent once they perceive, as I have, the essential, visceral appeal of full-throttle fountain technology.

I just watched something totally new emerge, an endeavor on a level far beyond anything I’ve ever witnessed in the realm of watershaping. I can’t wait to see what comes next: Whether it’s further development at Longwood Gardens or in some other fortunate setting, it’s a whole new world!

To see a video from Longwood Gardens on fountain’s unveiling, click here.

To see amateur video of the fountain premiering in action to music of the Beatles, click here.