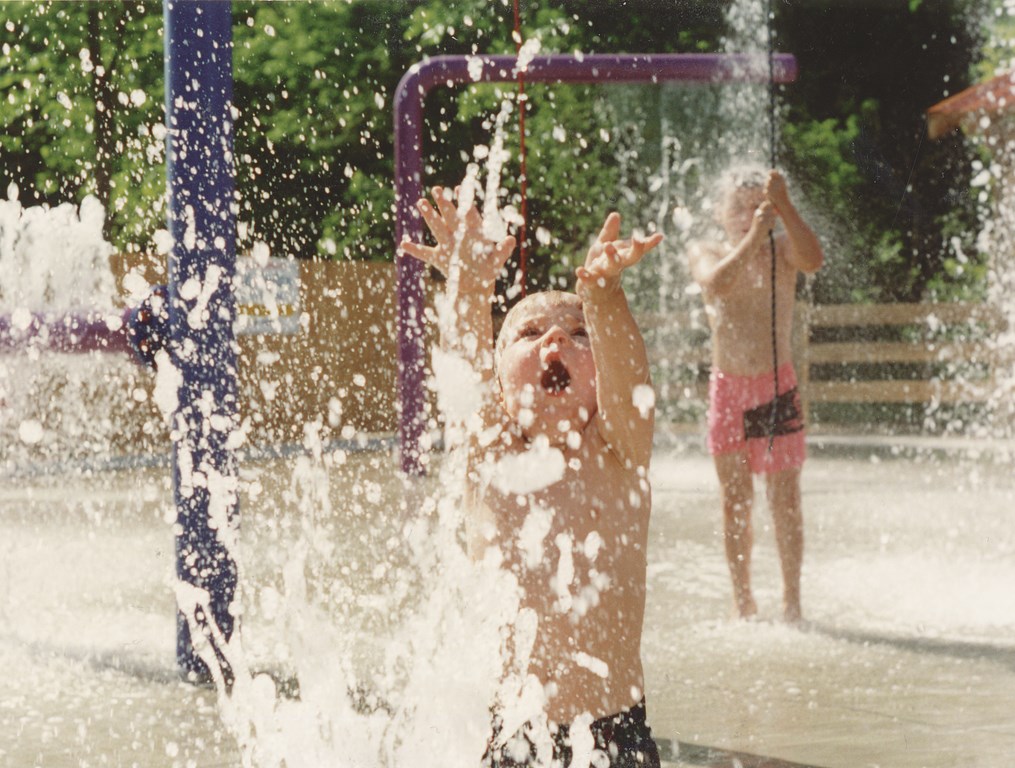 Interactive watershapes are all about invitations to play.

For designers, interactive watershapes provide invitations to use water and the control of flowing water to create unique play environments. For children, teenagers, parents and other adults, they are invitations to play with one another in a safe and exciting aquatic playground.

It’s a form of invitation that’s rapidly gaining popularity in an era when playtime for both children and adults has become excessively passive and dominated by surfing the net, playing computer games or staying glued to home-entertainment centers. As a result, many of us have essentially lost touch with how to play together.

Interactive water offers a healthy, social alternative to all that passivity. Just visit a local waterpark and you’ll see people of all ages expecting to interact with others as they play with water. And in the larger theme parks, patrons are paying big dollars to do it, enticed by the simple desire for hands-on fun with moving water, surprising causes and effects, “gotcha” games and creative teamwork.

When reduced to the scale of pools in housing developments or community pools, the invitations are compelling enough that more and more clients are clamoring for these effects as part of their projects – and watershape designers need to know how to achieve them.

At SCS Interactive, we specialize in designing and installing waterfeatures for large waterparks, but our systems are typically compilations of basic interactive water components that can be used in smaller venues.

It’s been a natural progression for us as we’ve encountered developers of planned communities who are exploring these smaller-scale waterplay areas as a way to expand activity zones for children and families and thus create a more desirable community space. Homeowners’ associations are also recognizing the need to redesign neglected common spaces and are turning to interactive water to provide central recreational magnets for their member families.

And this isn’t a local phenomenon: SCS Interactive and its competitors have watched the trend across the United States as families are beginning to search for ways to socialize and play together again, and we’ve all been deluged with requests for products scaled down to accommodate smaller construction footprints as well as smaller budgets – and have created new product lines in the process. 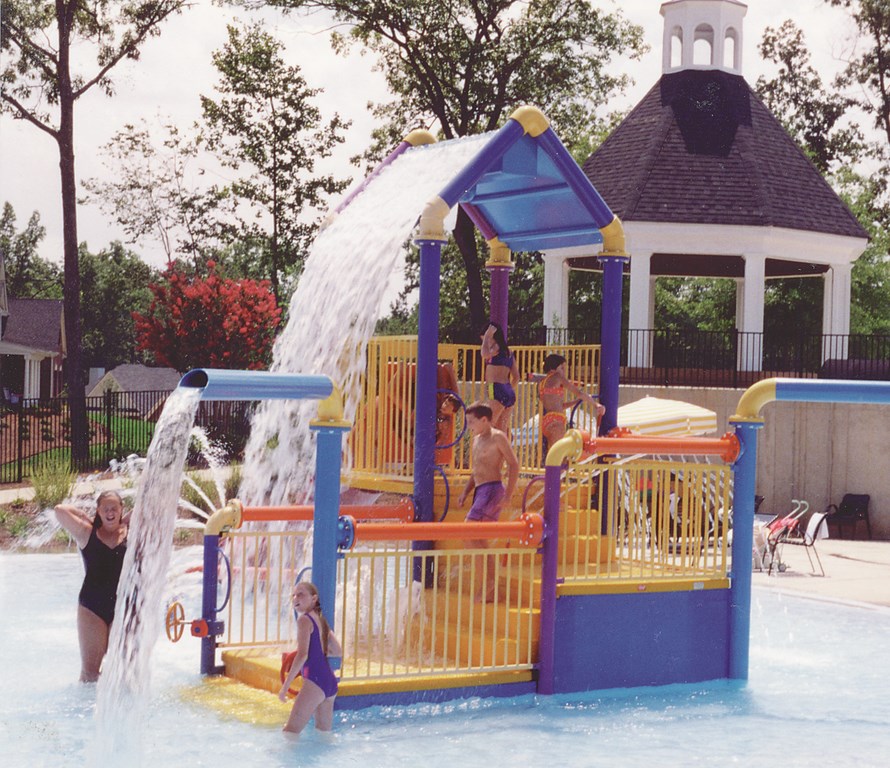 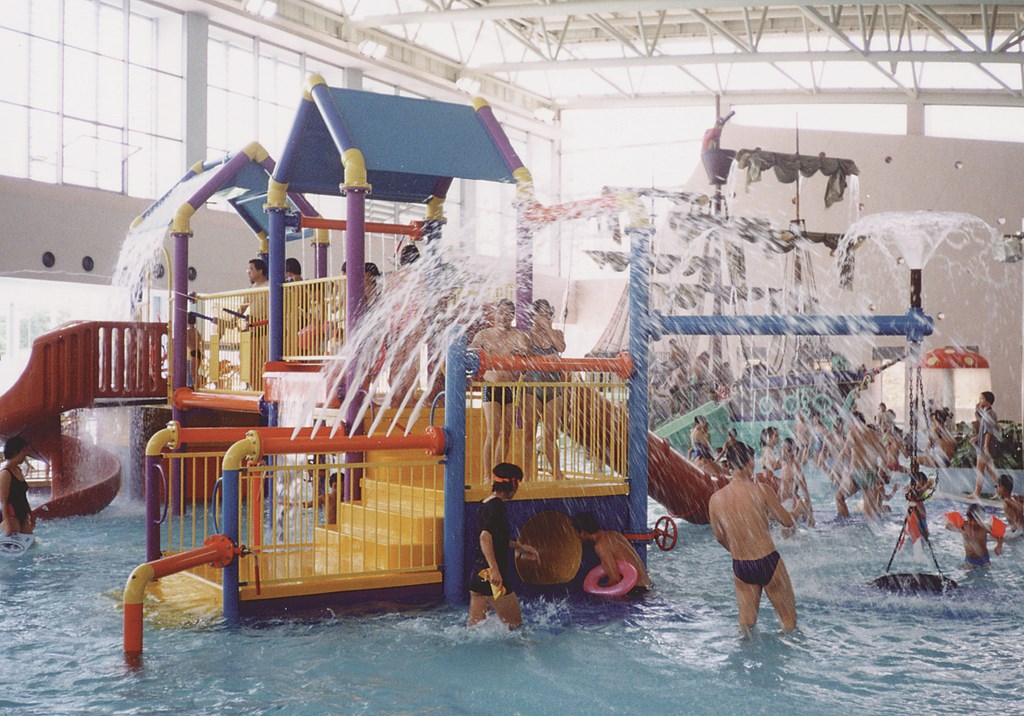 With our chief objective of offering entertainment for all ages, these new, scaled-down interactive structures all feature elements that have long been winners on a larger scale and have been thoroughly “kid tested” through the years.

This is all happening for a reason: Water is the perfect medium for cause-and-effect games and creative play. Using hand-wheels, levers and pull ropes (to name just a few of the more common interactive elements), participants modify the behavior of various jets, sprays and waterfalls, often in unpredictable ways.

This control is the key to interactive water. It empowers the user and creates a wide range of play possibilities. Consider deck-level pop-up jets, a common type of play feature that sends one-inch diameter streams of water jumping more than three feet in the air. These are fun in and of themselves, especially for small children, but when you add in the element of another person controlling those jets, a whole new dimension of play is created.

And the same principle holds for arching jets and water curtains: Just turn a valve or pull a rope and watch what happens!

THE SCIENCE OF PLAYTIME

Designing water structures for energetic play requires a knowledge of design, manufacturing, construction and operations, but it also calls for detailed understanding of “play psychology” – and for knowing how to balance all of these elements in our work. 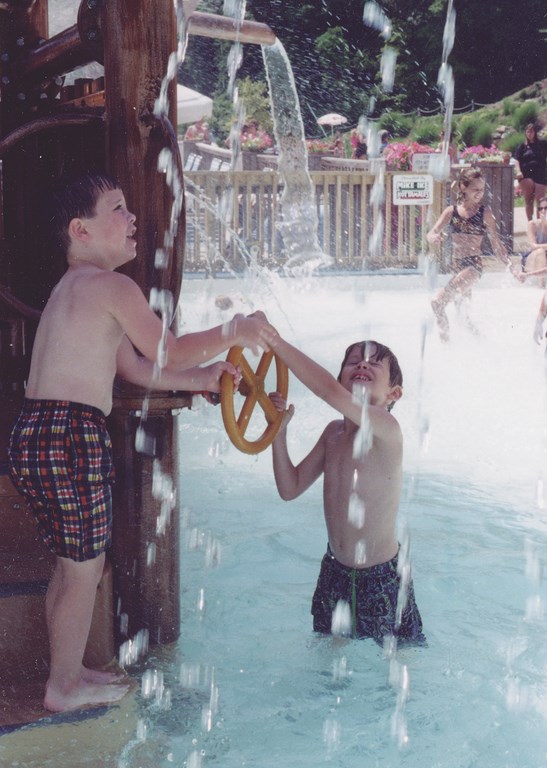 But play psychology is really the key – the essential element driving the design and manufacture of interactive waterplay systems. This isn’t a formal branch of behavioral science, but more of a principle of design that dictates the way we connect physically, emotionally and socially in a play environment.

The first and most essential element in creating a system with favorable play psychology is to create what is called “permission to play.”

It’s human nature to want to play, but in order to venture into a play environment, adults and children alike have to be able to “see” their role and visualize themselves getting in on the fun. Kids blasting parents with streams of water or turning a valve to drench an older sibling or friend – followed by the opportunity for the other person to get immediate payback – starts the interactivity.

If a particular interactive component isn’t being used, the simple presence of a wheel or a lever or a pull rope invites the novice to give it a try. One expects a cause-and-effect response with these devices, which makes giving it a try very hard to resist. With controlled deck jets, for instance, you may be the first to be surprised – then you get to surprise other people after luring them over to the jet’s location. We call this the “gotcha factor.”

In studying the psychology of play, we’ve watched little kids keep at it all day long, indulging in the excitement over and over again. To make it work, the designer must anticipate opportunities for surprise and opportunities for retaliation. This draws the willing “victim” into the playing because he or she knows there will be a chance to get others wet.

The color, theme and layout of these systems also work to offer the user permission to play. These spaces are obviously designed for fun in which getting wet is the order of the day. In a sense, their very presence provides tacit permission to join in – and drench or be drenched.

Interactive water also provides for cycle after cycle of surprise attacks and retaliations and a new adventure and a different game every time, because there will always be new participants and different reactions. So while the features themselves can be simple, the opportunities for creative play are limited only by the imaginations of those who join in the fun.

Armed with this understanding of the psychology of play, designers of interactive waterfeatures need to combine a variety of individual elements to create environments that satisfy basic play needs. At that level, it’s all about putting these devices together in a way that works – combinations of features, their proximity to one another, their height, their colors and the flow and form of the water are all important in creating these systems.

When you break it down, an impressive array of interactive features can be combined in these play areas. At the designer’s disposal are bubbler or deck jets, water curtains, umbrella jets, overhead rope pulls, pipe falls, arch jets, slides, two-person reciprocating pumps, water-blasters, cannons, cascades from rooftops, tipping buckets and a range of hand-wheels and levers. 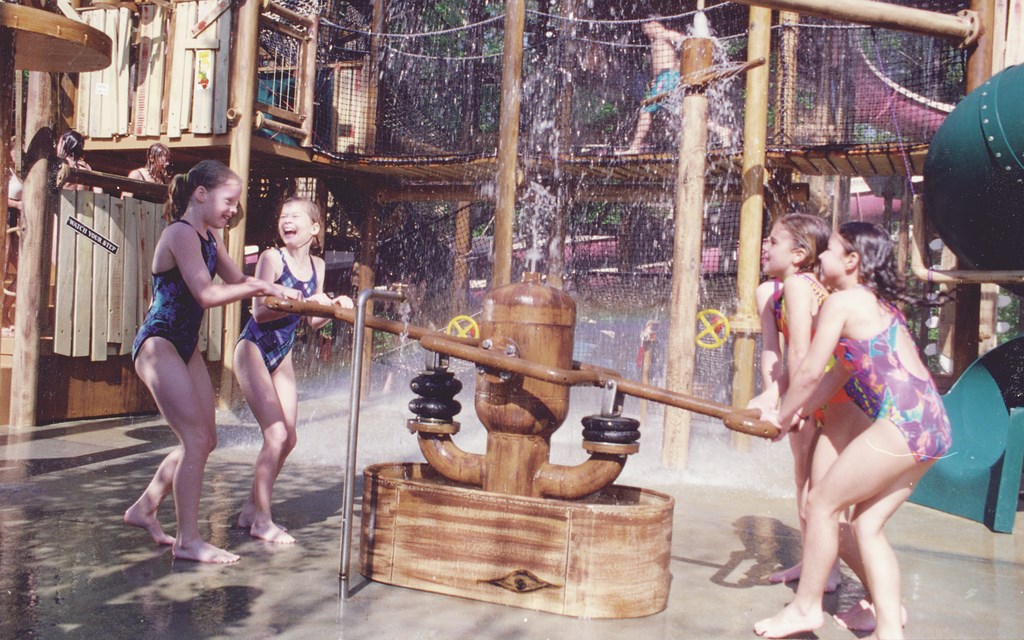 The structures themselves provide part of the variety and interest as well, with stairs, bridges and assorted landings, corridors and traffic patterns. Some larger designs mount up to three levels, creating new points of vertical interaction in addition to all of the horizontal action at deck level.

While SCS Interactive and other suppliers might be tempted to do no more than pull these components and devices off the shelf, each system is much more than the sum of its parts: Every element is selected and placed to maximize interaction with other components and people operating those other components. These compositions cover the spectrum from compact spaces to enormous, highly themed play environments that create worlds of fun.

All of this begins, of course, with the client. Often, they want to work within a theme – Caribbean-style pirate retreats, jungle tree houses, undersea kingdoms – and want whatever waterplay features are added to work with swimming pools or other components such as slides. In some cases, however, we’re called on to create a waterplay area as the central element in a recreational setting.

In most cases, the bodies of water we work with aren’t designed for swimming. The vessels we set up have depths ranging from zero to 18 inches – enough to play in without complete submersion.

And there is no waiting in line: These systems can be accessed from all sides at any time – just jump in and go. Even with popular individual interactives, players will move on after a while to seek fresh opportunities for fun. And with multiple levels, you can take advantage of sky space, which is appealing for facilities with limited square footage.

The size of an interactive waterplay area is determined by the anticipated number of users and the available space. Obviously, the smaller the development or community, the smaller that waterplay system can be. By the same token, if high user levels are anticipated, the more elements a system will need to keep players busy and engaged. 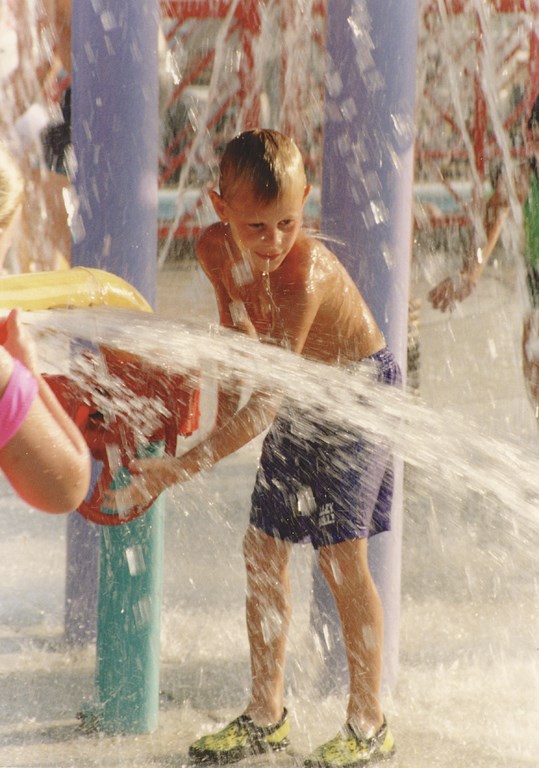 Naturally, the number of elements desired and the available footprint dictate the size, scope and budget of these projects. In our case, we’ve packaged several standard units, from three-feature systems for use in spaces as small as 17 by 17 feet – good for use by about a dozen people at a time – up to systems that include 50 play elements spread across footprints as large as 85 by 40 feet and usable by hundreds of people.

Installing these systems requires the participation of an experienced and competent contractor. We and other suppliers are at the ready to take care of installation ourselves or participate as necessary to make certain that systems are properly installed. We’ll also help manage costs by knowing, for example, where less-expensive coated pipes can be used in place of stainless steel. And we know how to set up hydraulic and control systems to maximize efficiency and performance.

We derive a great deal of satisfaction from what we produce, but the greatest satisfaction comes from observing the resulting family play.

While technology has developed so many solitary and passive ways of playing, the most satisfying play is still physical and simple – running through sprinklers, playing catch, waging squirt-gun fights, playing tag and doing “cannonballs” into a swimming pool. We therefore base our interactive design work on the basic and everyday magic of children’s play.

It’s very satisfying to provide these simple pleasures to people of all ages. The joyous mayhem that erupts in and around these features is truly infectious, and no matter how much time we spend on the business side of designing and selling these systems, we never tire or lose sight of their central purpose.

After all, we are all children at heart. Sometimes, we just need a little reminder.

Pam Pasotti is director of marketing for SCS Interactive Inc. in Tillamook, Ore., a division of Denver-based Koala Corp. and a manufacturer of interactive waterplay systems for waterparks, municipal aquatic facilities, resorts properties, semi-public properties and residential clients. Pasotti joined the company two years ago, after several years working in the computer manufacturing industry, where she developed her background in market research and sales psychology. Her decision to join the interactive waterplay industry was based in part on her desire to promote physical play and family interaction in today’s increasingly sedentary, isolated society.