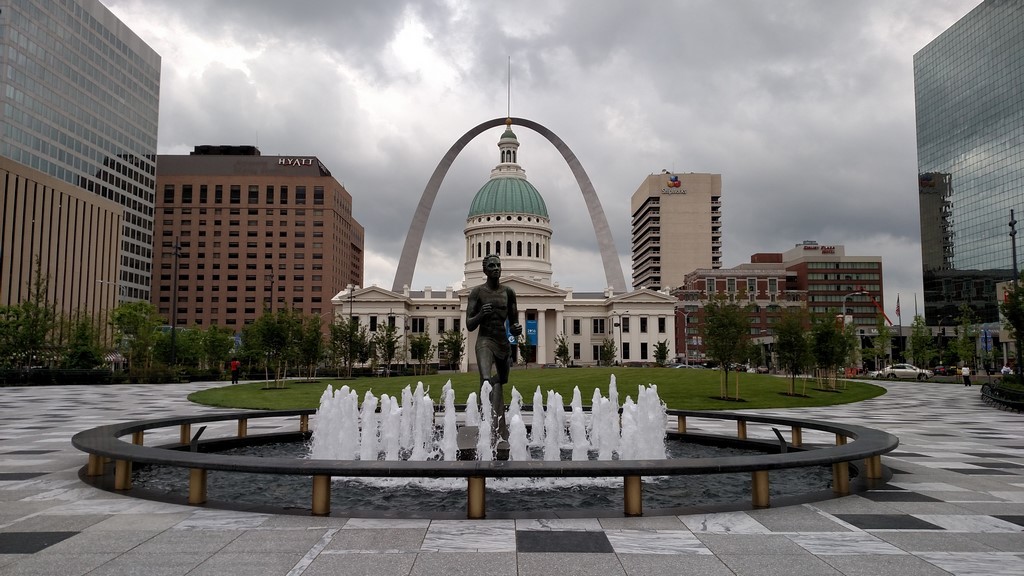 In my visits to St. Louis through the years, I’ve spent a lot of time admiring the compactness of its downtown district: There’s so much cool stuff within easy walking distance, from the Gateway Arch and the baseball stadium to numerous hotels and restaurants – not to mention several public plazas, sculpture gardens, fountains and waterfeatures.

Citygarden, which WaterShapes has covered extensively, is both spectacular and relatively new, with its array of ambitious sculptures and a long water wall made using the beautiful sedimentary stone you see alongside roads and highways throughout the area. There’s a general liveliness to the space that makes you glad to be there. 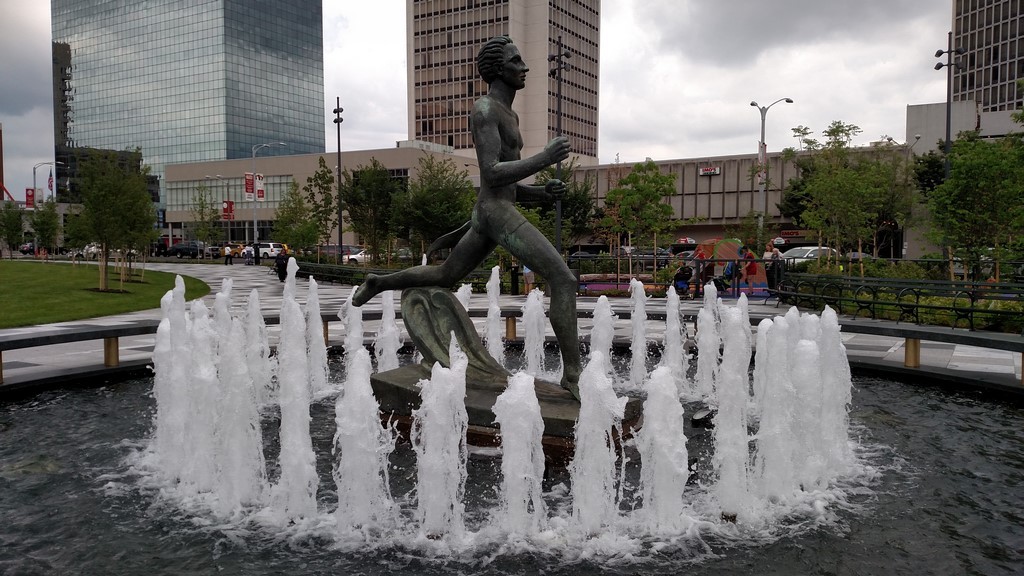 I also have fond memories of Kiener Plaza, which is perfectly situated with the Gateway Arch in the distance combining with a beautiful old courthouse as its arresting backdrop. I’d heard that the block had been revamped just recently, so on my last visit to see my daughter there, I made a point of stopping by to see what was up.

The centerpiece of the space was always The Runner, a sculpture by William Zorach that stood at the core of a large fountain basin. When I first saw it a couple years back, The Runner moved through the basin like a special-effects superhero, the water parting in his path to suggest great speed. As a former distance runner, I liked it a lot.

Imagine my disappointment when I saw the revised composition: The basin is considerably smaller than it was before, and now the poor runner is immobilized, pinioned mid-stride within a ring of fountain jets that rip away any sense of the formerly fleet-footed youth’s momentum or forward progress. 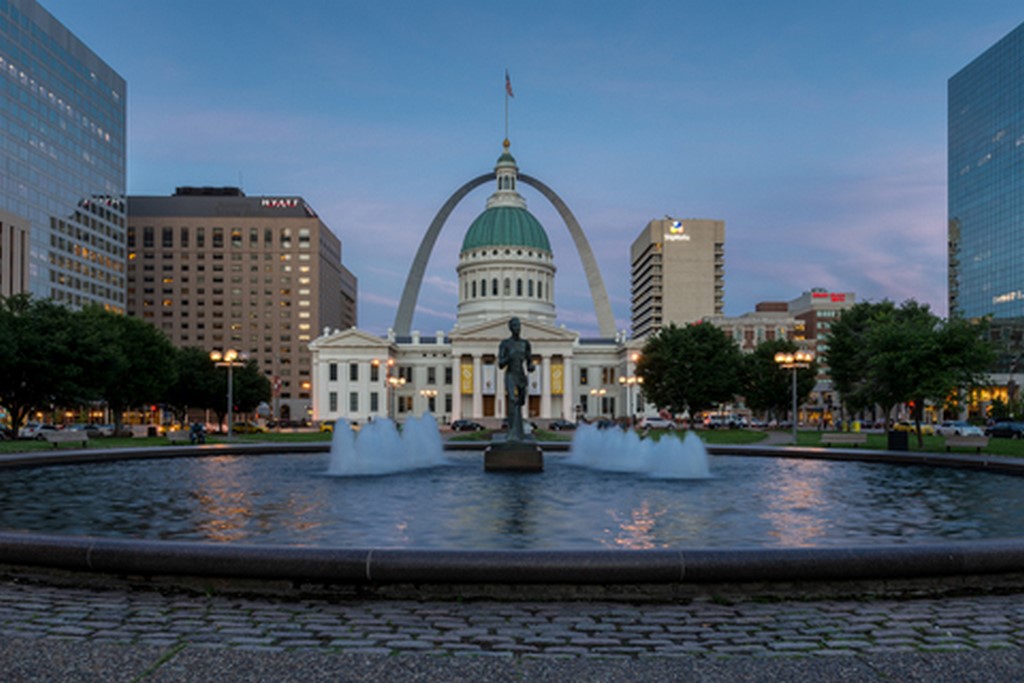 It’s a puzzling design decision. The sculpture had been removed for the duration of the remodeling project but was bound to come back, basically because Kiener Plaza is named for St. Louis native Harry J. Kiener, a boxer, wrestler and swimmer most renowned for his role on the U.S. Olympic track team that competed in the 1904 Olympiad in his hometown.

And eventually The Runner did come back – but I just can’t understand why he’s been figuratively hobbled within the fountain ring, particularly given how visually effective and utterly kinetic the old configuration had been. 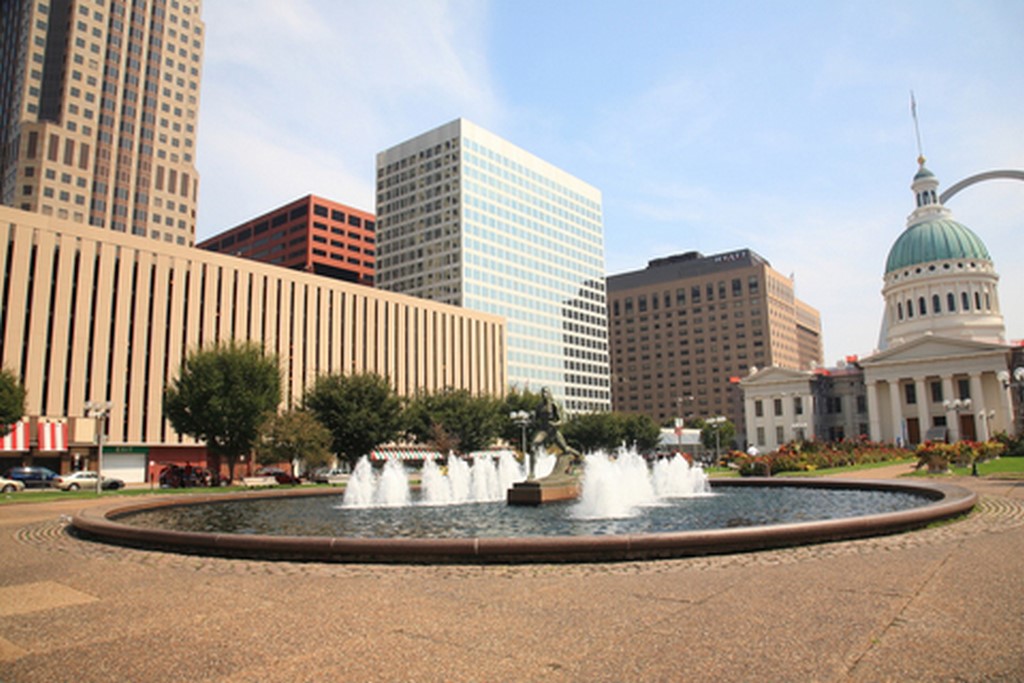 As before, the fountain is well-lit: Common practice has been to color the water red when the baseball Cardinals have a big home game, or azure when hockey’s St. Louis Blues are doing likewise. But really: Why on earth would the re-designers mess so fundamentally with success?

Here’s hoping people far more important than I have been distressed by this change and will petition the powers that be to cap the segment of jets directly in front of The Runner to give him somewhere to go. Better yet, maybe they can reconfigure the pipes and extend them in a way that at least suggests the old arrangement.

Whoever did this may have had solid reasons for doing it. To win me over, however, they’d need to be pretty damn good!