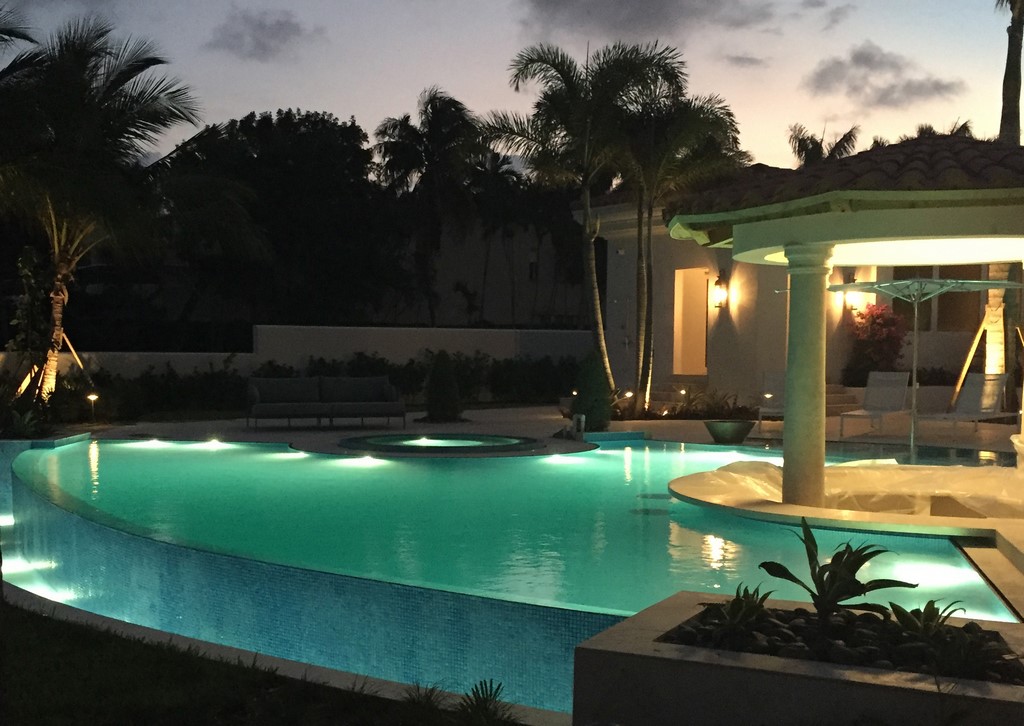 The lighting of pools is much more challenging than it once was, notes Graham Orme, mostly because their contours are so much more intricate than they were even 20 years ago. Here, he starts a new series that will guide all of us toward more ‘enlightened’ results.

There was a time when swimming pools were simple and mostly similar: They came as rectangles or in kidney shapes; they had either steps or ladders and, in many installations, some sort of bench in the deep end. If they had lighting, they were equipped with single 500-watt incandescent bulbs set in big niches on one end or the other.

Those days, happily, are long gone. Modern swimming pools come in all sorts of shapes and sizes and have so much more going on structurally and aesthetically that those familiar older pools look plain and primitive by comparison. Pools now come with vanishing edges, grottos, waterfalls, spillways, tanning shelves, bubblers, deck jets and spas – and their often-raised walls include scuppers, spouts and water bowls.

These new features and configurations make lighting a swimming pool a much more complicated task than was the case a generation ago. This calls on pool designers and engineers to broaden their thinking. What’s more, there are whole new technologies out there, and they seem to be improving, developing and changing at something approaching the speed of light, so now there’s an added burden of keeping up with the times.

To ease the process of expanding the way we look at the lighting task in and around swimming pools, the four articles in this series will start here with a philosophical and conceptual overview. The next three articles will get into specific lighting tasks and techniques for achieving them.

As a lighting specialist, I always start thinking about the needs of a specific pool with the Big Picture – that is, how the lighting system can be organized to meet the need for safety while also serving as a tool allowing for management of the poolscape’s mood and ambiance. 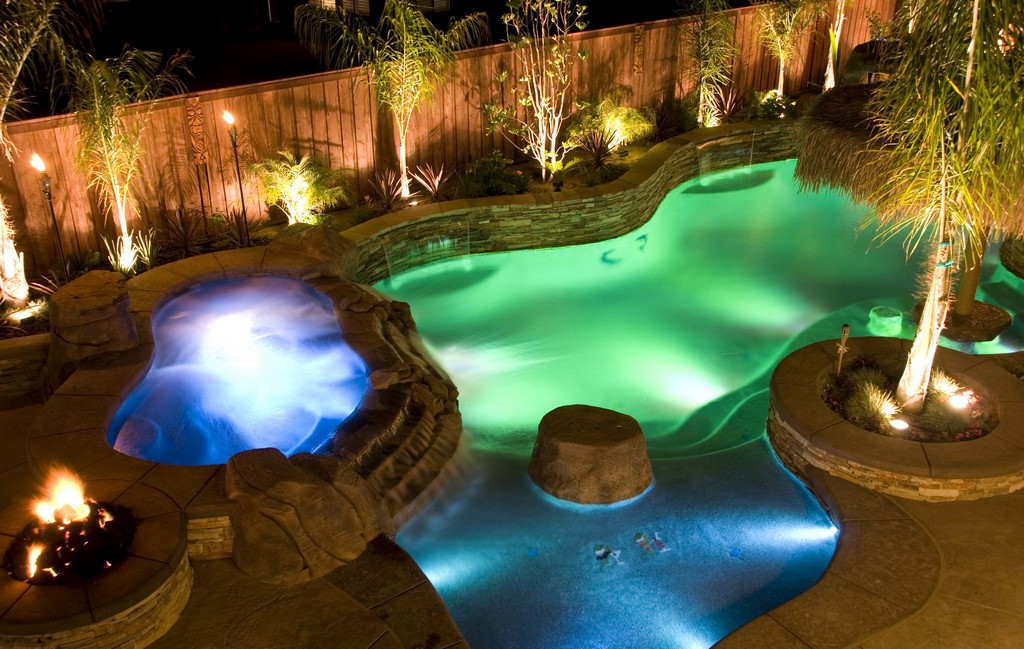 Here, my main mission is to integrate the lighting program into the design – meaning I never want the lighting to be perceived as something done according to some standard pattern and certainly as much more than an afterthought. This means considering the lighting component early in the design phase, at a point where input about the nighttime appearance of the poolscape can be another tool guiding the process.

Safety comes first. Anyone inside or outside the pool after dark needs to be able to navigate without risking stubbed toes or, much worse, a fall of any kind in or out of the water. This seems so basic, but as the internal and external configurations of swimming pools get more complex, the need for attention to such details rises exponentially. 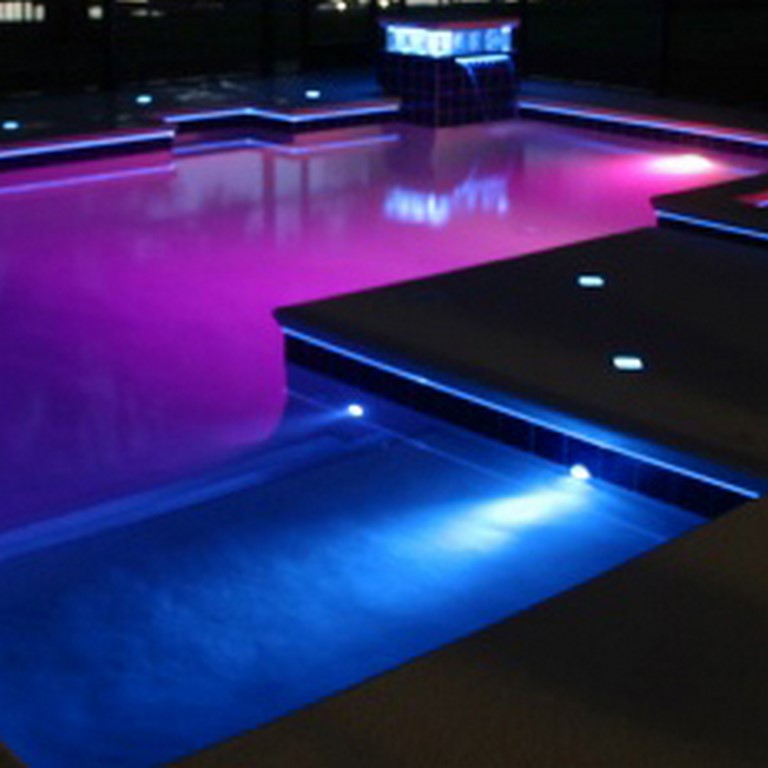 Mood and ambiance come next. The usual desire is to make the outdoor space so serenely inviting or so profoundly animated once the sun goes down that the homeowners and their families or guests will be drawn outside to enjoy the space, the warmth of its fire features, the sounds of its waterfalls and spillways, the allure of its grotto and the engaging qualities of the lightscape. This is largely a function of using easily dimmable light sources, but it’s also about fixture placement and orientation.

But there’s subtlety here, too, because mood management is also about colors, shadows, reflections, a sense of mystery and our other less-tangible responses to outdoor environments. In that sense, setting the mood and ambiance is an artful process that goes beyond the level of technology and practical skill required to make it happen.

All of this – even the safety component – is about making the poolscape as much an attraction at night as it is during the day. As has been discussed in many WaterShapes articles in the past, homeowners lead busy lives these days, and in many cases the only opportunities for them to enjoy their pools will come at the end of the day. Safety is important, but the ability to alter and manage mood and ambiance to suit the homeowners’ needs is paramount.

The great thing is, modern lighting systems are up to the challenge, with degrees of flexibility and subtlety that couldn’t be achieved even a few years ago. For purposes of this discussion, we’ll stick exclusively to LED options, mainly because their use requires unusual thought and care in the design process.

The best feature of LED lights is that they are, compared to older incandescent and fiberoptic options, so wonderfully compact. Where one big incandescent bulb bombarded a pool with a single source of light and long strips of fiberoptic cable brought a warm glow to a pool’s perimeter, it’s possible to use multiple, targeted LED fixtures to accentuate intricate pool features and enhance the visual experience. 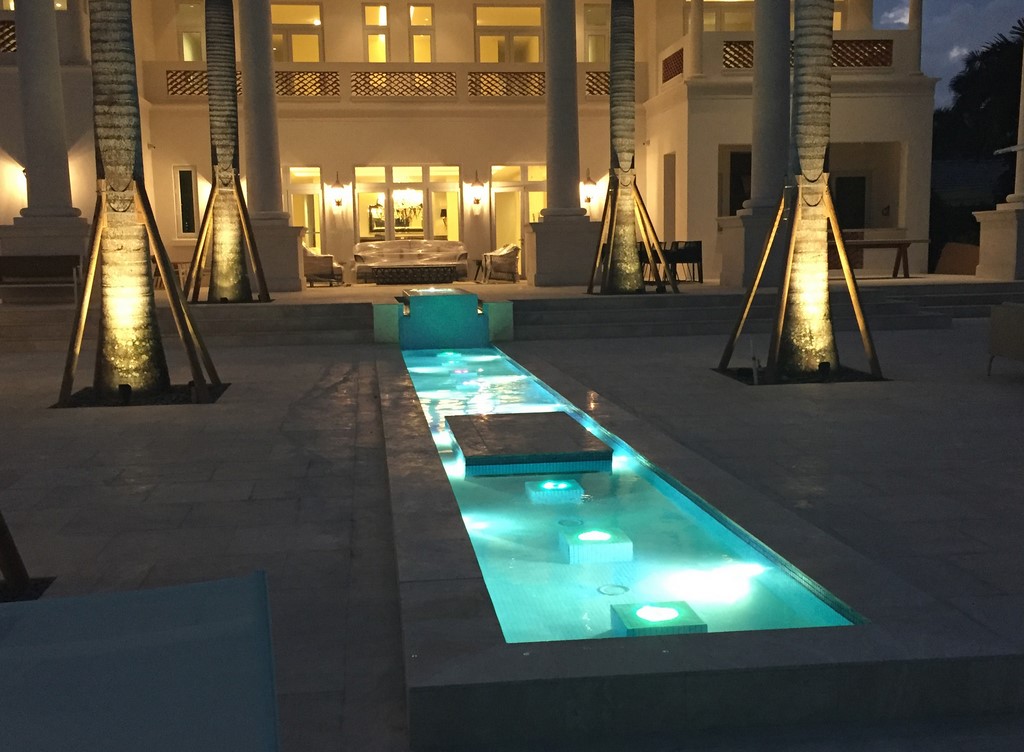 The direction in which these LEDs point is one big key to the nighttime experience of the pool. As was also the case with incandescent lights, it’s always desirable to position the fixtures so that their beams point away from the house and its primary viewpoints. But unlike older lights, LED fixtures are generally placed higher in the walls, so the challenge of orientation can become a bit more urgent.

In fact, this factor is important enough that, as was suggested above, making decisions about lighting early in the process can have a profound influence on how the pool is laid out and its features are positioned. You never want the homeowners and their guests to be blinded by beams of light – but you still have the responsibility to make certain they have safe passage while in the water and can get in and out of it without incident. 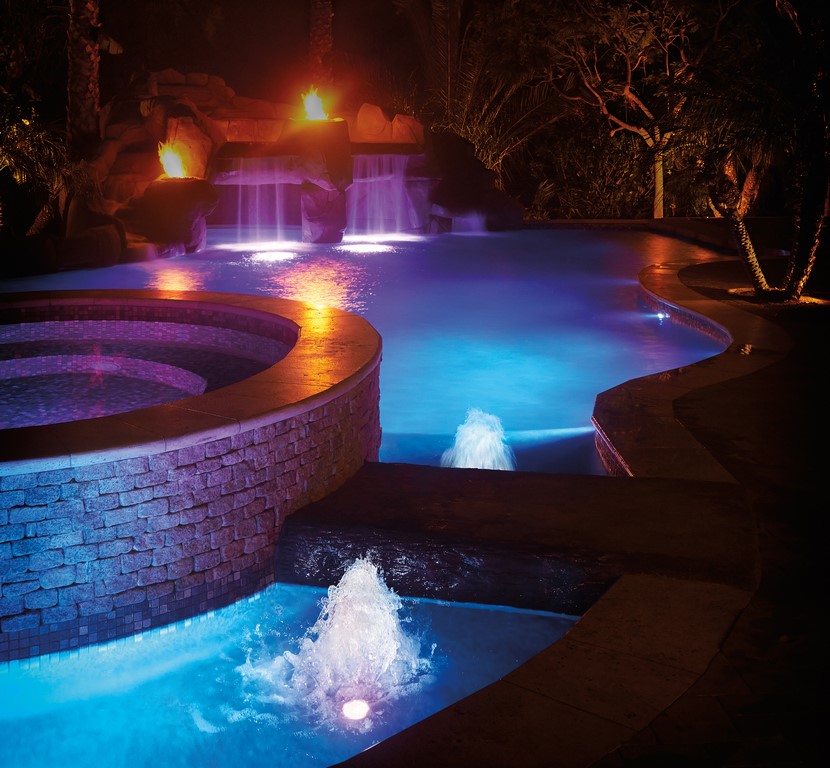 The goal in organizing a lighting scheme is to eliminate dark spots while avoiding hot spots and creating a beautiful, even glow throughout the pool. This typically means placing multiple low-voltage lights around both the deep and shallow ends at a uniform level between nine and 12 inches below the waterline.

On tanning shelves, where the water is shallower, the lights should be positioned four inches beneath the waterline. In spas, lights should be placed in the footwell – and definitely not in seat walls where someone might end up resting his or her back against a light fixture.

In square or rectangular pools, you can attain an even distribution of light by spacing fixtures about eight feet apart along the wall not facing the home. For pools with curves and turns, lights should be placed with the assumption of a 60-degree beam spread. (The actual spread may be wider, but the light within the 60-degree arc will be of the most desirable intensity.)

But these rules of thumb go out the door when more intricate configurations and surfaces are involved – if, for example, there’s an interior mosaic, or maybe rockwork that reaches below the waterline or some other feature that merits detailed nighttime attention. In these cases, supplemental lights may be required.

And then there’s the factor of intended use: With a lap pool or swim lane, for instance, the lighting should always hit the swimmer lengthwise rather than head on for all sorts of obvious reasons. And as suggested above, all safety-related areas – steps, benches, entrances and exits – should be evenly and thoroughly lit.

We’ve covered a lot of ground here, and now it’s time to move on to the next part of the series, where we’ll start getting much more specific when it comes to lighting techniques related to specific pool types, details and features. Before we move on, however, it’s important to make a few key technical points.

First, in system design, it’s important to make sure all lights are on the same on/off circuit. This is particularly important if you intend to synchronize lights in any kind of choreographed or coordinated display.

Second, use the right transformer, upsizing it to make certain it has the capacity to handle surges. For example, if you end up including five 20-watt LED fixtures in a lighting array, don’t settle for a 100-watt transformer, which will have no spare capacity. A better choice would be a 300-watt unit: Not only will it handle surges, but it will also allow you to include some additional fixtures in the system as needs arise.

Third, always test your lighting arrays at the appropriate voltage to avoid damage to low-voltage fixtures: A good jolt of line-voltage current will likely fry low-voltage LEDs. Fourth, it’s always a good idea to stick to one supplier’s wares for a job’s lighting requirements: Mixing lights with an alien transformer or control system can lead to mixed or disappointing results!

Fifth, make certain the transformer and any control system have been certified as safe for use in aquatic systems by a nationally recognized testing laboratory. It’s an assurance to both you and your clients that the system you’re installing will be safe for their use and enjoyment.

Finally – and this is a non-technical point – recognize and accept the fact that the pool-lighting challenge is nothing like it was even ten years ago. There may be a learning curve involved in keeping up with and making the most of rapid advances in the field, but there’s also an incredible opportunity to make pools and their environments more beautiful, more responsive the their owners’ needs and a fuller expression of your skills as a watershaper.

As changes go, the ones having to do with lighting are of the best kind – as we’ll see in detail in three articles to come.

Graham Orme is product and custom design manager — lighting and water features for Zodiac Pool Systems in Vista, Calif. He may be reached at [email protected]