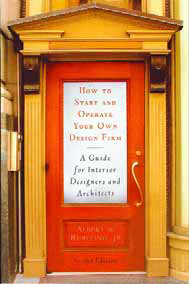 If there’s one thing most designers of all types have in common, it’s that we tend to possess built-in senses of personal independence. I believe that’s why most of us, at some point or other in our careers, consider taking the big step of going out and starting our own practices.

I haven’t done that as yet, and a big part of the “why” has to do with knowing that a great many of those who do hang their own shingles wind up failing – often sooner rather than later. Yet even though I enjoy the security of working for a company rather than running one myself, I must confess that, for a long time now, the idea has intrigued me – if for no other reason than I want to know what it takes to make a go of it.

That’s how I came to pick up a copy of How to Start and Operate Your Own Design Firm by Albert W. Rubeling, Jr. (2nd edition, Allworth Press, 2007). This 240-page text offers a wonderfully thorough discussion of the challenges I’d always imagined, and I think it would be of use even to those who are already up and running in addition to those who are only contemplating or curious about taking the plunge.

The author obviously has a clear understanding of the designer’s mindset and points out right away that there are just two basic reasons people strike out on their own: They’ve either been forced to because the companies they were working for have gone out of business, or they want to be doing something different from the work they’re doing for their current employers.

He then drives home the point that most designers have no clue what it takes to beat the odds and see their new businesses survive past the first two years. As he points out, we designers may be extremely talented in our areas of design expertise, but as businesspeople we are generally unprepared.

Early on, he offers a questionnaire that asks readers to reflect on their goals and think through some basic plans and possibilities. He then breaks things down into a series of extremely practical considerations of financing, marketing, partnerships, employees, facilities and a range of other important issues.

Next and most helpfully, Rubeling deconstructs all of those areas with in-depth discussions of what you need to encompass in your planning before you take the leap. In the chapter on partnerships, for example, he points out that a majority of new design firms are formed by two or more professionals. Those that succeed, he says, are the ones in which there’s a clear understanding of a division of responsibilities within the operation; conversely, those that fail are often the ones in which partners possess (and want to exercise) overlapping sets of skills.

That illuminating discussion is followed by chapters on developing marketing plans; working with accountants, attorneys and insurance agents; setting up offices; dealing with tax issues; managing employees; and tips for setting up weekly, monthly and annual goals. Perhaps most important, he tackles the issue of what you need to charge relative to your operating and fixed costs in order to be profitable and ultimately meet your long-term financial goals.

The book concludes with an extensive list of other resources, some of which, I’m guessing, will be the subjects of future columns.

When I finished this book, I understood more fully than I ever had that success in establishing a new practice requires designers to be good at what they do – and smart businesspeople as well. To work both sides of that equation, you need to come to the process armed with just the sort of information I found in this slim volume.