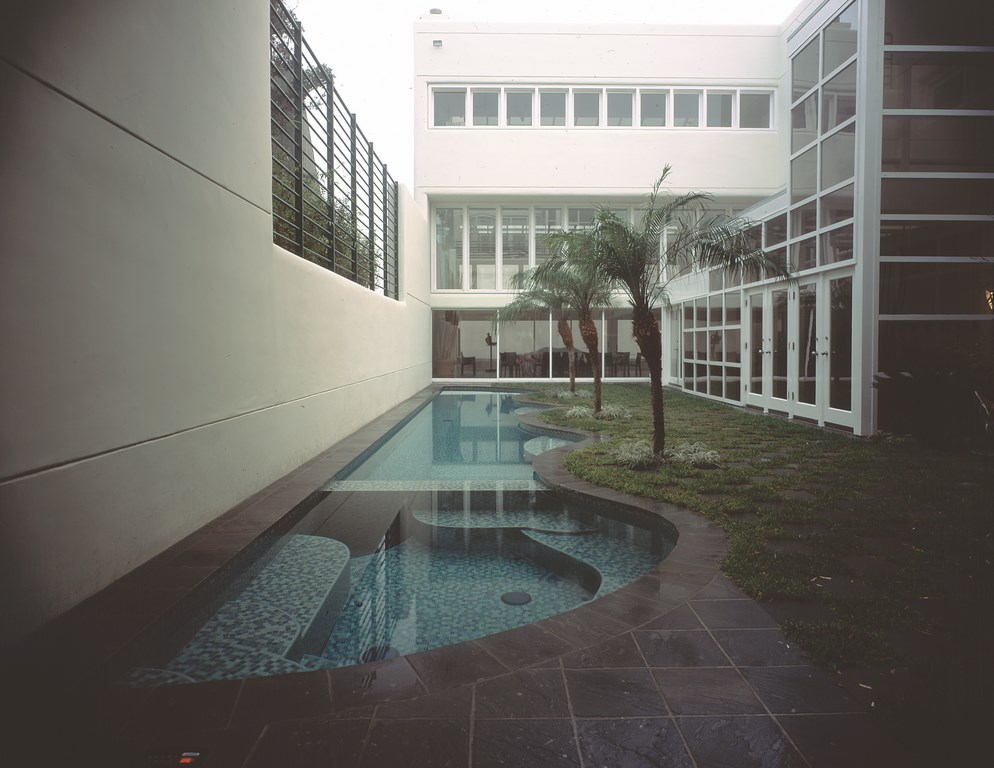 When you look at this project in finished form, there’s no way to see the months of struggle or the overall level of difficulty that went into its creation.

You don’t see the fact, for example, that we discovered while excavating the courtyard that the house itself was in imminent danger of collapsing. You don’t see that the narrow access way buckled when we first started working, or the ugly trauma of the broken septic tank. You can’t see the continuous changes in thought, direction and design that went into the deck, or the tremendous time and effort required to make the complex system of laminar jets operate as planned.

Instead, what you do see is something serene and beautiful and, perhaps, some evidence of the tremendous amount of thought and planning that went into the setting’s many fine points and details, especially the gorgeous tile on the pool’s interior and the select bluestone on the deck.

More than anything, what you now see is a spectacular home perched on the edge of the Pacific Ocean with an elegant courtyard and watershape that complement, enhance and complete a wonderful setting.

Coordinating and balancing the clients’ desires and evolving wish lists with the on-site realities of the construction process required great effort and flexibility on the part of every subcontractor who participated in the project. That balancing act came to define a huge portion of my working life for an unusually long time.

Staying focused and on top of the game in such situations extends from the mindset you bring to the process. I recently described this mindset as “lish thinking,” a term I’ve long used that is roughly equivalent to the concept of “thinking outside the box.” So far in my lengthening career, I’d have to say that this project is the best example of this type of thought process I can muster.

Executing a project with so much complexity, with so many surprises and distinct changes in direction, requires an ability to break away from the conventional thinking and construction practices that characterize the majority of watershaping projects. Then there’s the fact that I was working to satisfy a most opinionated and discriminating pair of clients – all while standing by rigorous standards for craftsmanship and construction techniques even as they became increasingly frustrated with the duration of the process.

I was thrilled when I learned that Crystal Fountains is using an image of the project in its latest advertising campaign – a wonderful affirmation of the beauty of the overall design and the appropriateness of the laminar jets in this contemporary setting. But I’m even more pleased to know that the homeowners use the pool regularly and say it’s now a source of tremendous pride and satisfaction for them as well.

When you stop and consider the nature of their surroundings in this exclusive residential enclave, the delight they take in courtyard and watershape is truly the icing on the cake.

A TREAT FOR THE EYES

I’ve devoted several months’ worth of “Details” columns to the tortured process of making this project a reality. I won’t revisit that odyssey – other than to suggest that everything having to do with this project tests the notion that standard pool industry practices or thinking have any place in the world of custom design and construction.

If you need further consideration of that point, I encourage you to revisit those columns, which started in the October 2002 issue and ran through May 2003).

From start to finish, I learned a great deal from this endeavor, and I know as I write this that I can’t even anticipate how those lessons will inform, alter, shape and influence work I do in the future. I suspect there will never be a job quite like this one, but I know that, ultimately, the process I engaged in here was all about creating art.

When you stop and think about it, such works of art really wouldn’t be worth as much to the artist if they came easy. 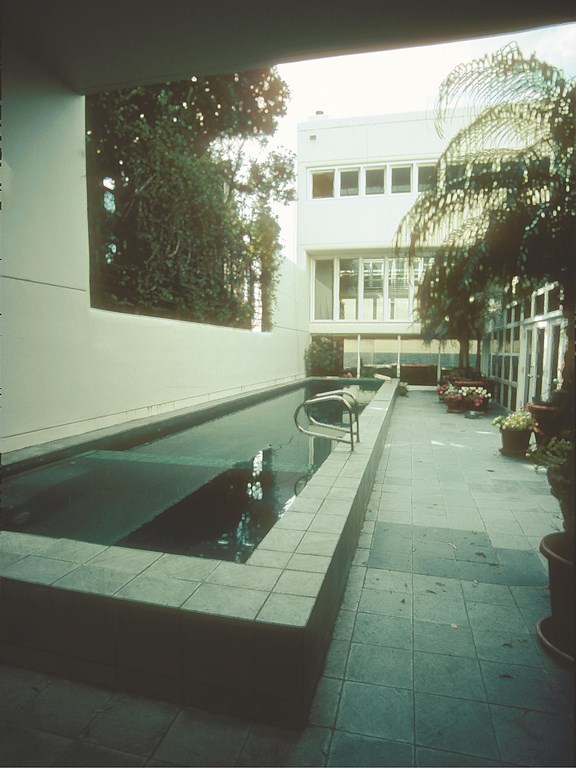 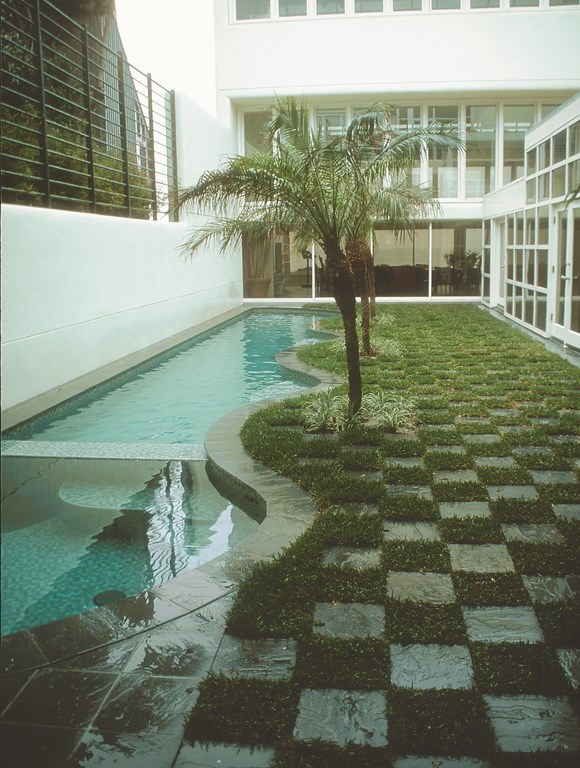 The former pool was unimaginative and intrusive, dominating the courtyard space with its raised rectilinear form (left). The replacement opens the space and has become a sculptural feature that’s right in step with the clients’ artful and art-filled surroundings (right). 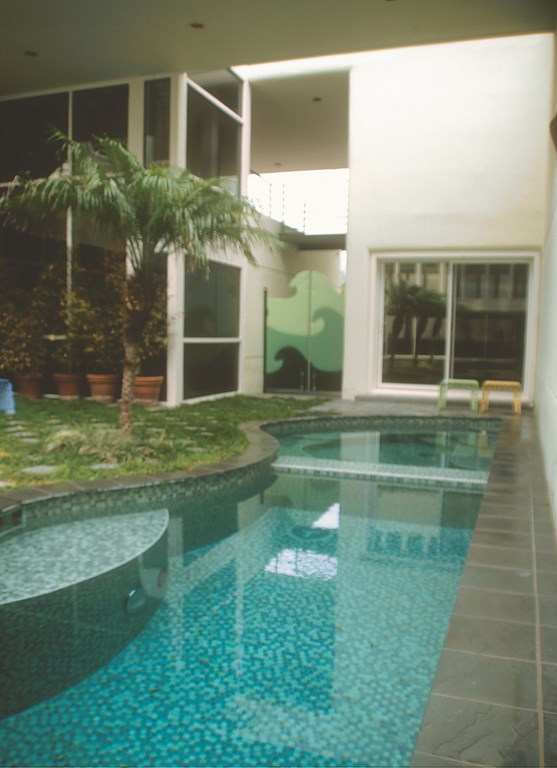 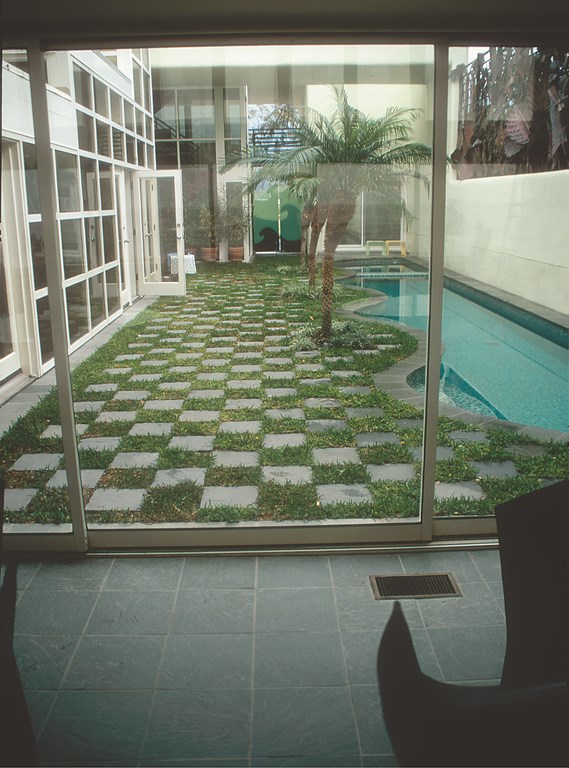 The watershape is a collection of qualities that lend a special feeling to the space by offering amazing reflections of the dramatic surrounding structure (left), by aligning the exterior gridwork precisely with the interior flooring (middle left), by filling the space with warm, iridescent textures and colors (middle right) and by setting up contours that delight the eye and invite participation (right) 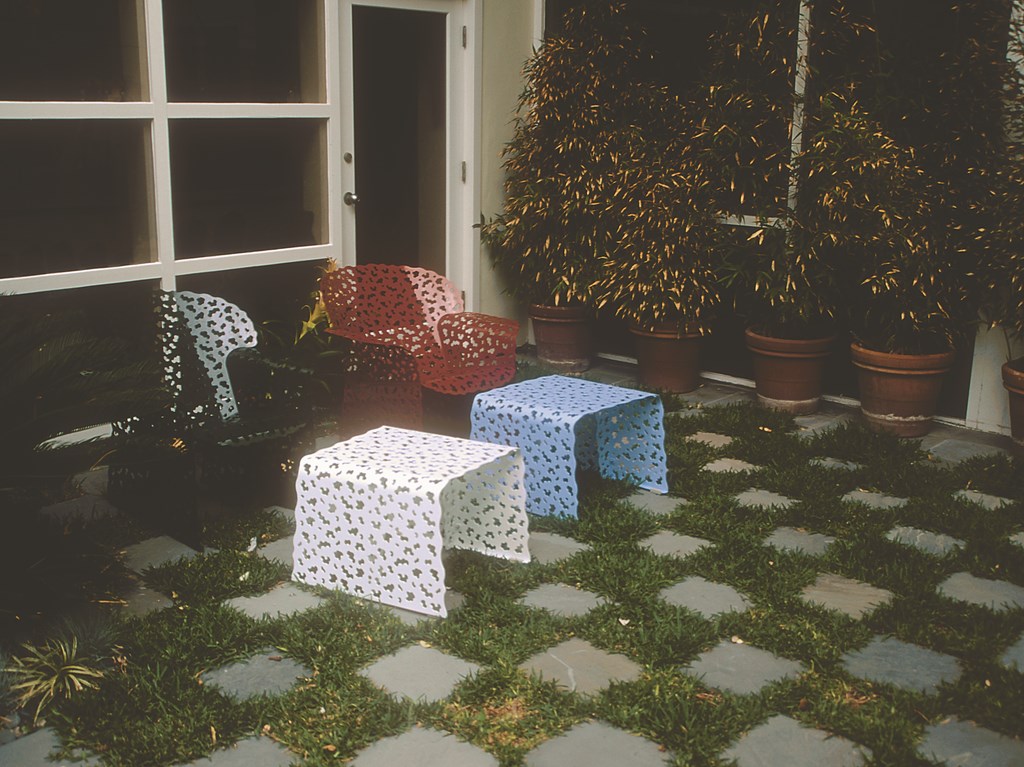 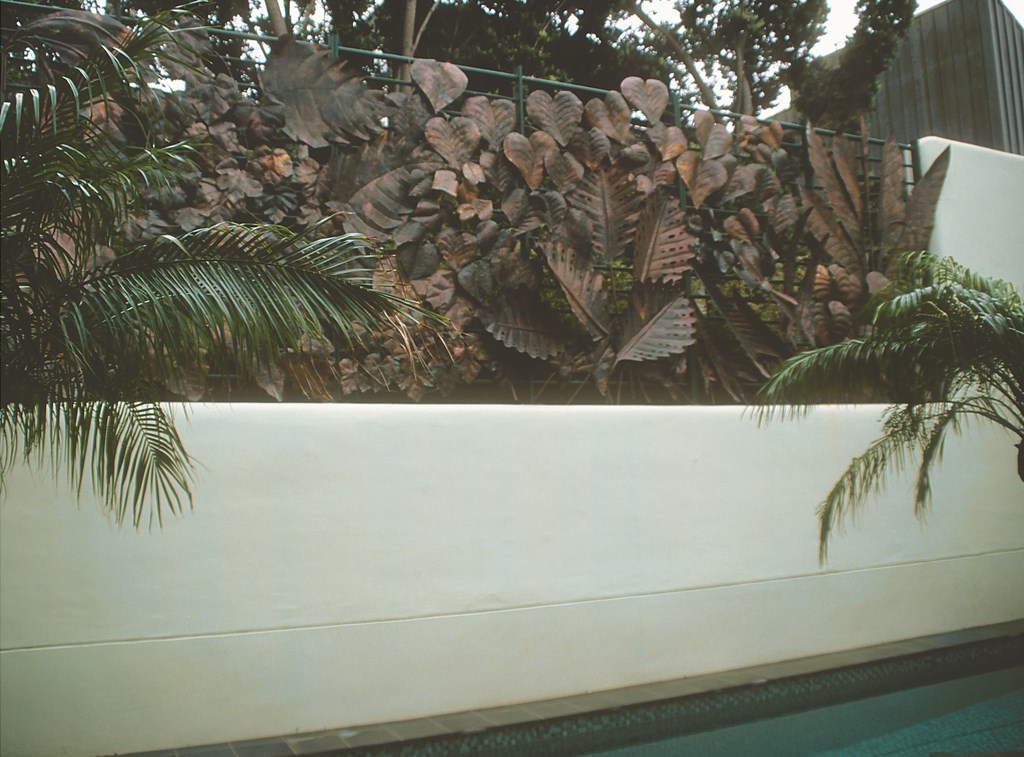 Once the watershape was complete, the homeowners kept on going with the courtyard, filling the space with wonderful furniture (left) and spectacular artwork (middle) that will only become more beautiful as the sea air brings it a green patina. The gate was there before (right), but its waveform is a perfect complement to the watershape’s graceful edge. 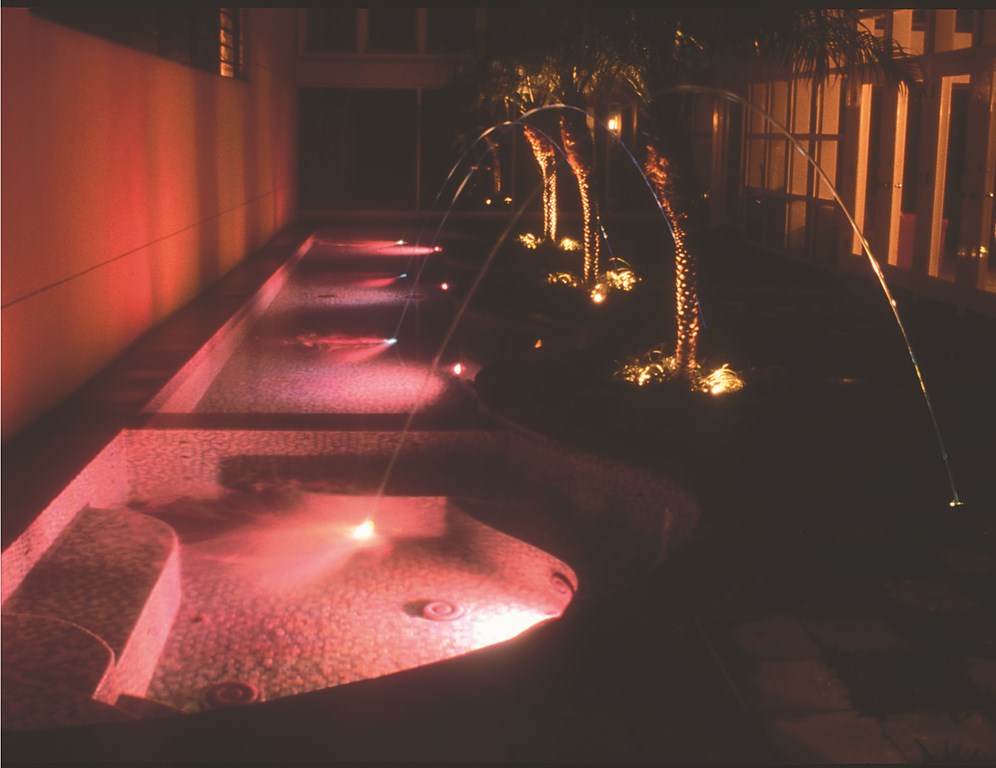 With the laminar jets turned on and the space seen at night, a whole new felling overtakes the watershape and the courtyard. There’s incredible computational power behind the system, and the sight of a red-lit pool gradually turning purple as blue laminar streams flow into the water (just one of many special effects) is something that must be seen to be believed.