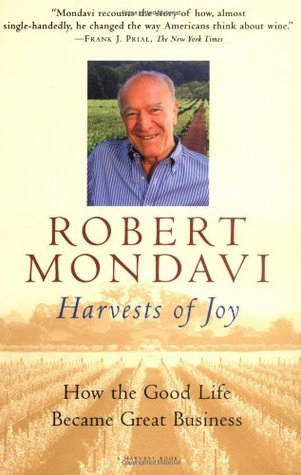 In the premiere issue of WaterShapes in February 1999, Brian Van Bower’s first “Aqua Culture” column invoked the name of winemaker Robert Mondavi, calling him a role model for watershapers everywhere.

It was a partly surprising place to start a new column, given the fact that Mondavi is neither a contractor, engineer or designer, but Bower, a wine connoisseur as well as a trailblazing watershaper, made a good case for seeing Mondavi’s career as a lens through which we might better understand our own.

At the time, I didn’t completely appreciate the connection between Mondavi and the watershaping trades, but I decided a bit later to pick up the book, Harvests of Joy, and spend some time with it. Prepared by Mondavi with writer Paul Chutkow, the 364-page book was published in 1998 by Harcourt Brace.

I know that this is quite a departure from the design-oriented texts I’ve been covering and that, in a literal sense, it doesn’t have anything at all to do with the business of designing and building recreational and decorative waterforms. That said, I’d argue that Mondavi’s story presents a magnificent set of lessons that I find enormously inspiring and directly informative. In fact, perhaps more than any other book I’ve read for the purposes of improving what I do for a living, this is the one that I find myself returning to over and over again.

In the book, the winemaker relates his life story as something of a lead-in to a dramatic account of how he transformed the wine industry in California’s Napa Valley and ultimately throughout the entire country. He starts with his family’s immigration from Italy to Minnesota, where his father, Cesare Mondavi, became a grocer and saloon owner. When Prohibition hit, the senior Mondavi began importing grapes from California to meet fellow immigrants’ need for their own homemade wines – always legal for personal consumption.

Soon after, the Mondavis moved to Lodi, Calif., where the family began to supply the area’s small cache of wineries. The book goes into great detail about how much the younger Mondavi learned through this process of helping others make their wines and about how he and his brother, Peter, came to establish the family’s first vineyard and winery operation just after World War II.

This is a wonderful tale of ambition, hard work and family values and should be inspiring for most anyone. But where the book begins to resonate for watershapers in general and for people in the pool industry in particular, I think, is in later chapters in which Mondavi describes a real revolution in the California wine industry.

Through his own perseverance and insistence on quality, innovation and education, Mondavi single-handedly elevated the industry’s standards. He helped bring prestige to the Napa Valley and was instrumental in promoting the area as a tourist stop – all to drive demand for premium wines. In other words, rather than relying on volume sales and mass production, Mondavi shifted the focus to quality products and steady innovation as a means of expanding the industry and elevating its profile.

If you follow this magazine with any degree of insight, you’ll know that concepts like these have been repeated time and time again and that, as watershapers, we’re all pretty much in the middle of a work in progress. What Mondavi’s story gives us is a view of the fruits of those ideas, post-transformation.

In his industry, concepts of quality, craft, value and artistry have overcome mediocrity and put it in its place. It didn’t come easy: Mondavi took chances and endured great skepticism, criticism and even ridicule – and certainly not everything he touched turned immediately to gold. Yet he stood his ground and staked his claim in vineyards that gave rise to a flourishing, reshaped industry.

For my part, I see Mondavi’s story as a compelling blueprint to those in our industry who are interested in elevating their own careers by creating finely crafted works of art. His book is widely available in paperback and is much less expensive than many of the other publications I have covered to date or will discuss in the future, but it’s value is like that of a fine wine: It becomes more valuable and impressive every day.