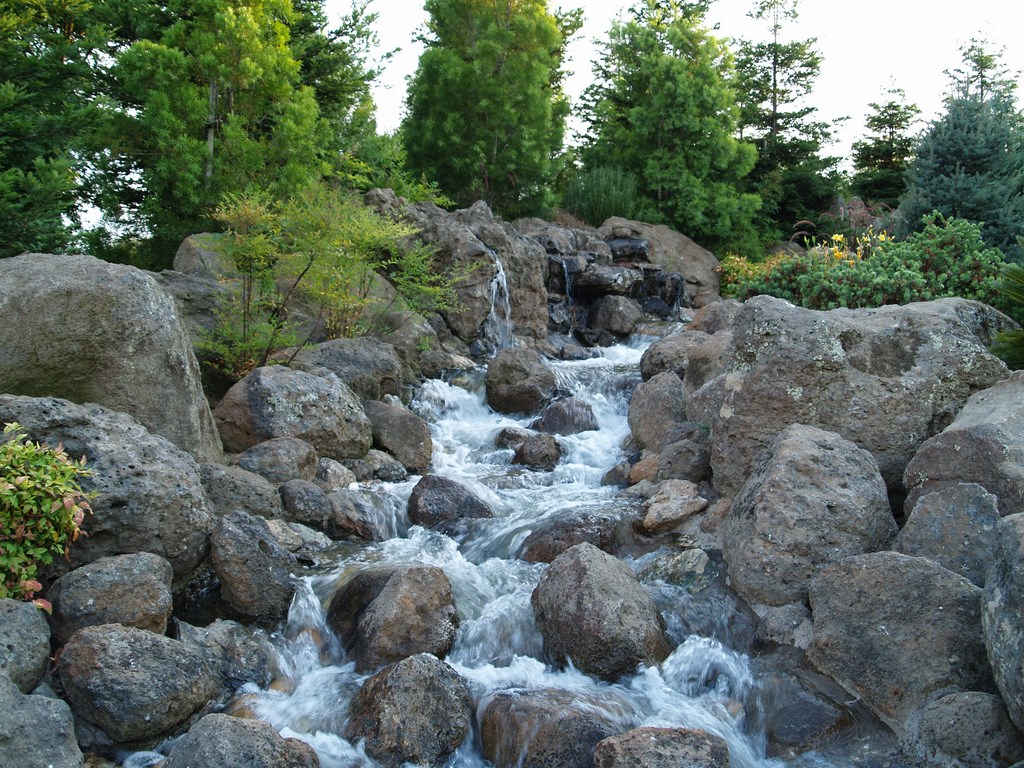 I’ve always believed that if you’re going to do something, you should do it so well that the results are beyond compare.

That basic philosophy has guided our company, GCS of Woodbridge, Calif., from the very start. It has led us to apply the highest standards to every one of our projects, all of which have been executed on large estates for ambitious, affluent, selective clients who invariably want something no one else has.

We’ve been selective from the start as well, seeking clients who are in the process of creating the homes of their dreams and who want to have fun with (and in) their exterior spaces. In most cases, what they want are true oases – resort-like settings that give them a taste of

the exotic just beyond their own doorways.

The upshot is, everything we do is unique and is executed on a massive scale. The project featured in these pages fits that approach in all respects, with its two enormous waterfalls, acres of highly detailed landscaping, extensive natural rockwork, an expansive landscape-lighting system and a miniature town.

This also happens to have been our very first project, and I concede that we learned a great deal about the process and the nature of working at this level in a hurry. And it’s no small point of pride that our achievements here are not only befitting a spectacular home and its rustic atmosphere, but also satisfied the homeowners, then and now.

My involvement with these clients developed quite by chance: I was writing a magazine article about my client’s company at about the same time I was launching my landscape business. As luck would have it, my subject and his family were in the process of building their dream home and upgrading the surrounding property. When I told him what I was up to, he asked me to visit the site.

What I encountered was an 80-acre property south of Sacramento, Calif., near the foothills of the Sierra Nevada Mountains. There were already two man-made lakes, one covering seven acres in an area of the backyard that had been beautifully landscaped and would need little work, the other covering five acres at the front of the property, where something had to be done to make the sort of dramatic statement the homeowners wanted to make with waterfalls and extensive plantings. 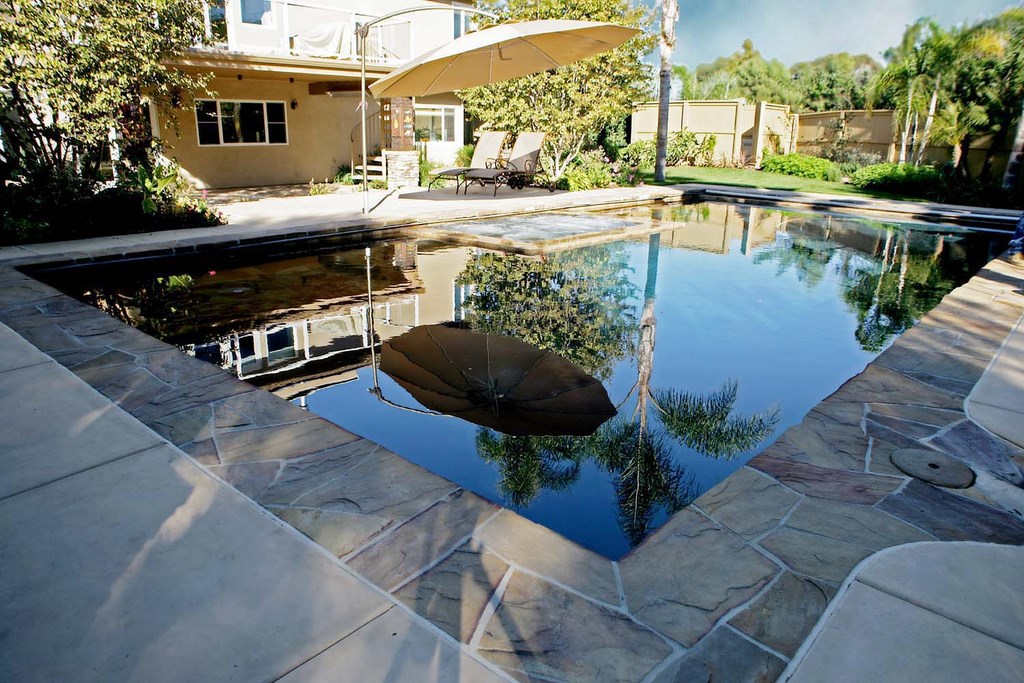 The property also featured a quarter-scale train that ran around the estate on a mile and a half of track. (This circuit came complete with a train yard and a roundhouse with a six-bay turntable.) At the time of my visit, construction was just beginning on a 17,000-square-foot home that now graces the property and overlooks the lakes and waterfalls.

As we rode around the site on the train and he explained his vision, any thought I had that he was simply humoring me gave way to the thought that we were an extremely good fit. This was exactly the type of project that I had envisioned as our company’s focus, and I was ready to dig in. 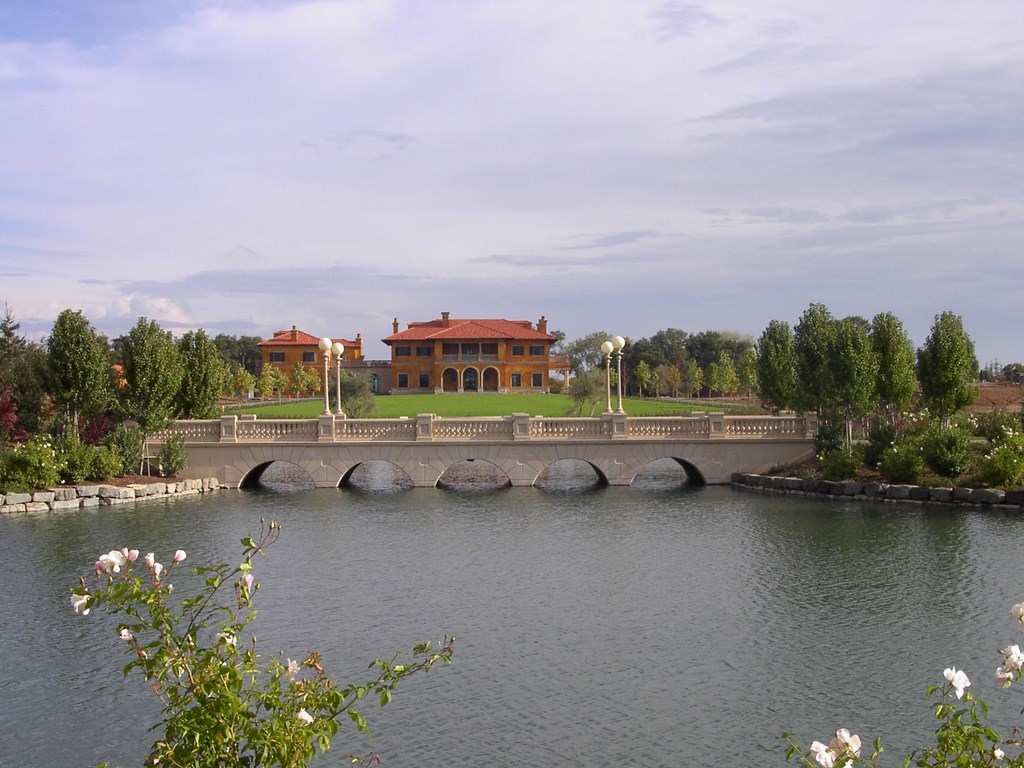 Absolutely, it was a leap of faith on his part, but although I was new to the watershaping/landscaping business at that point, I have a technical background and have also had my general contractor’s license for 24 years. In our discussions, I apparently said the right things in sufficient quantity that he was confident from the start that we were the right firm for the project.

I immediately appreciated his belief in us, but even I was unprepared when he gave us absolutely free rein to design and build the watershapes as we saw fit – a trust and confidence that remained in place for the full three-year duration of the project.

We did a great deal of research and planning before our work began on site and we were mentally prepared for the tasks at hand, but working at this level and with this much independence right out of the gate threw us onto an incredibly steep learning curve. Remarkably, the work unfolded without a hitch, and I credit that success to four key factors: an ample budget, a fantastically inspiring site , a great crew and, most important, a client who was steadfastly supportive from start to finish.

Our work was largely confined to a 15-acre space around the five-acre lake at the front of the property.

In addition to two large waterfall systems that feed into the lake, we also installed extensive landscaping, two large arbors, a stone deck, all of the irrigation, drainage and lighting systems and the aforementioned miniature town, which includes an appropriately scaled waterfall/stream system of its own (for details, see the sidebar just below).

The majority of our work focused on the two main waterfalls – both huge and featuring flow rates of 3,000 gallons per minute. Indeed, we started with that target flow rate (which extended from the client’s desire for drama) and designed the systems back from that point based on the aesthetics of streams and waterfalls commonly seen in the Sierras.

As is true of most serious, quality-oriented stream, pond, lake and waterfall builders, I’ve spent a great deal of time walking in natural settings and making detailed observations on the way nature does things – insights we definitely applied in our work here and elsewhere.

In this case, however, the waterfalls were to have completely different characters: The first, known as the Greenstone Waterfall, is a dramatic semicircular structure 12 feet high and 60 feet wide – a rough reproduction of the famous Horseshoe Falls on the Niagara River. Train tracks run across a bridge that passes over a section of smaller cascades about 40 feet in front of the straight-dropping falls.

We used more than 400 tons of greenstone material quarried in the local foothills in this composition. The largest individual stone weighs approximately 30,000 pounds, while the average is closer to 5,000 pounds. This system is so vigorous when it’s running that it actually creates its own breezes.

The other large system has been dubbed the Moss Rock Waterfall and features 550 tons of moss- and lichen-covered fieldstones (the largest weighing in at 25,000 pounds) harvested from the highway leading to Yosemite National Park. The basic concept with this waterfall was to simulate the cascading falls and streams common in the nearby mountains.

In all, the second system encompasses 125 feet of cascades that flow into the lake through two large pools and two stream sections. It also includes 14 separate “springs” that emerge from core-drilled rocks at various spots, enhancing the flow over a streambed filled with large, smooth river rocks and three different sizes of cobble. A 32-foot wood-and-metal footbridge spans the lower portion of the falls – right at the point where it enters the lake – and leads to a stone deck offering great views of the falls.

Our ambition in selecting materials and installing these waterfalls was to create systems that would last for upwards of 300 years – a goal that required us to work to the highest possible construction standards.

Our motivation to do so emerged from our research into the pond/stream industry, where a great many operators who get into the business often end up getting out of it relatively quickly because the systems they’ve installed aren’t durable and are inclined to fail. As we saw it, these business-killing problems extended either from the installers’ lack of familiarity with heavy-duty construction principles (especially related to concrete) or from a desire to cut corners. 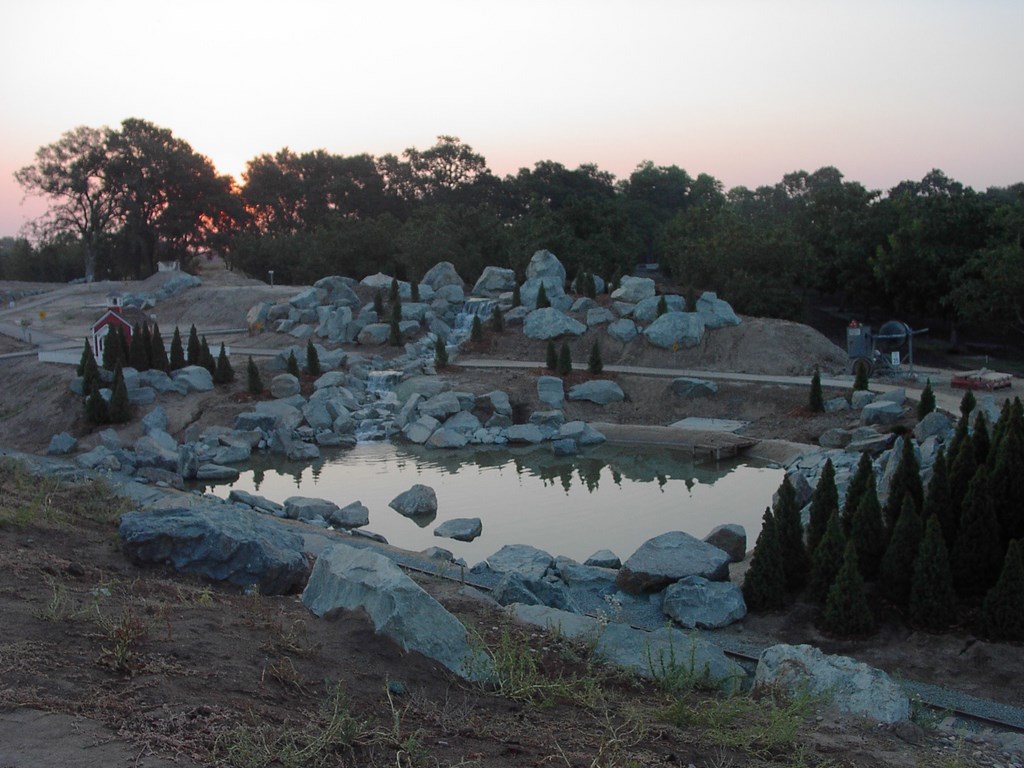 Wanting to avoid these difficulties and working even in our first project with a budget that allowed us to build bulletproof structures, we developed our own method of liner-and-concrete construction and applied it for the first time with these two waterfalls.

We started out with an insurance policy, laying down sheets of stainless steel mesh to protect the deepest layers of the structure from gophers, squirrels and other critters that might be inclined to nibble on the underside of the liners. Atop that, we added a layer of sand, then a layer of felt sheeting material and then another layer of sand over which we installed the liner.

The liner we used is a proprietary material 65-mils thick and ribbed for extra strength. Now we added another layer of sand, more felt, then another layer of sand. Next came a cage of rebar installed 12 inches on center along with a 6:6:10 steel mesh, with stucco mesh along the edges. This we covered with six inches of waterproof concrete textured with rock stamps and then carefully stained with six different acid colors. On this sturdy sub-base, we placed our boulders and smaller rock materials.

We went to such great lengths to ensure that the liner would be protected even where it was supporting the heaviest of the boulders we might use. We won’t be around in 300 years to see if this system actually lasts, but our sense is that it stands a good chance of being around at least that long.

In preparation for this work, we had to do extensive grading and, for both waterfalls, built up the slopes to create the required vertical transitions. In the case of the Moss Rock Waterfall, we built things up over an existing train tunnel.

As one might expect, the circulation systems for these two waterfalls involve large pumps and plumbing of the sort you’d find with big commercial installations. In this case, we started with sub-grade concrete vaults measuring ten feet wide, ten feet long and nine feet deep – one for each waterfall.

Each system is powered by a pair of ten-horsepower submersible pumps. Supplied by ITT Flyght (Trumbull, Conn.), these monsters run on a 480-volt, three-phase power service we installed in a utility loop that encircles the area (with junction boxes every hundred feet). 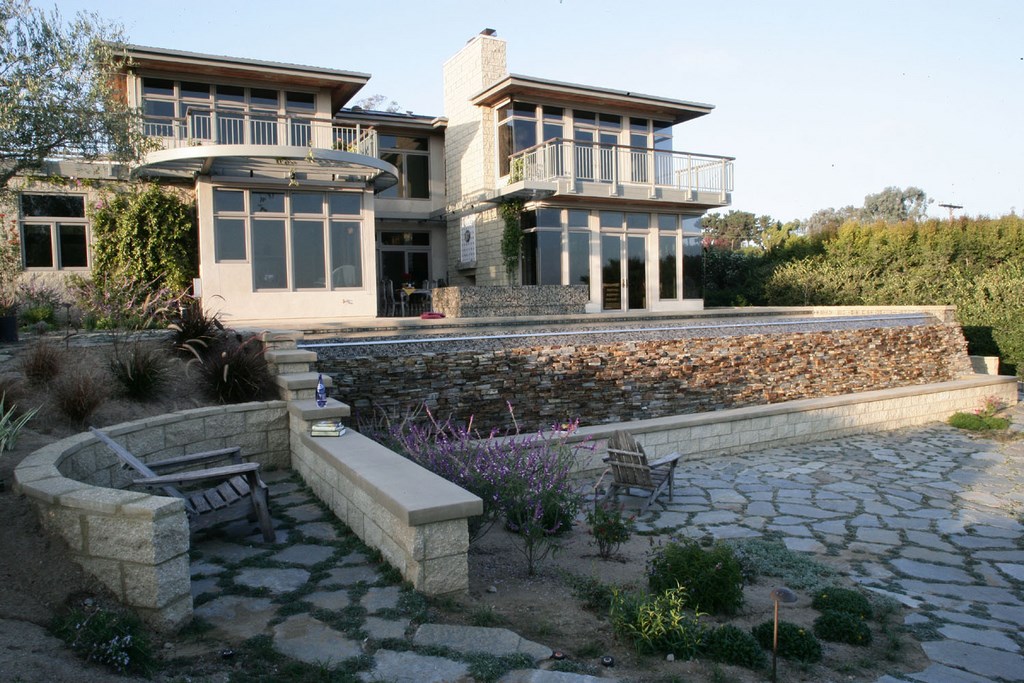 The headwaters are concealed within rock structures, giving both systems the impression that the water flowing into the falls comes from some remote, unseen source.

There are no filters on these systems: Water quality is maintained by the action of the waterfalls and supplemented by four aerators placed in the lake’s bottom. The lake itself is stocked with bass, so regular chemical treatment was out of the question. (We have had to treat the water on a couple of occasions, however, to take care of minor summertime algae blooms.)

The lighting system is also extensive. We worked exclusively with low-voltage fixtures and control systems provided by Nightscaping (Redlands, Calif.) and deployed an array of up-lighting, down-lighting and moonlighting effects. The overall design includes literally hundreds of lighted features, and we’re grateful for the technical support we received from the manufacturer’s systems-design staff.

When everything’s all lit up, the waterfalls and surrounding landscaping take on a dramatic character – a wonderful spectacle seen from key viewing areas around the property.

Ultimately, great landscape and watershape projects are the result of carefully integrated sets of technical and aesthetic details. On that level, success is all about clearing both bars in ways that make all elements work together in harmony and create a dramatic composition that fits a site, a home and the clients’ dreams.

In the case of this particular success, all I can say is, what a place to start!

Bill Goddard is owner and founder of GCS, a design/build firm based in Woodbridge, Calif. Founded in 2000, the small, full-service company tackles just one or two residential landscaping/watershaping projects at a time, always for ultra-high-end clients. Before starting his company, Goddard spent 25 years as a sales and marketing executive in the printing-technology industry. He had earned his general contractor’s license in 1983, always anticipating a move into the construction industry; he concedes that he did not figure it would take him nearly 18 years to make the transition. Before pursuing his disparate careers, he studied business administration at California State University at Humboldt.