Built to function and compete in an era when marketing matters for healthcare facilities, the McKay-Dee Hospital Center was designed to create a soothing, supportive, healing environment for patients, visitors and staff – so much so that the center looks more like a resort hotel than a medical institution.

The architecture is open and soaring, offering sweeping views from interior spaces set up for comfort and restfulness. Designed by Jeff Stouffler of HKS Architects of Dallas, the structure is organized around a four-story atrium that runs the length of the building, offering clear lines of sight not only to distant mountain and valley views, but also to nearby landscapes graced with winding paths and beautiful watershapes.

The opening of the 690,000-square-foot facility on March 25, 2002, was accompanied by great public fanfare. As people in the community have embraced and begun to seek care there, it’s been a point of pride for us at Bratt Water Features to know that the beautiful curving lake that wraps around the exterior of the gleaming building is one of the things people see, enjoy and appreciate the most.

Our job was to build all of watershapes, including seven small fountains and the big lake system, based on designs prepared by Waterscape Consultants of Houston and by landscape architect James Burnett, also of Houston. As bidders on the installation contract in 1999, we had the advantage of being a local firm – but we also brought extensive experience with large-scale public waterfeatures to the table.

And this project was big. As far as anyone on the design team knows, this is the largest waterfeature/fountain complex ever built in the state of Utah. We refer affectionately to the feature as “Bullwinkle” because, when seen from overhead, its oddly symmetrical free-form shape casts a silhouette resembling the cartoon moose’s head and antlers.

The antlers wrap around the footprint of the west end of the building, with the nose stretching away from hospital to create a broad lake with a towering geyser at the far end. The 175-foot-wide, 500-foot-long watershape features a 170-foot-long waterfall between the antlers and the crown of Bullwinkle’s head that faces an outdoor pavilion/eating area served by an indoor café.

The water falls four feet into a teardrop-shaped lower pond that serves as a catch basin – and which turned out to be critical to system operation as well as aesthetics, as I’ll explain below.

After winning the bid, we came on site and had to deal with a muck pond fed by a natural spring that happened to emerge just where the lake was to be installed. Helpfully, the project’s excavation contractor had set up an extensive system of French drains around the perimeter of the lake site. We were able to use this as part of our dewatering system, but we soon found that we needed to take greater measures to build as planned. 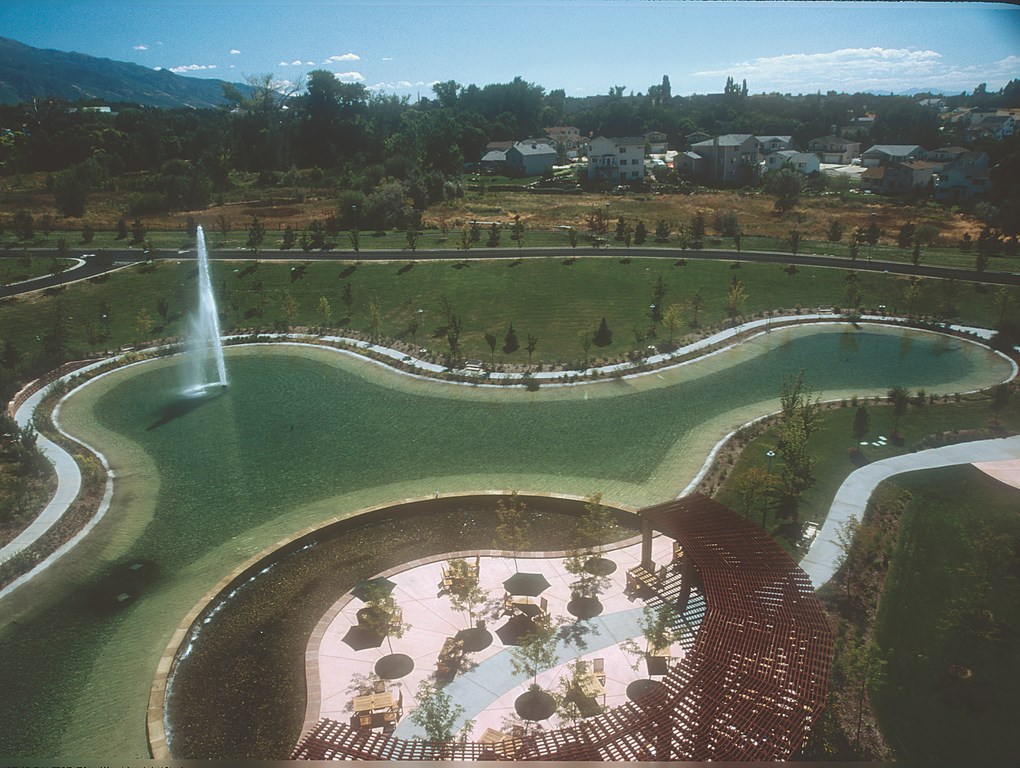 Indeed, it was a constant struggle in the early going. Our excavator often bogged down in mud, for example, and it took us weeks instead of days to shape and install the vessel. Ultimately, we handled the flow by setting up three ponding locations near points where the spring poured into our basin. We set up “trash” pumps at these spots that ran constantly to keep the water level down.

Once the dewatering system was fully functional, we completed the excavation and began the next stage of construction by laying out the extensive network of intake and return lines.

There are eight intake areas in the watershape, each made of perforated six-inch pipe and set in the catch basin downstream from the waterfall. The intakes feed into two 12-inch lines that run about 175 feet to the pump vault. The pump array consists of three 10-horsepower pumps – one driving the geyser and the other two returning water to the large upper lakes.

The water is returned via bottom-mounted, anti-vortex assemblies made by Roman Fountains of Albuquerque, N.M. The hospital team was adamant that they did not want to see any swirling or foam on the water’s surface above the returns. 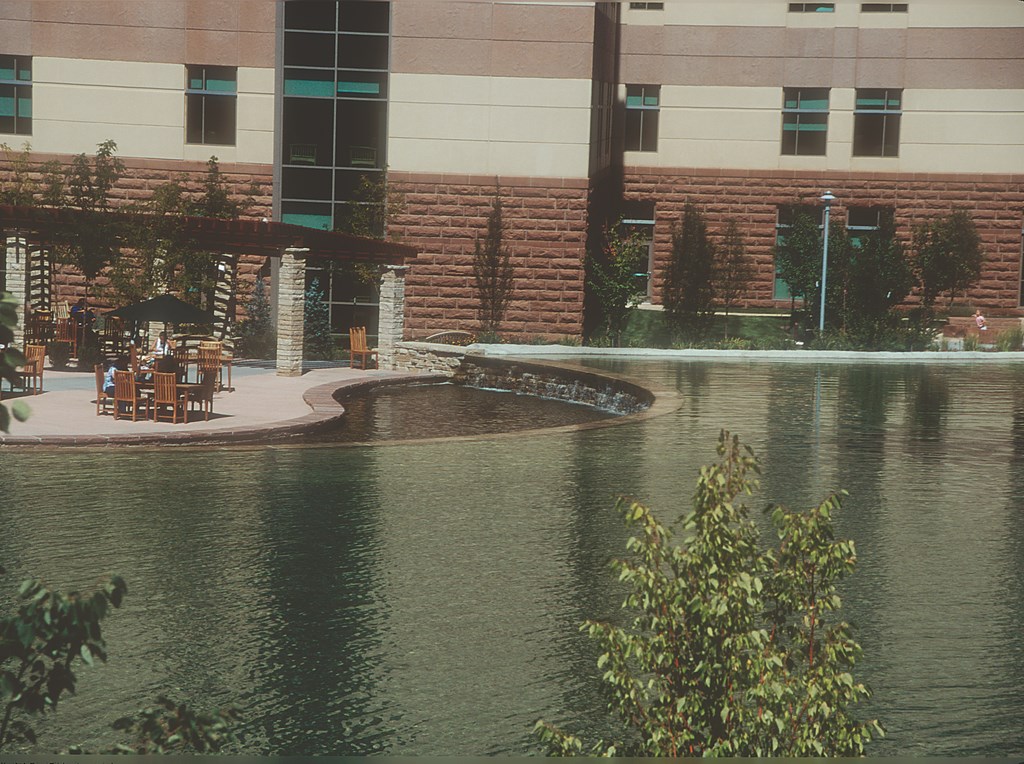 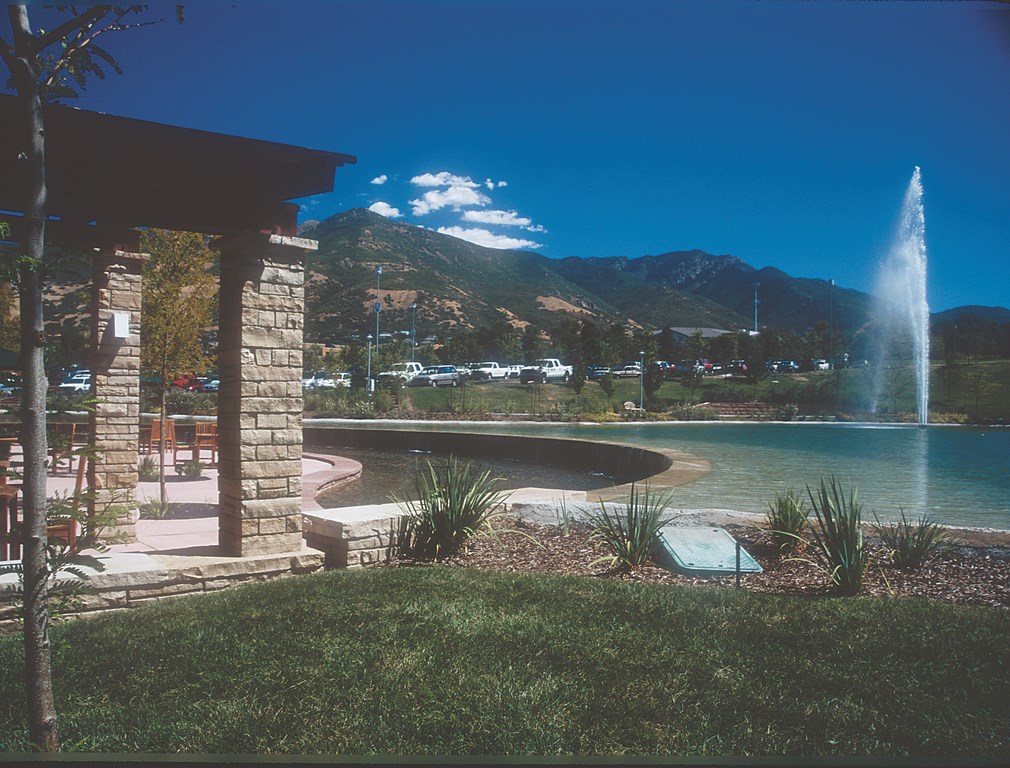 With all the plumbing laid, we were ready to place the liner system – a “sandwich” consisting of a geo-textile underlayment topped by a 45-mil rubber EPDM liner that was in turn topped by another geo-textile layer. This entire surface area was then covered by gravel and cobble.

The pipes were positioned beneath the gravel and cobble, which effectively forms big biological filters above the intake points. In our experience, this is the best way to maintain water quality in big lakes: Whenever we can set it up this way, we go for it – and the results are consistently awesome, with water so clear you can see right through to the cobbles. 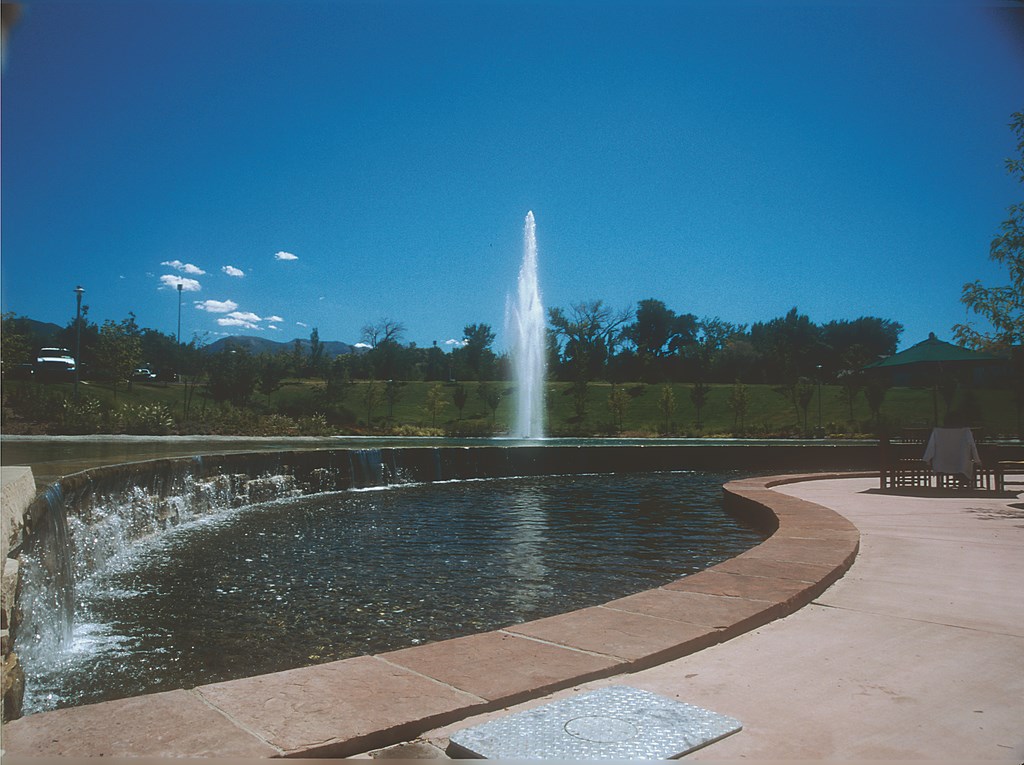 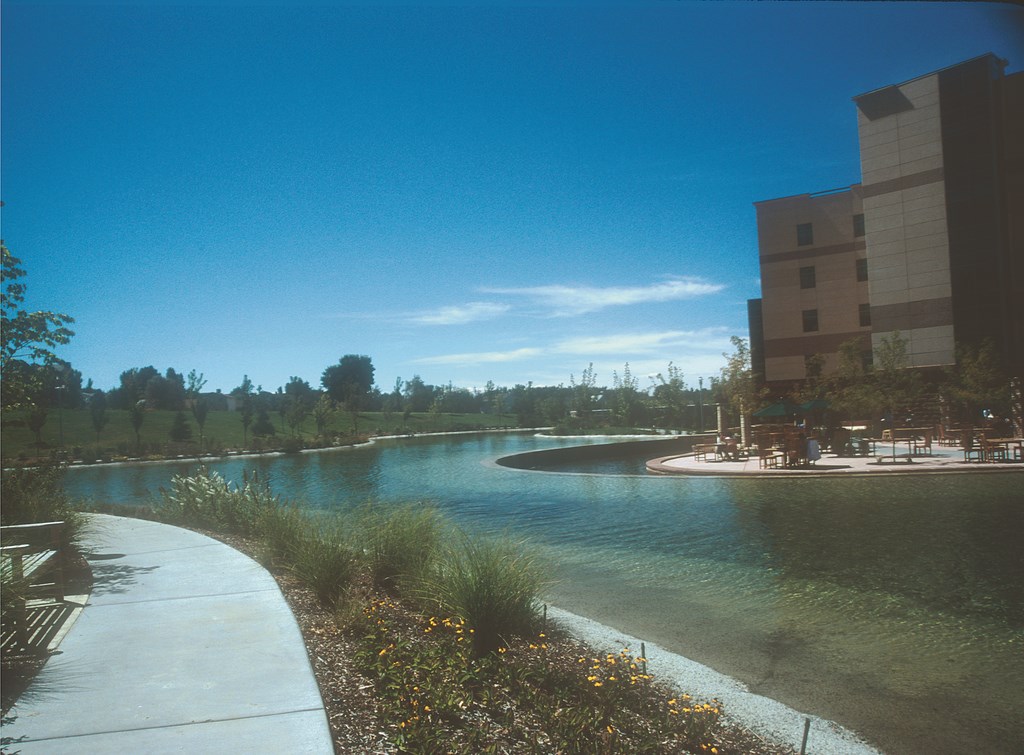 We did things this way because we knew right from the start that crystalline water was of paramount importance to the hospital team. They wanted to make the paths around the grounds accessible to wheelchair-bound patients and those able to walk on their own, and of course they wanted everything those patients and their guests would see to be pristine, healthful and encouraging. Given a high projected volume of traffic that would include patients, visitors and staff, there was simply no room for compromise.

With these systems established, we moved on to deal with the project’s many aesthetic details.

The most dramatic of these details is the long weir. Approximately 2,000 gallons per minute flow over this edge, creating a thin sheet fall.

The weir itself is an engineered, poured-in-place reinforced-concrete wall that’s 18 inches thick with a large concrete footer – dead level from end to end. A local structural engineer prepared this detail, which also needs to retain the considerable weight of the water in the upper lake.

Finished with the same Utah stone veneer used throughout the hospital structure and hardscapes, the structure is lit by 65 underwater brass lighting fixtures, 200 watts apiece, that line the base of the falls and light the whole expanse spectacularly at night.

The falls reward observers who take it in from multiple angles and different perspectives. From a large part of the path that wraps around the lake, for instance, the water flows over the edge in a vanishing-edge effect – a classic water-on-water view where the lower pond comes into play. When you’re out in the deck area next to the waterfall, the view of the sheeting water is quite dramatic in a different way – but all in keeping with the thought of maximizing a sense of soothing and healing rather than stirring up excitement or much noise.

The bottom pool is just 14 inches deep and a fraction of the size of the upper lake, which makes this catch basin the functional heart of the system. When the pumps are shut down, a considerable amount of water from the upper pool flows into the lower vessel, which has just an eighth of the surface area of the upper pool. This meant that we had to come up with a mechanical solution to accommodate the rare occasions when the system’s pumps would not be operating.

To do so, we ran an 18-inch pipe to a specially designed drain – 12 feet long, two feet high and three feet wide – that we installed in the lower pond. This upright rectangular structure has overflow slots that can be adjusted to set the level of the pond. In effect, this drain works like a stilling well, allowing water to gather as it is pumped out – in this case to waste via the site’s main storm-drain system.

The overall water level is controlled using a similar (but much smaller) stilling well equipped with an electronic sensor wired to a relay that controls a valve assembly hooked into the city water system. (At first, the hospital had us plumb the make-up system to a reservoir adjacent to a nearby dam. Almost immediately, however, we experienced problems with seeds and organics that came in with the water, so the system was re-plumbed into the public water utility.)

As long as the system is running, the only thing requiring control is the level of the bottom pool – basically to accommodate losses due to evaporation with fresh make-up water.

On the upper lake’s far end (relative to the hospital), there’s a spray effect that sends an aerated column of water 65 feet into the air, creating a falling curtain of water that lends an inspiring sense of majesty to the space.

This feature is fed by a six-inch PVC line that flows to six, two-inch fountain nozzles supplied by Roman Fountains. The water moves at 500 gpm, running from 7 a.m. until 10 p.m – except at times when the wind exceeds five miles per hour. Five 500-watt submersible lights make it glow beautifully at night.

There are also three centrally located aerators, each bottom-mounted and driven by a blower located in the pump vault. They run during the hours – from 10 p.m. until 7 a.m. – when the fountain is off. 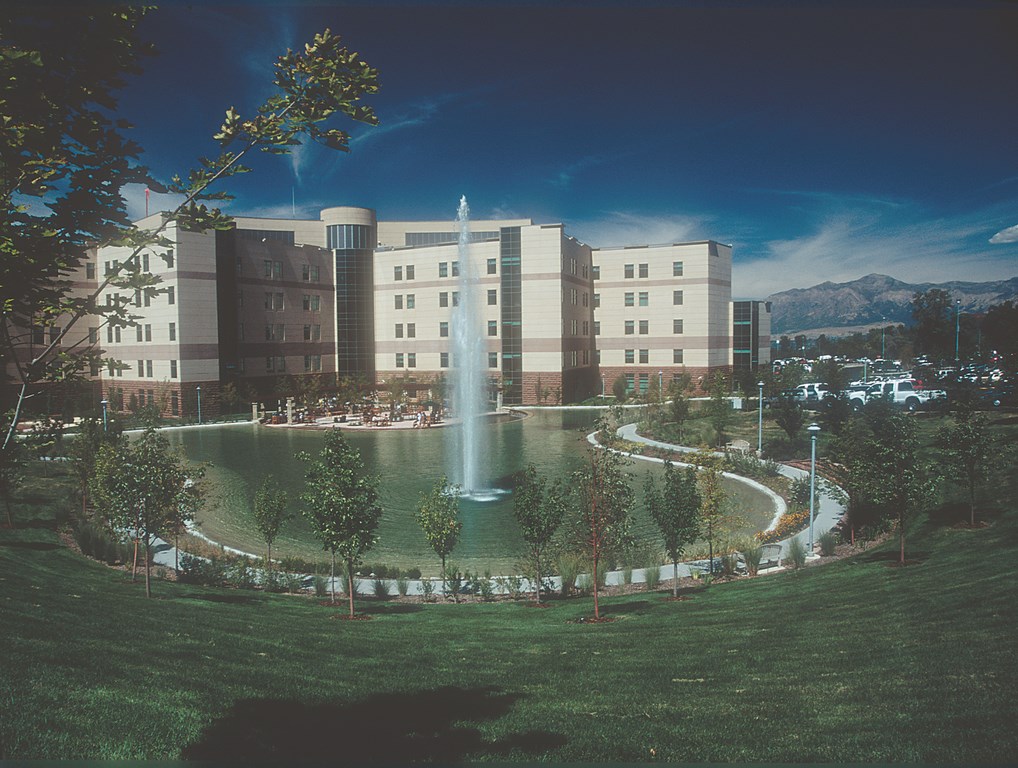 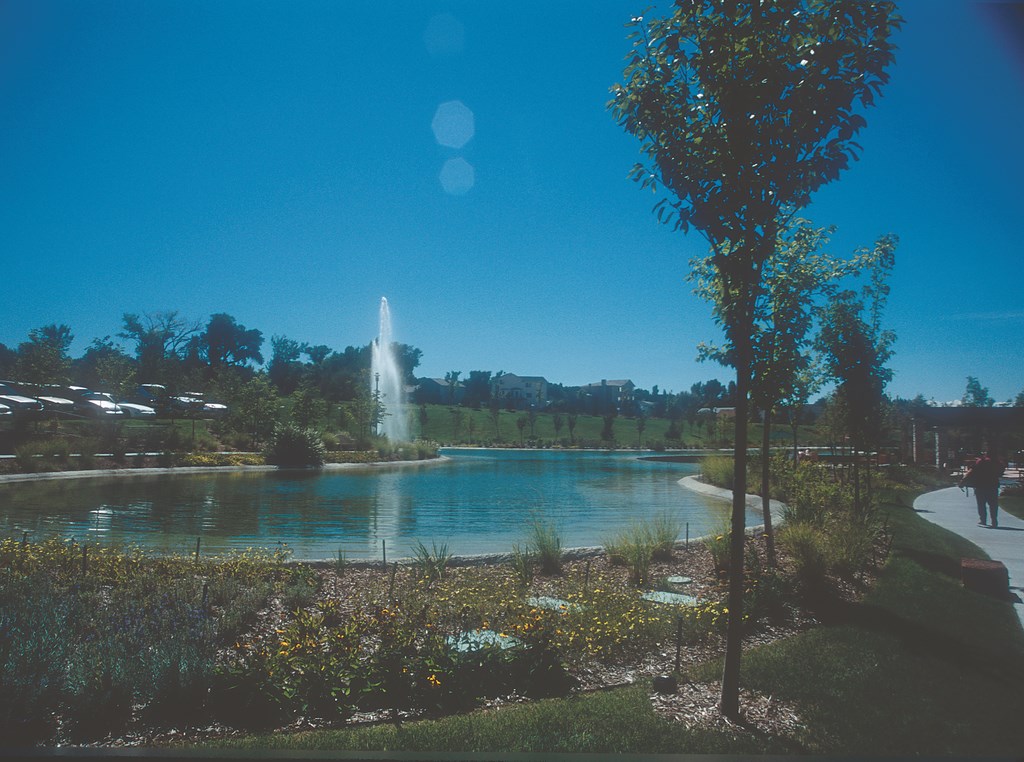 The pump vault is buried beneath a landscaped area close to the water. This 15-by-12-foot space sits beneath a collar that yields a generous eight-foot interior ceiling height. The vault houses the pumps, the aeration system and the water make-up system and has two vents – one equipped with a thermostat and an exhaust fan. There’s also a sump-pump assembly that will come on automatically if the vault starts to flood for any reason.

One of the fascinating aspects of this project is its reflection of a trend in hospital- and healthcare-facility design toward borrowing ideas from the hospitality industry. As the managed-care industry has become more competitive, beautifying facilities has become a means of drawing patients as well as health-care professionals. This made our work on this big waterfeature doubly meaningful by combining high quality with high purpose. And it seems to have worked on both levels ever since the facility opened its doors in 2002.

All it takes is watching a patient walking or being wheeled around the water and enjoying the sights and the sounds to muster a sense of satisfaction that speaks to the fact that, when used the right way, water really is good medicine.

Derk Hebdon is owner and president of Salt Lake City-based Bratt Water Features, a spin-off of Bratt, Inc., Utah’s largest landscape design and construction firm. A 1991 graduate of Arizona State University, Hebdon started in the landscaping design/construction trades in 1992, when he purchased a landscape maintenance and construction firm in Tampa, Fla. In 1995, he moved into the design and construction of ponds and streams – which quickly became a primary focus for the company. He sold that business in 1999 before moving to Utah to become manager for Bratt’s waterfeatures division. That business unit was spun off in April 2003 and now focuses on designing quality waterfeatures for residential and commercial clients. Hebdon is a certified landscape professional (CLP) through the Associated Landscape Contractors of America.