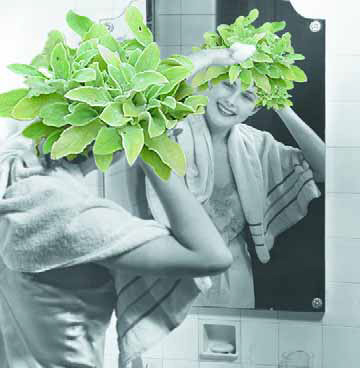 The same attitude about light comes up when we speak of landscapes. We’re always talking about “brightening up” a dark corner, for example, or “adding light” at one point or another. Whether the absence of light makes us uncomfortable or its presence is simply a design convention, we seem to have a need to incorporate light in what we do in one form or another.

I bring this up because several of my recent columns have discussed ways to bring light into or brighten up an otherwise shady or dark area of a garden. So far, however, I’ve yet to mention a brightening role for plants with grey foliage, largely because I have been focused on ways to bring light touches to shady areas and grey-leafed foliage tends instead to be sun loving.

Now we’ll step into the sun, talk about a number of the lighter-leafed plants we can use and explore the special opportunities they offer watershapers to pick up grey or silver tones from tile or other hardscape features and further integrate a watershape with its landscaping.

WAYS TO USE GREY

Of all the gardens I’ve designed during the past 15 years, I recall less than a handful in which I didn’t use some grey- or silver-foliage plants. They add a variation to the design without being “in your face” in the way a yellow-leafed or flowering plant might be.

Grey tends to be a “warmer” color by comparison to yellow, which is generally considered to be “hot” – that is, a color that really stands out in a landscape. Yellow used sparingly can be soothing, but if you use enough of it, it predominates. Grey doesn’t stand out the way “hot” colors do.
Used as a highlight, grey foliage adds light, blends in well with other plants and draws attention to an area without overwhelming the senses. Grey-leafed plants are therefore good, considerate and caring neighbors to other plants. This effect is, of course, rooted in color theory and the ways our minds balance colors, but that’s a much larger topic than can be covered here.

This effect is why using Stachys byzantina (Lamb’s Ear), for example, next to Heuchera ‘Palace Purple’ (Purple-Leafed Coral Bells) will draw attention to that area of a design without causing either plant to be the focal point. By itself, the Heuchera might get lost, but when set off by the Lamb’s Ear, there’s much less of a chance it’ll either get lost among darker-leafed plants or blend in with the soil.

I particularly appreciate the way grey- or silver-leafed plants can be used to add a sense of depth and dimension to a design. Too much green can flatten a landscape’s appearance. Bronze- or burgundy-leafed plants added to that design will recede into a newly defined background, while grey foliage will step slightly toward the foreground.

Working with a sense of depth within a design creates a lot more interest and dimension than would be created even by varying such elements as texture or plant size. Basically, what we are doing is creating a highly effective optical illusion.

Also, I prefer placing grey-foliage plants next to plants of other foliage colors (such as green, blue or burgundy) rather than next to other grey plants. A grouping of grey plants can give a very flat appearance – even more so than a completely green palette. I do, however, favor massing the same grey plant in a design, using, for example, five one-gallon Lamb’s Ears in a spot surrounded by green or other colored foliage.

Grey foliage plants come in all shapes and sizes. The ones I’ve included are predominantly perennials – and are those with which I’ve had the most success.

* Achillea (Yarrow). There are many varieties of this hardy perennial. Aside from the addition of its grey foliage to a design, the advantage of this plant is that it comes with flowers of many different colors. You have lots of choices and can tailor flower color to the situation: I’ve used everything from the whites and yellows through to the reds. 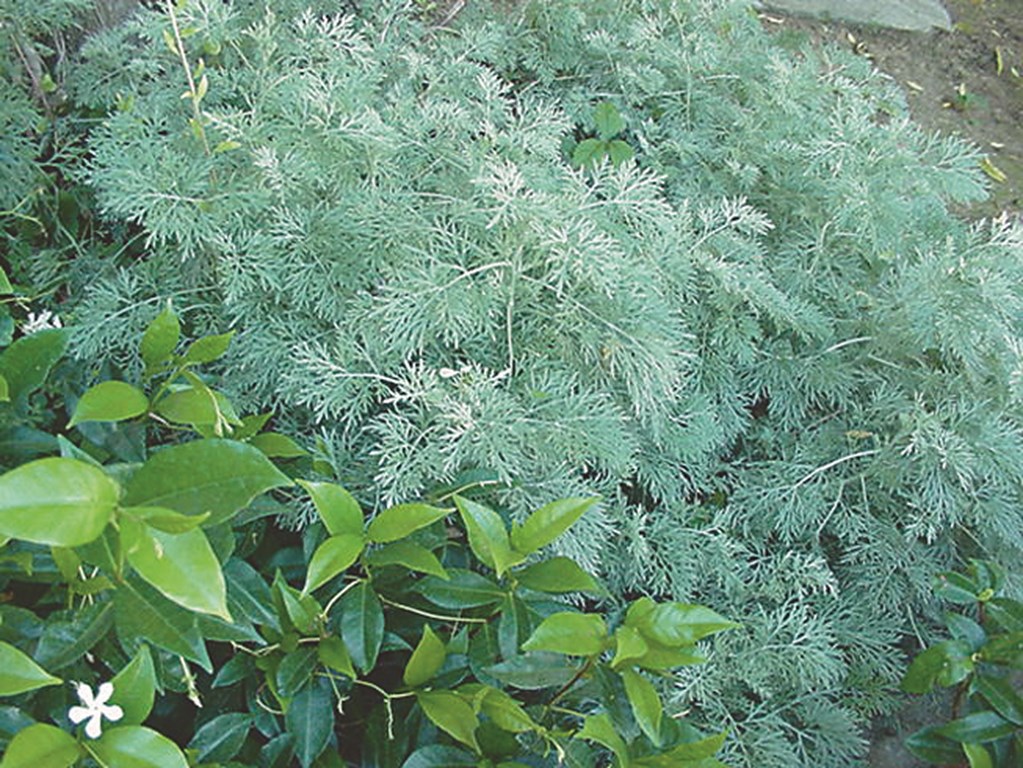 * Artemesia. These come in many shapes and sizes. The most common look, however, is grey foliage with a few insignificant flowers (if any at all) – at least that’s been true in my experience. If you’re looking to add grey without the interference of flowers, this is your plant. 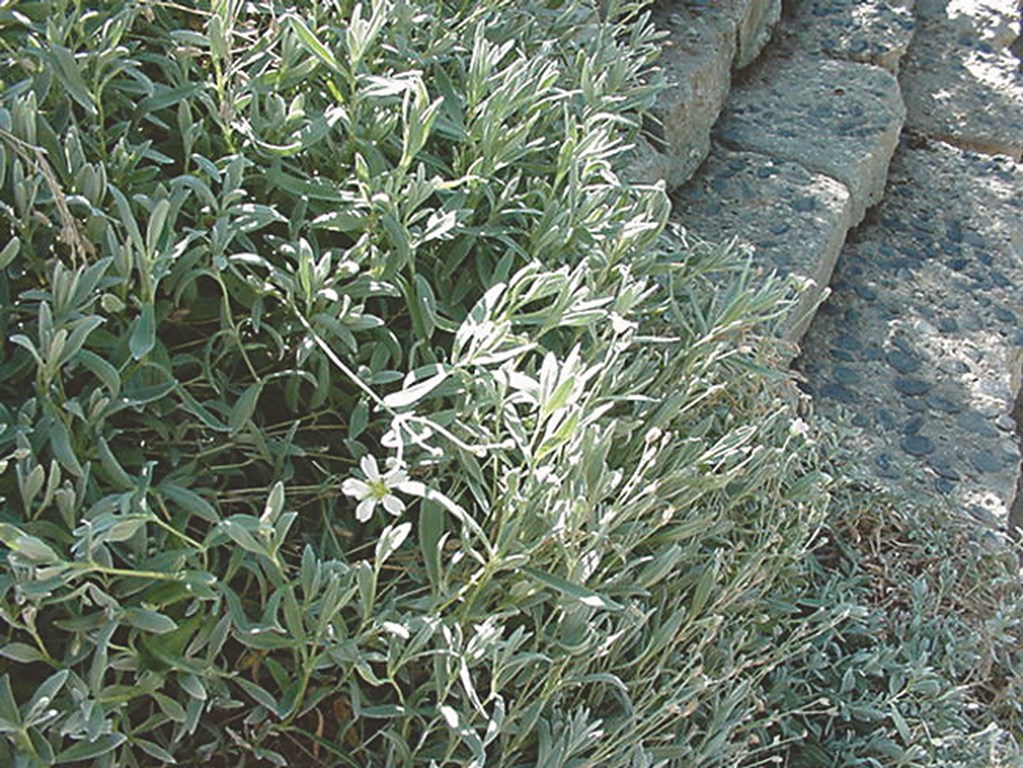 * Cerastium tomentosum (Snow-in-Summer). I love this ground cover. Among the many purposes it serves, it makes a great, tiny cut flower for small arrangements or accents. At less than nine inches in height, it stays quite low and spreads beautifully over walls, slopes and hanging baskets. Cerastium prefers hot temperatures and full sun, but it can be adapted to partial shade if it stays hot enough.

* Convolvulus cneorum. This is a simple, mounding, elongated-leaf shrub that can grow to four feet, but which I’ve usually seen between one and two feet because they tend to look better when cut back (they tend to get rangy if not pruned annually). Its white, morning-glory-like flowers of about one or two inches across add a little more light to its effect, and it looks great when placed toward the front of a border among green- or burgundy-leafed plants. It also looks great next to plants with blue foliage, as do many of these other grey-foliage selections.

* Echeveria. This large category of succulents is great in xeriscapes or dry-climate designs. Placed among rock gardens or surrounded by pebbles, it stands out perfectly as a specimen or when massed.

* Eucalyptus. Most people in the watershaping business would have a tendency to run from these trees, which can be murder on white plaster if a leaf settles undisturbed on the bottom for any length of time and leaves a permanent stain. (I can still hear my mother swearing at the Eucalyptus trees in our neighbor’s backyard and the pain they made of maintaining our pool.) These trees create a statuesque, weeping backdrop for many design styles, are great as windbreaks and, in a large setting, look spectacular in groupings. They also come in many varieties, large and small. But if you go this way near a swimming pool, think either a dark interior finish or a supercharged cleaning system!

* Helichrysum petiolare (Licorice Plant). This is another great addition to the middle of any border. It’s a medium-size perennial that looks best if pruned back annually to remove deadwood. It can grow to three or four feet in height and width and definitely stands out more than the average grey-foliage plant. I use it in settings where I want to add more dimension. 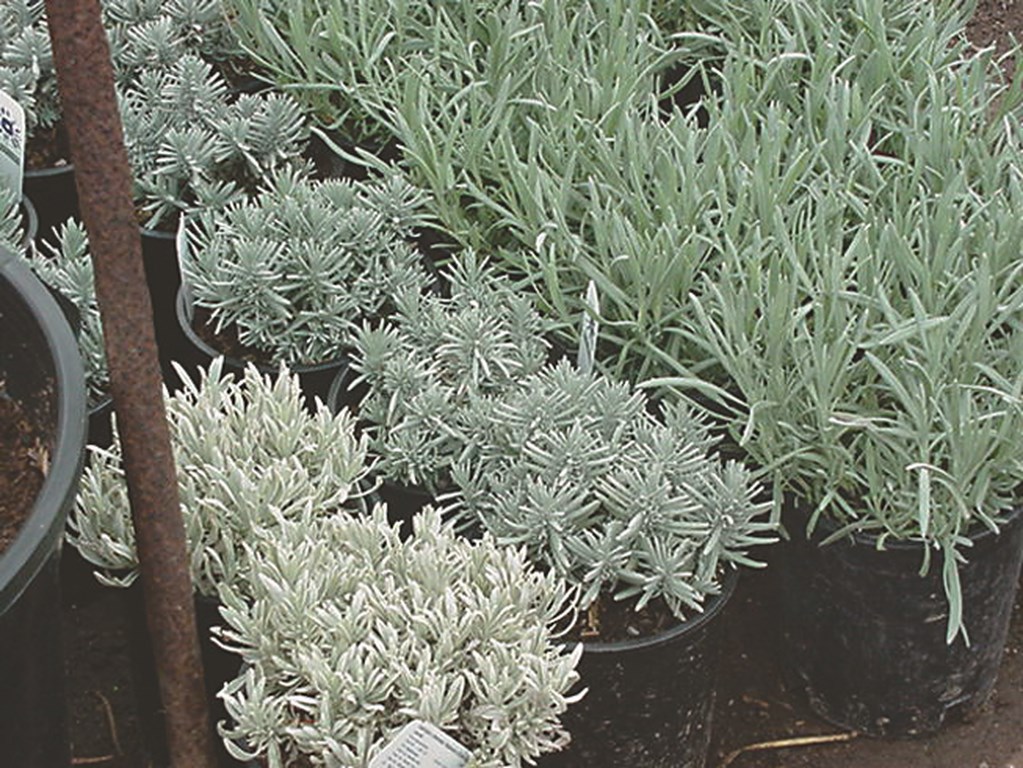 * Lavender. I can’t say enough about this genus, which is probably my favorite in the plant kingdom. The lavender fields of Provence are among the most spectacular sights I’ve been privileged to view: Seeing those fields of grey foliage blanketed by purple flowers and backed up by a vast field of yellow sunflowers is something you have to see to believe. (I use so many different varieties of lavender in my designs that I’ll treat them all together in my next column; suffice it for now to say that they are varied, versatile and can be used in many different ways.)

* Leucophyllum frutescens (Texas Ranger). This is a plant I’ve recently begun using more often. It takes the heat quite well and works perfectly in the background as a large filler shrub. It’s also great at lightening up the darkness created by use of too many darker filler shrubs at the back of a border, particularly in full-sun situations. 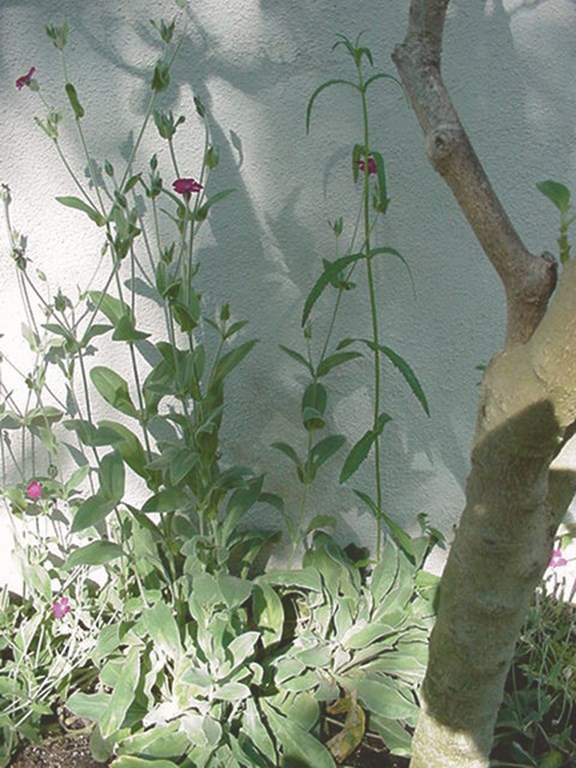 * Lychnis coronaria (Rose Campion). I planted this beautiful perennial in my own garden only to find that I needed to pay more attention to it in a hurry. It self-sows, dropping seeds every season to create new plants, and it can become a garden pest. But it works well in a large area that needs to be well covered by a natural or wild planting, and its magenta flowers, though small, are quite beautiful. Just plant it sparingly and advise your clients to stay ahead of it – unless they want it to take over, that is.

* Santolina chamaecyparissus (Lavender Cotton). I haven’t used this quite as much recently, but find that it works well when you need something to lighten up the middle of a border. It’s a low, spreading shrub that tends to get woody if not pruned annually, but puts on a grand display of small, button-like yellow flowers throughout the season. Its foliage also has a pleasant aroma when brushed or pinched. 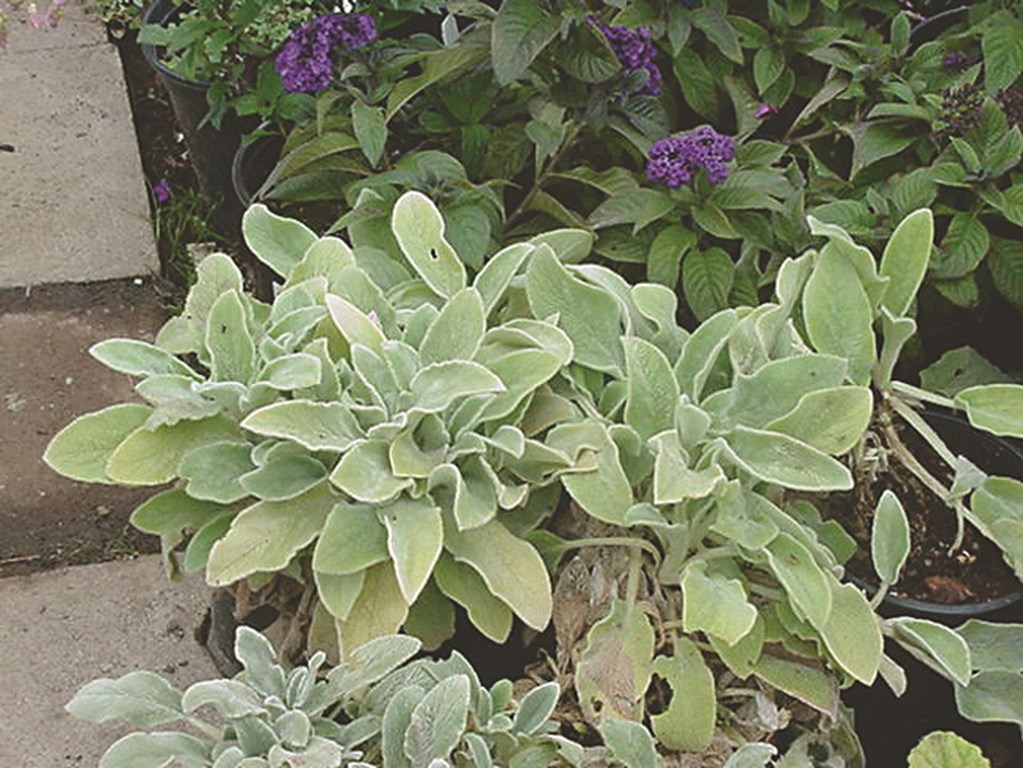 * Stachys byzantina (Lamb’s Ear). I love this plant and use it in many of my designs. Kids and adults all love its soft, fuzzy leaves as well as the softness it adds to the front of any border. It can be used in a variety of designs from contemporary to cottage and is easily kept in check by pulling out dead leaves by hand.

Next: Much more on Lavender and the best ways to use it in conjunction with any watershape or a good leg of lamb.