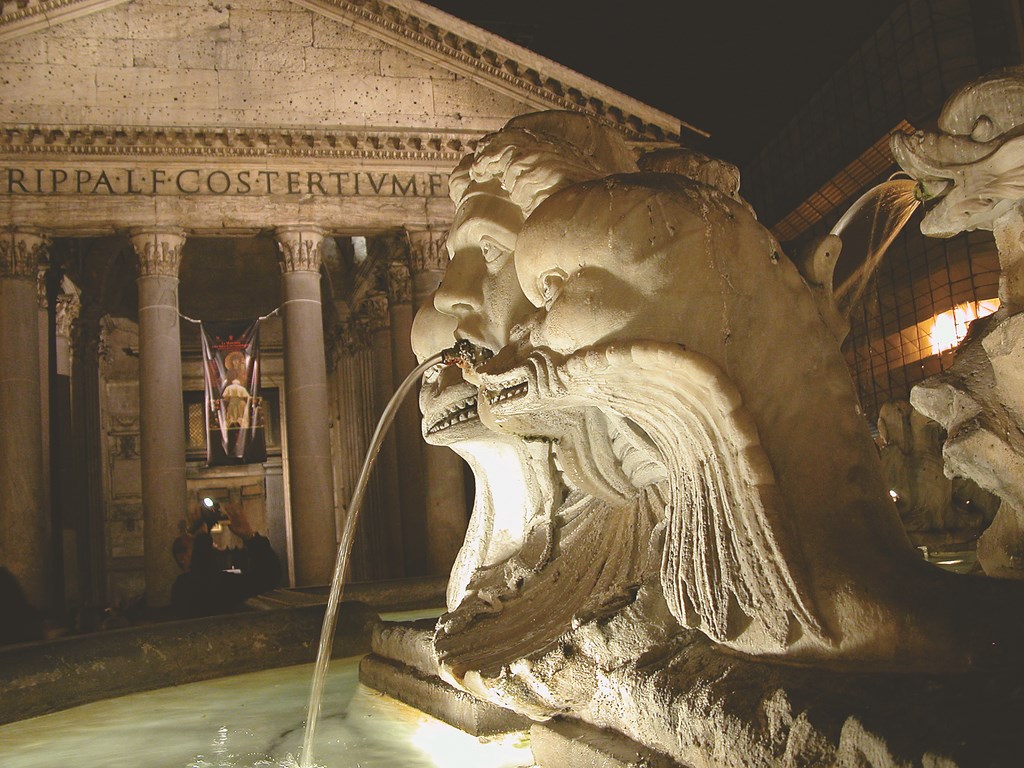 Have you ever wondered why watershapes are at the heart of so many venerable courtyards and plazas?

In a modern context, we might start answering that question by thinking about the natural human fascination and connection with water and then conclude that, like us, those who built the public spaces of ancient Mesopotamia or Athens or Rome simply liked being in the presence of water for emotional and spiritual reasons.

But the truth behind the prominent role of water in these spaces isn’t as romantic as all that. Indeed, there’s a far more practical answer that is easily overlooked by those who seldom need to take more than a few steps to gain access to a reliable supply of water.

The fact is, those ancient fonts and fountains in all those courtyards and plazas were once the primary method of distributing potable water. In truly ancient times, these fonts were wellheads or springs – little more than glorified hose bibs for the use of an estate or located at the center of public plazas where citizens congregated to water their horses and fill their ewers. In the centuries that followed, these spaces became grander and more elaborate, but until fairly recent times they still all served basic roles as much-needed private or public utilities.

In the fall of 2003 and for a couple of reasons, I took a long trip to Italy. My main responsibility was teaching a class on watershaping at a design school in Tuscany. My passion during that time, however, was visiting as many old watershapes as I could with the intention of recording what I saw and using the photographs I took as teaching tools and as a resource for articles such as this one. 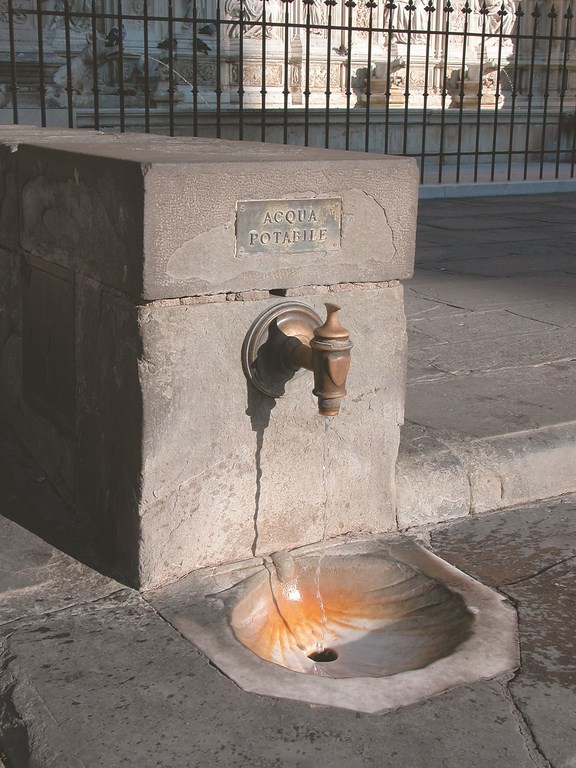 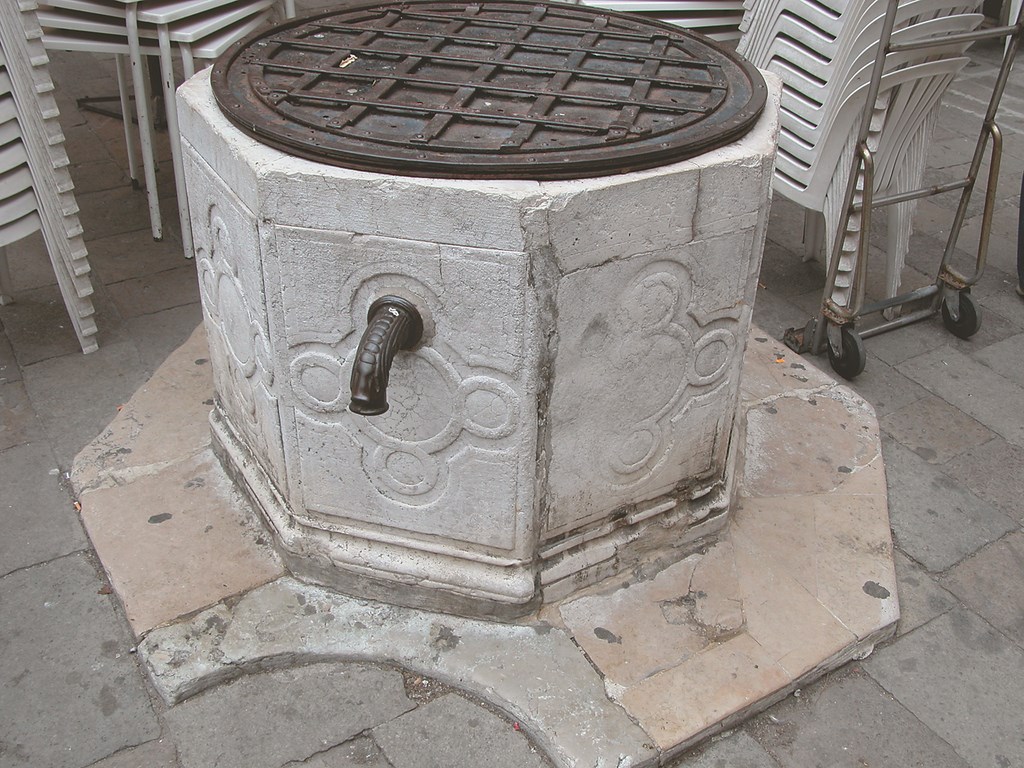 As I traveled from town to town, I found that every major private or public space – universally – had a central core of water in the form of a fountain or wellhead. Back home, these watershapes would have been little more than eye candy in a shopping plaza or a place for kids to get wet. But here they had, for hundreds or even thousands of years, been sources of fresh water – functional utilities for their estates or towns and cultural hubs for the citizenry.

As I looked around, I gained a profound perspective on the evolution of the Western world’s branch of watershaping from its roots in the practical necessity of making water available for mass consumption all the way through to its modern expression as a form of decorative art. By trip’s end, it was easy to see why fountains, ponds and reflecting pools were so central a component in the landscapes of antiquity. 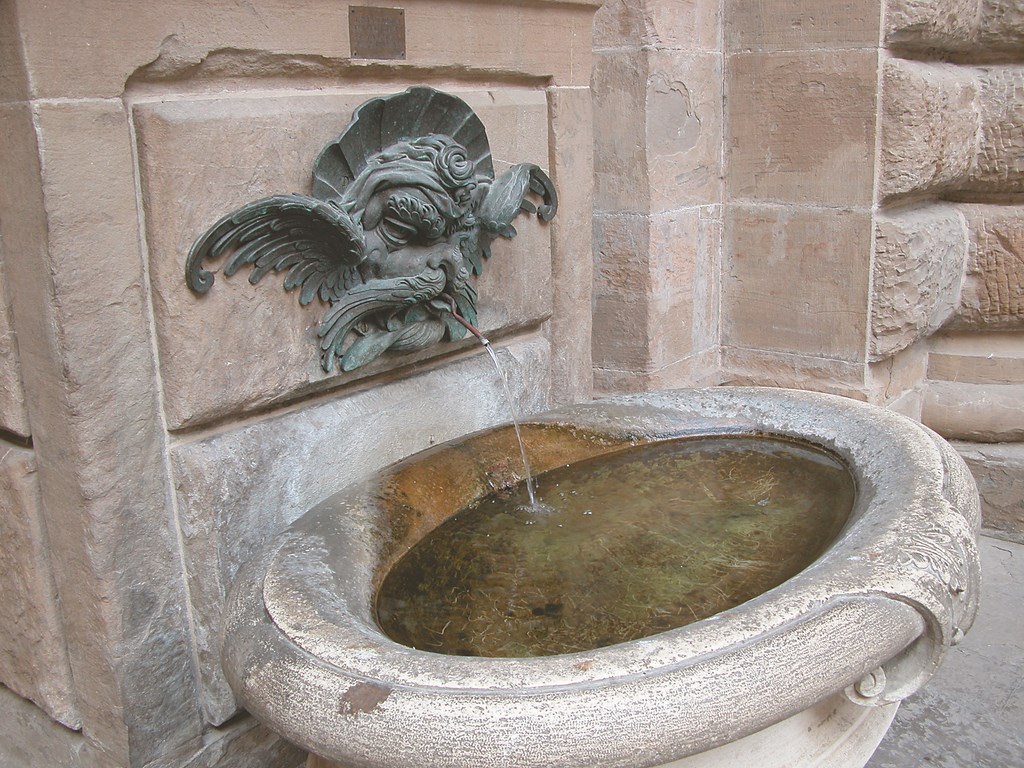 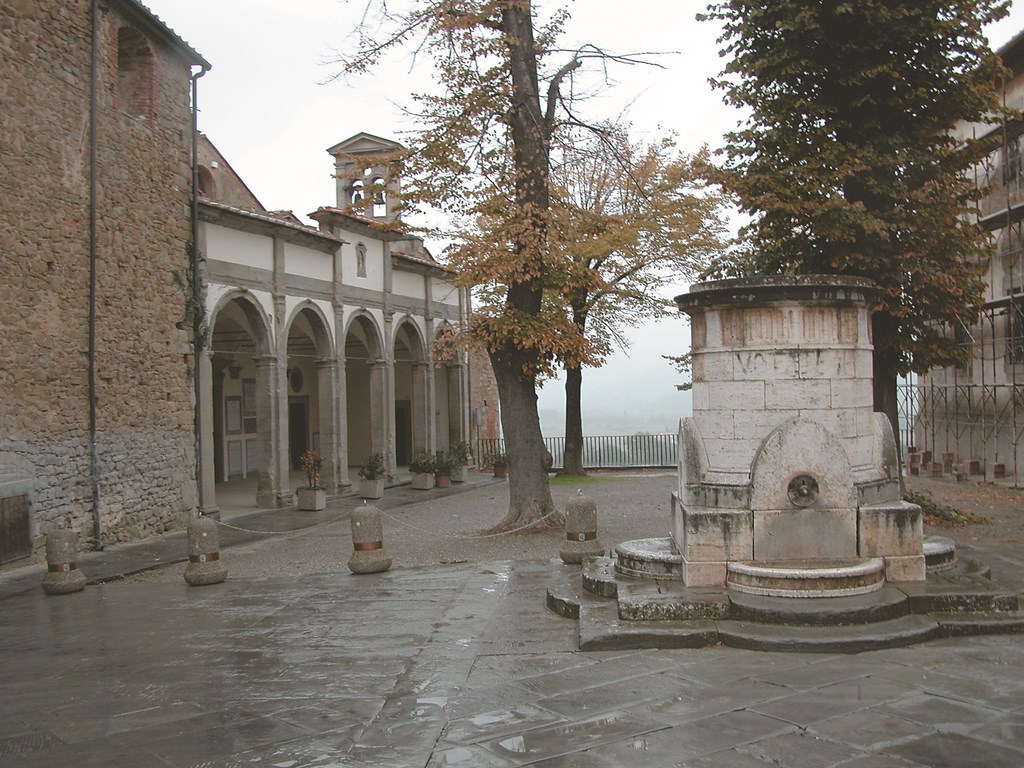 This placing of water at the core of urban design dates to the foundations of our Western civilization. Consider this: Just to function at its zenith, the city of Rome needed to have 9,000,000 cubic meters of water running through its water systems at any given time – far more than the River Tiber could supply, which is why the Romans became so adept at hydraulics and developed an aqueduct system that resulted in placement of all those fonts to deliver water to all those courtyards, public squares and plazas.

As time passed, these spaces took on huge social and even political significance. They were places of commerce, congregation, contemplation and communication – a grander equivalent, in many ways, of water coolers in modern offices. 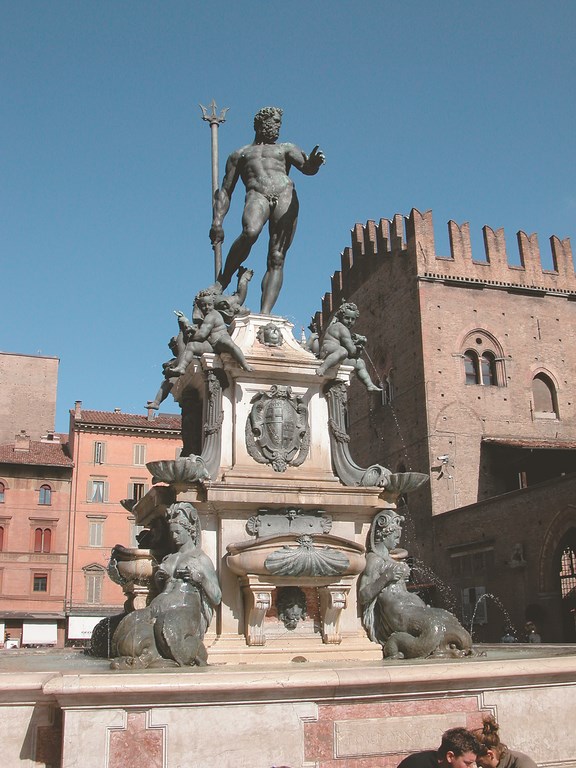 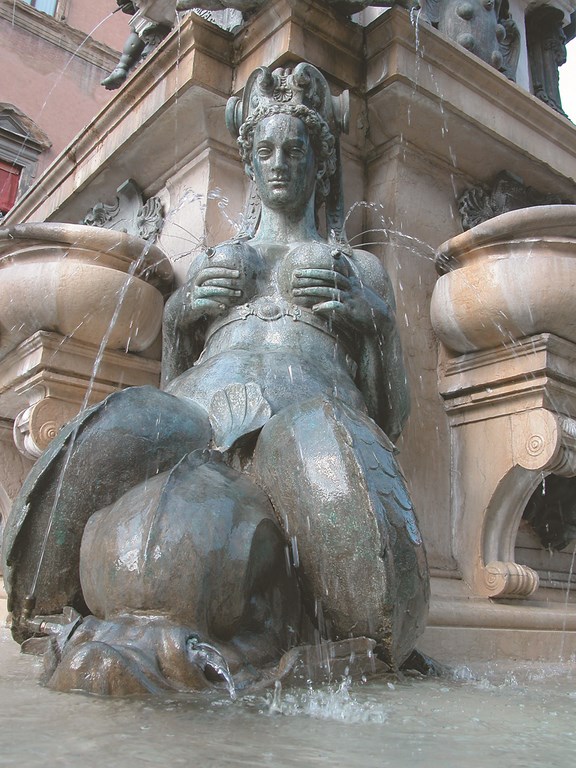 As I traveled, I observed how Roman and Italian artists and architects began to decorate these utilitarian spaces. Almost every one of the hundreds of waterfeatures I cataloged had the primary function of bringing water to the people, but it was easy to see how ornamentation emerged to overtake practicality in a way that influences the work many of us do today.

Whatever the shape of the space, it was water that dictated the order of things. In many instances, in fact, the decorative basins and/or statuary were added hundreds of years after the creation of the original watershape. The Trevi Fountain in Rome is a prime example of this evolution: Originally a simple outlet for the Aqua Virgo aqueduct, it has accreted statuary in stages since the days of the Roman Empire but only achieved its familiarly ornate form as recently as the 18th Century. And you need to reach all the way into the 20th Century before the fountain would lose its primary purpose as a public utility – albeit a magnificent one.

This impulse to “dress up” water sources may fold this discussion back to our natural, modern, emotional answer to the question that kicked off this article. Water is so special a commodity that it is natural to surround it with attractive ornamentation and give symbolic nods to our connection to life’s essence. 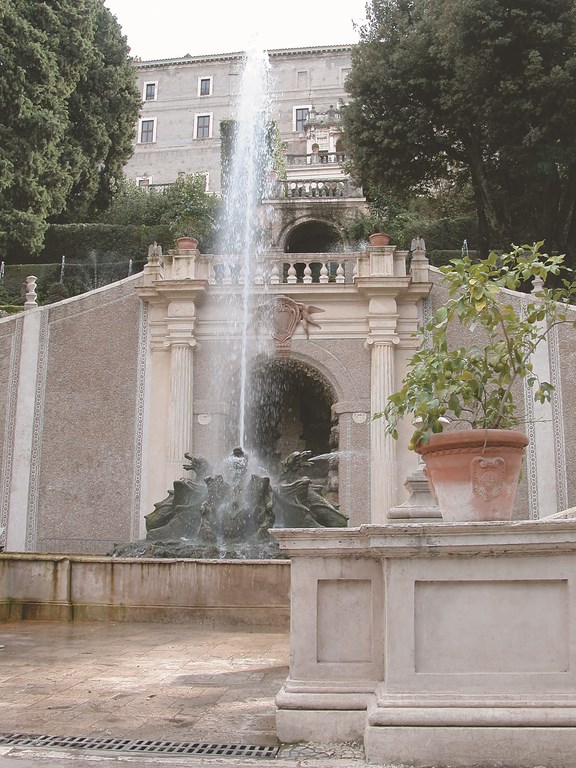 But there’s something else at work that isn’t terribly spiritual: The ability to supply water, to bring it where it was needed (rather than making citizens take their buckets to rivers and streams) is a profound statement of power – not only for the Roman Empire and the builders of the aqueducts but also for the Renaissance princes who fortified their city/states and provided their citizens with the water they needed to survive and thrive.

Those same princes and powerful elites extended the metaphor of power to their private estates, villas and residences, showing anyone who approached that they, on a personal level, had the power to bring water where they wanted it to be rather than live at the unpredictable will or whim of nature.

This all may be difficult for us to comprehend in America, where our oldest cities are just a few centuries old and urban centers grew up with the benefit of long-established water-distribution practices. The watershapes I saw were many times older than that and were mostly still functional (in many cases with a great deal of maintenance and reconstruction).

If you strip away all the ornamentation from Roman and Italian fountains (and there are still plenty of fonts that have a plain, functional appearance, as some of the photographs seen here testify) and reconstruct the history and evolution of those watershapes, it’s plain to see that “function” preceded “form” – and that this concept has been all but lost in today’s urban watershapes.

Once modern infrastructure robbed them of their ancient purpose, watershapes in public spaces morphed into a form of public entertainment as purely decorative marvels. While there’s a well, cistern, spring or basin buried somewhere beneath the vast majority of Roman or Italian fountains in courtyards or plazas, very few American fountains have such practical underpinnings. In modern times, we’ve taken our drinking water and funneled it though a series of hidden pipes, filters and sanitizing units. For the most part, even pool hydraulics are hidden behind walls five feet tall. Rather than celebrate the way these systems work, we have systematically hidden them – and have been heading in that direction for centuries beyond count.

What endures is the water itself. Even seen in purely decorative terms, it still commands attention in exterior spaces, just as a vase of cut flowers will make a strong interior statement at key household intersections. Both reside at the crux of a critical axis, and both limit our ability to walk or reside or intrude on that key intersection. In other words, the water has always been the key – and more important than any individual in the history of design, including all of us.

I’ve often seen it written in the pages of WaterShapes that travel serves a vital role in broadening our perspectives and opening our eyes to alternative worlds of ideas and inspiration. I may even have done so myself on a couple of occasions, but the fact that it’s not an original idea with this article does nothing to diminish the importance of the concept.

I have been fortunate in my formal and extended education and in my affiliation with a range of creative people within the trades to be able to pursue my interest in understanding the origins of watershapes and watershaping. I have seen this as a means of elevating my own performance, and I have come to believe as well that a basic understanding of this long, ancient and honorable heritage is one of the keys to elevating both our art and our industry.