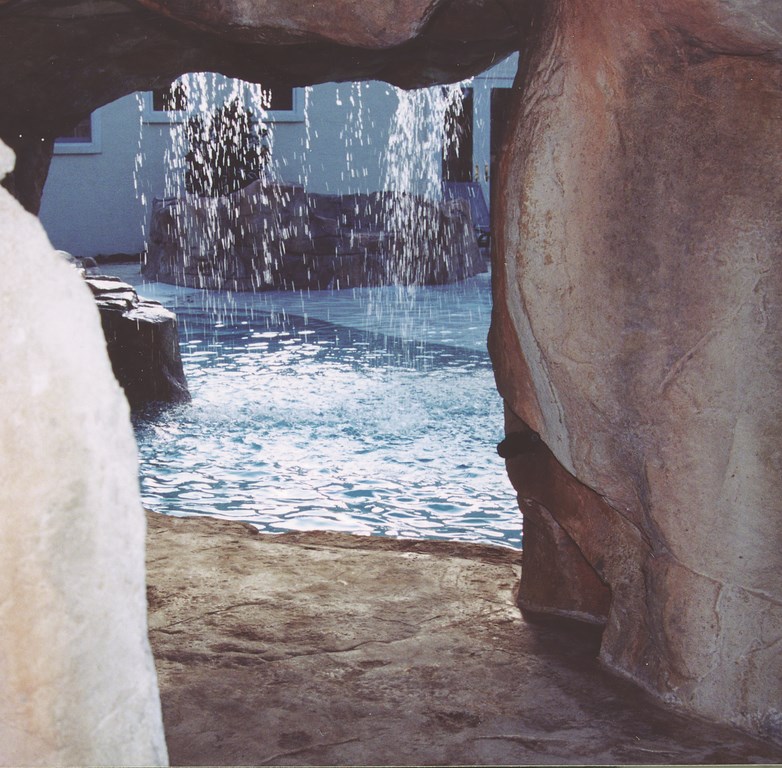 I like a good challenge in my work, and I like to have fun making it happen. This project embodied the best of both experiences.

The project displayed on these pages was built for a wealthy client who lives on a working horse ranch in the rolling green countryside near Ocala, Fla. Our company, Certified Construction, was up to the task. We build hundreds of highly customized watershapes each year for a variety of theme parks, resorts and high-end residences. Most have highly developed “themes,” so we’re accustomed to providing our clients with heavy doses of imagination and creativity.

The basic marching orders on this job were straightforward: The owner wanted a theme park on his property for his kids – and he didn’t really care about the cost.

Fun was the name of the game, and imagination was the currency that got us in the front door. The result is a series of watershapes that combine various elements found in theme parks and resort hotels – but rarely seen in residential projects. We’ve worked on bigger projects with bigger budgets, but at $1.6 million and counting, this is by far the largest private-residence project I’ve ever seen.

To quote the client here, the design needed to have “snap, crackle, pop.” Let’s take a tour of Foxtrotter Ranch and see what it takes to perform at that level of expectation.

The original project called for two primary pool areas, one for kids and one for bigger kids (including the adult variety). The client wanted slides, grottos, interactive water, beach entries, waterfalls, fog machines, lighting, rock structures, rainmakers and bridges, all built with as much creative detail as we could muster.

He told us he wanted us to “blow his mind,” so that’s what we tried to do. Right away, we decided to go with a “Swiss Family Robinson” theme, filling and surrounding the water with structures that suggested life in a jungle treehouse.

The kiddie pool and its various interactive toys start with a 360-degree beach entry. About 50 feet across, the pool gradually slopes to a maximum depth of 18 inches. In the center is a massive treehouse and a handcrafted, 18-foot alligator slide.

The whole affair is set beneath a 60-by-60-foot Plexiglass and aluminum enclosure with a retractable roof: When the sun shines, 16 massive panels slide back to allow the Florida sun to drench the area; when it’s cold, the panels shut out the elements so the kids can still enjoy indoor play.

The central play structure was built in conjunction with ComPac Filtration of Jacksonville, Fla. They designed and assembled the basic aluminum sub-structure and plumbing within the treehouse and were also instrumental in designing the equipment pad.

The structure itself looks like a bamboo hut with adjoining bridges. The uprights are seamed aluminum with a faux-bamboo finish on the outside. The walkways use eucalyptus wood planks that hold up beautifully to water with no protective finish at all. The overhead roofing is the real thing, too, made entirely of bamboo thatch material. 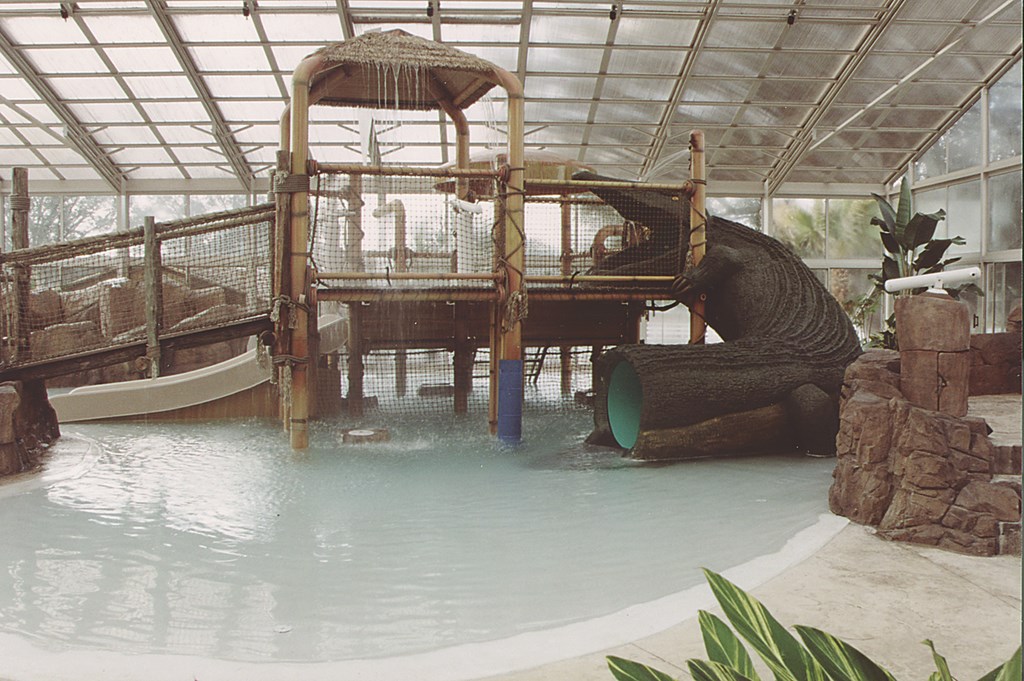 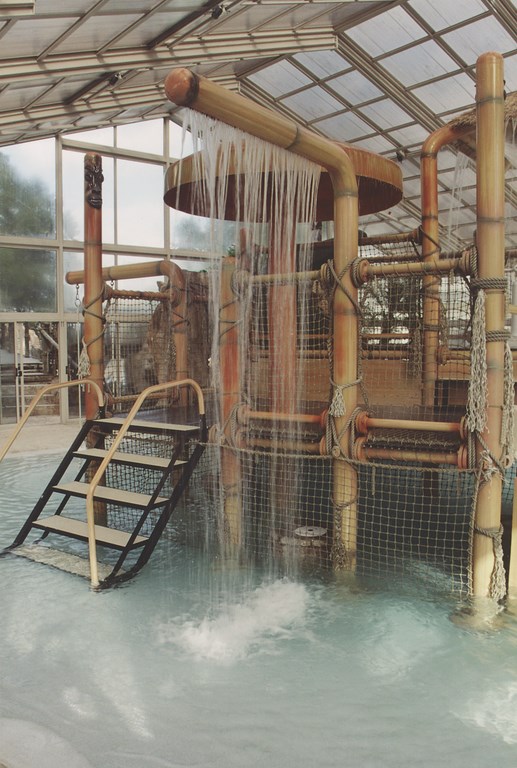 There’s also a separate rock structure with a sheeting waterfall that’s built for climbing and can be defended using a water cannon mounted in a faux-rock turret. (This rock structure also visually links the rockwork outdoors to the interior space of the kiddie area.)

There’s even a new restroom – all wood-frame construction with split-faced bamboo walls and bamboo reeds on top. The doors, by the way, are labeled for “damsels” and “headhunters.”

In all, the kiddie pool contains 23,000 gallons of water and circulates at about 2,000 gallons per minute – a feature designed in such a way that it could easily meet the demands placed on the sanitizing system by dozens of children playing at the same time. Indeed, the plumbing is all done to Florida commercial standards. Among other things, that means that all returns are gravity fed: There is no powered suction on the drains, thus preventing even the remote chance of suction-related injury.

The outside pool, a large free-form vessel, contains about 60,000 gallons of water also circulated at the brisk rate of 2,000 gpm. It ranges from zero to nine feet in depth and is finished in gleaming white Hydrazzo supplied by Aquavations of Coral Gables, Fla.

The central structure in the pool is a second, larger treehouse and slide that pick up the main theme of the indoor play area. Everything outside is made of either natural hand-placed material or hand-sculpted artificial rock and faux wood. The bridge to the treehouse structure is made of eucalyptus planks with hand-woven rope mesh. (To meet commercial safety codes, the mesh had to have stitching on four-inch centers.) 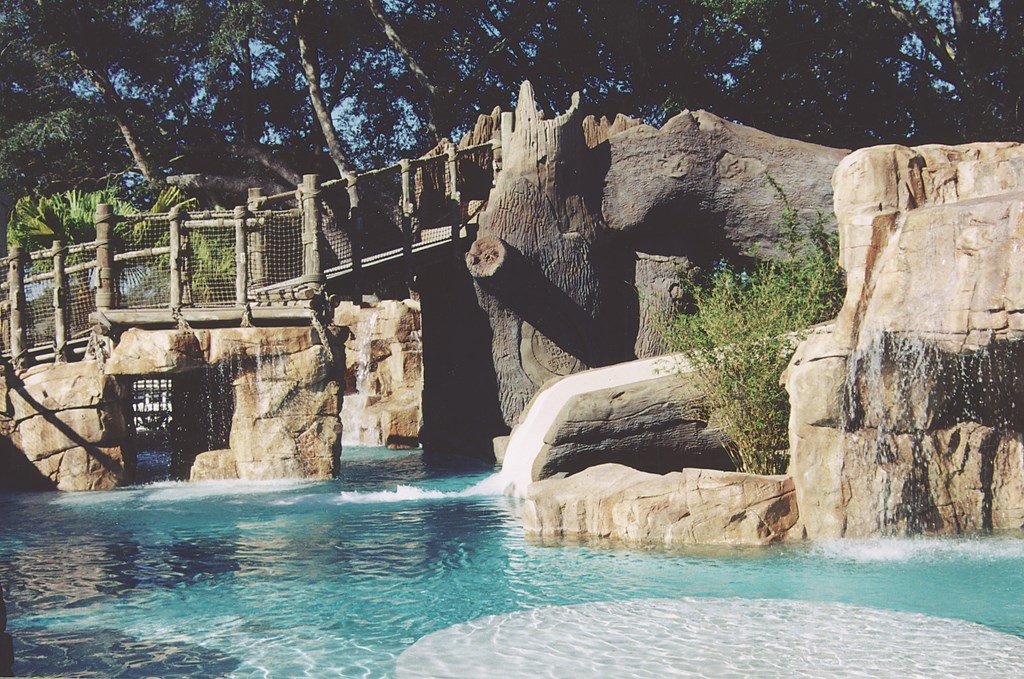 The tree slide is a full 60 feet in length and dumps bathers into the deep end of the pool. It features a prefabricated fiberglass trough surrounded by a hand-sculpted, hand-finished tree trunk. In designing the treehouse and slide, Nauman configured the fallen trunk to have the profile of a horse’s head. It’s a huge creative detail – but barely noticeable until someone points it out.

The rock structures outside are all meant to suggest a southwest/Arizona feel – all very rugged and masculine.

The grotto (located beneath the bridge) provides an interesting point of entry into the pool: When walking from the kiddie pool toward the outside pool, you come to a set of steps that leads down into the water and through a tunnel in the rock structure. Inside this area, we created a spooky, haunted-cave effect with a fog machine and soft, fiberoptic lighting supplied by Fiberstars of Fremont, Calif. We also added some spa jets to give the water the turbulent appearance of a witch’s cauldron. Quite creepy. 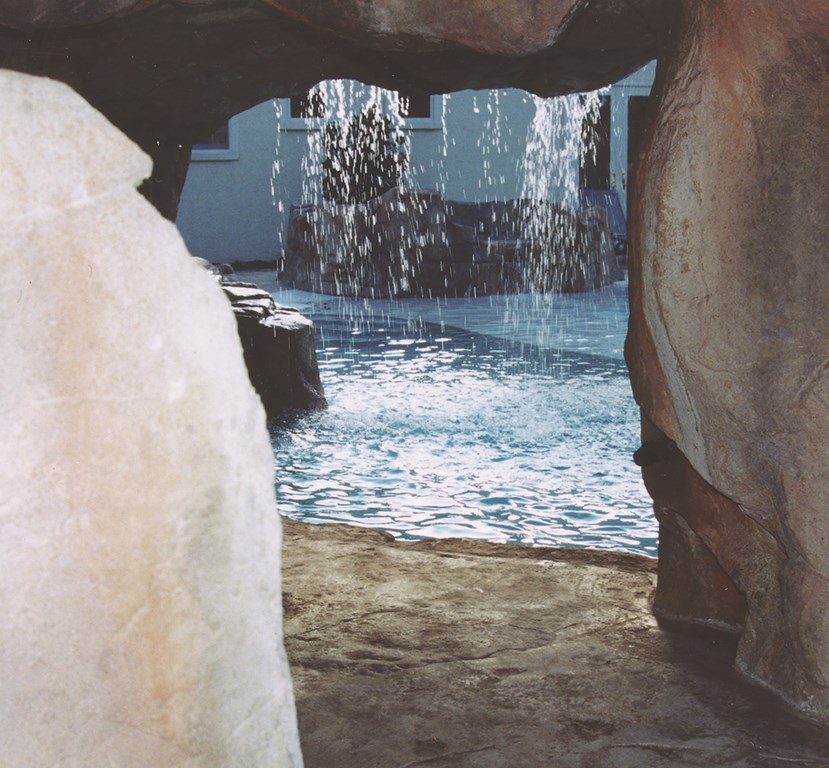 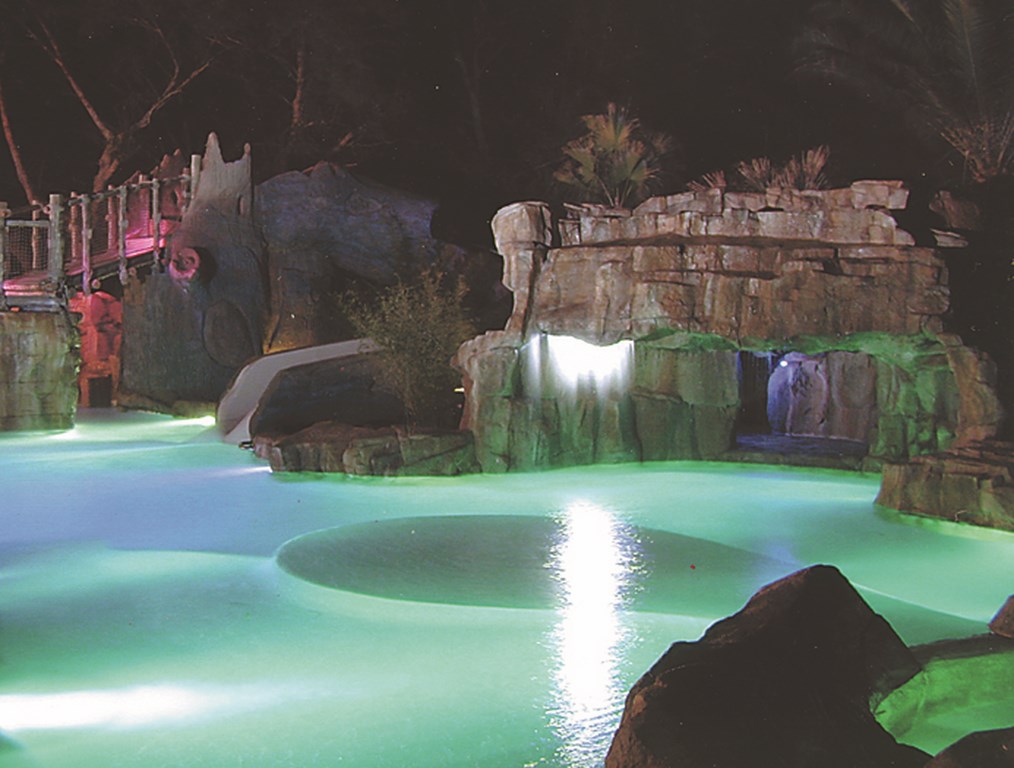 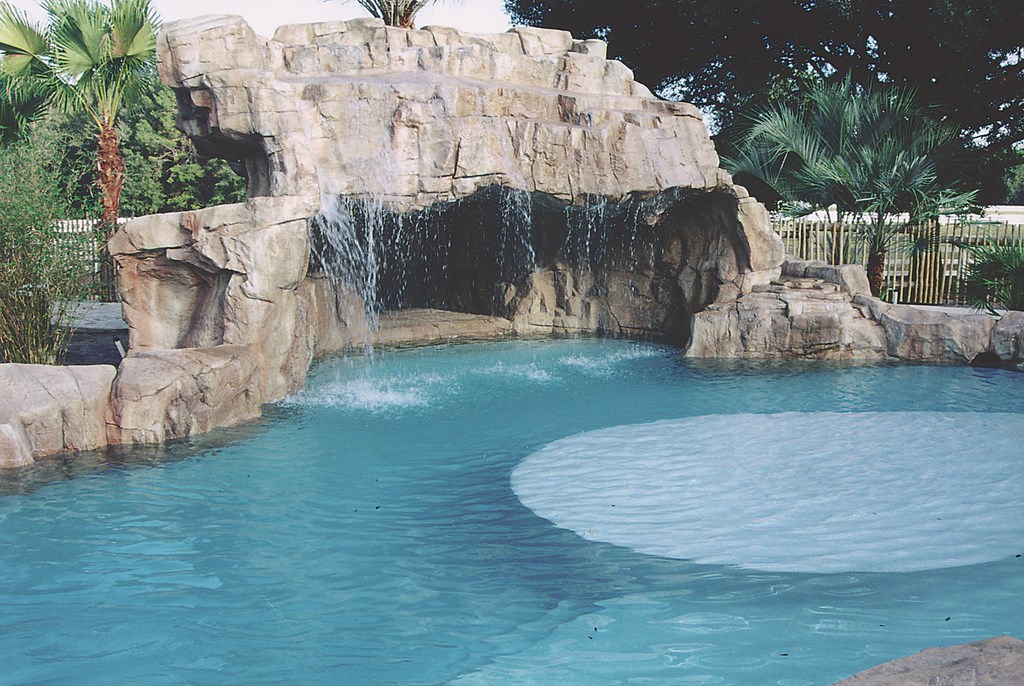 There’s also a second major rock structure on the far end of the pool near a beach/sunning area. A cave extends beneath the structure and includes a bench area positioned beneath another rainmaker fixture. The top of the structure contains planters for landscaping. Another rock waterfall is located adjacent to the elevated pathway leading to the top of the slide – a fine example of Nauman working to add visual interest and detail to the overall design.

The outside area is enhanced by a seven-foot spa positioned adjacent to the shallow end of the pool. Dozens of fiberoptic lighting fixtures are installed in and out of the pool, and the whole area looks absolutely amazing at night.

As we were working through the initial planning of the two swimming pools, the client decided to take us for ride around his 135-acre property. Not far from the pool area was a wooden structure that served as a station for a half-scale diesel railroad, just like the kind you see at amusement parks. A beautiful faux-steam engine and two canopy cars ran along the 1.5 mile loop. As we rode around the property, the customer asked us if we could do anything to make the train ride more interesting. Thus began the design and installation of four separate themed areas along the course of the “Foxtrotter Railroad.”

The themed areas include a rock structure that serves as a hideout for two animatronic bandits who hold up the train; an African lake complete with alligators, elephants, giraffes, monkey and hippos; a Florida river complete with a panther, alligators and a beaver dam; and, finally, a massive faux-rock sandbox area where children can dig for fossils.

In all, the train ride has 20 moving figures and another 20 static ones. The animatronics system was designed by Nauman and manufacturered by KX International of Apopka, Fla. The figures are run mostly by pneumatic power supplied from a central compressor station located near the center of the railroad loop. The compressor provides air pressure to substations located in each themed area, and a series of electrical relays and switches operate the various moving parts in each figure.

The first stop on the ride is the bandit hideout, where two highly detailed figures rise from beneath a rock face to hold up the train. A synchronized soundtrack with music and voice-over narration plays through overhead speakers on the train.

The most ambitious of the four areas is the African lake, the second stop on the approximately half-hour tour. There we built a 5,000-square-foot lake that includes a 20-foot central island reached from the shore via a wooden bridge. An African-style hut serves as a shady destination on the island, from which you get the best views of the animatronic elephants and alligators. 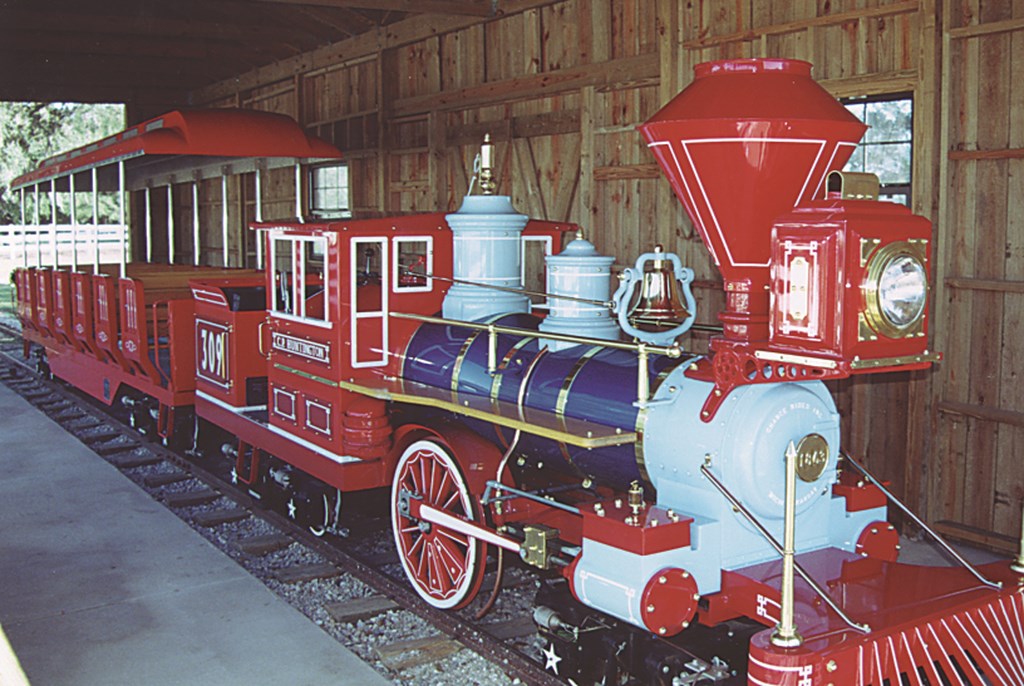 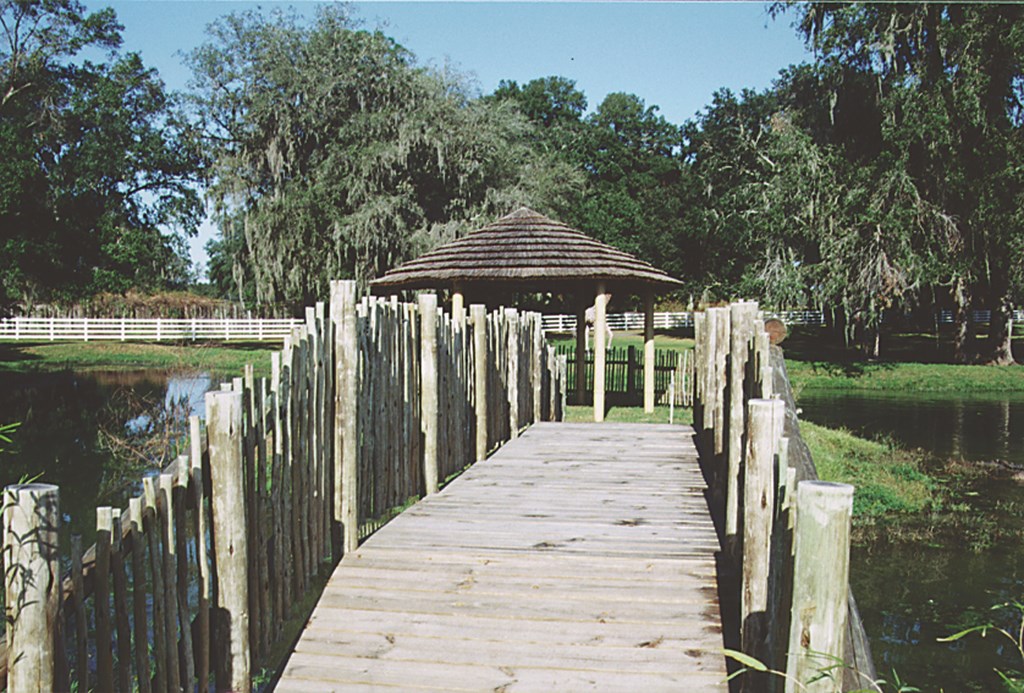 Next comes the Florida-themed location, starting with a concrete path along a faux-rock stream that passes a beaver dam – and a 12-foot alligator triggered by an optical sensor. As you walk by, the ‘gator surges toward you, opening its mouth and baring its teeth. There’s also a cave that houses an authentic looking Florida panther. The stream itself stretches a full 200 feet in length.

Finally, at Simon’s Dig Site, kids have a chance to poke around in the sand in search of (fake) dinosaur fossils set into the rock structure beneath the sand. (There’s no water at this stop.)

At this writing, our work at Foxtrotter Ranch is ongoing. At some point in the not-too-distant future, we’ll wrap up our work with landscaping, lighting and a formal waterfeature to show off a beautiful stallion sculpture at the entrance to the property.

The area adjacent to the train station already features a merry-go-round and a faux rock wall for climbing; before we’re through, we’ll also be installing a row of “teepee-style” overnight lodgings for guests lucky enough to be invited for sleepovers at the ranch.

We’re not certain when we’ll be packing up and leaving the jobsite for good: It seems that every time we think we’re getting close, the owner comes up with another set of new ideas.

Even with that small bit of uncertainty, this project so far has been a pure delight. It makes us keep thinking how great it would be if every one of our clients had and sustained this uncluttered, child-like focus on fun: It’s infectious, and it brings out the kid in everybody who visits the ranch.

Steven Knight is president of Certified Pool Mechanics/Certified Enviroscapes, a watershape design and construction firm based in Bonita Springs, Fla. A 23-year veteran of the swimming pool industry, he began his career in 1977 in Fort Myers, Fla., where he specialized in residential pools. In 1992, he acquired Certified Pool Mechanics, a maintenance firm, and immediately expanded the company’s operations to encompass design and construction. Moving further into commercial and institutional work, Knight founded the company’s Certified Enviroscapes division in 1996 to focus on highly specialized, themed designs and construction for amusement parks, museums and public aquariums.