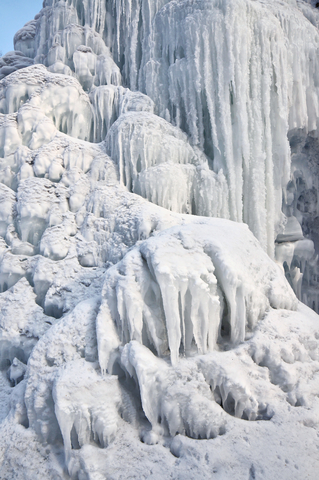 The cold snap that gripped huge parts of the country earlier this month put me in mind of one of my favorite things – and I feel deprived, because I’ve never lived in a place where such things happen.

Back in 1984, Judy and I took a train trip across Canada from Vancouver to Banff. It was November and brutally cold by the time we reached our destination, but we braved the wind and snow to do a bit of hiking in the beautiful terrain near Lake Louise – just breathtaking, both literally and figuratively.

While walking along a stream, we came across a cascade that started about ten feet over our heads. It had frozen over for the most part, and I recall the hollow resonance of the water flowing rapidly behind the waterfall’s blue-white armor – a sound I’ve never forgotten. But the visual effect! I’ve always been a big fan of the Catalonian architect Antoni GaudÃ­, and there’s something about the forms the ice takes that reminds me of the flowing, mounding details of several of his buildings. 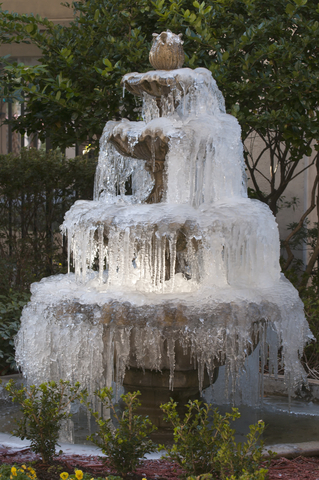 Ever since, this phenomenon of a frosty glaze over flowing water has fascinated me – particularly in the form of frozen fountains, which, as an urbanite and businessperson, I’ve been far likelier to see in my wintertime travels through the years. I’ve also come to realize that finding these fountains can be a matter of luck and good timing: In lots of places, fountains are closed down for the winter, so it helps to be on hand during an early, unexpected cold snap to catch the spectacle of ice massing into otherworldly compositions. 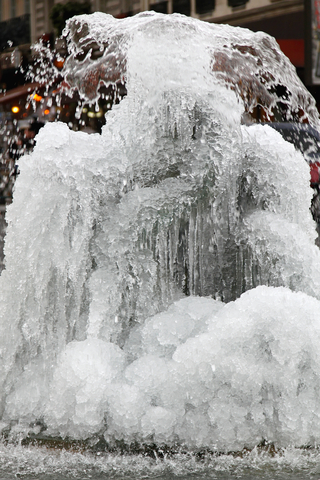 I have no specific destination in mind for you this time, only the suggestion that if you happen to live in or are planning to visit a place where it gets wickedly cold in winter and there’s a year ’round fountain or stream nearby, you should bundle up, get to the water’s edge and spend some time listening to and studying the scene. It’s so different from what you’ll see and hear in the summertime, and for my money the experience is all the more fun for being relatively rare.

The photos scattered along this text give you a sense of what can happen out there in the cold; if you want to see a video I’ve enjoyed, click here. (You don’t need to watch the whole thing to appreciate what’s happening, but do hang in there until the videographer does some close-ups.)

As for myself, I’ll be a bit jealous here in southern California — as I am straight through almost every winter: So much I’d like to see!