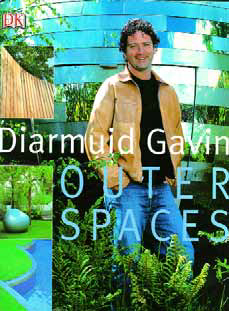 If you’re uncomfortable with ultra-adventurous design schemes, you can stop reading this review right now.

If, however, you find inspiration in projects that are completely original, then Diarmuid Gavin’s Outer Spaces is an amazing and rewarding book. The 256-page text (DK Publishing, 2003) covers 25 mind-blowing projects by this award-winning Irish landscape architect and host of his own PBS series, The Home Front.

Gavin has become something of an international celebrity with a reputation for creating what might loosely be termed “contemporary spaces” that use materials, shapes, plant materials and water in extraordinary and surprising ways.

In this book (one of several he’s published), he starts by discussing his background and philosophy. He explains that in the early 1990s, after having won several design awards at the prestigious Chelsea Flower Show, he began to recognize that everything he and other designers were doing was no more than a grand repetition of the past.

Inspired to break from tradition, he embarked on a quest to tear down the walls of traditional exterior design by using forms and materials that run toward contemporary style but that are otherwise difficult to categorize. As he explains, however, what most people think of as “contemporary” is extremely limited and often quite austere, when in fact it is a much more open-ended and varied design sensibility.

Using his own work as an example, he makes his point in a big, bold way.

The 25 case studies are broken into six categories: “Play,” about spaces for kids; “Parties,” on spaces for entertainment; “Inspiration,” about meditative and tranquility gardens; “Nature,” which focuses on blending contemporary design with naturalistic design elements; “Unwind,” on projects meant purely for relaxation; and “Dreams,” on the wildly unusual.

In each case study, he generously discusses the projects’ goals and missions, the inspiration he used to develop the design, the process of working through renderings, how he achieved some of the more unusual effects with respect to construction, and the end product. All of this is extremely helpful in developing an understanding of his work, some of which is so unusual that the point might be lost in simply looking at the beautifully shot, arranged and captioned photographs.

The details range from the extremely subtle and simple to the wildly bold and complex. One of his gardens, for example, is organized on various levels in an artfully composed set of trays. Another uses steel grating in conjunction with plant material to create grade transitions. In another instance, he floats a glass garden room atop a glassy body of water, while in another he uses a human-sized slinky to create a transition from one space to another. One of my favorites is a glass room that slowly moves through a large garden while you sit in it, courtesy of a set of tracks he installed.

Each project has elements that challenge the way we think. In many cases, it’s a matter of using materials or shapes that we wouldn’t consider mainly because it’s not something we’ve seen before – a curvilinear trellis, for example, or a tree swing in which you sit in a giant metal ball. There are also fascinating walls, pathways, shade structures, caves and grottos – and lots of water, which makes this book extremely useful for watershapers.

Bottom line: This is a terrific book, if for no other reason than it challenges us to think of exterior design in a fresh way. For my part, I’m already including a few Gavin-inspired details in some of my designs.