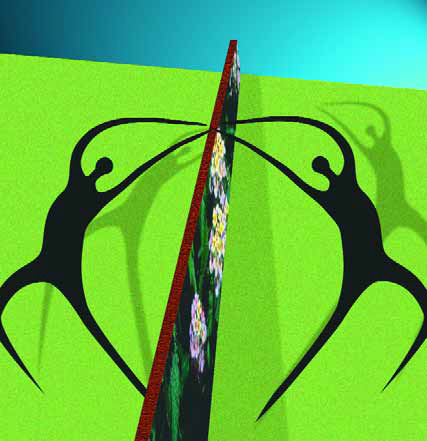 We’re all aware of local codes and other requirements regarding the fences we put surrounding watershapes: Many of the solutions we are forced to adopt can be quite unsightly and often detract significantly from the visual beauty we’re trying to create overall with our watershapes and planting plans.

Unfortunately, many designers and contractors seem to see all fences as being grossly equivalent, meaning that they’re taking the rules that apply around watershapes and translating them into a non-watershape settings, probably because it’s the path of least resistance at a time when the public seems to be leaning quite heavily toward twin desires for security and privacy.

Although I understand the need for those rigid qualities, I would like to propose that no fence, wall, hedge or other barrier between your client and the rest of the world needs to be so imposing or so explicit in sending the message, “Stay out!” I do so in the belief that there are many aesthetically pleasing ways of establishing barriers that serve whatever purpose your client is trying to achieve.

As a case in point, I was brought in to design the landscape for a corner property in the Pacific Palisades area of southern California. When I first arrived on the scene, the property was covered with dead or dying sod interspersed with a few random clumps of Agapanthus. This was obviously a landscape that hadn’t been touched in years.

The property was shaped like an elongated rectangle, with the L-shaped house positioned relatively close to the southeast corner. There was a very small stretch on the east side of the property (enclosed by the shape of the house) that functioned as a private entertainment/backyard/play area.

What remained was a large, L-shaped area facing the street that was basically an all-purpose frontyard/sideyard/play area. The space was defined by the home and the curb; otherwise, it was completely open to the street and neighborhood.

The homeowners had two young children at the time and wanted to enclose the open portion of the property in some way that didn’t involve creating an imposing barrier. The idea was to maintain the open appearance while setting up some sort of formal boundary that would keep the children in and dogs and neighbors out. In other words, they weren’t looking to put up a six-foot-tall masonry wall.

They also enjoyed working in their garden and wanted to fill the newly defined space with cutting flowers and enough plants so that they’d be able to teach their children about gardening. They also saw it as a way to entice themselves out into the yard every weekend.

At that point, we started talking about their options with respect to “open fencing.”

What I mean by open fencing is a barrier that stands well this side of a solid cinder-block wall or even a tightly paneled wood fence – that is, something in chain link, wrought iron or open wood framing.

In this instance, my suggestions were about fence choices that would also become functional with respect to their planting scheme, and before long we settled on a split-rail fence. 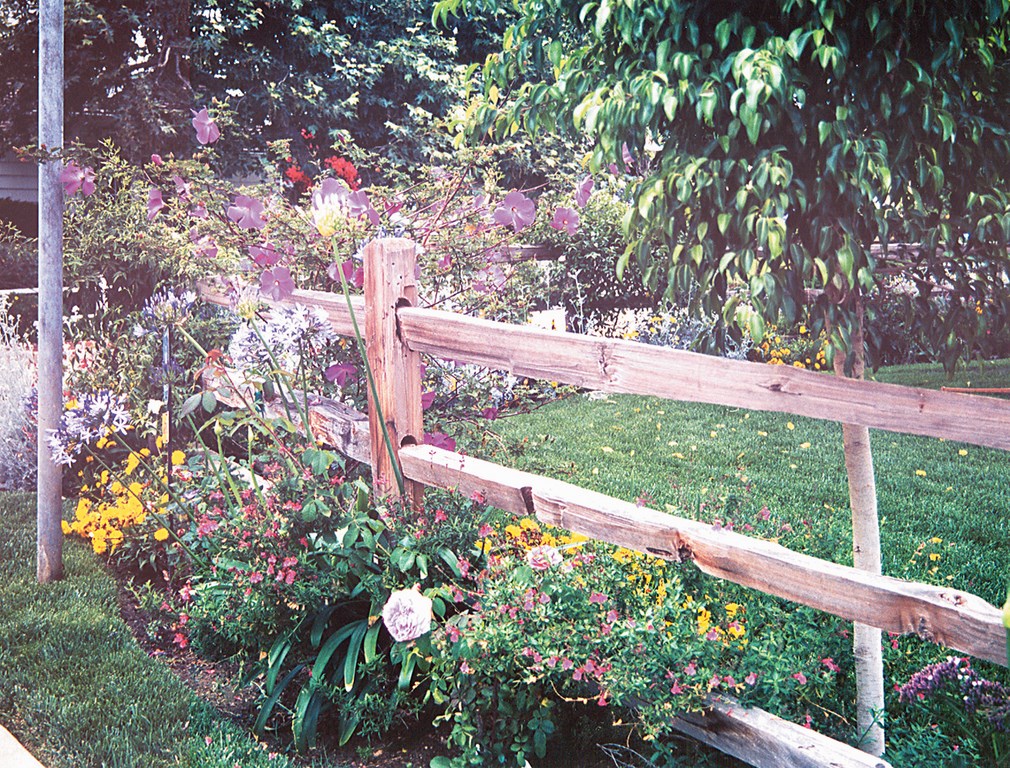 The rustic nature of this type of fence immediately gives off a friendly, neighborly feeling. It is visually open; blends with and will become one with border plants; allows the homeowners to see beyond their property; and allows neighbors to glimpse in. At the same time, it creates enough of a barrier to discourage dogs while separating their children from traffic and the street.

I set the fence in about four feet from the curb on the west and north sides of the property, leaving an opening for the path to their door. I then created a meandering border on either side of the fence that was no wider than 18 inches at any given point. This left room on the street side for sod, which gives visitors who park alongside the property the opportunity to open their car doors and step onto something other than flower beds.

The street-side border strip was planted mostly with low-slung perennials so as not to create maintenance nightmares as the plants grew. (It’s always and obviously important to consider the anticipated mature size of the plants and decide whether you want them to grow into the space or stay smaller so they won’t interfere with the function of the surrounding space.) 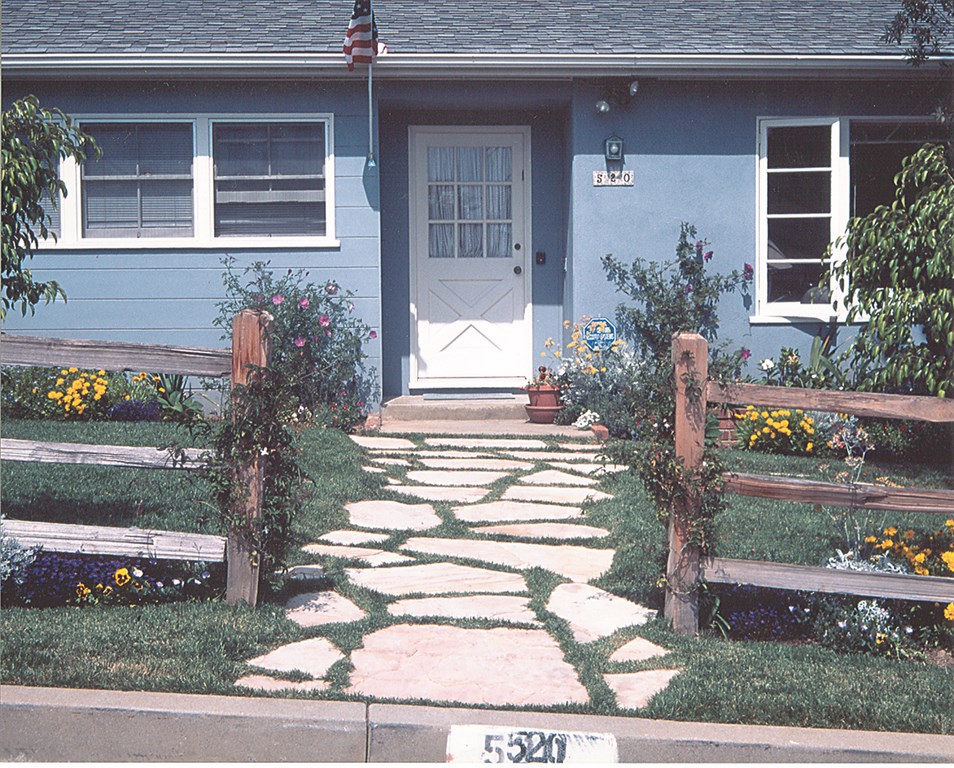 On the inside of the fence, I anchored the border with Birch and Ficus trees. (As I’ve mentioned elsewhere, I’m not a big fan of planting Ficus, but in this case I knew they’d be far enough away from the house and underground services that their invasiveness wouldn’t be an issue.) We also planted a variety of perennials, roses and shrubs and also included a sprinkling of annuals for some splashes of instant color.

Next, I established a mirroring border along the home’s foundation (excluding Ficus, of course) to tie the yard together visually, which left a large, open area for a lawn suitable for playing, entertaining or whatever else might come up. It was important to leave this area clear to retain the same sense of openness the family had valued before the fence was installed.

By having plants that hugged the fence and the foundation, we produced an environment lush with plants that was open enough to support the need of the family for a space that was anything but claustrophobic.

Beyond being rustic and appropriate to the home and neighborhood, the split-rail fence has worked marvelously with the plants we selected. This was especially true at the break we created for the entry pathway: We planted Pink Jasmine vines that completely cover the fence on either side, so visitors in the spring will be treated to exquisite fragrance and beautiful flowers without ever noticing a barrier of any kind.

Depending upon the style of the home and characteristics of the neighborhood, there are lots of options for open fencing beyond split rails. Here are a few of the possibilities:

[ ] Chain-link fence. I know, I know. But don’t instantly reject this candidate, because great open-work barriers can be created with this cheapest of materials. A good, sturdy chain link fence is the perfect support for vines – which is part of the point, because I would never recommend using this material unless you plan on covering it completely.

Where I live and work, vigorous growers such as Blood Red Trumpet Vine mature into perfect complements to chain link, forming green walls that just don’t seem imposing. When planted with Creeping Fig, such green walls also serve as great backdrops for other plantings.

[ ] Wrought iron. I’ve never been a big fan of enclosing properties with wrought iron fencing, but like chain link, this material is a wonderful host for vines and creeping plants and can help preserve an open feel. When surrounded by perennials and shrubs, boundary effects similar to those I achieved with the split-rail fence can be developed.

[ ] Wire fences. These open-work barriers offer a highly architectural, slightly industrial but extraordinarily crisp option in the fencing realm. The stainless-steel “ropes” are under some tension, which makes them durable barriers as well and efficient support systems for plants. In contemporary or modernist settings, this approach has considerable appeal.

[ ] Natural branches. Using bamboo or willow is a particularly rustic way to create a barrier. There’s some expertise involved in using these plants and getting them to “behave” as needed, so I would recommend consulting with someone who has experience before embarking on a fence project with them. One thing I do know is that these fences are typically not as sturdy as those made of other materials I’ve mentioned, but the aesthetic and creative possibilities are more than sufficient to make this option worth considering.

[ ] Hedges. This is an option that takes time to develop and so may not be ideal in all cases, but low- or medium-height hedges can set up a green border that discourages intrusion without cutting off views. The list of candidate plants is extensive, from boxwood to a range of evergreens. It’s largely a matter of deciding whether the border needs to function right away – or can take its time to develop.

There are many more choices for creating good-neighbor fences, so long as you and your clients consider that there are ways to balance a basic need for privacy and security with a desire to keep an open, beautiful view.