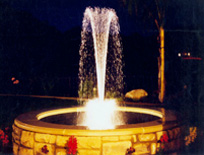 This lesson involves the performance of a simple but elegant aboveground fountain.

As is true of all watershapes, fountains need to be built in such a way that they reliably hold water and don’t leak. That’s an obvious given, of course, but water being the clever devil it is, if you miss the slightest detail it will likely find a way to escape — sometimes in not-so-obvious ways.

Scenario: This was one of my company’s own projects, and it seemed straightforward from start to finish. The basin we built was 18 inches above grade and about eight feet across; it was made as a monolith with poured-in-place concrete.

The first waterproofing measure in this type of construction involves vibrating the concrete into place, thereby reducing its porosity and the ability of water to migrate through it. In this case, we also coated the interior surfaces with Thoroseal (BASF Corp., Shakopee, Minn.), a widely used waterproofing agent that works well across a range of applications.

In all bodies of water, you can always assume some degree of water loss as a result of evaporation. This is increased in fountains by the fountain effects themselves, even if all that happens is that the water flows over a weir and drops only a few inches. That’s why on many of our fountain projects, we’ll install a simple quarter-inch fill tube tied into the sprinkler system: When the sprinklers come on, water flows into the fountain to make up for some or all of the evaporative losses.

Shortly after this project was complete, the homeowner called and reported that the fountain was leaking. Our foreman went out to the job site and, sure enough, the fountain was completely empty, indicating that there was a significant leak of some kind. So he applied a coat of elastomeric sealer on top of the Thoroseal, figuring that would resolve the issue.

It did not, and the homeowner called with a second report on his leaky fountain. That same foreman returned and was amazed to find that the fountain was once again bone dry. So this time he applied a rubberized paint to create an integral membrane — guaranteed, he thought, to stop the leak. A short time later, the homeowner called to let us know the fountain was empty again.

This time I went over personally, because none of what had taken place made sense. As I was inspecting the fountain, however, the homeowner gave me a huge clue by mentioning that he himself was puzzled because the fountain didn’t leak every day. He noted that there were days when it functioned flawlessly and didn’t appear to lose any water at all. “In fact,” he said, “it only loses water on the days when the sprinklers come on.”

Immediately, I inspected the fill tube we had installed at the floor of the basin: Mystery solved!

The fill tube would come on and add water just as it was meant to do, but when the sprinklers shut down, the system created a siphon that reversed the flow, sucked the water out of the fountain and let it dribble out through the lowest sprinkler heads in the system, which were about a foot lower than the bottom of the fountain.

The Fix: We repositioned the end of the drip line to create an air gap above the water’s surface, thereby preventing any further occurrence of the unwanted siphon effect.

Lesson Learned: Because our foreman kept trying to fix the problem the same way with no success, this situation fell into the classic definition of insanity: trying the same thing time and again and hoping for a different result. What was needed in this case was a fresh perspective — and a helpfully curious client!