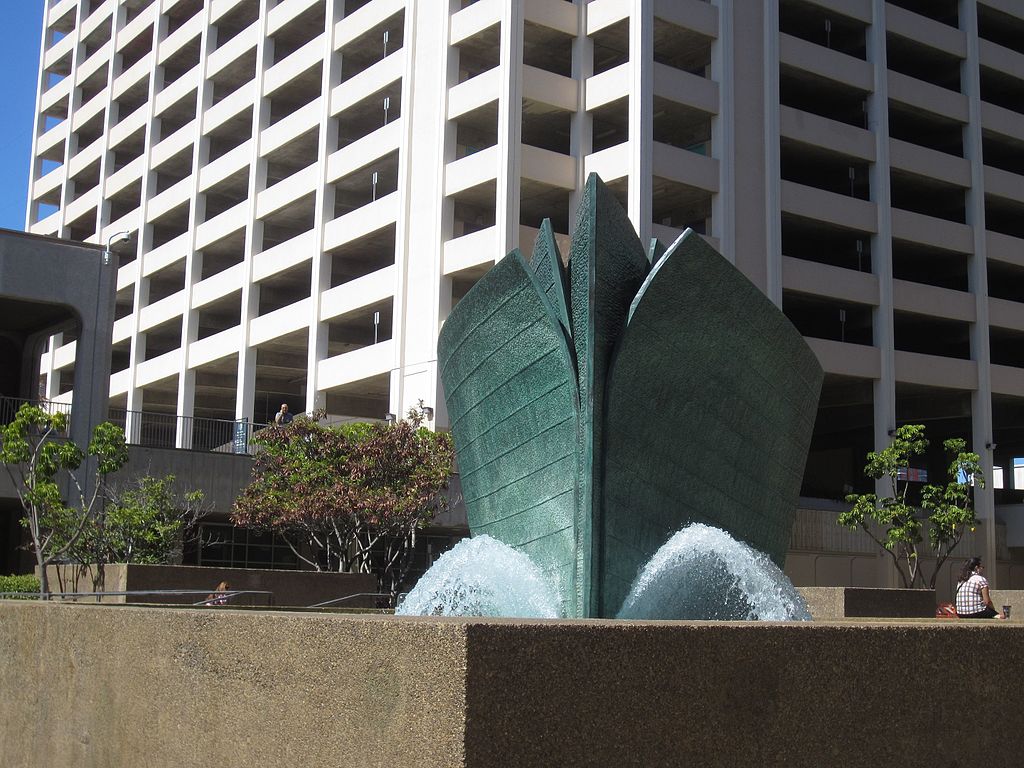 From time to time, I’ll come across a fountain or waterfeature where jets or streams of water are used to suggest “motion” on the part of an accompanying fixed object. The objects in question are typically made of stone or metal – that is, materials embodying solidity, heft, timelessness and the utter absence of motion.

Many years ago, as one example, we published an article by frequent WaterShapes contributor Randy Beard, who wrote about a composition he worked on in which a platform of flowing water at the base of a sculpture of a breaching whale served to suggest it had recently broken the water’s surface (click here). And one of my all-time favorites is the galloping-horse sculpture in Dallas, where the hooves of some in the line of dashing equine splendor raise splashes from a stream they’re crossing (click here).

A half-dozen other examples of fountains of this type also come quickly to mind, but you get the idea. Done well, this is a cool, softening, naturalizing, communicative, engaging approach – and it gets even better when you’re just walking along the street and happen to catch the offered illusion at a favorable angle.

That happened to me not long ago on a visit to San Diego, Calif., where I was walking along and minding my own business when I came across “Bow Wave,” a fountain in which the business end of a big ship plies its way through water washing along its flanks. At a glance, it suggests the abundant thrust of a ship’s passage as well as the massive resistance it had to overcome to make any headway.

From most angles, you can see that the ship is cut off a short distance back of the bow, but I first saw it in such a way that the leading edge of the sculpture was coming right at me (pretty much at the same angle seen in the image above). It’s quite a nice illusion when it catches you off guard – and a slightly startling one at that. 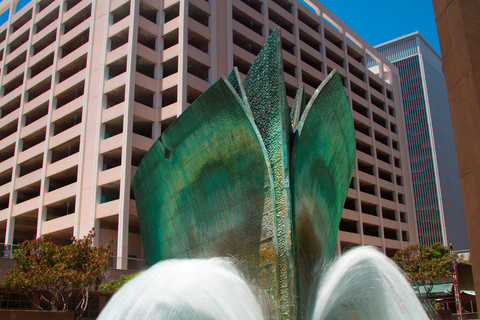 Designed and sculpted by Malcolm Leland and installed in San Diego’s Civic Center Plaza in 1972, the composition does a wonderful job in its suggestion of motion; in fact, it’s among the best I’ve ever seen. Its success, alas, reminds me of the horror I felt when I saw that the fountain basin for “The Runner” had been insensitively redesigned in St. Louis: There, the entire, previously successful illusion of motion was cut off by thoughtless jet placement (click here); in San Diego, by contrast, Leland got it just right.

The sculptor was something of a local celebrity in San Diego, but I can find no other instances in which he put his elemental skill as a watershaper to use in any way. That’s a pity, because he certainly knew how to put that medium to good use – simple, but effective.

San Diego’s not a big town. The next time you’re there for business or pleasure, wander by the Civic Center Plaza and be prepared for a nautical treat.