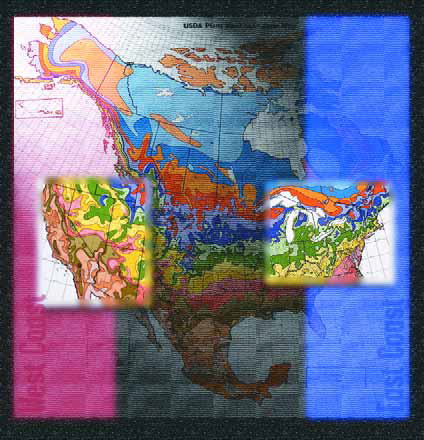 My daughter and I just returned from our annual trip to visit family in Connecticut and used the occasion this time to travel all over the northeast – from Boothbay Harbor, Portland and Camden in Maine to Martha’s Vineyard and Nantucket and other parts of Massachusetts as well as slices of New Hampshire and Rhode Island.

I’m never disappointed by the beauty I find in that part of the country. The landscapes are much lusher than they are at home in southern California, a fact that drives home the point that I spend most of my time in a desert.

The old-growth trees back east are beautiful and majestic, most often seen clustered in groves as part of incredible forested areas, and, overall, the landscaping is much more planned and deliberate than most of what we see at home. Indeed, the gardens are often works of art that have been nurtured for generations, and it is clear to me that gardening is more respected as a form of art in the east than it is in southern California.

Every time I take one of these trips, I can’t help noticing significant differences between east and west. I spent many years on Long Island, but since I left 16 years ago, a whole lot of botanical education has sharpened my eye and I see things that went unnoticed before.

What I find most beneficial in travel of this sort is the opportunity to get out and see the way things are done in other parts of the country. The exposure to new things and the contrasts between regions always causes me to focus on the ways I think, plan and design and, I believe, enables me to add new dimensions to my work by providing me with a perspective I couldn’t ever gain by staying in familiar climes.

When I’m back east every summer, I marvel at the differences in planting styles as well as the workmanship and what people see as appropriate for the area. I once knew a man who hated the word “appropriate” and I guess I see his point, but as I’ve thought about what the word means in the context of planting, I see it as expressing the challenges each region has relative to climate, temperature, the length of the growing season, water resources and even history.

In southern California, for example, we can plant year ’round. Annuals that are available to us in the winter aren’t ready to plant in the east until April or May (depending upon your latitude), while the herbaceous perennials we plant in Los Angeles are annuals in Nantucket. Californians have flowers blooming in February while snow still blankets New England.

Most strikingly, the majority of nurseries and gardening services in the northeast shut down entirely in the fall and don’t resume business until the spring – and those that do carry operations through the winter manage to do so by retailing non-gardening products or offering snow-plow services. And of course, different plants grow in different regions, so what I spot as I drive around Connecticut or Maine are some plants I’m familiar with – but many more that we seldom see or use in Los Angeles.

I also couldn’t help noticing that eastern gardeners have a far more limited selection among fertilizers than we do out west. I was told of concerns about chemicals seeping into groundwater and contaminating the water supply – an alien issue back home because southern California doesn’t have much by way of groundwater resources and in fact imports much of its water from surrounding regions and states.

What I conclude from this set of observations is the obvious point that landscaping is a completely different professional pursuit in the northeast than it is at home in southern California – and I’m certain that this is a point that can easily be extrapolated in a discussion of each of the other distinct regions across the country. (It also reminds me that I write for a national magazine and that the main comment I get is that my columns intimately reflect the place in which I live and work.)

From the plants we use to the masonry we build, everything looks different, is cared for differently and is designed differently. What is an “appropriate” style for one region is not necessarily appropriate for another. And all I can say is, hooray for the differences – and thanks for the lessons I can apply in my own work.

In my observation, for example, east-coast design is more conservative than west-coast design. Not to generalize too much, but there’s a lot less by way of frills and wasted space than I find back home, and I attribute it to the more limited timeframe for planting and caring for gardens in cooler and more northerly climate zones.

So much seems to be better thought out by virtue of being compressed into a shorter span of time. A perennial border requires careful planning and tending to reach a peak during the late Spring and Summer in New York, while southern California’s gardeners have all year to bring along particular plants.

As I think about all these differences and weigh the advantages and disadvantages of working in these two geographies, I find myself envying my eastern counterparts – and wondering why I feel that way.

Actually, it’s simple: The east coast has a rich history of style and a whole flock of time-honored traditions that permeate gardens and garden designs. This history and tradition set the east well apart from the west – as do the manicured, multi-acre properties with their historic plantings and protected stands of old-growth trees. There seems to be greater respect for the land and a heritage that reflects the Old World rather than the Wild West.

I thought about this last point a lot in the context of my recent column on preservation: Old in California is 1960, while old on the east coast is 1660: There’s obviously a greater interest in the east toward preserving traditional styles and architecture than there is in the west.

My favorite when it comes to discussing differences in style is masonry. Granted, building codes probably dictate some of these distinctions, but I consistently noted the superior quality and appearance of the masonry walls throughout Connecticut as compared to Los Angeles. 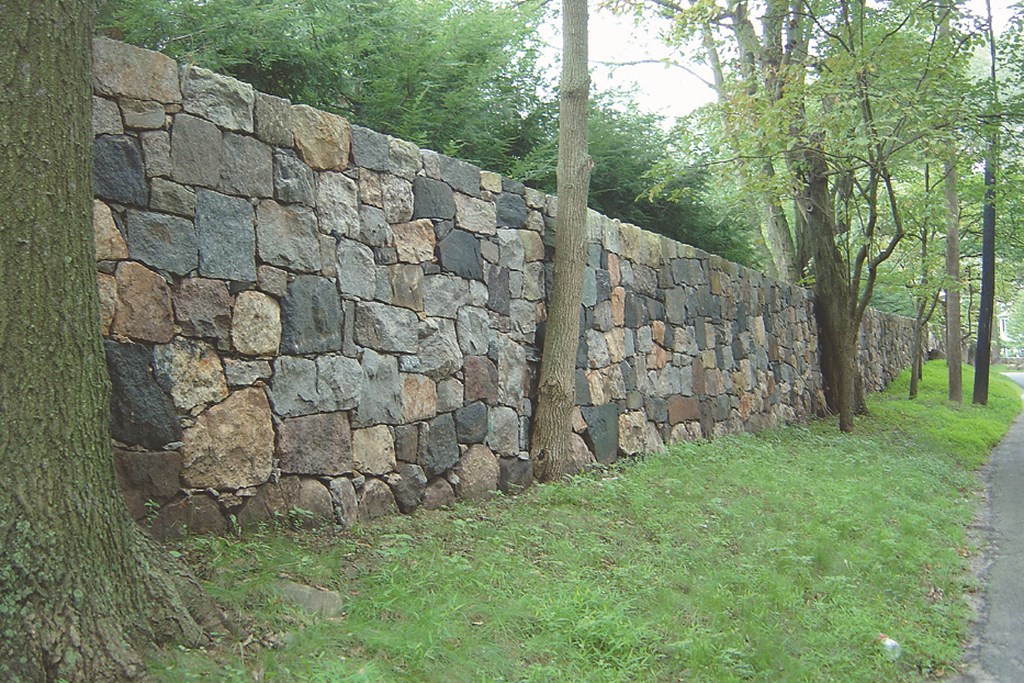 That’s not to say we don’t have good walls here, but the attention to detail I see on the residential walls in Greenwich and surrounding areas recalls the skills of classically trained English stonemasons – no visible grout lines and stones that look as though they’ve been there forever. So what if they take longer to build: I’d say it’s worth the wait! 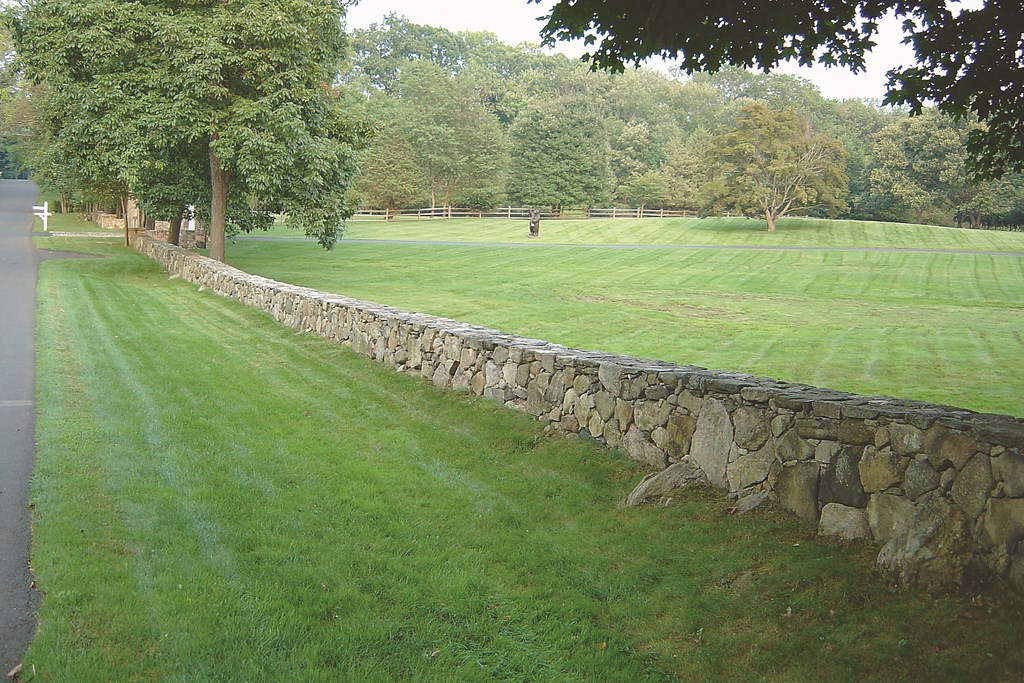 What’s more, these fieldstone walls are perfectly appropriate to their setting. I’ve seen walls like these in southern California, and I can only say that they tend to look out of place, as though the wall had been imported from the east and reassembled stone by stone by folks who didn’t truly have a feel for what they were doing. And then there’s context: You can spot these walls all over New England, compared to the one in front of the solitary Tudor-style home that stands out like a sore thumb in the row of ranch-style homes with split-rail fences in Los Angeles. 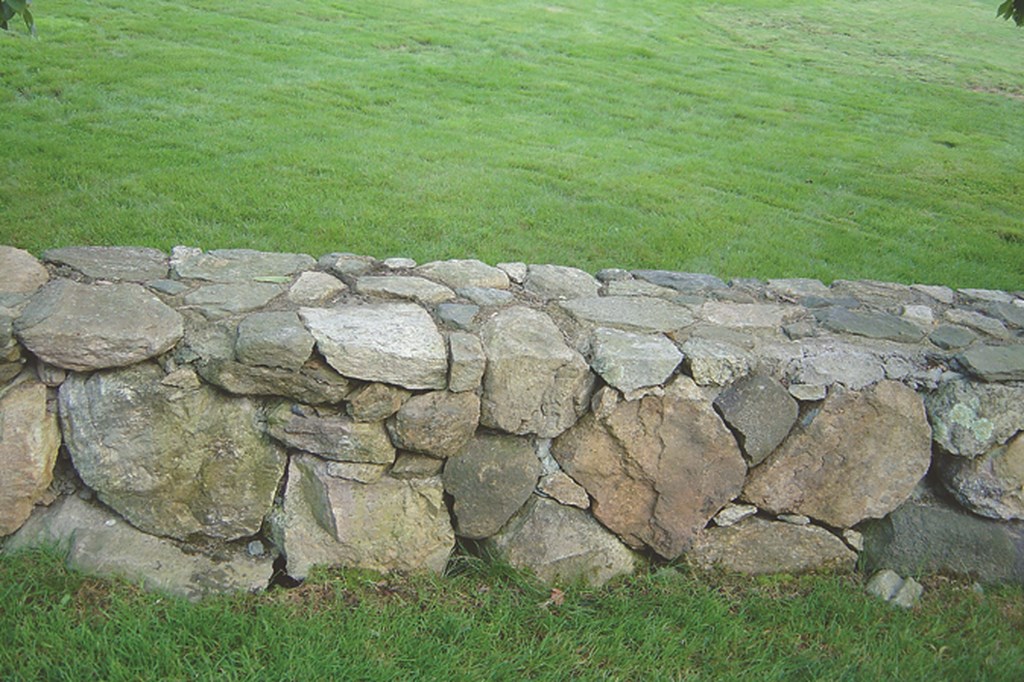 Beyond the masonry, the most notable differences in landscape design have to do with the placement of plants in eastern gardens.

While traveling in the east, for example, I consistently saw plants placed in consideration of their mature sizes. Whereas I will fill up a border with plants that will collide with one another in a couple of years, most gardens I saw on the east coast had their plants placed farther apart.

It’s as though eastern gardeners have a stronger sense of permanency in their gardens than western gardeners. It’s another broad generalization, but it seems that most California gardens aren’t planned in the belief that they will be there 50 years from now, while New England gardens are planned with the expectation that they will last for generations.

There is also what I would describe as considerably more formality to designs in the east. Everything seems to be based on tradition, history and time-honored practices and values with an eye to permanence. By contrast, west coast gardens seem to be more temporary – ready for digging under and replacement in a few years.

As I suggested above, I believe that the hallmark of east-coast design is the rich tradition carried by its practitioners. Yes, new ideas and plants can be incorporated, but designs are meant to last and are based on the history of the area and an attitude about longevity we don’t expect to find in the gardens of southern California.

The irony is that I think the west started out with the intention of maintaining its gardens in line with the grand traditions of the east (in fact, quite a few historic gardens survive in the area), but I think we have been lured off track by climate and year-round growing capability. It’s given us a conviction that gardens are temporary and can be played with and rearranged endlessly. At a minimum, we have much of the year to play and get things looking right.

I for one would love to have clients who were willing to experiment with a greater sense of permanency in their gardens at the expense of the quest for “lots of color.” So far, however, I’ve found few signs that very many are willing to buck the trend and think in longer terms.

Until the tide turns, I refresh myself with annual trips to the northeast – and look forward to opportunities I have to visit other areas around the country and bring what I see back to my work in southern California.