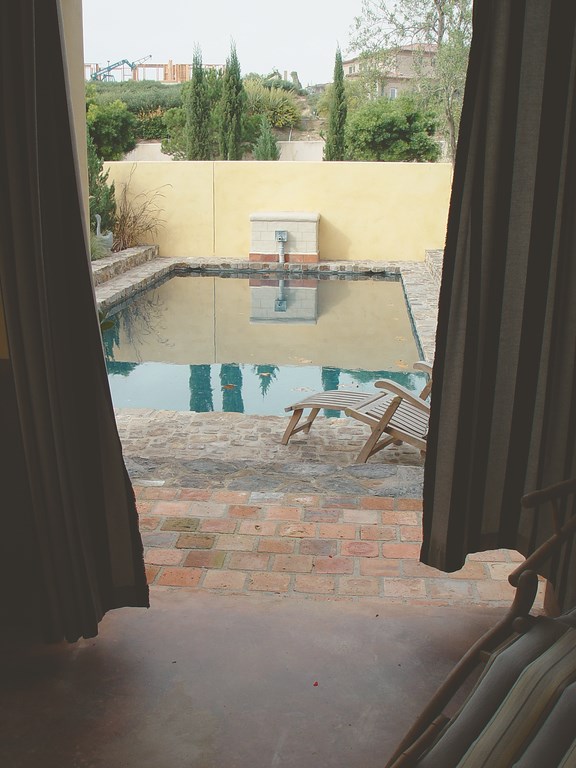 Great watershaping is, we believe, all about creating forms within a context. The thoughtful watershaper will survey all the key elements of a project while conjuring a mental picture that’s as close to the architect’s vision as possible – and then base the work that follows on a solid understanding of both the design and the setting.

It’s always most exciting when we’re asked to consult with the designer about a project before the lot has been graded and the ideas are still flowing onto the sketchpad. In those cases where the designer and homeowner are all the same person and those initial discussions involve the designer’s own living space, the nature of this interaction can truly be something special.

At Pure Water Pools, we’ve had such a privilege on two occasions, both in working with Lynn Pries, a Newport Beach, Calif.-based interior designer who has spent much of her career creating high-end residences across the United States and Europe. These days, she mostly works on one project at a time, carefully selecting and purchasing a property herself and then seeing to every design detail, inside and out, from start to finish.

So far, we’ve built two swimming pools for her homes and have been thrilled to work with a designer of her skill and spirit. Both pools were quite simple in many respects and not particularly challenging from a technical standpoint. The excitement came instead from the opportunity to be a part of the process in which integrated environments were created.

Pries is a thoughtful designer and treats her projects as cohesive ideas in which every element must fit together and complement everything else around it. This is true of the basic architecture and the interior décor, and it extends outdoors to encompass plantings, hardscape, statuary, fountains and watershapes.

Her work has an element of whimsy that’s underscored by a rich and creative application of classic styles and motifs. She begins by sketching on paper, linking all aspects of house, yard, and water to one central theme. But when it comes to exteriors – and her watershapes in particular – she works with contractors and engineers whose expertise influences her design decisions from the outset.

Our first project with Pries was in North Laguna Beach, Calif., in an exclusive area characterized by beautifully styled homes on relatively small lots perched high above the Pacific Ocean. Although her own property did not directly overlook the beach below, it was just a short walk from the tide pools. The air is always cool and salty, and the feeling of the space is entirely influenced by its proximity to the ocean. 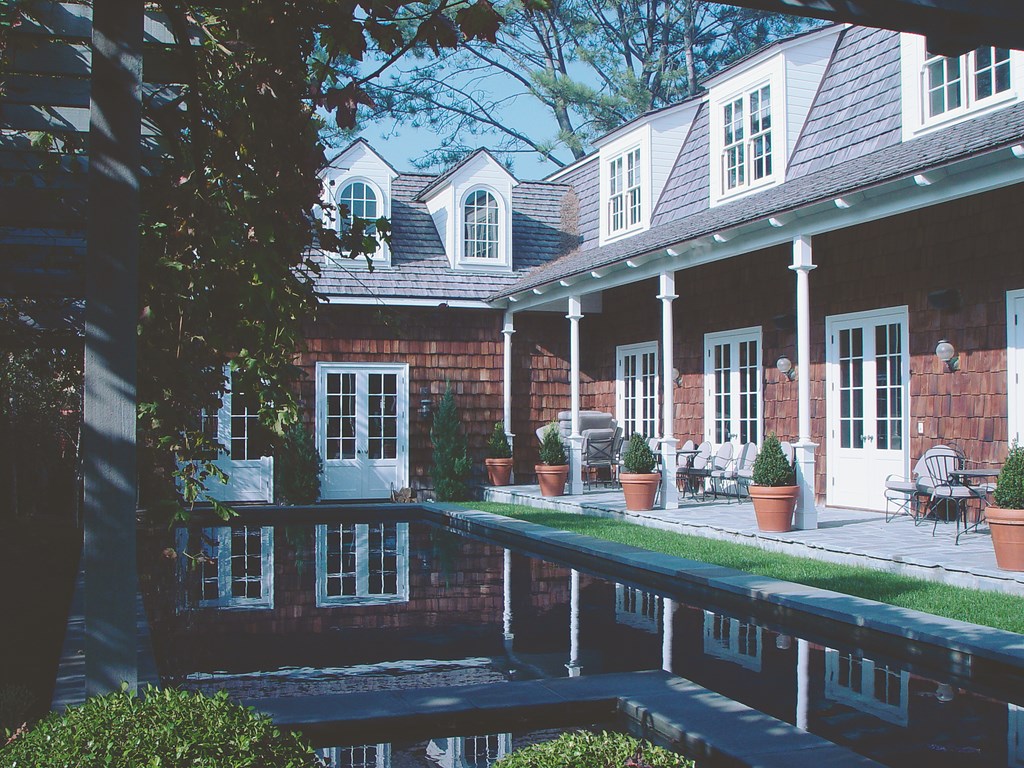 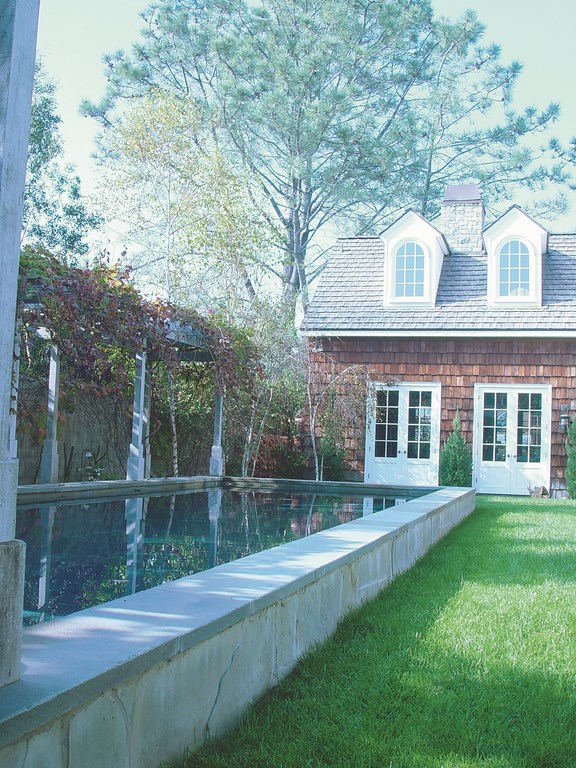 Keying on the surroundings, Pries designed a Cape Cod-style estate, a choice that contrasted with the modernist- and Spanish-Colonial-style homes in the neighborhood but that was perfectly suited to the oceanfront setting. For the exterior design, this translated into clean, straight lines used to define boundaries and mark contrasts and into a rectilinear pool with an understated spa tucked into a corner where it virtually disappears.

The materials she selected had a great influence on the details of the work and the final results. New England bluestone was used to create a flat, elegant coping with a rich combination of deep blues, steel grays and hints of earthy brown. (When the project was completed and the pool filled, we were delighted to see that much of the stone border transformed the medium-gray plaster inside the pool into a dark, almost metallic marine gray.

The simplicity of the rectangle and the hues of the stone are heightened by the lack of any nearby hardscape. The grass grows right up to the verges of the coping, letting the blades soften the sharp edges of the raised stone face. Down the length of one side of the pool there are five pairs of simple pillars, all finished in a soft gray to blend with the coping and supporting a continuous grape arbor. 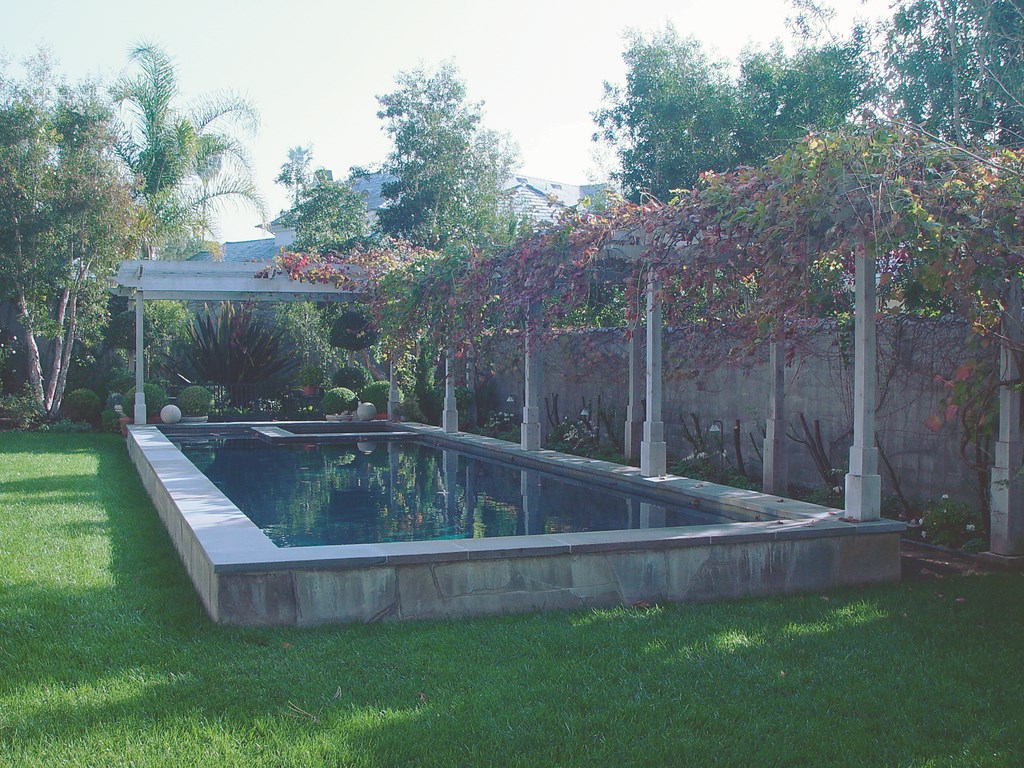 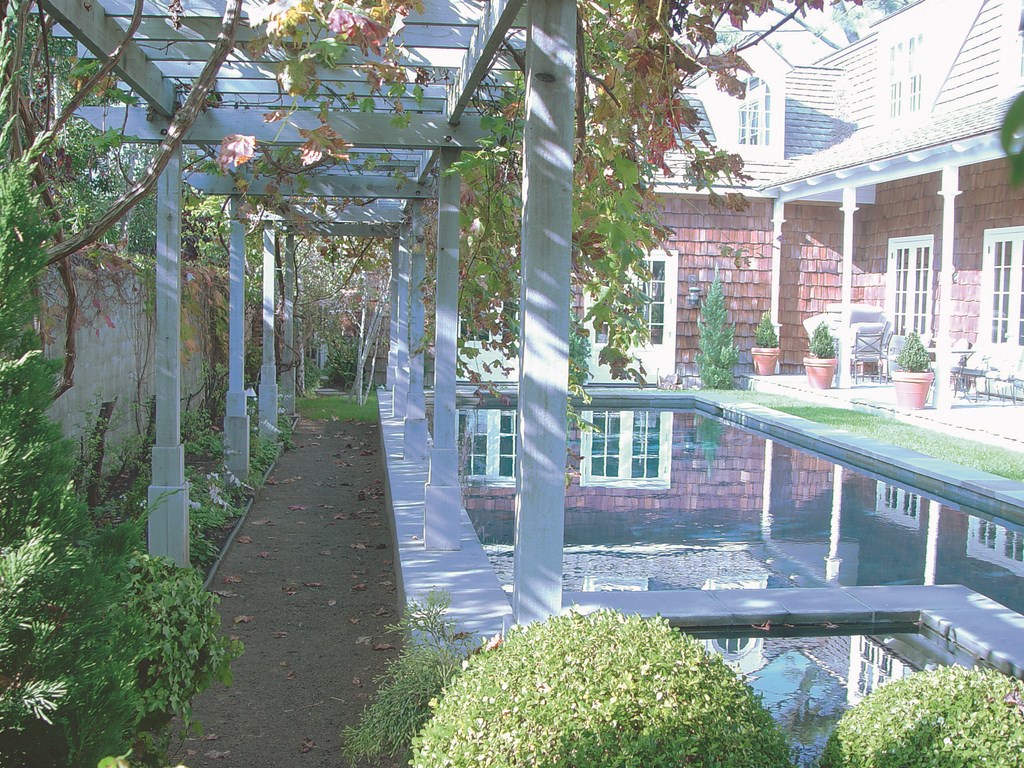 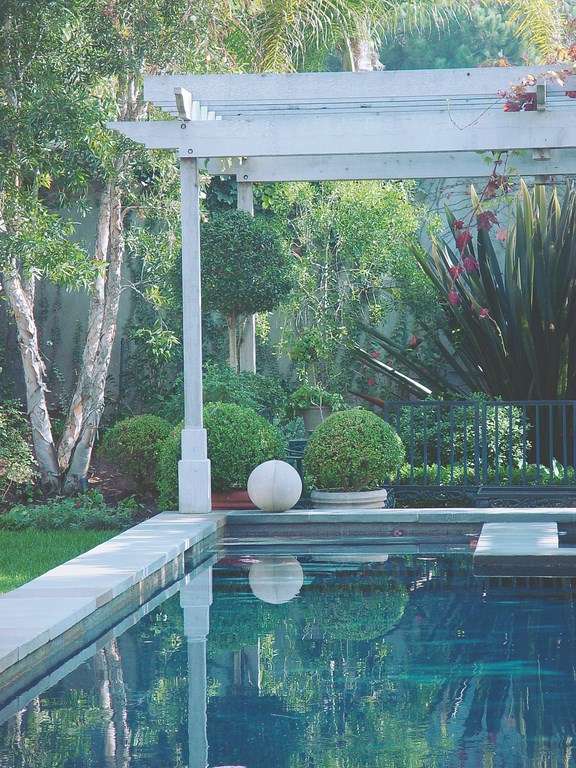 The arbor covers much of the pool, which means lots of leaves and debris. We expressed our concern about this to Pries, but she saw a fair tradeoff between beauty and maintenance challenges and left it to us to develop a circulation system and skimmer locations that would accommodate the plantings. As designed and executed, the arbor is indeed a unique and eye-catching touch – one that gives the pool its personality.

The grape leaves winding up the pillars and hanging down through the overhead slats soften the stiff lines and offer a tranquilizing green contrast to the overall impression of the rectilinear forms. The pale greens and the quiet exterior grays accent the dark-brown shingles of the house – an honest evocation of a New England beach house.

We were delighted when Pries contacted us about a second project, this one high atop a hill in Newport Coast about two miles inland from the beach. The steep rise of the topography lifts the area above much of the ocean mist and into a much drier and warmer microclimate – an atmosphere reminiscent of a semi-arid Mediterranean coastline and one that gave her the opportunity to change genres and move in an entirely different design direction.

This time around, thoughts of fog-shrouded beach houses were replaced by those of Tuscan-style villas. From the yellow stucco walls and the heavy, rough wooden doors and shutters to the soft, decomposed-granite pathways that wind through the gardens, this home gives you the feeling that you’ve traveled to a different place and time.

Among the most spectacular features here are the first floor’s open-arched patios, which provide transitions from the home’s antique-laden interior to the surrounding garden spaces. An open-air atrium – outfitted with thick cotton drapes instead of doors and filled with weathered wicker furniture – opens onto a terraced swimming pool deck surrounded by roses, a variety of shrubs and olive and pepper trees. 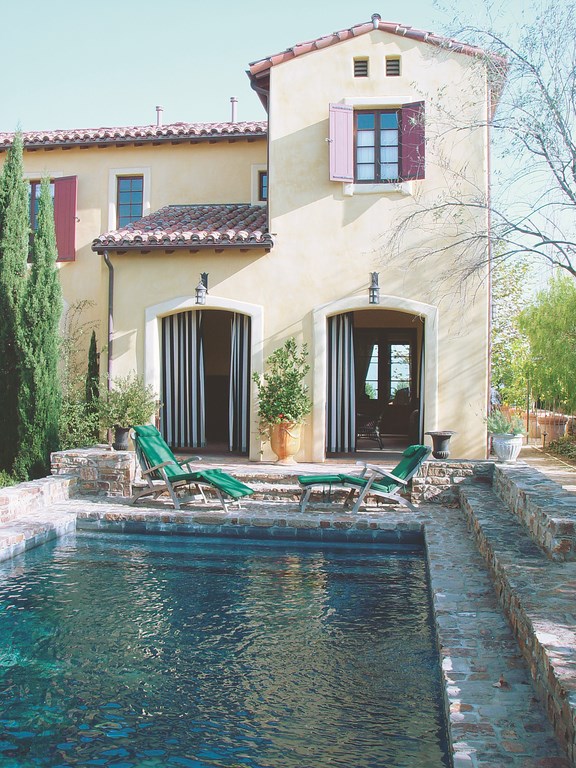 Once again, Pries chose a simple rectilinear shape for her pool. This kept the watershape itself from becoming too complex, but she allowed for variations in deck levels that we exploited to develop visual interest and create a range of defined viewpoints. The spa is attached to the pool only by a wide bond beam and equalizer lines, yet the subtle rise from the wide pool coping as you step up to the wide spa coping creates the illusion that the bodies of water are on one level and connected.

This illusion is intensified by the “bottomless pool” effect created by a deep gray plaster. In contrast to the way the plaster on Cape Cod-style project seemed to make the pool disappear beneath the arbor and upon the green lawn, the darkness of this pool captures reflections, suggests timelessness, and serves more distinctly as a focal point.

Once again, material selections were critical drivers of the design. Pries had discovered a rock material called Ortega Stone, a chunky, hard, very uneven material with rough-hewn edges and crusty lines that give the deck and the surrounding low wall a rustic, aged look much akin to the ancient walls of stacked stone found throughout Italy. The decomposed granite surrounding the pool intensified this sense of stepping into a time warp.

Because of its rough texture, the stone was not the most functional choice for decking and coping material. Again, we discussed this concern with Pries and proceeded with great care to make certain the stone coping was level, smooth, and fulfilled all the structural requirements of any other coping material. (We also discussed her choice of trees without persuading her otherwise, despite the fact that olive and pepper trees are about as messy as any species on the planet.)

Midnight Black slate was chosen for the waterline tile, enhancing the reflections of the dark pool water but making for somewhat tricky installation in that the large slate pieces had to be placed perfectly under the irregular stone coping to maintain a straight and consistent waterline perimeter. What we achieved is an invisible tile line that leaves only water reflections beneath a naturally textured cantilever.

The most challenging moments of a project are quite often unforeseen at the beginning, and that was the case in this Tuscan-flavored collaboration.

As part of her work, Pries collects a variety of items in Europe that she incorporates into her décor and construction. One such item was an antique water-pump head she’d found at a small farm in France. The pump head was quite old and interesting, and it seemed natural to place it in a visually dominant location. 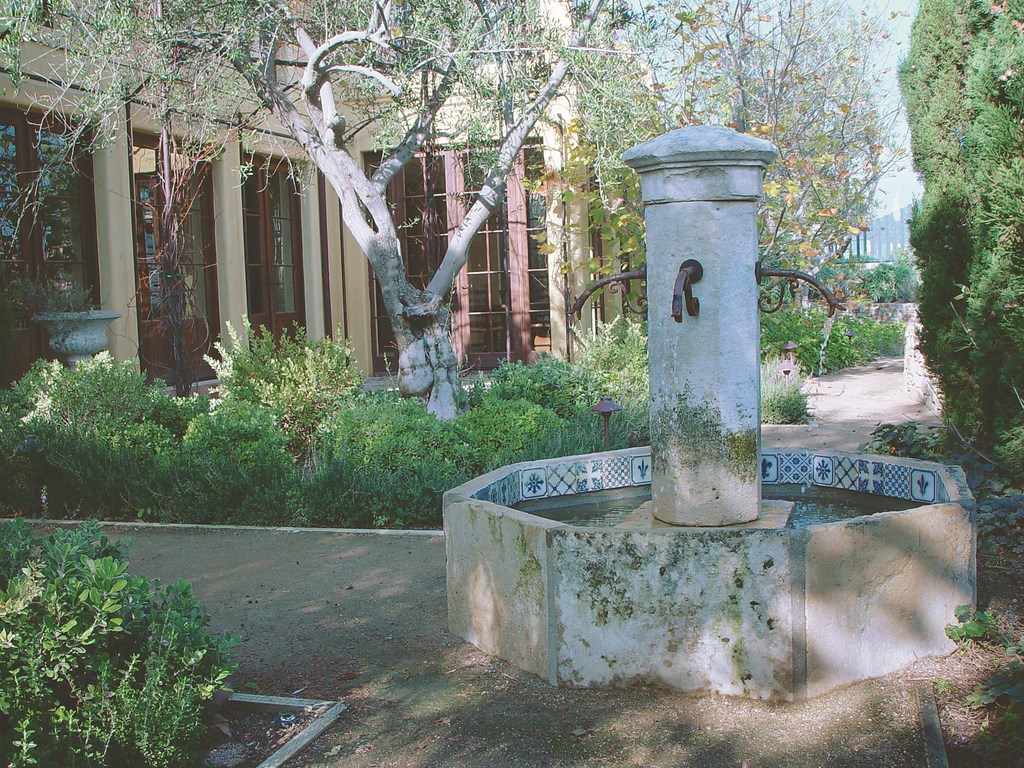 After a bit of discussion, we built a square, unadorned block structure at the center of the view from the atrium arches at the far end of the pool to support the pump head. That was no challenge, but the spout itself offered its share.

As it turns out, the pump head had been constructed with a lead-containing alloy at a time long before medical science (and code writers) knew about the negative effects of certain metals in water. Our desire was to preserve the antique finish and appearance of the pump-head-turned-fountain while allowing it to function safely as a cascade into a swimming pool.

It took some time, but we eventually found an epoxy sealant that we used to coat the inside of the pipes. It was void of any color or texture that would interfere with appearance of the historic piece.

The project featured two additional small fountains, one in a courtyard garden on the opposite side of the house from the swimming pool, the other a small wall fountain on one of the upstairs balconies. In each case, antique fixtures and materials were used, accenting extremely small flows of water that added subtle spice to the overall composition. 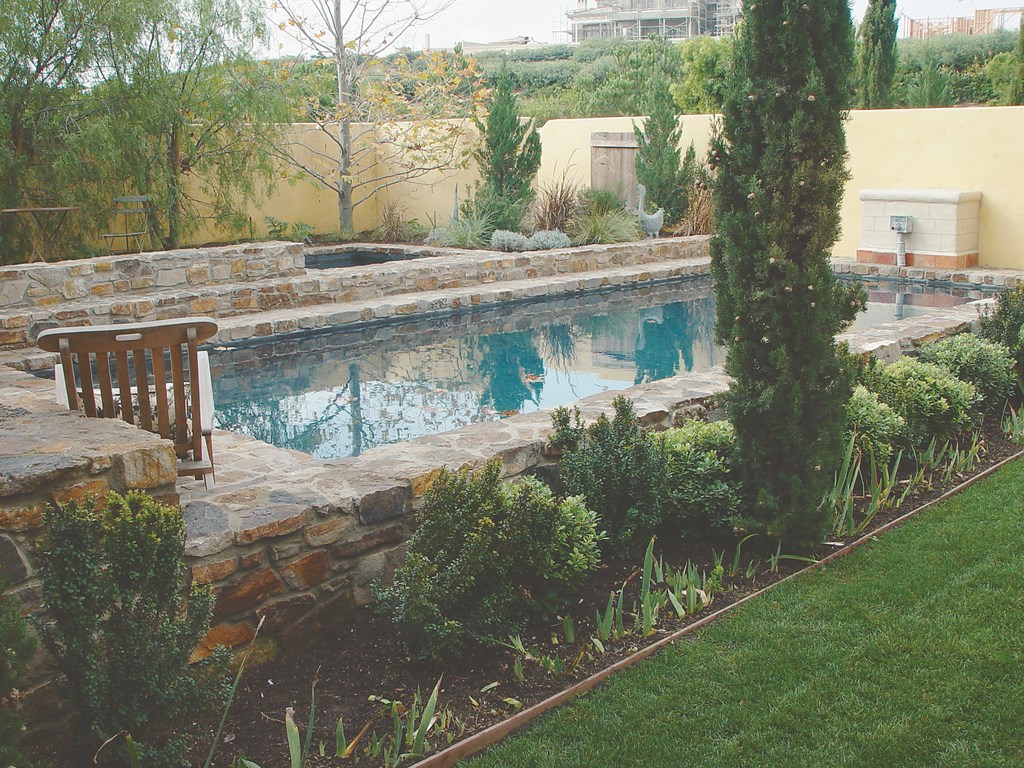 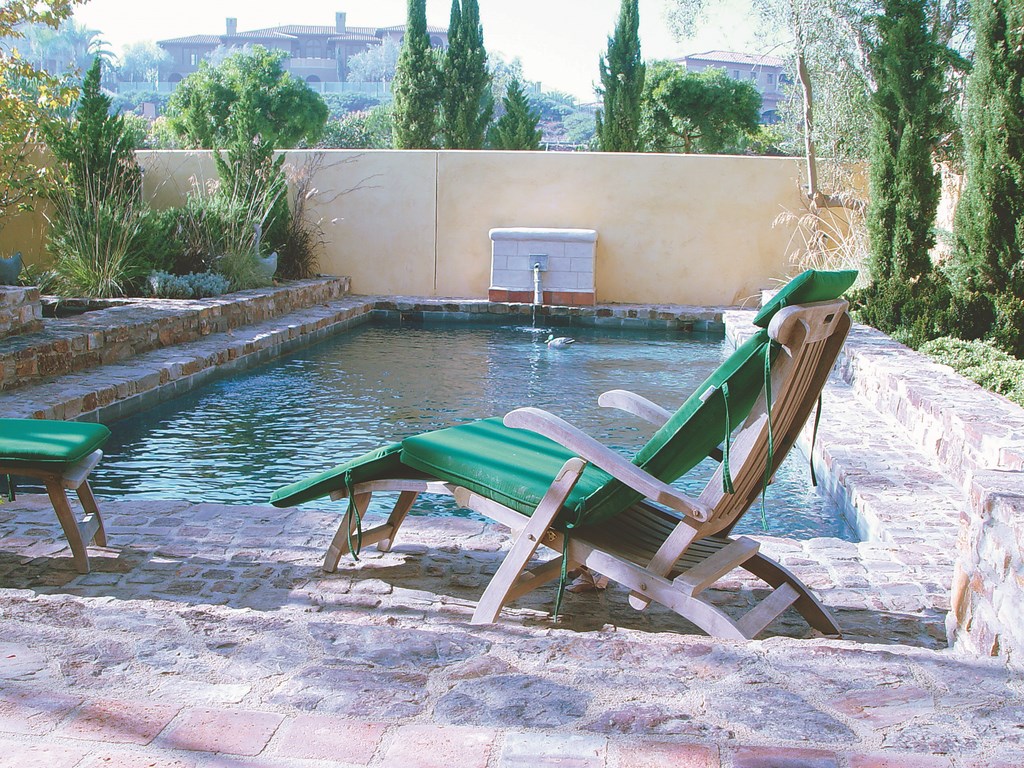 As completed, the simple, rectangular pool is retiring, yet elegant. The bright sun forces the shadows of the sparse, twisted trees onto the dusty granite walkways and still water, while the rough stone and rustic pump head provide the illusion that you’re in a place that’s grown beautiful over a great span of time.

The joy of these projects for us is that we were involved from the start and were able to offer technical support and construction skill that furthered the design and execution of these watershapes and their surroundings. The pools themselves are simple, but with changes in elevations, through contrasting and complementary textures, with subtle colors and contrasts, and through the encompassing of architectural styles and art pieces that evoke other times and places, the environments are rich with meaning and fully express the architect’s special vision.

Water is an integral tool in such evocations – universal, timeless and vital. When you work with such a talented designer in such exquisite settings, the efforts of the watershaper can seamlessly fuse with the surroundings and bring a quality and character to a project that is both unique and inspiring.

Randy and Martha Beard own Pure Water Pools, a construction/service firm in Costa Mesa, Calif. They met in 1981 while both were working behind the scenes in the entertainment unit at Knott’s Berry Farm. At the time, Randy also had a small pool-service business and convinced Martha (Marti) to invest in expanding the route. They purchased Pure Water Pools from another technician and have operated in the Costa Mesa/Newport Beach area ever since. As the route grew, both dropped their other jobs and focused entirely on the pool business as small repairs led to big repairs, big repairs to remodels, and remodels to new construction. Each year, they’ve seen their projects become more creative and technically challenging. Today, the firm works with many of the area’s leading architects and landscape architects to create a range of custom watershapes for upscale commercial and residential clients.