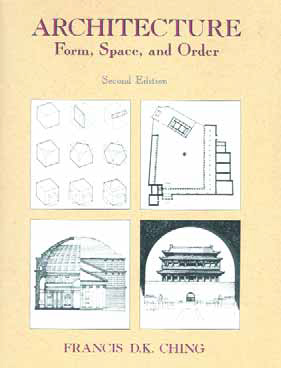 A paperback edition of Francis D.K. Ching’s book, Architecture: Forms, Space and Order, had been sitting on my desk for less than a day when my colleague and friend Mark Webb spotted it and became pretty animated.

He started talking about the book in a way that made it seem it was a given that we both should be completely familiar with it. I had, in fact, just picked up my copy at a used bookstore without ever having heard of Ching or knowing anything about his highly influential body of work.

I soon learned that Webb and many other architecture and landscape architecture students (beyond yours truly) read Ching’s work early on in their studies. Feeling as though I’d missed out on something important in my education, I dove into the text and soon came to understand why my friend saw such significance in Ching’s approach to teaching architecture.

The text I bought is a revised second edition published in 1996 by Van Nostrand Reinhold. It’s one of several textbooks by Ching, a professor in the Department of Architecture at the University of Washington. Other titles include Architectural Graphics, A Visual Dictionary of Architecture, Interior Design Illustrated and Building Construction Illustrated, among several others. Most are in their second or third printings and have been translated into a range of languages.

I was fortunate that the book I had stumbled onto is something of a touchstone for accessing and understanding Ching’s system of communicating about architecture and design. The 400-page text consists of his graphic illustrations and his thoughtful, expansive descriptions of basic architectural terms and concepts.

He starts at the beginning with a discussion of the concept of a point, then moves on to cover a line, a plane, a three-dimensional space, volume and so on. Each concept builds upon a sensible foundation as he develops what he calls a visual and verbal vocabulary of architecture.

He also explains his view that all architecture is about mathematics and problem solving and argues that, while most of them share an innate ability to understand spatial relationships, designers lack a set of specific terms and concepts that allow them to exploit those relationships as creatively as possible.

He then sets out to fill that gap, offering detailed explanations of specific applications in which fundamental mathematic principles are used to solve problems presented by the conditions of the environment and the nature of the structure being created.

Along the way, he covers in logical detail the mathematic principles behind everything from Greek, Roman and Renaissance architecture to the major forms of modernism. He covers in depth, for example, the concept of “The Golden Section,” a principle of the ancient Greek worldview that relates all physical forms in both architecture and nature to the ratios and dimensions found in the human body.

He explains and illustrates how the Parthenon of Athens was constructed using this defining principle, then moves on to offer similar illustrations and analyses of structures across the eras and careers of the masters using a variety of other mathematical principles and formulas. In addition, there are careful explanations and illustrations of the mathematics of scale, volume, line and proportion and of how these elements cut across all styles and modalities.

His treatment of these ideas is so clear and concise that I came away feeling that I had gained a whole new set of terms and concepts with which to comprehend and communicate about the essence of physical design – not the sort of mind-expanding experience you have every day.

To be sure, Ching deals mostly with buildings – but as a landscape architect and watershaper, I appreciated the importance of the principles and concepts he so deftly explores as well as the variety of approaches he uses to clarify his meaning. This book will now be a permanent fixture on my desk, where I suspect it’ll soon be joined by other books by Francis D.K. Ching.