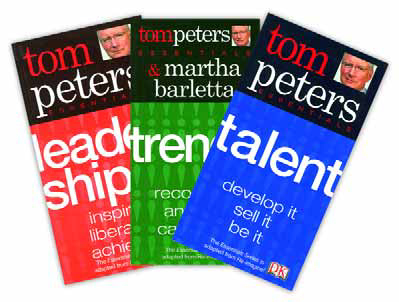 If you’ve yet to read any of the works of business guru Tom Peters, you’re in for a real treat.

A few years ago Peters wrote Re-Imagine, a book that established his reputation as a leader in the field of business philosophy and education. Last year, he released a trilogy of new books that expand on the themes and discussions that have made him both well known and hugely respected.

Beginning with “Trends,” which I think is the most interesting of the three books, Peters covers two major movements that resonate with what we’re seeing in the watershaping business these days.

First, he points out that women are becoming an ever more important factor in today’s economy, and the past few years have seen the meteoric rise of women who have started their own successful businesses. This trend dovetails with a sub-trend he describes in which major purchasing decisions are mostly being made by women. Indeed, experts who track such things tell us that women now make somewhere between 80 and 95 percent of the key decisions.

(This observation lines up completely with my own experience: These days with a large percentage of my projects, I don’t even talk to the husband and deal exclusively with the wife.)

Peters goes on to describe a second key trend having to do with the role of aging Baby Boomers in today’s marketplace. The generation currently approaching or entering retirement age does not want to go gently into its golden years, he says. Instead, they’re interested in traveling, staying healthy and spending their money on exciting lifestyles at home and away from home.

(Again in my own experience, I’ve designed and built more swimming pools for people more than 70 years of age in the past two years than in my entire career before then. I find what Peters says about addressing the needs of these consumers to be right on the mark.)

What all this means, I think, is that we need to reconsider the way we approach and treat our clients in just the way Peters recommends in the other two books. In “Talent,” for example, he writes at length about the need to press forward and try new things in business and develop skills within an organization that favor innovation. A great coiner of phrases, Peters advises that we need to change because in today’s world, you’re either going to be “distinct or extinct.”

In “Leadership,” he argues for increasing the training we give ourselves and our employees, pointing to statistics revealing that average workers in the United States spend just 26.3 hours on average in a classroom setting each year. He argues urgently for seeing education as the pathway to creative thinking and says that all industries in today’s world must not only accept change as a market condition, but also must seek to advance change.

He also says that we should honor the rebels and fully embrace the changes they represent. We should be aware as well that we must strive for excellence with our products because consumers typically want something that is either cheap or something exciting and special – the casualty being products and services that shoot for the middle ground. For those who are caught up in the status quo he says, “If it’s not broken, break it!”

Peters’ discussions are inspiring, entertaining and remarkably, uniformly relevant to conditions I see facing the watershaping business these days – great stuff for anyone looking to take stock and plan for the future.