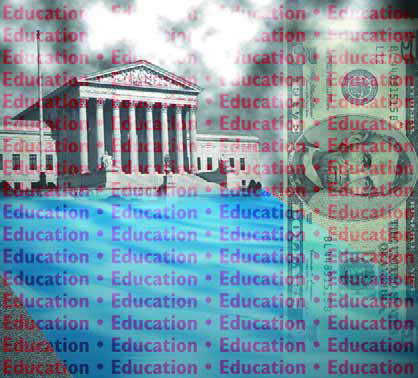 One of my least favorite activities is testifying as an expert witness in legal disputes over watershaping projects gone awry.

As a rule, I try to stay out of courtrooms for any reason, but from time to time, I reluctantly agree to offer my opinion as a witness if I think I can help generate a fair outcome. Despite my best intentions, however, I seldom see it as time well spent.

The process is often stressful, and I know deep down, regardless of who’s right and who’s wrong, that lawsuits are bad for business: They leave consumers feeling cheated, while they force too many contractors to spend valuable time and hard-earned money defending their work or suing for payment.

Through my experiences as an expert witness in various cases over the years, I’ve come to believe that most of the time, regardless of outcome, everyone loses – except, of course, the attorneys, who more often than not seem motivated by a desire to drive up fees by intensifying a conflict.

From our perspective as watershapers, the only way to avoid legal entanglements is to strive for quality in our work and professionalism in our demeanor.

Given the number of lawsuits you hear about, that’s apparently much easier said than done – despite the fact that those who choose not to strive for and achieve excellence sooner or later find themselves climbing out of the saucepan of poor performance only to fall into the flames of the legal bar and grill.

I don’t mean to say every legal battle is the fault of the watershaper, but more often than not what I see is the consequence of a contractor’s having taken on a project that was simply beyond his or her reach.

Today’s watershapes are much more involved and complicated than those of the 1950s and ’60s and ’70s, when simplicity was usually the order of the day. In those days, it really was true that just about anyone with basic construction knowledge could build kidney-shaped swimming pools. In today’s market, however, the stakes are often far higher.

And now I hear it all the time: “We’ve had a pool built,” says the aggrieved homeowner, “and there are lots of problems.” Sometimes I get these calls as the lawsuit is being filed, but more often they come at an early stage – a point at which homeowners are seeking information and are simply looking for the fastest ways out of bad situations.

It’s in these early-stage cases that I am quickest to get involved, basically because these are the situations in which I feel my involvement will do the most good for watershapers in general.

It’s an obvious point that the sooner a conflict is resolved, the less damaging it is to all parties concerned. And nurturing positive word of mouth about our pools, fountains, ponds, streams and spas is far too important to all of us, I feel, for me not to get involved when I see any potential for a positive outcome.

Far too often, I’m confronted with and appalled by the lack of professionalism and know-how displayed by some watershapers – projects so poorly engineered or executed that I can only wonder why the designer or installer didn’t do his or her homework and learn how to do the job right in the first place.

I say this knowing for a fact that the investment made in education would be much less than the cost in dollars and stress of correcting a botched project. To illustrate, let’s take a look at a job in which the contractor didn’t even followed the details shown on the plans.

It was a vanishing-edge project, and the engineer had done everything right. (In fact, the engineer was someone I knew who was using details that I had developed for some of my own projects, so I was familiar with the particulars.) It was obvious that the contractor had chosen to ignore the plans – or simply didn’t know how to read them. The result was, in a word, disastrous.

We’re talking really bad: The collection trough below the edge, for example, wasn’t wide enough, so some of the water flowing over the vanishing edge overshot the trough completely, killing the landscaping, threatening to undermine the pool over time and causing dramatic water losses. This water-consumption concern was exaggerated by the fact that an auto-fill device, specified in the plans, had been omitted.

What’s more, the skimmer had been installed in the trough – not in the pool itself, as had been indicated in the design. There was also no filtration on the edge system; more than anything else, the fact that the circulation system was blowing dirty water into the pool aggravated the clients.

The plans had also called for installation of a sensor and relay that would activate the vanishing-edge pump if anyone entered the water when the system was off – a step meant to keep the trough from overflowing with displaced water. The builder had also neglected to install a Hartford loop in the return on the vanishing edge, another safety factor intended to keep the trough from flooding.

At every step, just about everything possible had been done to ensure the project’s failure. I’m happy to report, however, that the contractor was willing to correct this long list of errors and omissions – and in so doing spent far more in rectifying the situation than would have been required to learn how to do the job right.

These things don’t always resolve themselves so happily.

Quite recently, I heard from two different homeowners who live within two blocks of each other in an exclusive island community in South Florida. They had different contractors, and both were unhappy with their vanishing-edge pools.

I won’t go through the laundry list of maladies these projects presented; suffice it to say that the work in both cases failed to come anywhere close to meeting anyone’s concept of “minimum standards.” Pre-attorney negotiations on these jobs are still ongoing and nobody involved wants to go to court. I can only hope the contractors in these cases step up to their responsibilities.

The point I want to make with these three stories is this: Things never should have gotten this far, and it’s clear that the problems occurred because the contractors had little idea of what was involved in installing a basic vanishing-edge system – even with a clear set of plans as a guide.

This is particularly disturbing because the resources for a basic education on vanishing-edge pools exist from a variety of sources. I’m left to wonder: Why would anyone would agree to install such a job without knowing how to execute the design or taking the steps required to learn how? Frankly, it saddens me to be part of an industry that includes people who would operate that way.

In all fairness, I’m also perfectly aware that it’s not always the contractor’s fault. I’ve been brought into cases where jobs have been improperly engineered by consultants who should have known better. I once saw a plan specified by a hydraulic engineer that called for a three-horsepower pump on a single two-inch suction line – pretty scary when even a basic knowledge of hydraulics tells you the pump is way too big.

This is why it’s important for designers and contractors to get educated: When you can’t even rely on something designed by an engineer, you’re left to your own resources and must take care of yourself and your own interests as well as those of clients who’ve hired you because they trust you. Especially if you’re going to reach beyond the ordinary and take on projects with vanishing edges, fountains, waterwalls, elaborate spillways and other details much in demand these days, you owe it to yourself and your clients to find out how to do the work!

This isn’t the first time I’ve written about the value of education, and you can be certain it won’t be the last time.

Just as I’m sometimes amazed when I see how wrong things can go in local backyards, I’m also amazed when I see watershapers spending so much of their money on advertising and promotions while investing not at all in educating themselves and their staffs in how things should be done.

As mentioned up front, we’re not designing and building the simple vessels of the ’50s, ’60s or ’70s. It’s no longer true that just about anyone with basic construction knowledge can build a modern, full-featured swimming pool.

What these under-informed contractors are really promoting is a false image of professionalism – a sham that makes consumers think they’re about to experience true excellence when in fact what they’re getting is someone who inevitably degrades the product with substandard performance. To these contractors I say: Pull the ads and spend the money on making your clients happy – and see if this new strategy doesn’t multiply your success.

If you’re wondering if this discussion applies to you, I offer this challenge: Conduct a survey among all the clients you’ve worked for and ask them how they would rate their overall experience with you and how they feel about the watershape you installed. That’s a tough test, and if you come up short, I’d strongly suggest investing in your success through education before it’s too late.

There is, of course, no guarantee that education will keep you out of court altogether, because the unfortunate fact is that being in business almost always means you’ll end up ensnared in the legal system at some point. That’s just the way our society works. But if you are informed and know what you’re doing and it shows in your work, it’ll be much easier to find expert witnesses who will help you defend yourself.

The alternative – taking on projects without enough knowledge to make them happen the right way – means you’ll probably be sued so many times you’ll wind up out of business, having degraded the watershaping industry in the process. Worse, from my perspective, is this simple fact: You won’t have any fun along the way.

So choose to invest in education, or burn your resources and your career in needless conflict and litigation. It’s a decision only you can make.