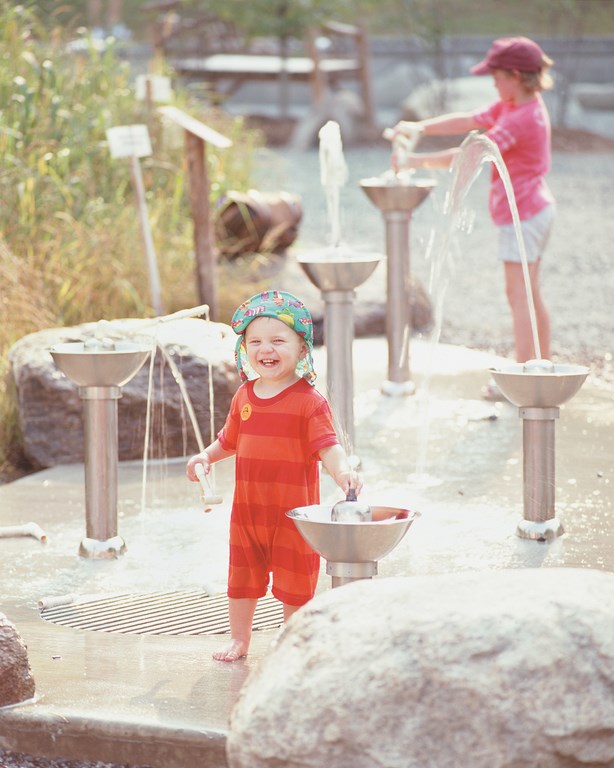 Teaching children about the science associated with the natural elements of earth, air, light and water in an imaginative, fun and engaging way is one of the key missions of modern museums of science. Conveying those concepts through a landscape, however, is a unique and ambitious goal – one we suggested to the directors of Montshire Museum of Science of Norwich, Vt., as a way of transforming the museum’s grounds from ordinary exhibit space into a true laboratory for learning.

During all of the early discussions of types of natural phenomena Montshire wanted us to explore, museum representatives always seemed most excited about those associated with water. They agreed with us that water exhibits could teach children about wonders as diverse as stream erosion and deposition, the reflection and absorption of light, how the pattern of water currents and flow velocities are affected by the size and shape of the water’s container, how the pressure of water increases as its depth increases, and how the air temperature cools as one comes closer to water.

Opened to the public in July 2002, the resulting watershapes all serve to demonstrate processes that shape the natural world and are, we believe, unique in the way they serve as a physical and conceptual transition to the verdant grounds and nature trails that await visitors who venture beyond the museum’s formal bounds.

For many years, children, their parents and a variety of school groups have flocked to the museum to learn about science – particularly ecology and other natural sciences – through the facility’s collection of engaging, hands-on exhibits. It’s the perfect setting: Located on 110 acres, the facility sits in a long, narrow valley at the foot of a steep mountain near the west bank of the Connecticut River. 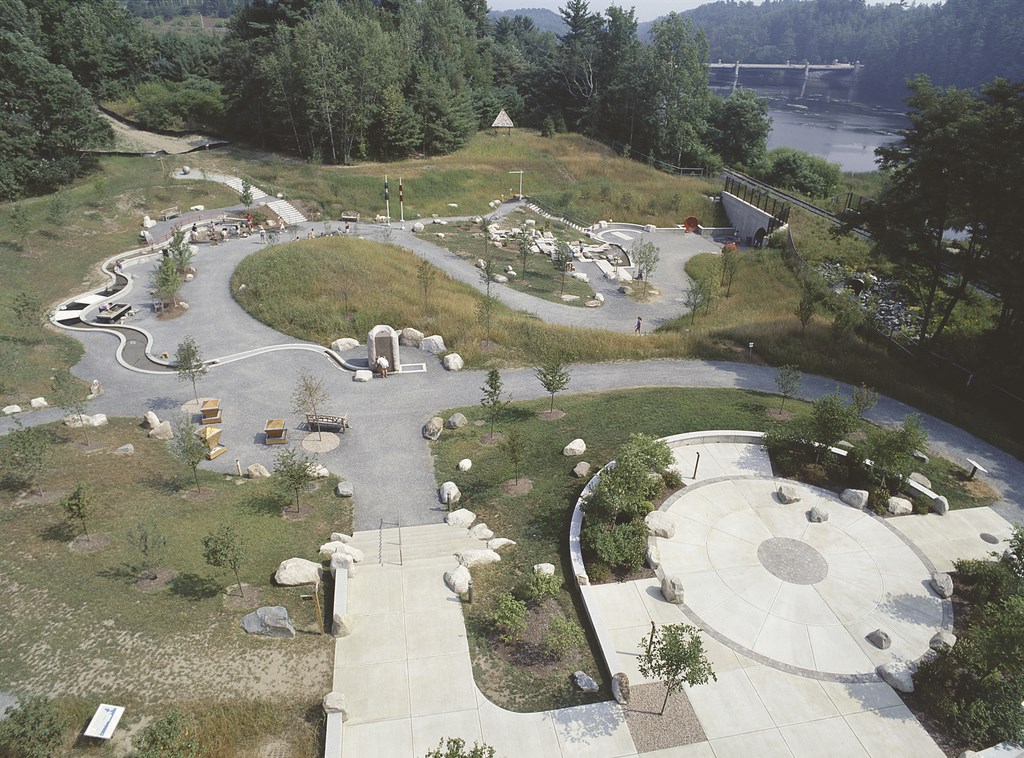 The beautiful landscape was formed, as is the case for the topography of much of New England, by receding glaciers that dredged great valleys between ridges of bedrock along a north/south axis. The museum takes advantage of its environment by focusing many of its special exhibits on local geology, hydrology, flora and fauna.

Montshire, as it is commonly known, recently expanded to include a building that serves as a National Fish & Wildlife Visitor Center. The center specializes in exhibits having to do with the Connecticut River watershed. The most recent phase of the museum’s growth has focused on the grounds surrounding the buildings – a space now known as Science Park.

As is described in detail in the sidebar just below, Science Park was conceived in part as a way to manage a spatial and educational transition between the museum’s existing interior spaces and a system of nature trails that had been set up on the banks of the Connecticut River.

The list of lessons the museum wanted to convey in that transitional space was ambitious, including not only water but also light, air and earth. In a couple of cases, the need for exhibits was met with pre-packaged displays brought in from outside. In others, exhibits were to be planned and built by the museum or by local artisans. We at Copley Wolff Design Group worked with all of the exhibit designers then on board, coming to understand each exhibit’s lesson as well as its overall spatial needs as we developed the overall landscape plan.

We quickly noticed that many of the pre-fabricated exhibits were of similar size, about ten feet wide, deep and high. While placing these smallish exhibits in thematic groups might work indoors, we knew that this approach would not translate so successfully to the great outdoors.

Our challenge was to organize the overall landscape to accommodate the exhibits in a way that would be clearly understood and enjoyed by its visitors. To accomplish this, we knew that Science Park needed to incorporate larger, landscape-scaled exhibits – spaces set up on very different scales from the museum’s familiar ten-by-ten-by-ten cubes. These larger exhibits needed not only to structure the space but also to tell Science Park’s story, thereby lending a meaningful cohesiveness to the visitor’s experience.

Balancing all of those needs took time and a great deal of discussion. Ultimately, we used watershapes to organize the space, provide structure to the experience and convey the overall themes the museum and its design team wanted to communicate.

We decided to use the journey of a drop of water as it flows downhill and gains momentum as a metaphor to guide the design of Science Park’s water system.

The facility’s remade topography provided plenty of elevation change and the opportunity to build large displays along the waterway. The water starts at the Headwater Stone, an eight-foot-tall by five-foot-wide by-five-foot-deep piece of rose-colored granite placed directly across from the steps leading to the terrace. With water welling up as if from a mountain spring, a thin sheet emanates from the top of the stone and softly spills down its polished face. 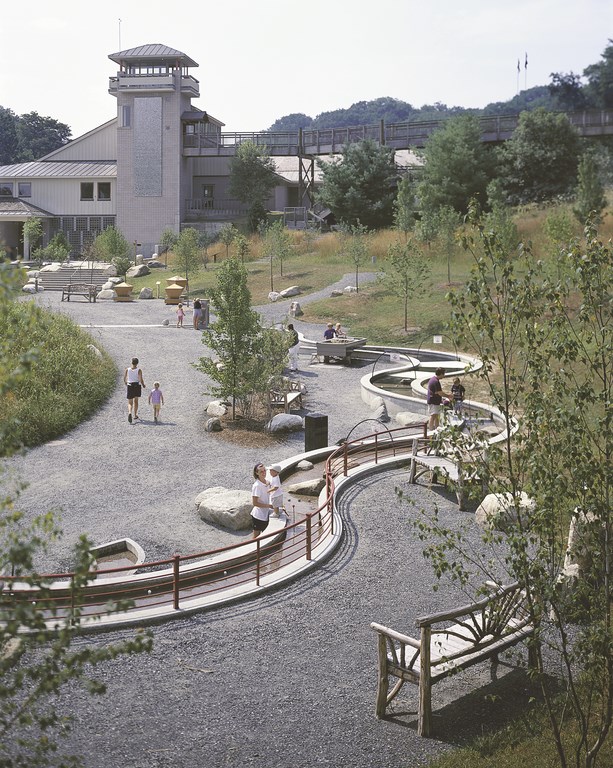 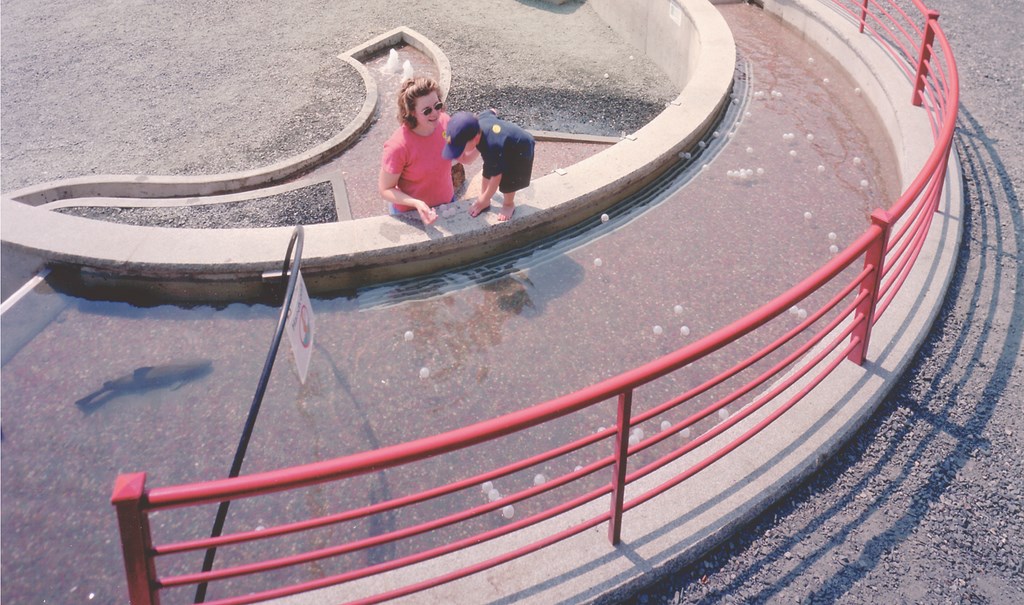 A poem by Leonardo da Vinci is inscribed in the face of the Headwater Stone. It describes the changing qualities that water assumes as it travels through different places – an appropriate prologue to the displays that visitors are about to experience. The water spills from the Headwater Stone into the 200-foot long Rill, a watercourse in which the flow picks up momentum and power before culminating in the Granite Cascade, just opposite the mouth of the tunnel. 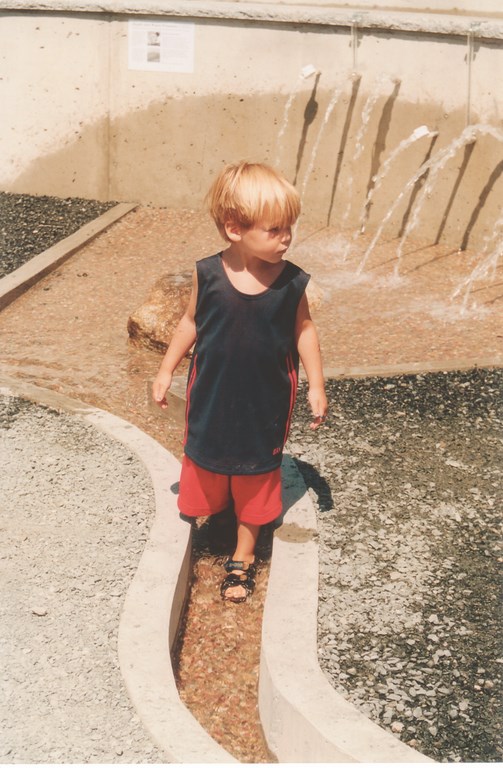 Guests can walk over a covered portion of the Rill, where they hear the sounds of water rushing beneath their feet. When the Rill re-emerges, it widens and then constricts in a series of curves. Several exhibits have been set up along this waterway: For starters, by dropping a ball at its beginning and following its course, children discover the current patterns created by the Rill’s shape and how the current is affected by dams, holes and rock obstructions. They watch how the ball’s velocity quickens as it speeds through narrow sections, and then slows as the Rill widens.

By damming water in one segment, kids make the water level rise and spill into three pipes that disappear into the Rill’s floor, with the flow then reappearing at their feet. The water from the three bubblers gurgles away in a small six-by-six-inch runnel, where it is joined by water draining from the Pressure & Depth display. This exhibit features nine spouts mounted in the Rill’s walls at three different heights: The pattern in which the water sprays varies according to the height of the hole in the wall, with the lower holes spewing water out farther as a result of the higher pressure of the deeper water.

The watershed metaphor carries through the entire length of the waterway with several more educational stops along the way. 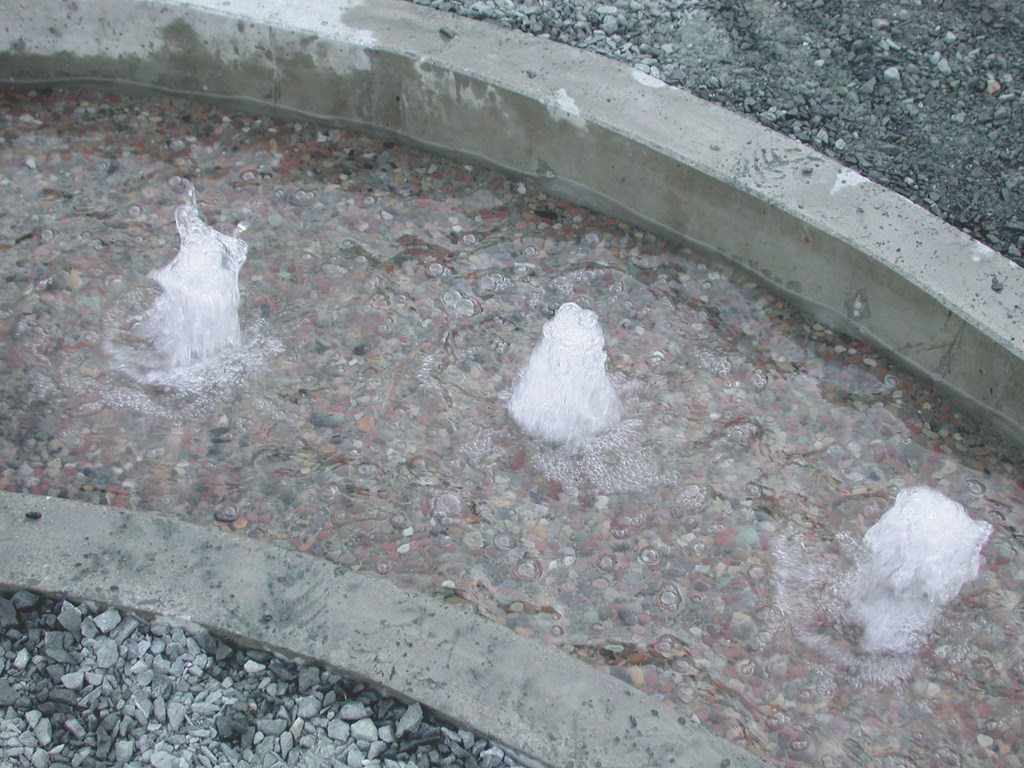 The Rill itself ends at the Eye-Level Waterfall, where water sheets over a smooth, level edge and drops three feet into a basin below. Kids plunge their hands through the glassy sheet to find a dry, polished concrete wall embedded with bronze “fossils.” Here’s where they also reclaim their balls and deposit them in a container.

From the Eye-Level Waterfall, the water momentarily disappears under the path, then pops up again at the Pressure Fountain. 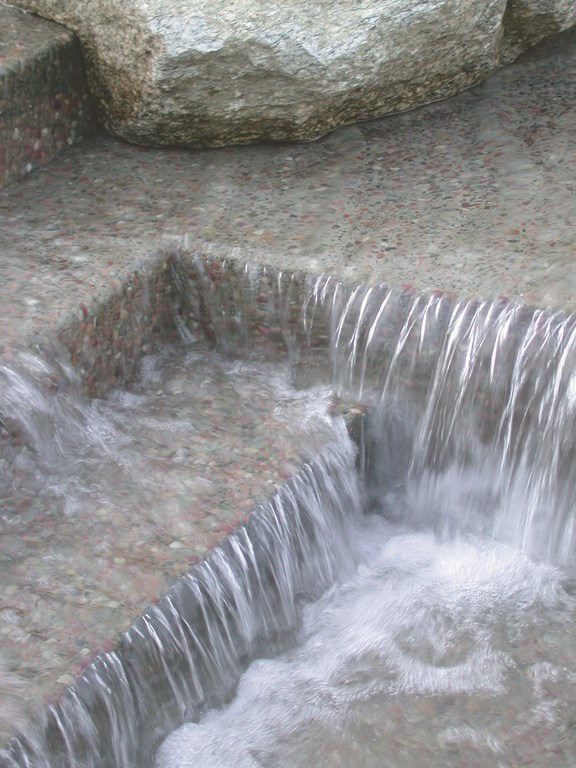 In the park’s “water story,” the Pressure Fountain is an abstraction of a city, representing human intervention in the water drop’s journey to the sea. The exhibit consists of five vertical steel pipes onto which kids can attach PVC plumbing pieces and build outrageous structures that aim the jetting water in various directions. Here, they learn that restricting or stopping the water flow of one or more of the pipes will cause the water to spout higher from the others.

At the top of the display, guests can use moveable dams to divert water into a whirlpool, for example, or to adjust the flow around boulders. At the base of the Granite Cascade, the water collects in a large pool that contains six Water Bells. Standing at the edge of the pool, visitors turn knobs on the granite coping to increase or decrease the volume of water going to the bells, changing their shape from fat and round to skinny and wavering.

Given the museum’s rural setting and its emphasis on education in the natural sciences, we at Copley Wolff Design Group were initially concerned that the museum might want the Science Park’s water displays to be naturalistic and take on the look of the property’s naturally occurring brooks and streams.

This was an aesthetic that we did not want to mimic, because it was our sense that Science Park was a constructed artifact and, as such, shouldn’t be confused with nature or attempt to replicate or compete with it. 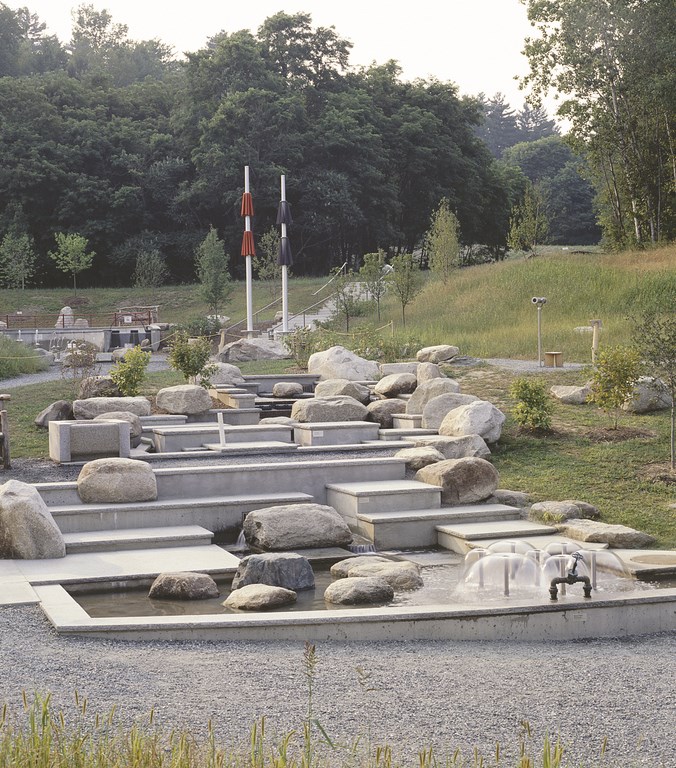 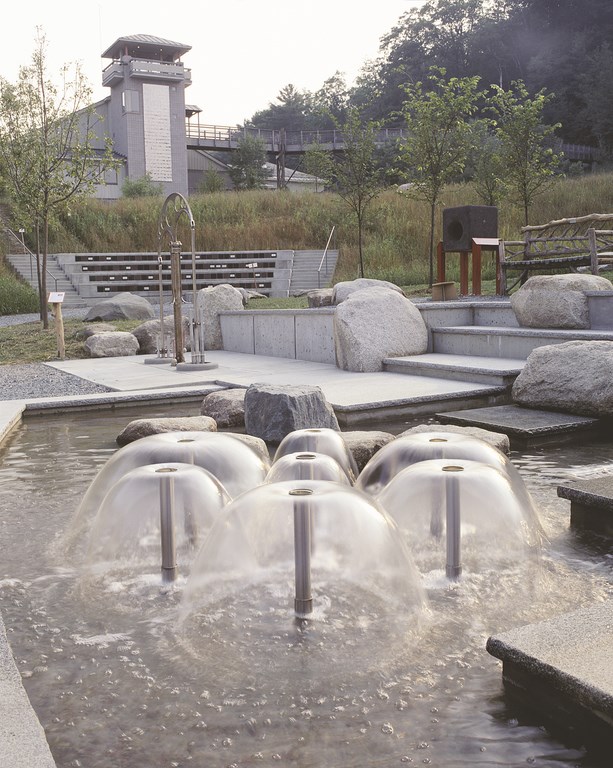 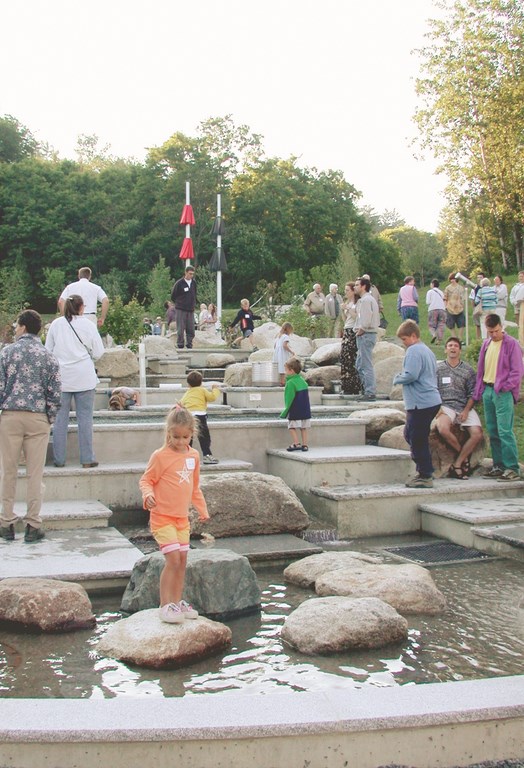 As a result, we advocated making the water structures, shapes and materials as clean and simple as possible and avoided adorning them with fussy, pebbled edges and pockets of plants. Our intent was to make bold sculptural structures that would accentuate the landforms and encourage a clear reading of the exhibits and the scientific principles they were demonstrating. We also intended the spaces and their watershapes to be flexible enough that the museum could seamlessly add new exhibits and alter existing ones. 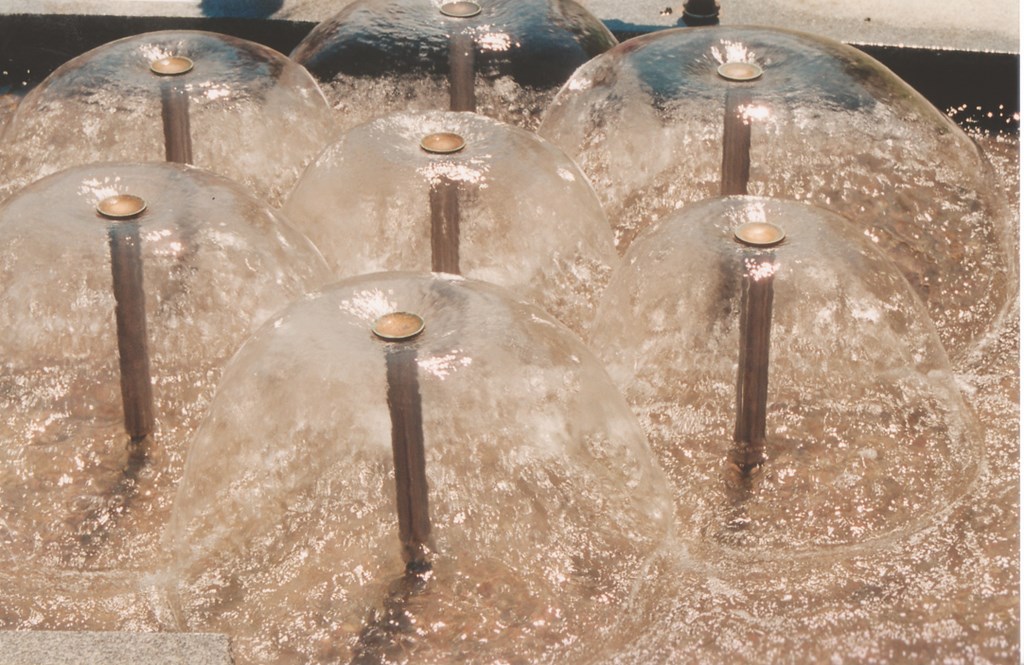 This philosophy led us to use concrete in building not only the water structures, but also the other large structures on site, including an amphitheater for outdoor demonstrations and classes as well as a terrace that transfers visitors from the museum’s interior to Science Park.

No special liners or finishes were used with the concrete structures, but quarried granite caps were mortared to the tops of concrete walls and platforms. Contrasting with the clean, regular lines of the concrete and granite, we distributed more than 150 native boulders throughout the site – some freestanding; others built into or mortared onto the faces of concrete walls.

Through the entire project, we felt that by understanding how natural processes work ourselves, we would be better able to create conditions that reveal the science associated with those processes. For example, the “oxbow” river pattern created by natural processes of erosion and deposition served to inspire the Rill’s sinuous shape. Kids see what this all means in floating balls down the stream, watching as the ball moves from the outside of an upstream curve (scouring earth away) and toward the inside of a downstream curve (depositing the silt).

Of course, given the fact that children are the primary targets of the educational effort, Science Park is much more than a set of lessons in ecology and the natural order.

To be sure, the key is the water-display system at Montshire, from the Headwater Stone to the Rill, down to the Pressure Fountain and Granite Cascade as the waterway weaves back and forth across the path and creates focal points for a child’s experience of Science Park. But this is where the medium- and smaller-size stand-alone exhibits come into play.

These exhibits, including Rock Music, Xylophone Steps, Whisper Tubes, Humming Stones, the Resonant Pendulum and a device known as an Octoscope, let children explore sound, light, and motion and are all artfully integrated into the landscape, making a subtle, yet profound statement about the role these physical principles play in the natural environment.

The result of the playful and colorful placement of exhibits within a sculpted landform, all accentuated by dynamic water displays, is a park that interprets science in a way that one child recently summed up as “Awesome!”