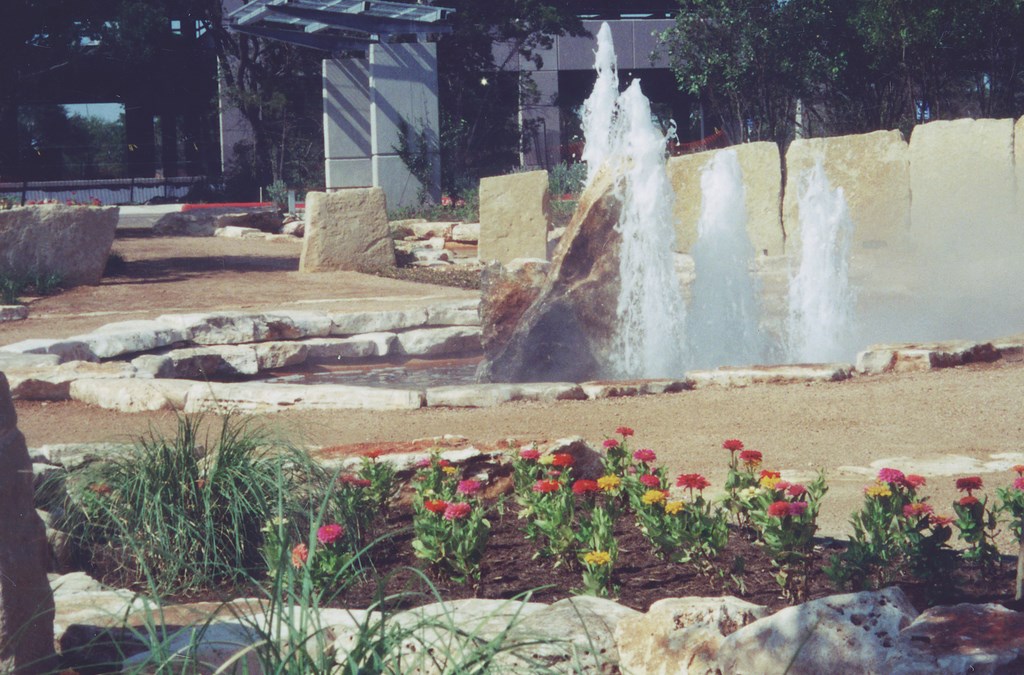 Perhaps the hardest thing for a watershaper to accomplish is to take a set of someone else’s drawings, plans, sections and elevations, roll them all around together and come up with an accurate, three-dimensional, living interpretation of an architect’s vision.

The project shown here is a prime example of what’s involved in this process. Designed by senior landscape architect Patrick Smith of the Austin, Texas, firm of Richardson Verdoorn, the plans called for three separate streams ranging in length from 50 to 80 feet (with each dropping 36 inches over various weirs) – all converging on a rocky central basin in the plaza of an upscale Austin office complex.

In that central basin, an unusual set of water effects and a Stonehenge-like set of ornamental rock specimens (placed dramatically on edge) combine to create a distinctive point of interest at the heart of the property.

For us at Roman Fountains, an Albuquerque, N.M.-based designer and manufacturer of fountain systems, this project offered a unique showcase for our products at the same time as it gave us the opportunity to participate in the creation of something truly special. For all of us, the journey from ink and paper to rocks and streams was a challenging one that required collaboration, cooperation and highly professional execution of critical assignments by all project players.

The project began with the arrival of the rocks – some very large ones at that, including the 2-1/2-ton limestone slabs that form a curvilinear boulder wall as well as an array of other substantial boulders and rocks that would be placed around the site.

All of this stonework was under management of Bill Wilmot of L&R Landscape Services. The firm is the local resource for setting up rock formations that echo landforms indigenous to the Austin area. Wilmot and his staff played the key role in selecting and arranging the material in pursuit of the original design. In fact, it was Wilmot who discovered the massive limestone slabs in the woods outside of Austin.

But this project was not just about huge pieces of stone. Balance and harmony are brought to the overall composition by the water and the way the meandering streams introduce soothing sounds and a variety of visual impressions as they flow toward the plaza’s center.

And once the water reaches that core, the relaxing flow is transformed into a spectacle of sound, sensations and motion through a fog/mist system, a carefully conceived lighting system and special cascade-aerating nozzles that create white, frothy plumes of water rising between the basin’s limestone monoliths.

From the Ground Up

After the streambeds and central collection basin were excavated, the suction sumps and nozzle water stops were roughed into place. Our molded-fiberglass intake sumps (with stainless steel “coin catcher” baskets and brass anti-vortex plates) provided suction points for the system’s hydraulics. 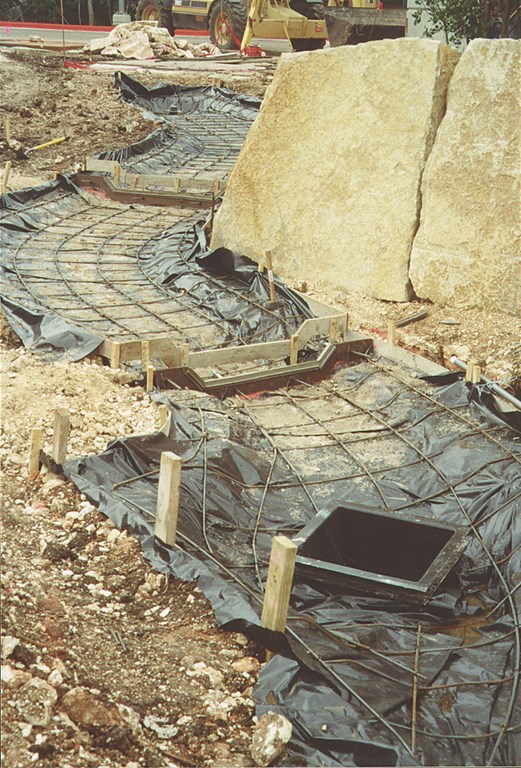 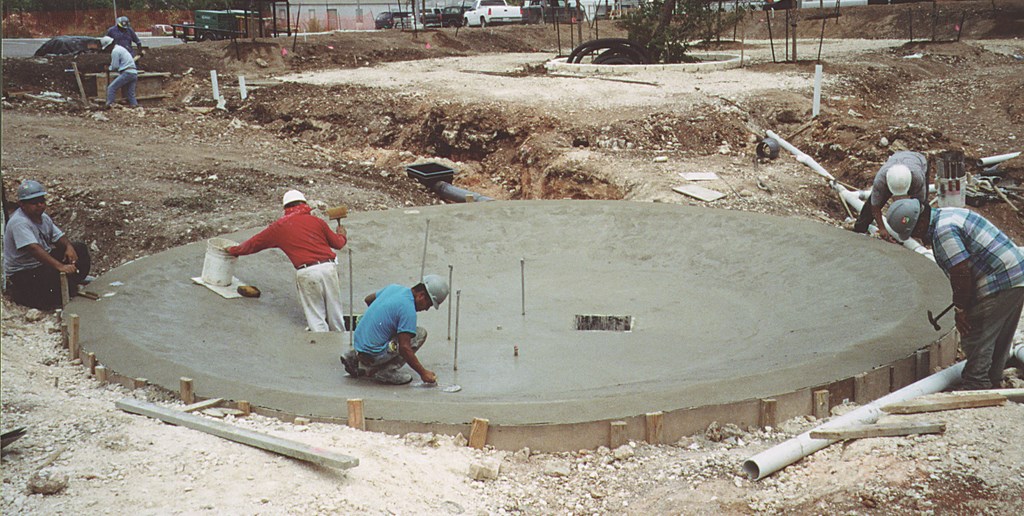 The streams and basin were then fitted with a 45-mil EPDM liner that was in turn covered by a 4-inch thick “road base” of compacted sub-grade material and, finally, a 9-inch-thick, rebar-reinforced concrete shell. (All photos courtesy Bill Wilmot, L&R Landscape Services)

With the central basin in place, Bill Wilmot and the staff at L&R Landscape Services placed the edging stones and mounted the large, upright boulders. The edging for the stream and basin is all buff- and cream-colored limestone. The vertical rock slabs in the center of the basin are Lueeder stone, an exceptionally beautiful and colorful limestone material excavated from a local quarry. 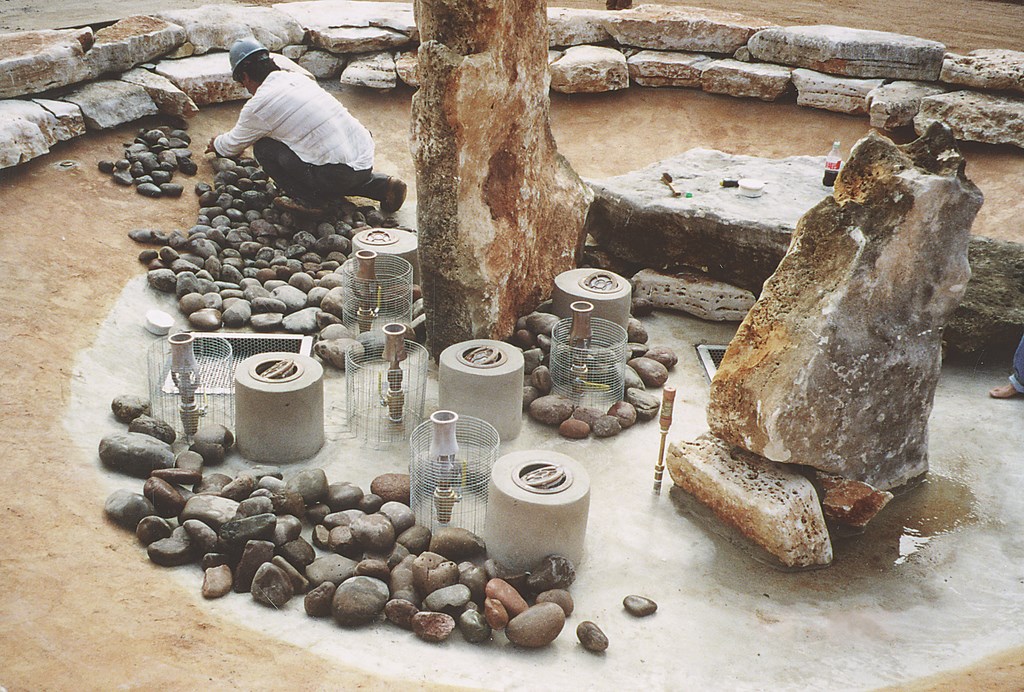 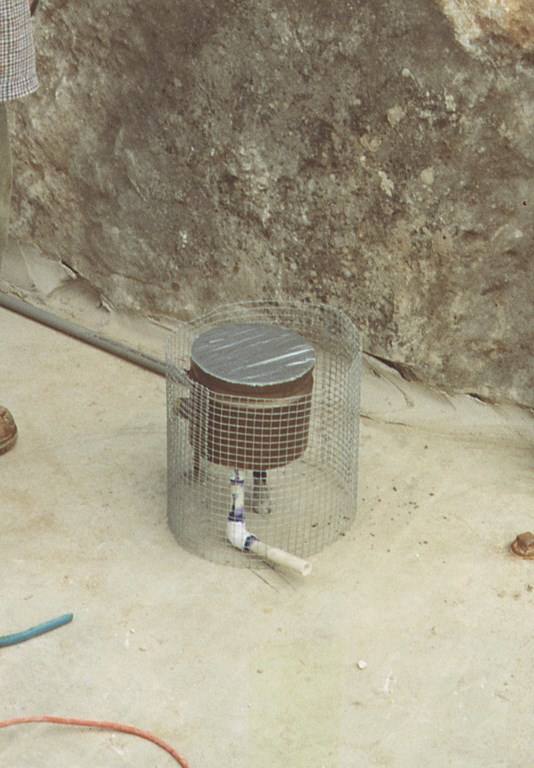 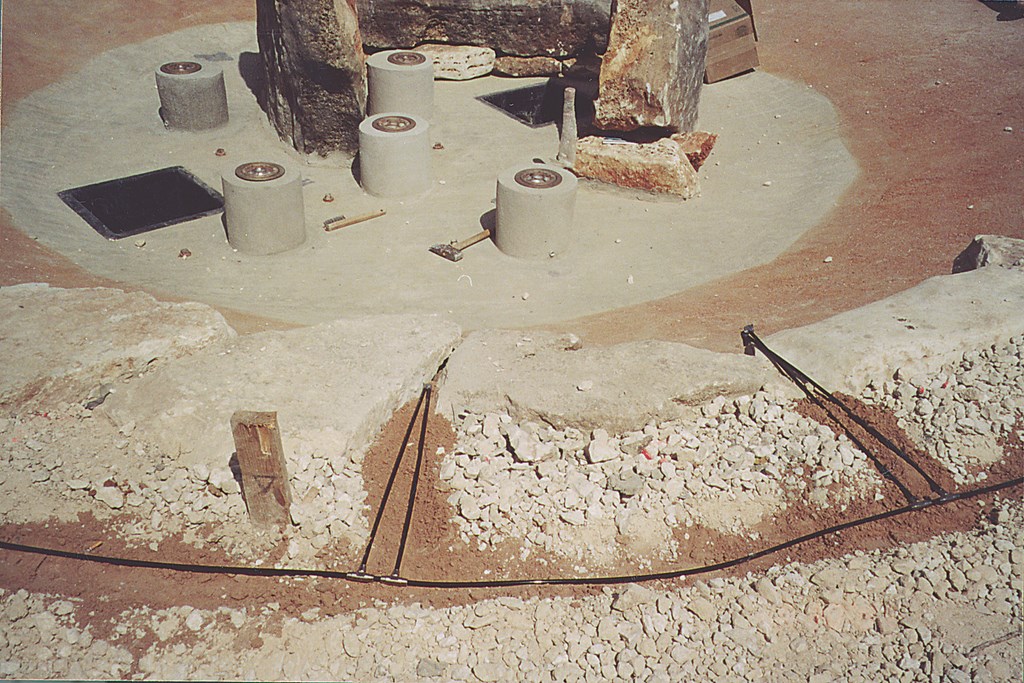 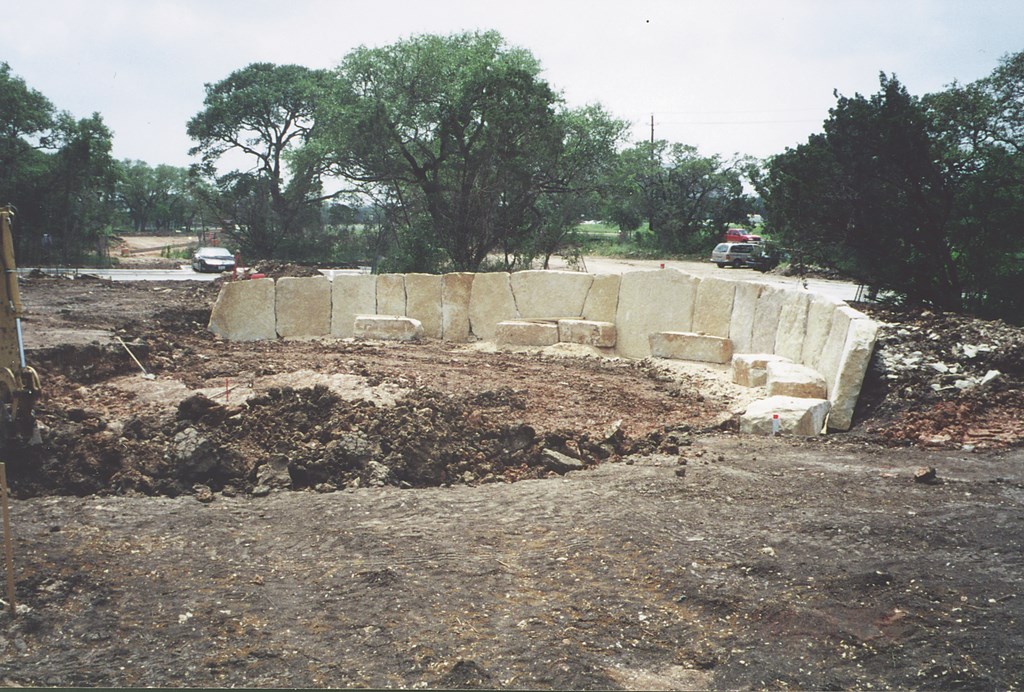 As this work proceeded, all concrete surfaces were acid stained and sealed with buff and cream colors to match the rest of the rockwork installed on site. At the same time, the small round lighting niches were formed and poured, and the piping for the 12-nozzle fog/mist system was installed around the basin’s perimeter. The fog is a visual bonus that has the added virtue of cooling the air around the central basin and making the area even more attractive to visitors.

The hardscape design also includes sitting stones that surround the feature’s central basin as well as a foot-deep layer of New Mexico river rock cobbles for the central basin and lower ends of the streambeds. The cobbles ultimately served to conceal fountain equipment, hardware and drains.

The hidden heart of the water system is our fiberglass-reinforced, direct-burial equipment vault. Approximately a six-foot cube, this vault is a factory-engineered, pre-tested system that contains the display pump, filtration pump and tank, water treatment system and electrical controls. The unit was installed below grade on a eight-inch-thick, reinforced-concrete slab, and Wilmot’s crews made the factory-specified plumbing and electrical connections. (The fog system’s equipment package was installed in a separate housing adjacent to the main vault.) The submersible niche lights, placed strategically around the perimeter of the central basin in small, raised concrete pylons, offer vivid nighttime illumination of the moving water elements and the fog effects.

Although this watershape is obviously man-made, the rough-hewn appearance of the massive boulders lends a natural touch to a distinctly sculptural setting. In operation, the streams pictured here each delivers 100 gallons per minute to the central basin. Various stepping boulders and concrete bridges allow visitors to traverse the streams and enjoy views of the central basin from a variety of angles.

Jon Mitovich is president and general manager of Roman Fountains, a designer and manufacturer of fountain-system packages and components based in Albuquerque, N.M. He graduated in 1976 from Southern Methodist University’s Cox School of Business in Dallas and has participated in seminars on fountain and pool design at UCLA and Harvard’s Graduate School of Design. Mitovich is a member of the American Society of Landscape Architects, the Construction Specifications Institute and the National Spa & Pool Institute. He has conducted classes and seminars on the fountain business and fountain design for various ASLA and NSPI chapters to help watershapers understand the origin, history and application of water in architectural environments. He also has written for a variety of trade publications, including WaterShapes.