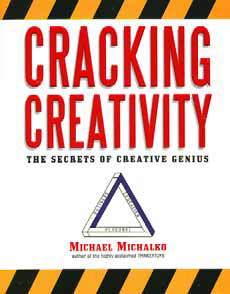 Working as a watershape designer, I’m always a little bit taken aback when people come up to me and say they’re so amazed by the work I do and that they know they could never do anything so creative themselves. It’s all part of a common perception that so-called “creative” work is produced only by people who were born with a particular talent.

Frankly, I don’t agree with that perception. As I look back over my career and review the work of others, it’s clear to me that creativity in design (or anything else, for that matter) is essentially a muscle we all can develop. Sure, some people have natural abilities that give them a boost, but the essence of creativity has more to do with the way you go about pursuing it than anything else.

Along those lines, I recently finished reading Cracking Creativity: The Secrets of Creative Genius by Michael Michalko (Ten Speed Press, 2001). This terrific, 300-page book tackles the nature of thinking creatively in great detail and depth and offers truly sage advice on how each and every one of us can foster our own creative sparks.

Michalko spent years in think tanks run by the U.S. Army and NATO, developing ways for military leaders to think more creatively in encountering logistical, tactical and even political problems and challenges. Through this experience, Michalko developed distinct methods for unlocking creative potential and offers several of those techniques and attendant perspectives throughout the text.

His entire discussion is based on the premise that if you want to obtain a fresh result in some area of your life, you must necessarily find new ways of thinking. That’s a logical and perhaps obvious starting point, but it’s one he backs up with specific discussions and examples.

Large passages are devoted to examinations of famously creative thinkers – Albert Einstein, Thomas Edison, Michelangelo and Charles Darwin, among others. As he points out, these and other great geniuses were successful in tackling big questions and problems because they approached them from original perspectives, in effect thinking in ways that nobody else ever had.

Over and over, he offers examples that support his key points – instances such as Edison’s repeated efforts to invent the light bulb or Einstein’s process of imaginative visualization, which he used in tackling immeasurably large physics problems.

One of the things that Michalko stresses in a variety of contexts is the power of making connections between ideas that are seemingly unrelated, offering a range of examples of how it works in problem solving. Some of the examples are prosaic, such as the manager of a lumberyard who started using CAD as a sales-support mechanism in designing decks, or the operator of a car wash who set up a dog-grooming salon as an adjunct to his business plan.

He discusses the power of music, art and nature in spurring creativity and also serves up a variety of specific mental exercises we all can use to ramp up our creative powers, including various group exercises for use in brainstorming sessions and well as individual ones that work to free the mind to move in purely conceptual directions.

As watershape designers, we’re often charged with combining elements of beauty, technical functionality, recreation, luxury and art in our work. I found that Michalko’s advice about shedding constraints and thinking with new techniques to be perfectly relevant to the types of challenges I face daily.

This is not easy reading by any means. In fact, it took me much longer than usual to get through the whole book, but that’s not because it was difficult to read in language or writing style; rather, it was because the ideas presented here require serious contemplation. Through it all, Michalko challenged my set patterns and had me thinking in fairly transforming ways – all useful to those who are open to looking at their work with fresh eyes.