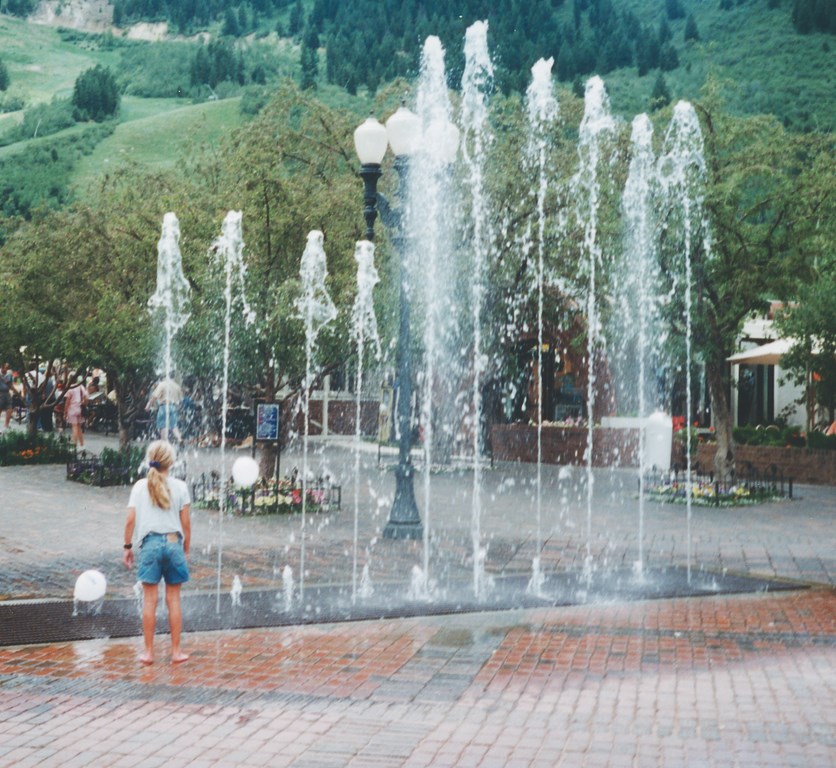 Just as with species in the animal kingdom, architectural construction styles and techniques evolve over time, adapting to changes in the environment.

In the case of fountains, these evolutionary transitions have been both complex and indicative of broader trends. Ancient wellsprings, for example, eventually gave way to decorative fountains with intricately carved stone sculptures. More recently, monolithic block, walled and stepped fountain forms have held sway.

It’s not much of a stretch to say that the latest significant “mutation” in this remarkable lineage is the dry-deck fountain: At a time when open space is at a premium and the public is being invited as never before to interact and participate in the architectural landscape, dry-deck fountains may well be the ultimate utilitarian medium and expression of the fountain designer’s art.

These watershapes allow for efficient use of space (a dry-deck fountain by day, for example, can be a multi-use space by night), minimize tripping hazards and open sight lines – and thereby put surrounding landscape forms and features on display. And the technology and mechanisms that make them work are hidden, which takes what might be an eyesore and turns it into a vandal- and theft-resistant aesthetic plus.

This is also a multi-use, multi-function watershape that transcends “attractive nuisance” liability issues, addresses requirements of the Americans with Disabilities Act (ADA) and offers rich aesthetic possibilities with more than a few advantages. It is, it seems, perfectly adapted to modern spaces and modern needs.

Of course, we talk about curbless, programmable, dry-deck fountains as novelties, but as is true of so many modern watershaping wonders, they actually follow in the footsteps of a much older precedent.

In the early 1600s, a designer by the name of Santino Solari set up an interactive fountain using what can only be seen as the curbless dry-deck principle for Marcus Sitticus von Hohenems at the prince-archbishop’s country retreat in Salzburg. Spray nozzles were positioned under the floor surrounding the archbishop’s dining table. Once guests were seated and dinner was under way, the fountain would be activated by the host to liven up the party – and this was 400 years ago! 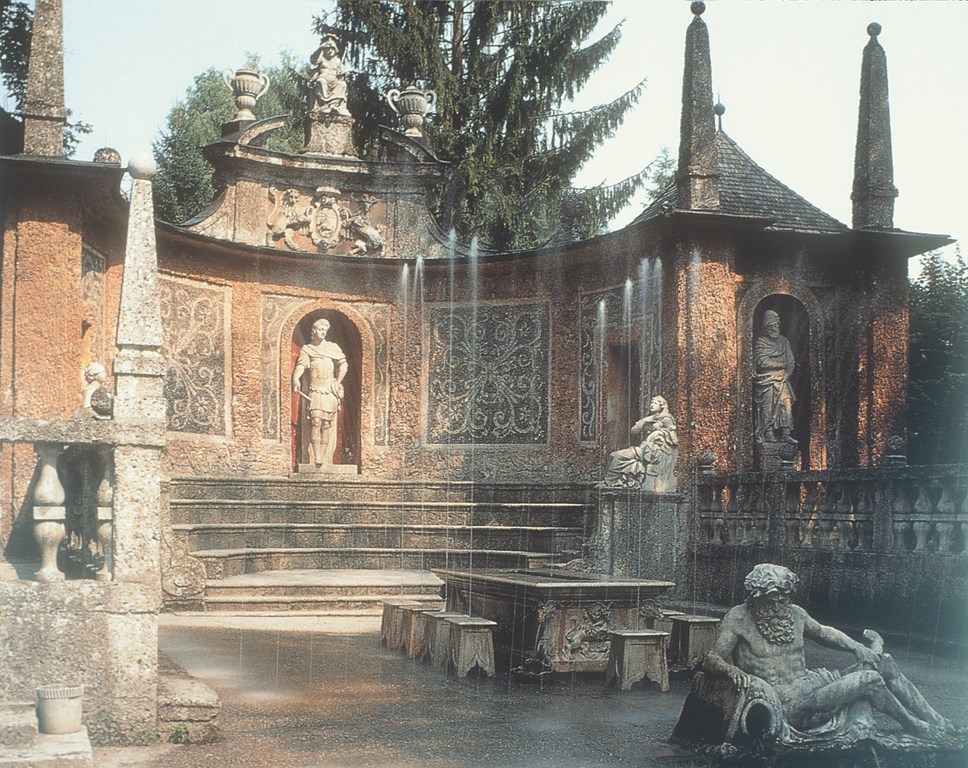 Today’s dry-deck fountains are driven by pumps rather than gravity, and the programming technology now being applied lends them far greater variety and more compelling aesthetics, so it is unlikely that today’s dry-deck fountains will be the evolutionary dead end Solari’s original turned out to be. In fact, dry-deck waterfeatures are becoming ever more common and are being designed and installed in a broadening range of settings that would make Maestro Solari very proud indeed.

Things have developed so quickly, in fact, that there are now two distinct technological sub-species under the heading of dry-deck fountains: 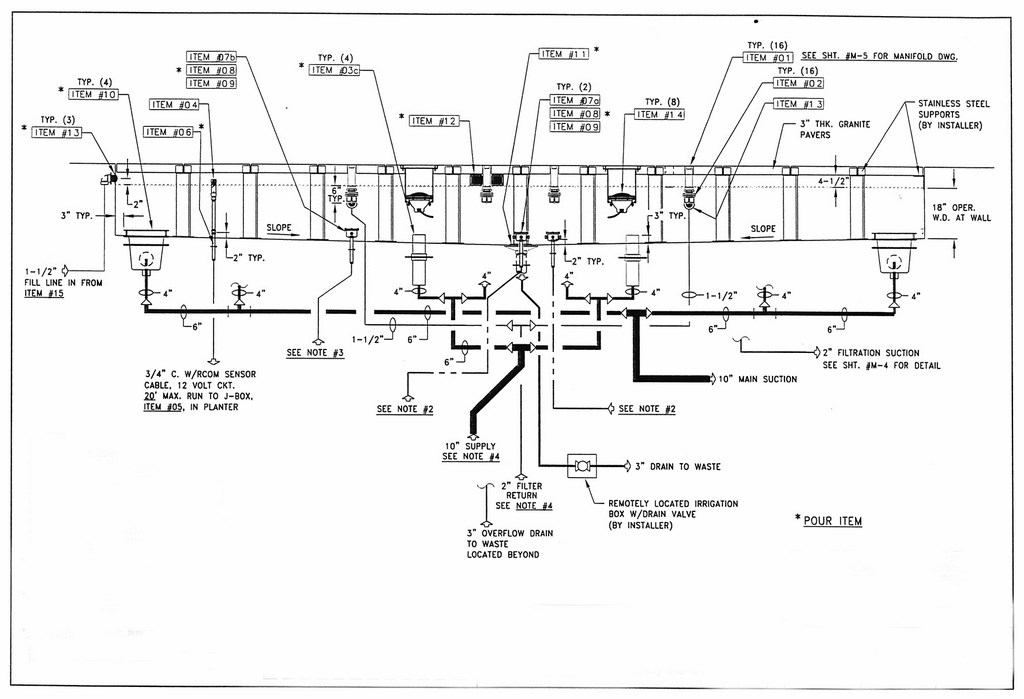 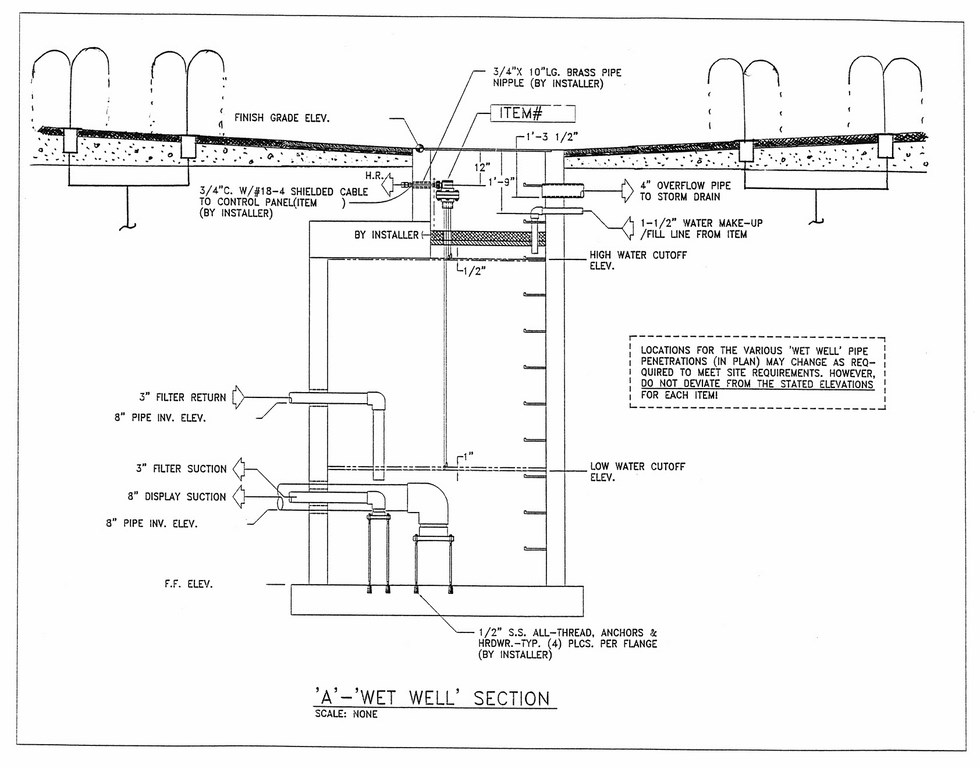 * The first sub-species uses a sunken reservoir or a vessel covered by decking material that is supported from below using a series of stanchions or supports – pylons of concrete or stainless steel, adjustable supports, fiberglass structural beams and gratings or a combination of these supportive elements (Figure 1).

Traditional fountain nozzles and lighting apparatus are generally applied when this approach is used. The reservoir below the pavers holds the mechanical and electrical devices that operate the fountain, while nozzles, valves, overflow drains, level controls, suction/return fittings, filtration equipment, lighting fixtures and junction boxes are all located below the decking and are accessed by removing whatever paving system is supported above the reservoir.

* The other sub-species uses a surge/storage-tank system. Typically, the tank is set somewhere between the fountain area and the equipment room or vault area, but sometimes it’s centered beneath the fountain (Figure 2, above). Here, the spray nozzles (and lighting system, if used) are specialized to the extent that they’re designed for direct burial and are set flush into the hard deck. 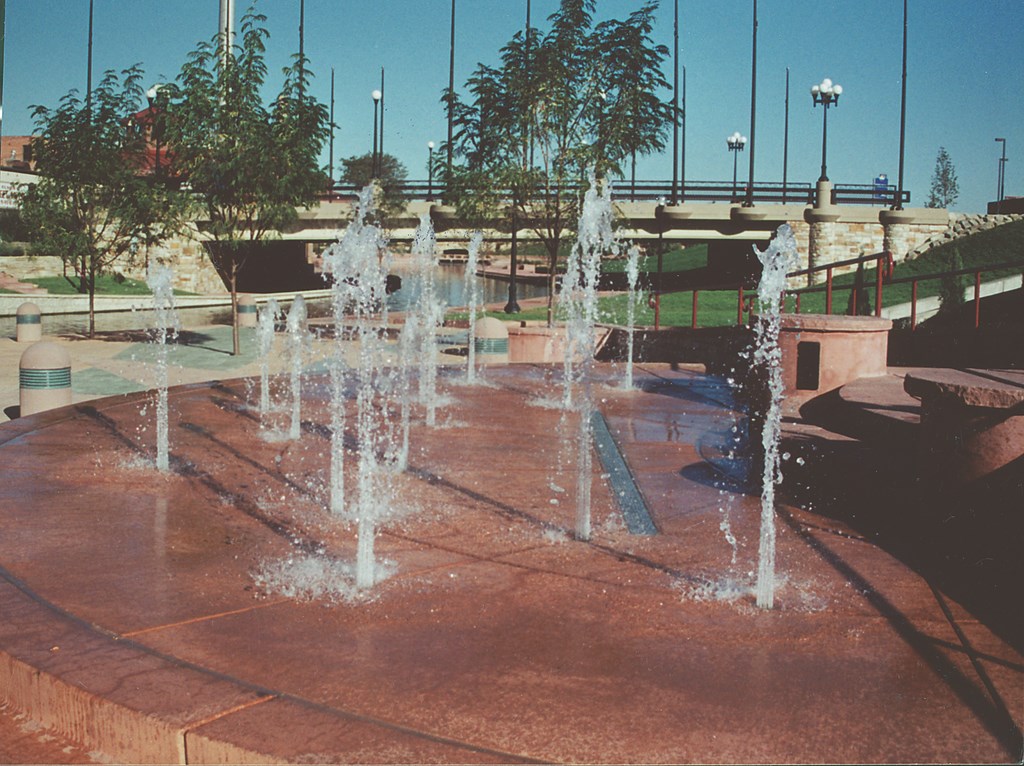 The sprayed water is captured by a drainage system – either a central drain or a perimeter system – and then returned by gravity to the surge/storage tank. The pump system draws water from the tank and recirculates it once it has been filtered and treated.

Each of these systems has its distinct place in the world, but they can still be discussed generally (as below) as variants on the same set of design, engineering and construction principles. Basically, however, dry-deck fountains equipped with surge tanks and remote equipment sets have a number of advantages over their sunken-reservoir cousins, as indicated in the first sidebar below.

The discussion of advantages one approach has over the other has been set apart from the main text because, regardless of driving structure, all dry-deck fountains feature basic elements that must be managed to ensure successful results:

[ ] Fountain footprint area: All nozzles splash and are susceptible to wind drift, so as a rule you can expect to wet a radius around each nozzle roughly equal to its spray height. Thus, a center nozzle spraying to a height of 25 feet can be expected to have a “fountain footprint” of 50 feet. 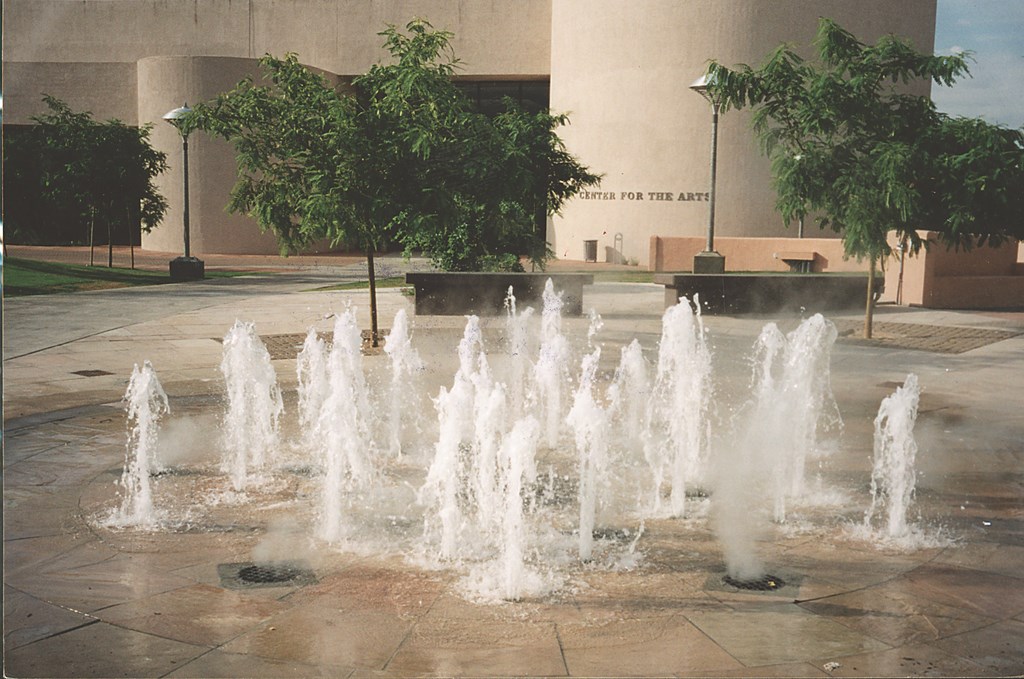 Nozzles on the perimeter of the footprint need to be accounted for in the same way, meaning a perimeter nozzle that sprays to six feet high needs an additional six-foot footprint moving outward from the fountain’s center to handle the splash. This rule applies in both calm and windy conditions, with the added proviso that, in windy areas, a sensor should be incorporated into the system to lower the fountain’s spray heights or shut the system down completely until wind conditions permit operation within acceptable splash parameters.

[ ] Drainage and pitch: The fountain designer’s best intentions can be dashed without proper planning of drainage slopes. Nozzle spray must be captured, managed and re-routed in accordance with the fountain footprint mentioned above. 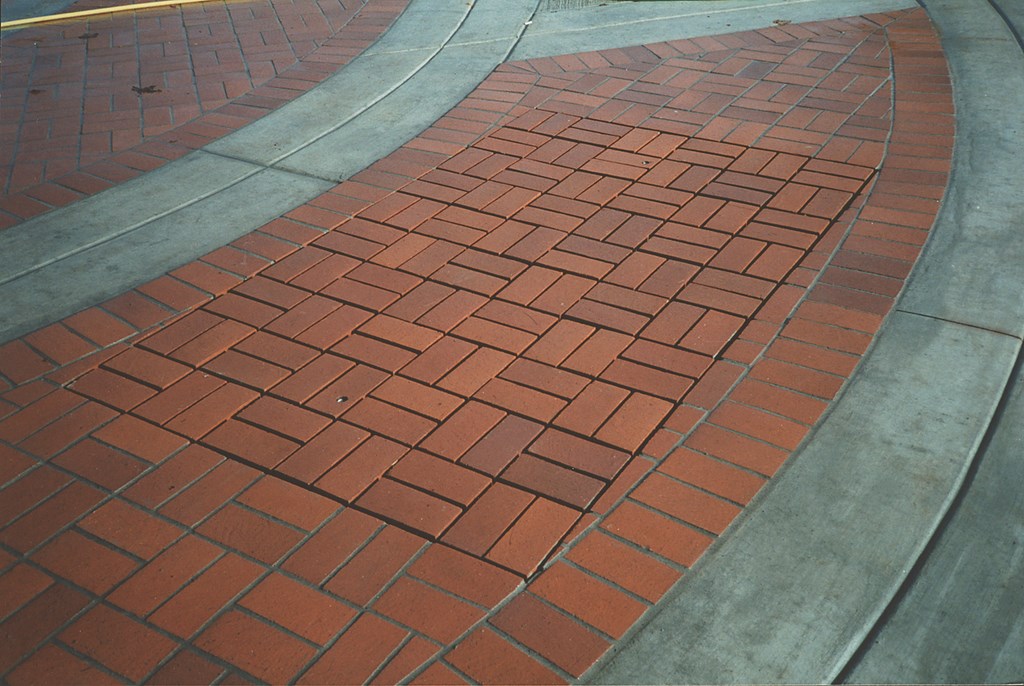 Gravity is a wonderful ally here and will cause water to seek the lowest elevation. All you need to do is design the site to manage the run-off and return it to the fountain basin or storage tank.

[ ] Surface Gapping: Dictated by practical and safety concerns under the Americans with Disabilities Act (Title 27), surface gapping is also a key design feature in a dry-deck fountains that is related to the amount of water that must be returned to the recirculating system. Gaps in the surface material should not be any wider than an half inch in any location – a width calculated to keep pedestrians from wedging a wheel, heel, toe or finger in the gap – and are in fact usually held to a maximum of 3/8 of an inch.

It is important in overall system design to determine the total amount of “open gap area” that will be needed for the system to handle the operating return volume while avoiding any deck flooding. It doesn’t take much to understand how dysfunctional a fountain discharging 1000 gallons of water per minute would be with a deck system that lacks the drainage capacity (that is, adequate spacing between pavers) to transfer that flow. [ ] Support and access of surface material: Understand the requirements and limitations of your material. Granite pavers three inches thick and 24 inches square, for example, will weigh in at 300 pounds each and will require a different support-engineering approach than will lightweight rubberized decking. You’ll also need to distinguish your design approach if the deck will be expected to support periodic vehicular weight rather than that of the occasional adventurous pedestrian.

As a rule, there simply are no short cuts in these calculations for any dry-deck system, and the services of a qualified structural engineer should be engaged early in the process. 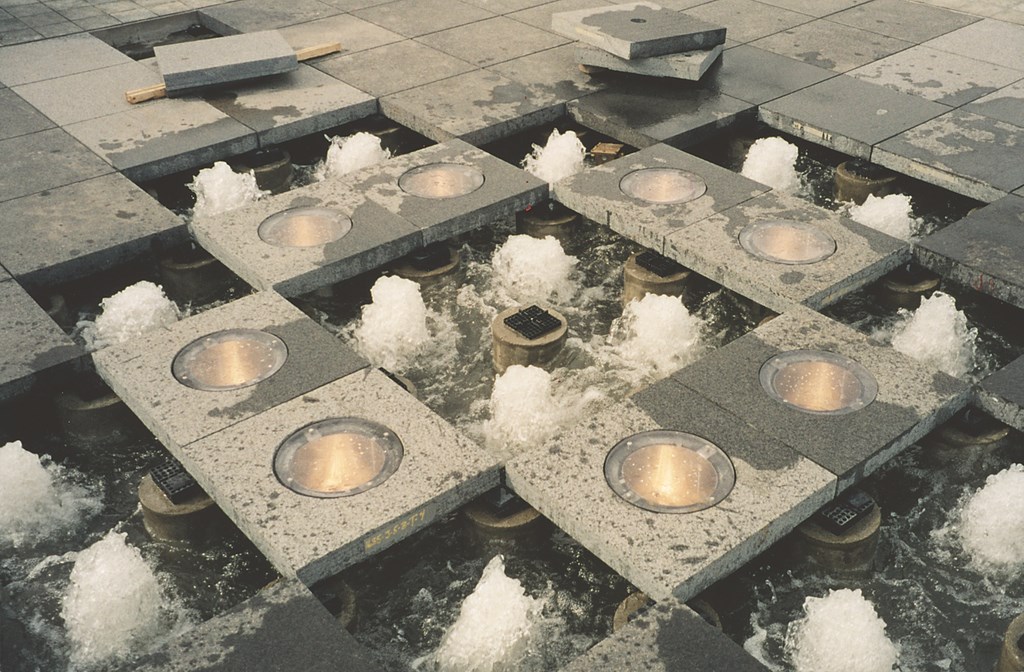 In addition, access/service issues must be addressed up front. Certain equipment items should be located below easily removable pavers for quick access, which means that lifting eyes and handles should be designed in at key paver locations. The trick is to identify all possible applications and uses of the deck area before materials and support systems are selected.

[ ] Water treatment and system maintenance: Fountain systems are like cars: They require periodic maintenance and service in order to operate properly. By analogy, a genuine commitment to fountain-system maintenance by any owner or operator is critical before the decision is made to incorporate any architectural fountain. 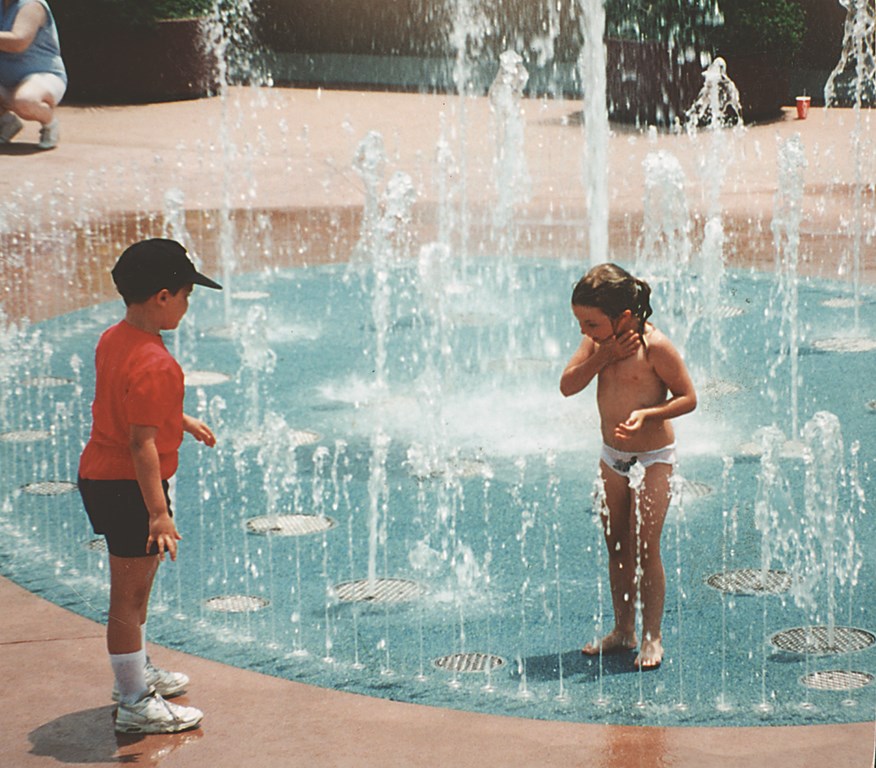 Moreover, dry-deck fountains are by nature accessible to the public. Without the curb barrier found in traditional fountain designs, it is inevitable that people will come in contact with (and possibly ingest) the water, which means that all such fountains should be properly designed with filtration and chemical-treatment systems in the plans.

For all practical and public-safety purposes, the water in a dry-deck fountain should be treated in the same manner as swimming pool water – and the up-front and ongoing costs of that treatment should be planned for in budget and personnel allocations.

My discussion of those basics has been technical and fairly clinical, but the fountains governed by those principles are about as exciting and engaging as any watershape can be. Indeed, fountains that were once protected marvels to be viewed from a safe distance are now seamlessly integrated into the architectural landscape and invite public participation and interaction.

It’s our task as fountain designers to take these basic structural and engineering requirements, incorporate them into any dry-deck design to ensure its structural integrity and safety and integrate surface decking into the overall site plan. If we do so, we will continue to drive fountain evolution along and turn what was once a single-function, decorative architectural element into a functional, utilitarian, multi-use amenity that is, in a word, fun.

Jon Mitovich is president and general manager of Roman Fountains, a designer and manufacturer of fountain-system packages and components based in Albuquerque, N.M. He graduated in 1976 from Southern Methodist University’s Cox School of Business in Dallas and has participated in seminars on fountain and pool design at UCLA and Harvard’s Graduate School of Design. Mitovich is a member of the American Society of Landscape Architects, the Construction Specifications Institute and the National Spa & Pool Institute. He has conducted classes and seminars on the fountain business and fountain design for various ASLA and NSPI chapters to help watershapers understand the origin,history and application of water in architectural environments. He also has written for a variety of trade publications, including WaterShapes.