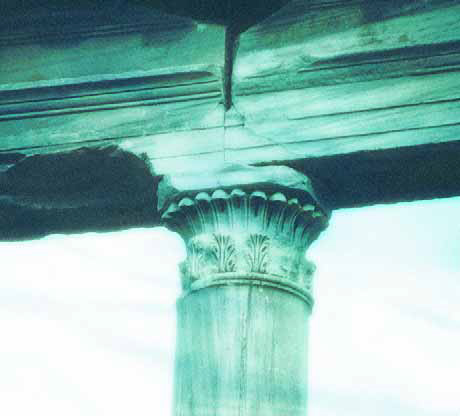 I spent ten days this last December traveling in Turkey – my second visit to the country in the past several years and a trip that reinforced vivid memories of just how mind-expanding a place it is.

The Greek, Roman, Byzantine and Ottoman empires all held sway over this patch of land at times during the past 2,500 years, and throughout that long history, these and other great civilizations of both East and West have made their marks on the place. Situated at the crossroads of land- and sea-trade routes between Europe and Asia, Turkey has vast, rich reserves to drawn upon when it comes to art, architecture, history, crafts, music, religion and cuisine.

Of all the exotic places I’ve been fortunate enough to visit, I can honestly say that Turkey is the most surprising of them all – and among the most historically significant and fascinating places on the planet.

From my perspective as a watershaper, I saw the whole country unfold as an endless gallery of design modes, motifs, ideas and traditions. I saw some of the world’s oldest and most spectacular water systems – many of them still functional even thousands of years later. Ancient cisterns, Roman aqueducts, public bathhouses and spas, decorative fountains, reflecting pools, managed rivers and more are strewn among an array of ancient ruins, historic settings and modern streets.

It’s no exaggeration to say you could spend a lifetime exploring the region and never see everything you’d want to see.

On my recent trip, I had the privilege and pleasure of traveling with an extremely knowledgeable tour guide named Atakan Acar – without a doubt one of the most professional people I’ve ever worked with in the travel and tourism industry. His level of insight into the history that lurks around every corner of Asia Minor was invaluable as we made our way from our starting place in Istanbul, traveled to the cities of Izmir, Sardis, Pergamon, Didyma and Troy and lingered in churches, mosques, museums, parks and plazas along the way.

Every single day, I confirmed my belief in the value of education – and specifically in the sort of education you gain from travel. Every day, I was reminded as well of the resistance so many pool and spa designers have to looking to and learning from what great designers have done through the annals of time.

I kept tripping, for example, over the notion of “Grecian-style” pools as we know them in the United States. These are typically rectangular vessels with semicircular details at the ends, or sometimes they are pools decorated with simple columns or perhaps some statuary. When you examine the amazing variety of Hellenistic architecture found in Turkey, however, you begin to understand just how limited our perspectives and frames of reference really are – even among the more educated members of the watershaping community. 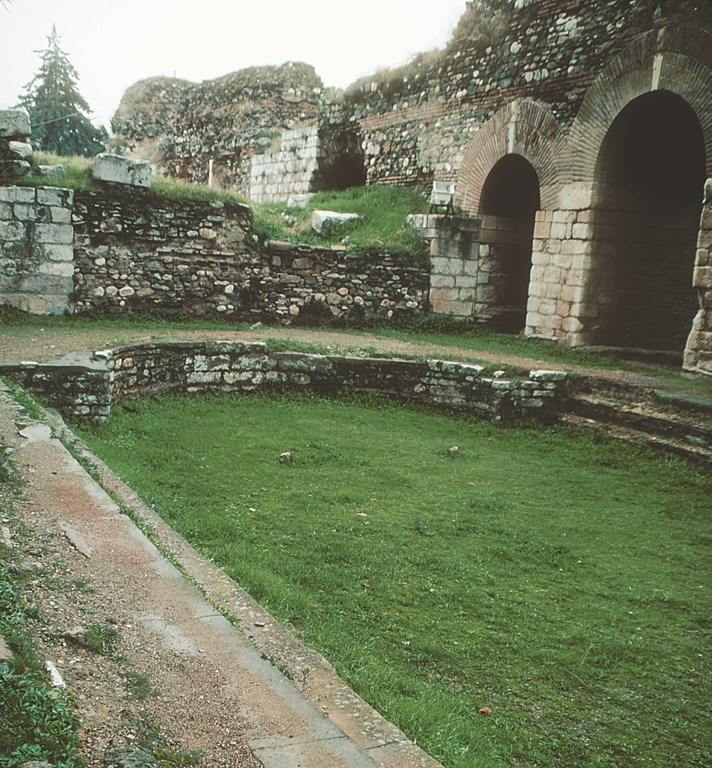 I’ve long harbored the thought that we in the United States have the sense that we pretty much invented the wheel when it comes to pools and spas, but when you go to Pergamon, for example, and see the world’s first known hot-water spa, beautiful mosaic-tile floors, spectacular columns and fantastic natural materials – and absorb the fact that these things have all stood there for millennia – it becomes apparent that, for all of our accomplishments, we are neophytes tracing the footsteps of craftspeople of long ago.

When we think of them at all, for example, we in America tend to categorize classical column forms as being Doric, Ionic, Corinthian or Composite, depending upon the style of their capitals. In Turkey, however, you’ll see literally dozens of variations on each of these standard visual themes. And you see these variations everywhere, from the support structures of ancient buildings and aqueducts to the towers and minarets that top large public buildings and mosques.

Vivid colors, expressive natural materials and religious/cultural symbolism are omnipresent in both interior and exterior designs throughout Turkey – and so is water.

Over and over, I saw evidence of this in the way ancient as well as more modern cultures have contained, used and controlled water. I visited drainage and sewer systems that have functioned for thousands of years, for instance. I also saw big, impressive fountains run by gravity-feed systems that have served decorative purposes for centuries while simultaneously (and more importantly) cooling today’s masses when the weather is hot. 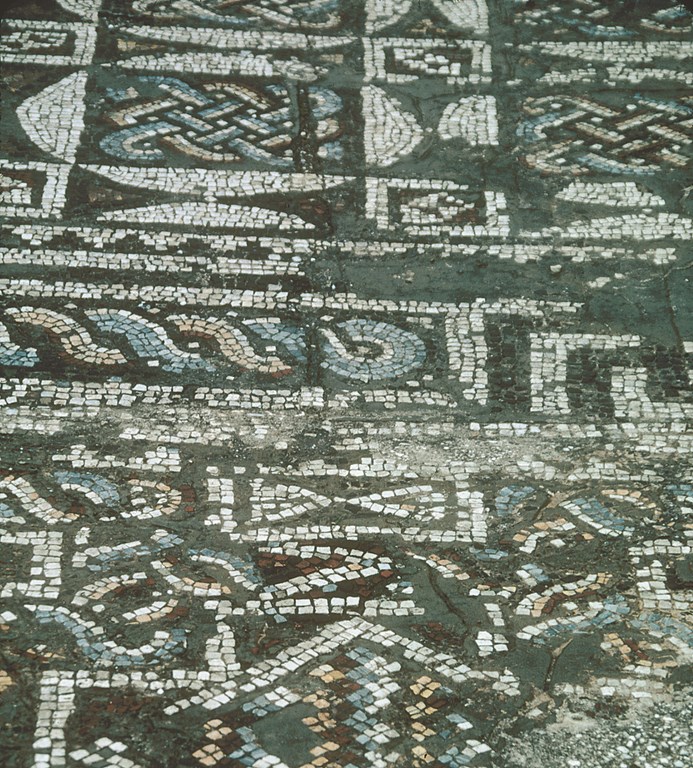 I was particularly impressed by the soaring arches of Roman-era aqueducts. They’re still found throughout the region – fully intact and looming overhead and seeming contemporary rather than relics of an ancient past. I also found, beneath a basilica in Istanbul, a cistern that had been built in 532 AD – and that still holds water. In Didyma, I saw reflecting ponds built hundreds of years ago that also still hold water and continue to reflect the surrounding greenery and architecture.

To be sure, we in our time and place see water used for ceremonial purposes in churches and mosques. We see water used for purely aesthetic reasons where streets and thoroughfares are cantilevered over large man-made streams. But to encounter these watershapes 500 or 1,000 or even 2,500 years after their construction is truly remarkable – as in Sardis, where I saw a beautiful urn fountain with delicate mosaic-tile floors that are still colorful and beautiful after thousands of years.

In our work, we sometimes think of improving the appearance of a structure by veneering it with natural or synthetic materials. In Turkey, entire ancient cities are veneered in spectacular limestone and marbles, with awesome carved figures and tile inlays throughout. These are remarkable works of art that have endured for centuries – and even as one who takes a tremendous amount of pride in doing quality work, I have to admit that these artists, designers and craftspeople possessed passion, knowledge and skill that makes my own work seem not quite so significant as I might like it to seem.

In other words, you could say that my recent experience was quite humbling at the same time it was incredibly inspiring.

The sorts of ideas and influences to be collected on this type of journey can affect the open-minded traveler on many levels.

On the most basic and immediate level, Turkey is a beautiful country filled with warm and welcoming people. In design terms, however, the influences are virtually endless with respect to shapes, textures, colors and styles. I took hundreds of photographs as I made my way from place to place, and I’m certain I’ll be referring to those images as a source for inspiration and specific design details for years to come.

The way I see it, this trip was an investment in my professional education. Further, it’s education of a sort that has at least as much importance as the kind of formal education to be gained through a college or university. Actually seeing these settings and artifacts, up close with your own eyes, opens your mind to the riches of history and to an even deeper appreciation of our cultural heritage. 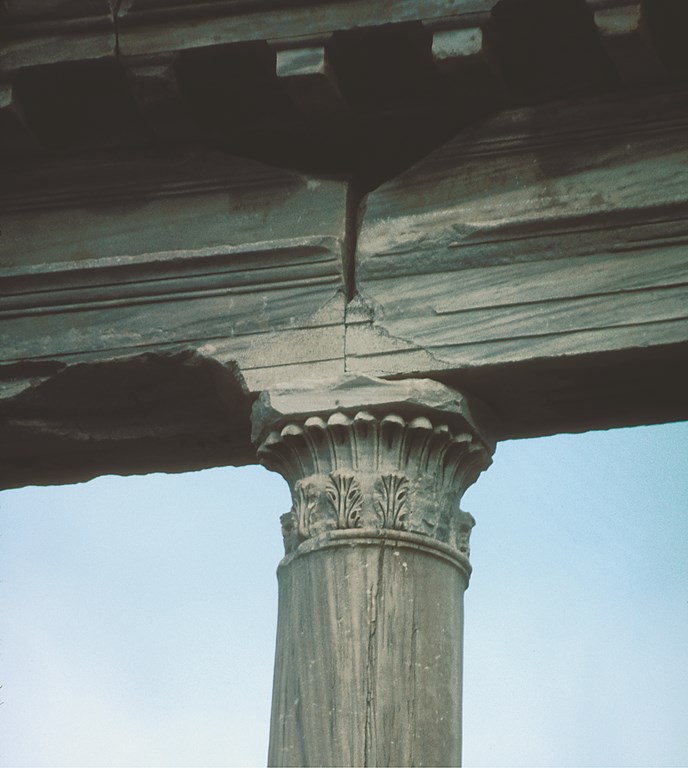 That heritage, in my book, is something taken too much for granted on a continent where history reaches back just a relative handful of years. Travel in ancient places yields not only knowledge that you can use in your professional life, but also builds a basic cultural literacy that will enrich you in ways that are not entirely definable or predictable.

A dramatic example of this sort of deeper awareness hit me right between the eyes at the Temple of Apollo in city of Didyma. At the base of a fantastic set of Ionic columns, I saw shocked to see what appeared to be swastikas. My guide informed me that this ancient symbol, grossly corrupted through its abuse in the 20th Century, was used by the ancient Greeks and others to suggest natural motion such as the meanderings of rivers across rocky terrain – particularly appropriate in Didyma, which is located near the banks of the Meander River.

On a more benevolent level, I saw over and over again how architecture is infused with religious imagery. An example is the meaning of the common spider-and-pigeon icons of the Muslim faith, a motif found quite often in the ornamentation of mosques and other buildings. I learned that the spider and pigeon became important when the prophet Mohammed hid in a cave while fleeing persecution: His presence there was concealed by a spider who wove a web at the mouth of the cave and a pigeon who sat just behind the web. When Mohammed’s pursuers saw the bird behind the undisturbed web, they assumed that no one had recently entered the cave and moved on.

Not all the visual metaphors were so literal. I learned, for example, how color has been used throughout the centuries to signify certain aspects of religious life, with the soft greens I admired so much in mosques being used to signify heaven, the whites to represent virtues and godliness and the reds to represent royalty.

I suppose you could dismiss a good bit of what I’m saying here as the impassioned ramblings of someone who’s just returned from a wonderful vacation with a big pile of slides. 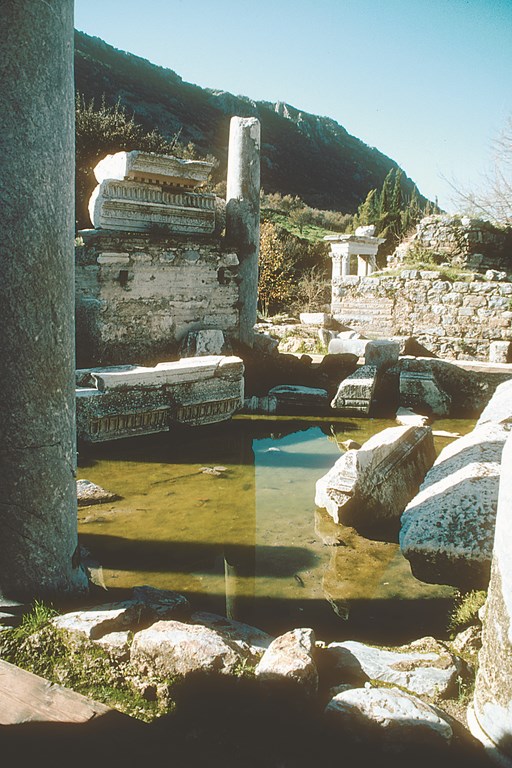 On a certain level, you’d be right, because I did have a great time. But when I think about the importance of understanding the specifics of art history when it comes to any honest-to-goodness design education, I can’t help believing that this sort of experience is the foundation of what we do and the legitimate core of our educational endeavors.

In other words, you simply cannot fully understand or appreciate the value of this sort of experience unless you go and experience it yourself. This was the motivation behind a planned Genesis 3 trip to Turkey in 1999 that was cancelled because a series of major earthquakes forced the temporary closure of many architectural treasures – and will, I’m certain, lead to a revival of the idea in the near future.

In the meantime, I’m preparing a pictorial on the trip that will run in an upcoming issue of WaterShapes – an article that will, I’m certain, expand considerably on topics and images seen here.

If your desire is, as mine is, to create beautiful, well-designed, well-constructed watershapes, then I cannot recommend in strong enough terms the value of visiting these amazing cities at the crossroads of East and West. Even if your desire is simply to become an educated, well-traveled, well-rounded person, then this type of exploration will serve you very well indeed.

For my part, I’m humbled by what I saw in Turkey – and can’t wait to discover even more the next time I return.