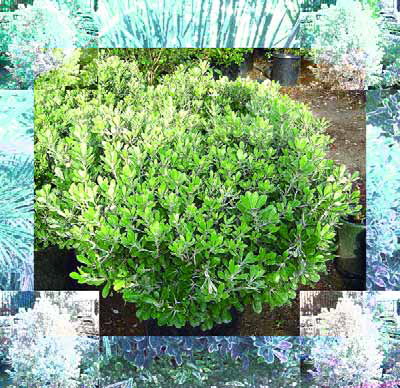 In looking back over several recent projects, I noticed that I’ve been using one particular genus of plants more frequently than just about any other.

Its name probably evokes thoughts of petri dishes and bacterial colonies for most of us, but this plant genus – Pittosporum – has truly held an extremely valuable position in most of my plant palettes in recent years and is one of the most useful of all plant types I use.

I find myself pointing them out every time I take clients to a nursery to view and select plants, and it seems I’m always trying to find ways to fit one or more of its many varieties into my planting plans. I treasure them for their great variety in color, form, texture and even scent – a versatility that often lets me use several types within a single design.

Pittosporum is a genus composed of evergreen shrubs and trees and in my experience is among the hardiest groups that grow in California.

It’s been used extensively since the 1960s and is a standard selection in many commercial designs because of its hardiness and visual appeal. In color, the leaves range from a very light gray-green to an intensely dark green; in form and size, they go from low, mounding shrubs to large, graceful, slightly arching trees.

I consciously and conscientiously use these variations to my advantage placing these plants in the fronts of borders, using them as anchors to an entire design or placing them as filler shrubs in the middle or back of borders where a plant is needed to blend in. I’ve also used them as specimens against a wall, where their forms can be highlighted vividly. On occasion, I’ve used five or more varieties of Pittosporums in just one design.

These plants do best in warm climates, so they may not be of immediate use to some of you. I’m certain, however, that there other species with a similar range of possibilities and points of distinction – more than enough to give you the sort of versatility I’ve found with Pittosporum.

Too many of us tend to find a favorite plant within a genus and use it over and over again. For me, Pittosporum broke me of the habit – and if my experience here can be translated to yours with any genus, take a look at what’s available: You might just find something else within a genus that might make a valuable addition to your designs.

I’ve found all these Pittosporum varieties by observing others’ design work and conducting regular nursery visits during which I ask lots of questions and pay particular attention to what I see in the “hold” section where plants await pickup or delivery. In Pittosporum, I’ve discovered a workhorse for my designs that offers many different visual forms, low maintenance and an ability to transform my clients’ gardens into something never before seen in their neighborhoods.

Let’s run through a list of different species within the Pittosporum genus that I have found particularly useful: 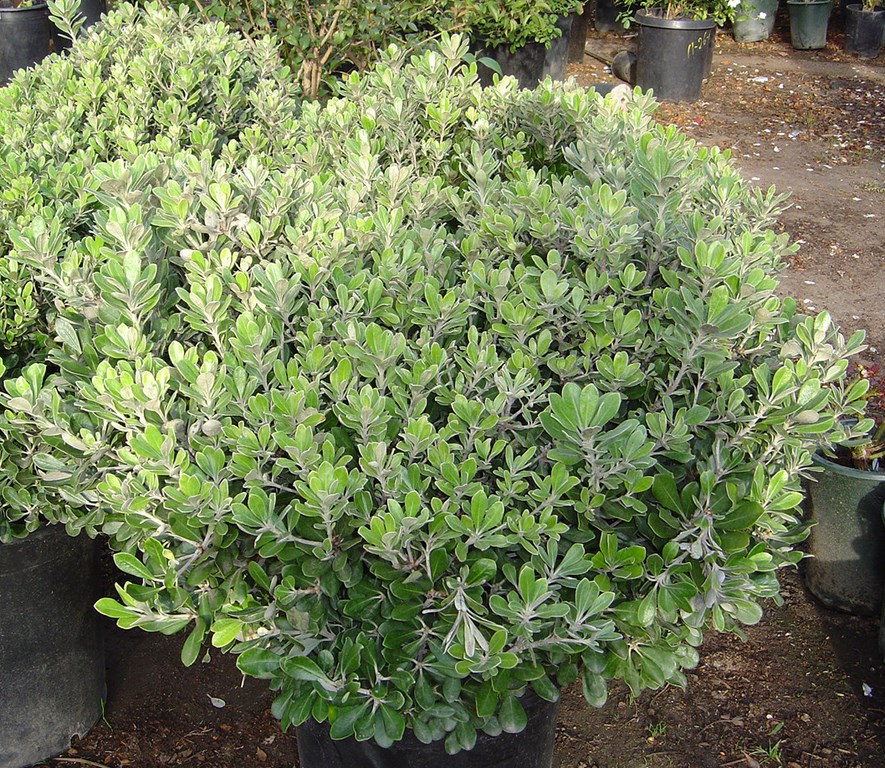 [ ] Pittosporum crassifolium: The first time I saw the ‘Compactum’ variety of this plant, it lined the entry path to a classic, Italian-style home where its gray-green leaves contrasted quite subtly with a bed of English Lavender and the darker gray-greens of Olive trees. The compact variety usually grows to no more than about three feet tall and wide and works very well at the front of a straight border or when used to punctuate an undulating border at even intervals.

There’s also a taller variety of this plant that can reach as high as 20 feet tall and 20 feet across, but I typically see it as a six- to eight-foot tall single plant or hedge. With either variety, I like to surround these plants with darker foliage so that their unique colors and forms stand out. 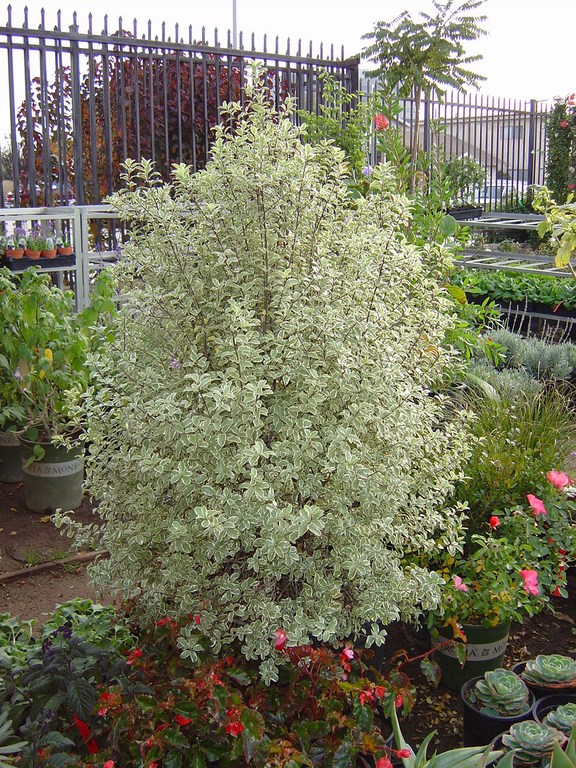 [ ] Pittosporum tenuifolium: This is my current favorite among all Pittosporums – and it’s held that position for quite some time despite my usual tendency to tire quickly of new, unique plants that suddenly everyone starts using. Despite myself, I keep finding situations in which the ‘Silver Sheen’ variety of this plant continues to dazzle my clients.

Basically, Pittosporum tenuifolium is an upright shrub with dark twigs and leafstalks that contrast with its medium-green leaves – a great alternative to the myriad shrubs used as hedges in my region.

‘Marjorie Channon’ is the variegated version and is particularly useful against darker foliage or in a partly shady spot in which the white variegation creates the illusion of light filtering through the canopy. But my absolute favorite is ‘Silver Sheen,’ with the tiny, reflective leaves that work spectacularly as a specimen against a light-colored wall. It has a lacy form so gentle that it can’t help but draw attention when contrasted with a lighter color. (I have also seen a variegated version of the ‘Silver Sheen’ variety, but I haven’t had the opportunity to use it yet in a design.)

In a situation where you might have the opportunity to place a lacy ‘Silver Sheen’ specimen in a place where it’s seen against the backdrop of the sky, it’s form would be beautifully emphasized. It also would have tremendous, double appeal when reflected off the dark, cool surface of a watershape. 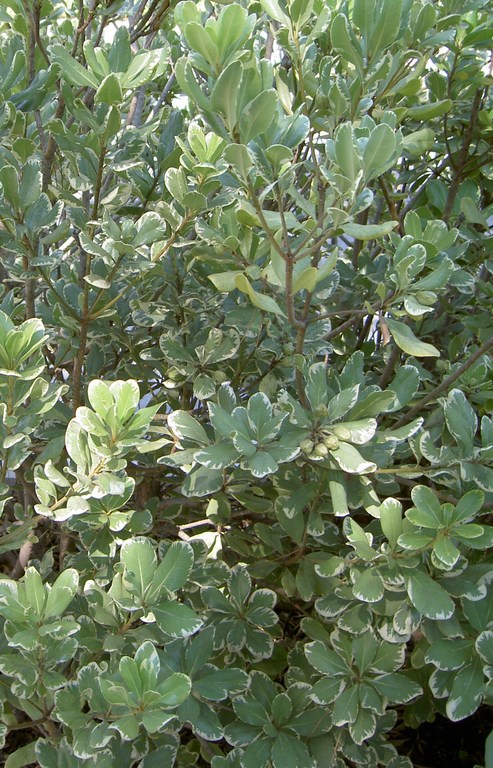 I’ve used ‘Wheeler’s Dwarf’ quite successfully to cover slopes that have needed low-profile, low-maintenance planting. Lately, however, I’ve been shying away from this species because I think it’s been over-planted. That doesn’t mean I won’t use it at all: As with any plant, it’s worth regularly revisiting its use – particularly if you’re someone who likes to design with a twist by weaving together new, unusual plants with the “old school” vibe a plant like ‘Wheeler’s Dwarf’ offers.

Another reason I can’t break entirely away from this variety is the slight citrus fragrance its gives off when in blossom each Spring – a scent that explains why it is commonly referred to in my area as “Mock Orange.”

[ ] Pittosporum undulatum: This is the largest tree in the group and was once my nemesis. For years, I had one in my yard that stuck out like a sore thumb – literally, as that was the shape it adopted in the course of about 20 years of inattention. 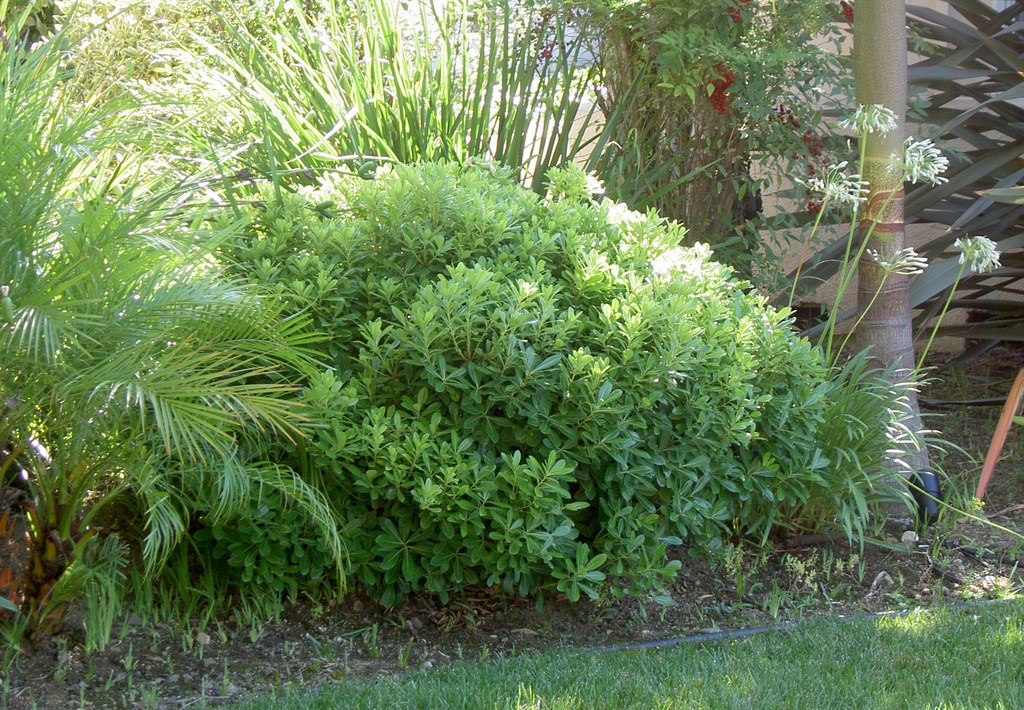 I was ready to hit it with the wrecking ball, but an arborist persuaded me to lace it out and give it a much more graceful appearance. I did so and was pleasantly surprised to find what a nice contrast its soft, slightly arching canopy made to the majestic Oak and towering Ash, Pine and Pepper trees that also grace my hillside lot.

Since that experience, I’ve often found myself suggesting this course of action to other dissatisfied Pittosporum owners, as well as adding it to their designs. It’s a slow grower initially, but it’s worth the wait for a form rarely matched by other tree selections. I recommend seeking out larger specimens for instant gratification.

The only drawback with this variety is its fruit drop, which (with strategic pruning) can be minimized.

This genus doesn’t thrive in cold climates, but the underlying principle is the same. If your region supports a genus that contains several hardy plants, do a bit of research and see if there are plants within that genus that have the same general characteristics but different qualities when it comes to colors, textures, sizes and forms. It may add just the edge you need to make your designs stand apart from everyone else’s.