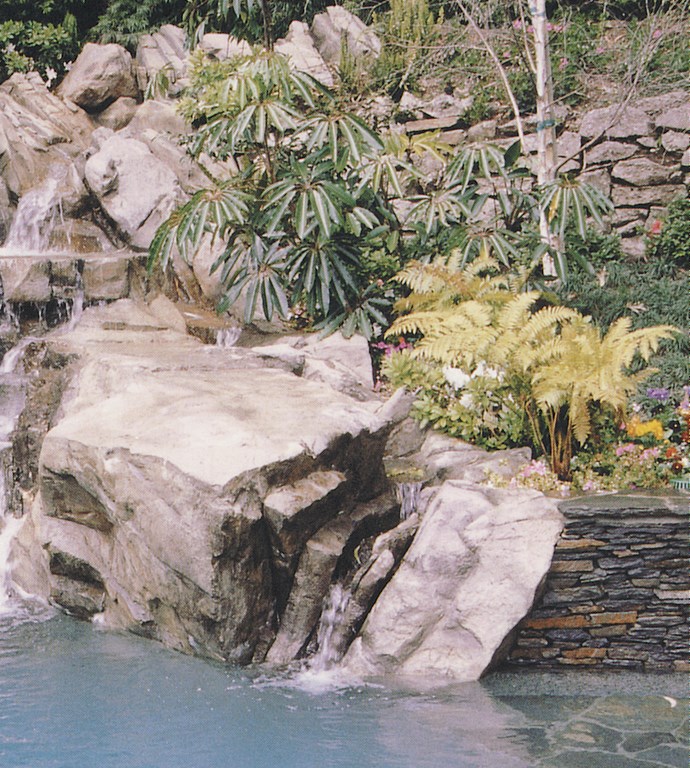 The most important use of faux rock is to make a geological statement – to provide an important accent or focal point in a landscape where none exists. My goal is to create rock formations that complement and enhance the natural setting and fit in harmoniously with their surroundings.

That’s a point builders who use artificial rock sometimes fail to grasp. They’ll execute an ambitious scheme with lots of interesting, well-crafted rockwork, but it ultimately looks unnatural because the rocks they’ve created have no logical relationship to any indigenous formations or anything else in the surrounding space.

I approach things in a different way – one that embraces the site and all of its features. I select, form and install faux rocks that, together, create interesting and beautiful statements in the overall landscape design. As I work, I make my installations to stand up to the question, “Is this rock formation believable?”

Let’s take a look at what’s involved in meeting that lofty standard.

In this context, “believable” does not mean random duplication and placement in a landscape of any rock you happen to have run across in nature. The fact is, most rocks in nature aren’t particularly what I’m looking for as a landscape accent: I’m interested only in the most aesthetic formations I can find.

Think about it: Rock formations are simply combinations of rocks clustered together, and lots of the component rocks are pretty ordinary – too random to be used as the focal point of a residential or commercial watershape. 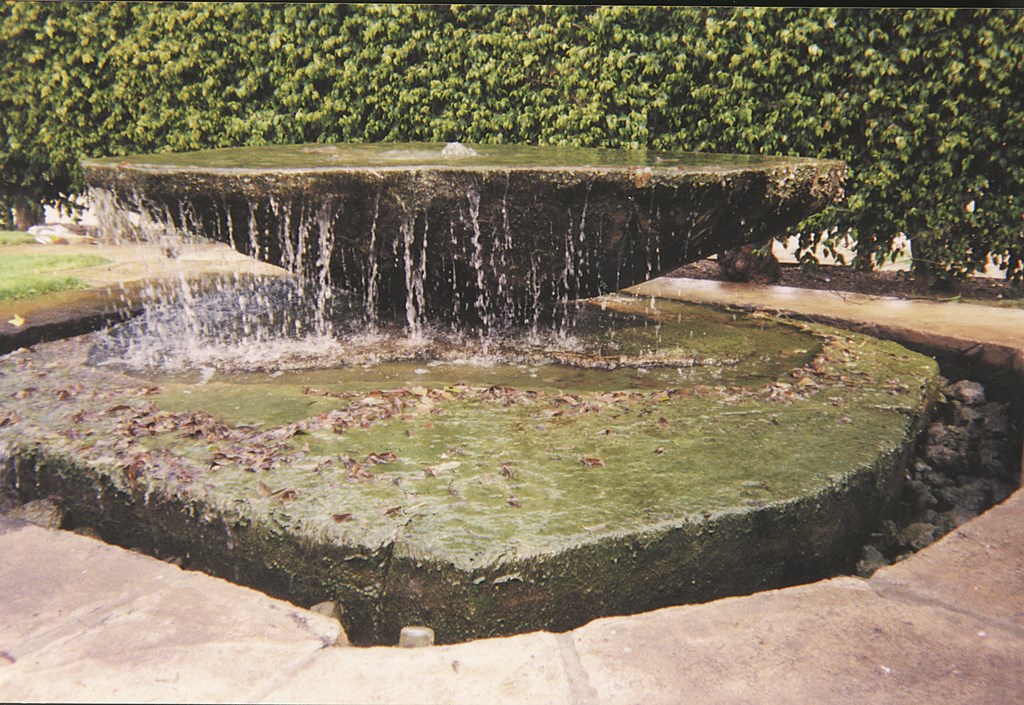 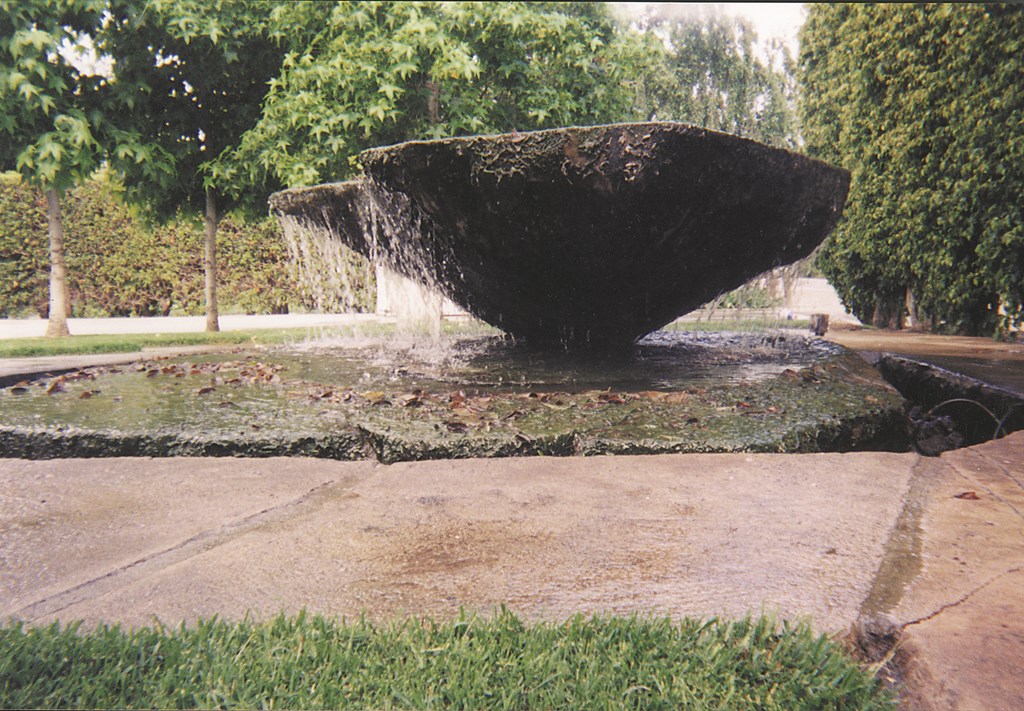 The ones that seem to impress us are those that fit together with others in patterns that make rugged, powerful and/or dramatic statements. These are the formations that find their ways onto picture postcards, structures that present distinct shapes and patterns that catch the eye and create lasting impressions.

Used in a residential or commercial landscape design, these same rock formations can be equally extraordinary. In effect, you have the opportunity to take the very best of nature’s creations and duplicate them.

With every job we do, I come to the site believing that, by borrowing eye-catching formations from Mother Nature and recreating them as well-formed and finished rock formations, my work can make all the difference between the mundane and the dazzling.

That’s because good rockwork can make an impressive statement like few other materials. In fact, I’ve seen rockwork create emotional responses in even the most stoic clients, who often become so inspired that they start asking for more rockwork to be placed strategically throughout the installation.

All that’s required to reach this level of customer approval is observing and recreating the most aesthetically pleasing forms that nature has to offer – and the key is getting out into the wide world with eyes open and alert to the possibilities. Selecting real rocks from which to take a casting is an extremely exciting part of the work; actually seeing them duplicated as castings is also satisfying because we know that our inventory of authentic forms expands each time we take new molds. As we’ve progressed, we have more and more forms to use in our work. 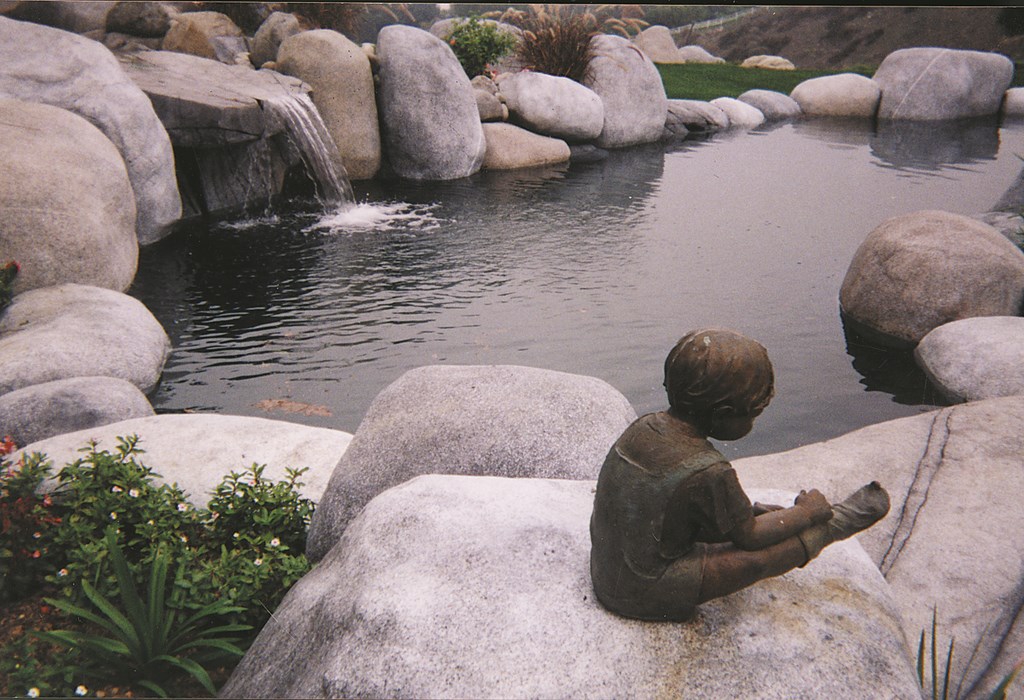 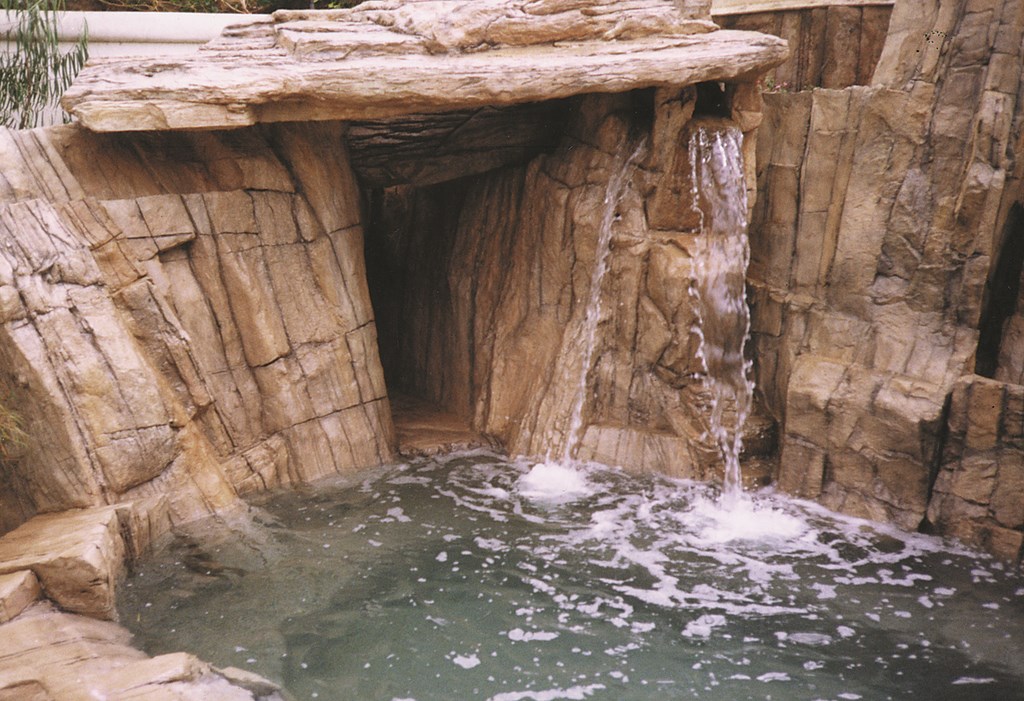 But it’s not all about amassing a collection of forms: Rock formations must be informed by what you’ve observed and studied and recorded in the field – or you surely will miss the mark in your clients’ backyards no matter how many great rocks you’ve copied.

That’s not to say that getting a good casting isn’t important! As do many in the trade, we get our castings by first latexing and fiberglassing real rocks, then making glass-fiber reinforced concrete (GFRC) castings from the resulting molds. These castings are direct duplications of the real thing, which gives our rockwork its authenticity – but that’s only part of what’s going on. 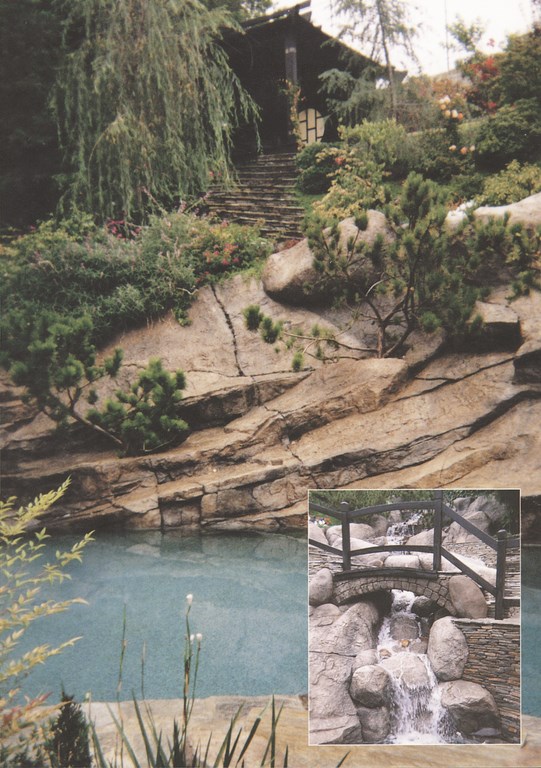 The real secret to the work our company does is that it pleases the senses because it is what I call “geologically correct.” People tell us all the time that they cannot tell that our rocks are faux, and I know it’s definitely not because of the authenticity of details in our castings. Instead, it has much more to do with how we assemble and combine individual castings on site.

How is this done? The fact of the matter is that we play god. We take the time and energy to arrange the castings until they, in combination, make an artistic statement that effectively mimics an attention-grabbing rock formation we’ve seen before. We definitely don’t do this by simply grouting castings together in random patterns. This would result in a formation that might be authentic in detail but that would make absolutely no sense geologically.

In playing this creative role, I ask myself: “What would Mother Nature do if those same rocks appeared in that particular environment?” More important, perhaps, I follow that up by asking: “What would she do to make those same rocks result in an arrangement that was so aesthetically pleasing that we would feel compelled to take a picture of it?”

To reach this lofty goal, we chop and hack, angle and manipulate our stores of existing castings, adding and configuring until we achieve the formation we’re after. This is not a process that should be hurried!

No matter how we combine old and new, we proceed knowing that the forms alone make no “statement.” It’s only through the process of assimilating existing and new forms and assembling them in eye-catching ways that we create rock formations that are not only believable, but rival nature’s best.

Of course, the fact that you’re bent on achieving spectacular results means nothing if you can’t sell your clients on your ideas. In a rockscape, you’re working in three dimensions. A simple plot plan might be enough to fire your imagination, but many customers need more.

But we usually start from a plan, typically beginning by recommending a rock type from our portfolio and suggesting that some new molds will complement the forms the customers select. We’ll guide and offer ideas, but we always listen carefully to make certain we’re working with rocks the clients really want. Once some basic decisions about size and type and quantity are made, we’ll often take the pre-selected elements and do most of the designing on site. 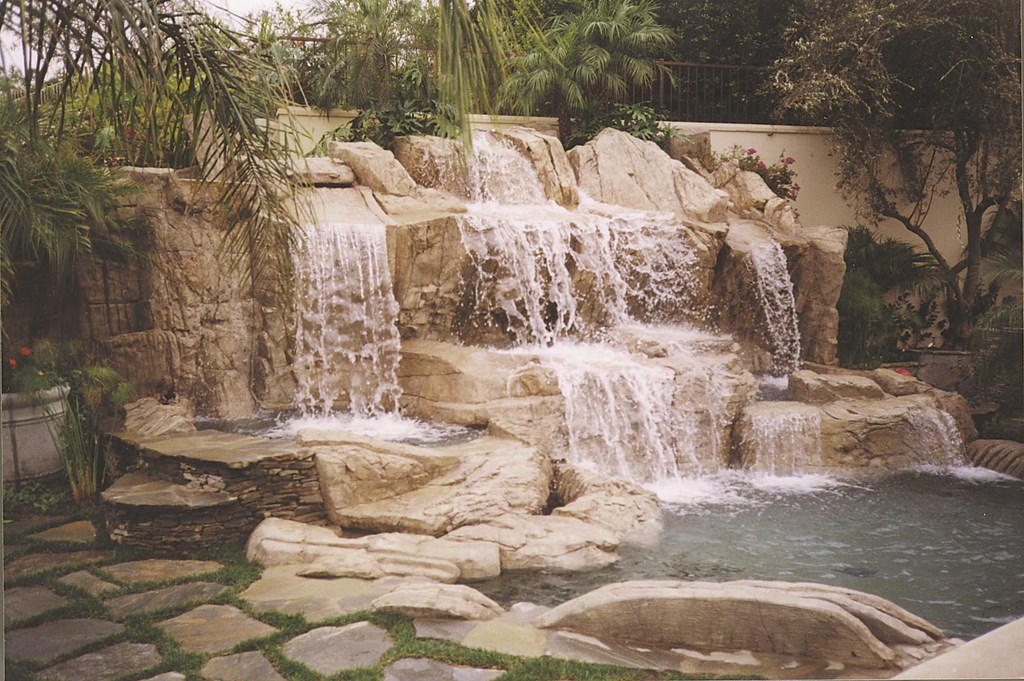 At this stage, however, clients sometimes want a rendering or even a clay model – either of which we’ll create for a price. This need arises when the customer can’t visualize the project well enough to make the purchase decision, but, more often, clay models in particular come into play when needed to guide the efforts of a crew from another company. They give the installer an exact pattern to follow – an absolute necessity in the absence of an on-site designer.

The negative effect of using a rendering or a model, of course, is that using a plan can take what should be a personalized installation – one inspired by its surroundings – and make it purely automatic. Given that caution, however, models are an excellent idea unless you’re fortunate enough to be dealing with an outside rockwork company that also happens to like designing various combinations of rock forms on site.

In my book, on-site design is the only way to go: It lets you work effectively with the topography and any existing or planned structures or landscaping. You cannot get the precise lay of the land, see the exact eye-level views and accurately take in all the lines of sight with a plan and/or model: You lose touch with the environment and lose sight of the total picture.

And my preference for designing on site extends even to large commercial projects. Models may be an expedient way of communicating with a large production crew, but to me, there’s no replacement for an on-site designer who is familiar with how to arrange, alter and interpret rock formations and anticipate what the results will look like once everything is finished.

Lots of builders nowadays are familiar with the possibilities of faux rock. I suspect that others have tried and for any number of reasons haven’t been completely satisfied with the results. If you’re among these skeptics, I encourage you to take a second look because faux rock has come a long way.

Indeed, there’s a growing recognition that, like so many other aspects of the watershaping game, the ability to use existing rock forms and create new formations is a true art form, one that requires time spent studying natural rock formations and in learning how to apply those shapes in manmade environments. In other words, there’s no shortcut to excellence whether you use real rock, faux rock or both. It’s hard, sweaty work that calls nonetheless for sensitivity and a designer’s guiding touch.

By declaring faux rockwork an art form, I don’t mean to imply that all faux-rock installations need to mimic the contours of the Grand Canyon or Garden of the Gods (outside Colorado Springs) to be effective. In fact, faux rock is as effective on a small scale in small installations as it can be in large ones. The key is to keep in mind that the job of the designer is to arrange the forms being used to create an impression that is believable, that makes visual sense and belongs.

If you settle for less, after all, you’re selling the rocks you’ve used as your models short.

Ken Macaire, owner of Environmental Aesthetics of North Hollywood, Calif., has been a landscape designer since 1967. From 1973 to 1984, he owned and operated Macaire Nursery, a landscape supply and nursery firm. During that time, he began developing techniques he now uses to create high-end artificial rock formations. Beginning with modest waterfalls installed in conjunction with small ponds, Macaire’s work quickly expanded into larger pool and spa installations. He now works with a variety of contractors, landscape designers and architects. His firm has won several National Spa & Pool Institute Design Awards for projects that have included his artificial rock installations.