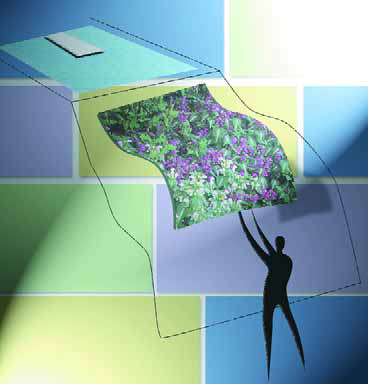 Last time, we talked about planters, terracing and a couple other techniques for stabilizing slopes and making them look great as backdrops or foregrounds for hillside or hilltop watershapes. We left for this column the important discussion of what to plant in these spaces.

In making these suggestions, I’ll discuss soil-binding plants and other ground covers that contribute specific desirable qualities to landscape settings. My reasoning is simple: Although sod is a great ground cover and is certainly versatile, I believe that having a broader and more decorative palette to work with will do a better job of inspiring the design process.

It’s important to note that almost any ground cover will slow soil erosion. In making your selections, you need to consider site specifics, including the angle of the slope, the nature of the soil, and the potential for large chunks of earth to fall away under excessive moisture conditions. After determining those features, you’ll be ready to choose a ground cover that has the correct soil retaining/binding qualities for your particular slope.

The list below includes both clumping and trailing varieties, with clumping plants preferred where you need to keep things under control – and trailing types when you’re working in larger areas and aren’t afraid of them taking over. (As usual, please consult a local garden guide to determine if the variety you’re considering is trailing or clumping and, as always, check with your local nursery for varieties that grow best in your zone.)

[ ] Ophiopogon (Mondo Grass). I’ve used the standard, dwarf, and black varieties of these, and each is useful in different situations. The standard variety is great for large areas where you want something taller than grass that will tend to discourage foot traffic. The dwarf variety works best in areas where you simply want to cover the soil and see a flat, textured surface. Plant both of these varieties close together for full coverage. Save the Black Mondo Grass for more ornamental purposes: It doesn’t grow into a thick, covering mat.

[ ] Campanula (Bellflower). The “poscharskyana” variety of this plant makes a good shade/ground cover and has nice lavender flowers, but it looks weedy after the flowers fade. I prefer the “muralis” variety, which makes a nice green clump and sends out individual flowers that fade away quietly when they’re done. (Note: This is not a great slope stabilizer but can be used in combination with other plants that get the primary job done.)

[ ] Liriope (Creeping Lily Turf). After a recent column, one of you pointed out that this is considered a trailing plant. My experience, however, is that it acts more like a clumping plant. Either way, Liriope is a great ground cover where you want something a bit taller – but not so tall that it obstructs the view of upslope plantings. It’s a grassy plant with small, lavender flowers and comes in various shades of green as well as variegated selections. It adds nice texture to a slope, especially when placed next to a lower-growing, leafier ground cover.

[ ] Bamboo. There are several low-growing varieties of bamboo that work well as ground covers – particularly in Asian-style gardens. Be very careful if you’re considering a trailing variety, however, and be sure to place a root barrier around the area you want it to occupy. Once it spreads into your other plantings, it’s difficult to eradicate.

[ ] Fragaria chiloensis (Ornamental Strawberry). This plant will grow just about anywhere – so much so that it’s considered a weed in some locales. Many people appreciate its aggressiveness and the fact that it tends to thrive where nothing else will. It has small (but attractive) white flowers and fruit that looks like strawberries (hence the name), but I wouldn’t recommend biting into one.

[ ] Ivy. Without question, if you’re looking for a ground cover that will stabilize a slope, requires extremely low maintenance and makes a solid green cover, ivy is your plant. Yet it is also without question one of the most hated selections in the entire plant kingdom. It’s often said that after a nuclear conflagration, the only survivors will be cockroaches and ivy. Taking that as a testimonial to its hardiness, you can choose among a number of varieties to satisfy your needs – and not all the solutions are entirely disagreeable. Needlepoint ivy, for example, is perfect for smaller areas, while Hedera canariensis is a familiar choice in many areas.

[ ] Pachysandra. This plant is used mostly in cooler areas and is a wonderful ground cover if your clients want something their neighbors usually won’t have. It has a dark-green tone that looks great next to something lime green or gray, and it also serves as a great cover for spent bulbs. (After the bulbs have faded, simply tuck the yellow foliage under the pachysandra and wait until they pop up again the following year.)

[ ] Ice Plants. As with the ivies, you have many options when it comes to ice plants. The most common varieties, however, are not tremendous soil binders – nor are they necessarily the most attractive choices. I prefer varieties such as Rosea Ice Plant, which blankets many of the hillsides above Santa Barbara and in springtime turns the slopes a deep magenta color that’s visible from anywhere in the city.

[ ] Lamium maculatum (Dead Nettle). This is one of my favorite ground covers, and it has the worst common name possible. Despite that grim fact, I particularly like the “Beacon Silver” variety, with its variegated leaves and delicate pink flowers – three colors in one plant. Don’t look for this ground cover to hold a slope, however, as it’s best suited for smaller and flatter areas.

[ ] Lysimachia nummularia (Moneywort). This plant has light green leaves with tiny yellow flowers – although it tends to get darker in the shade. It has proved quite successful for many of my clients by staying low (under six inches) and covering quickly on both slopes and flat areas.

[ ] Osteospermum fruticosum (Trailing African Daisy). This plant covers a large area quite effectively, but you can tell by another common name for this plant – “Freeway Daisy” – that some people don’t hold it in very high regard. The most interesting fact about this plant is that the flowers open up purple on the first day and fade to white the second day. It’s great for a hot, full-sun environment, although it tends to look rangy and weedy during its non-blooming periods.

[ ] Sagina subulata (Irish and Scotch Moss). These plants are great ground covers for Asian-style or contemporary gardens. They tend to stay quite flat, making nice backdrops or foregrounds for other plants. I particularly like the Irish variety with its lime-green tone. Both can handle full sun or partial shade and stay within three or four inches of the ground. These plants are also champs when it comes to keeping up soil moisture: They’re so dense they retard evaporation.

[ ] Soleirolia soleirolii (Baby Tears). One of the most trusted and widely used of all ground covers, this plant isn’t a soil binder, but it can cover a shady slope beautifully. Small plugs cover rapidly, keep the soil moist while lending a soft appearance to an area and cover soil that would otherwise be bare and highly evaporative. One of the other advantages to this plant is that it springs back fairly quickly when you walk on it (although it’s not suitable for high-traffic areas).

[ ] Zoysia tenuifolia (Korean Grass). This plant stays low, covers thickly and is widely used in Asian-style gardens. It has the unusual habit of “buckling”, giving it a bumpy appearance. If well watered, it looks good in warmer climates year ’round – but it also tends to die off in clumps, which can sometimes look unsightly. Despite its drawbacks, it’s great for achieving a meadow look on large slopes.

[ ] Junipers. With so many different varieties to choose from, junipers are quite versatile – particularly if you can find clients with a craving for a ’60s-retro look. Check on the different varieties to see which do well in full sun or partial shade. You’ll find quite an array of heights, ranging from a few inches off the ground to a few feet. I recommend sticking to the low growers: The larger varieties tend to become woody underneath, even if well watered.

[ ] Bougainvillea. Most people think of bougainvillea as growing on walls, but it also comes in a ground-cover variety. Plant this prickly ground cover is an area where you won’t need to tend to other plants – or where you want to keep people out. Bougainvilleas tend to thrive in drier conditions, which cuts down on watering, but be careful: It can become a fire hazard when allowed to build up too high. (You can avoid this issue by urging clients to keep plants trimmed within a couple feet of the ground.)

[ ] Trachelospermum jasminoides (Star Jasmine). This plant is well loved in California area for its fragrant Spring blooms. It’s very easy to grow, and the only drawback I can think of is the milky sap it puts out when trimmed. Keeping it pruned within a foot of the ground will avoid woody buildup. Star Jasmine also covers arbors and posts very well.

[ ] Rosmarinus (Rosemary). I hated this plant as a child because we had it in our front yard and I was constantly being shoved into it by my older brothers. Not only did the woody undergrowth hurt, but I also hated the smell it left on me. Now older and more mature and no longer living with my brothers, I love having this reliable ground cover in my front yard both for fragrance and for cooking purposes.

[ ] Ceanothus horizontalis. This is only loosely termed a ground cover, although it is clearly classified as such and is great for large, steep slopes. It shrouds the hillsides around Carmel, Calif., very effectively, for example, binding the soil and offering small, attractive, blue blooms.

[ ] Festuca rubra. I’ve seen slopes covered with this for years and have often thought about planting some on my slope. This is the ultimate in meadowy-looking ground covers, swaying in the breeze and giving a very soft feel to any setting. If you’re working with a great slope that you want to cover quickly and easily, hydroseed this grass on it – I’m certain you’ll love the look!