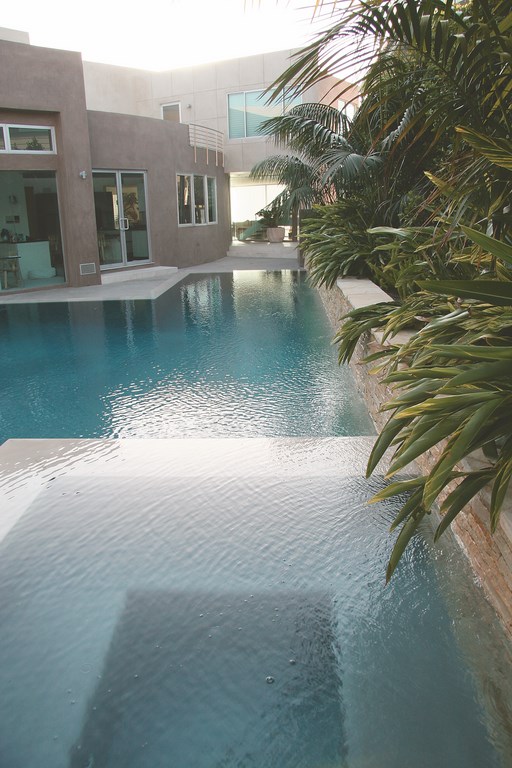 One of the great things about working with different architects and designers the way we do is that, as builders of pools, spas and other watershapes, we enjoy opportunities to work across a broad range of design styles and sensibilities.

In this instance, we’re focusing on one of our favorite Southern California architects, Mark Singer. He’s known regionally for crisp, clean, minimalist designs and is well regarded for his work on breathtaking lots along the coast in Laguna Beach, Newport Beach and other well-heeled cities overlooking the Pacific Ocean. To our good fortune, most of his projects include pools, spas, courtyard waterfeatures, outdoor sculptures and other amenities that enhance and extend his contemporary designs.

Our most recent project with Singer was completed in the summer of 2004 at an older home in the beautiful beach community of Corona del Mar. The house itself was not originally designed by Singer, but it had been remodeled by him several times in the years since. In fact, so much has been done at this point that it’s practically impossible to distinguish this residence from projects he has pursued from the ground up.

The homeowner is a wealthy land developer, a self-made man and a major fan of Singer’s who has collaborated with the architect on three major renovations that have completely transformed his home.

As with all of Singer’s work, the house now features a great deal of glass, metal and poured-in-place concrete characterized by tremendous sensitivity to line, space and light throughout. The last vestige of the original construction was the pool – a drab, uninspiring lazy-dogleg-shaped vessel that really didn’t go very well with the remodeled home.

It was located in a courtyard that opened over a sweeping ocean view and occupied a space that is now a focal point from several key areas inside the home. Singer knew exactly what he wanted to do with the courtyard, and the homeowner was extremely enthusiastic when it came to allowing him to complete the scene with a brand new pool and spa. 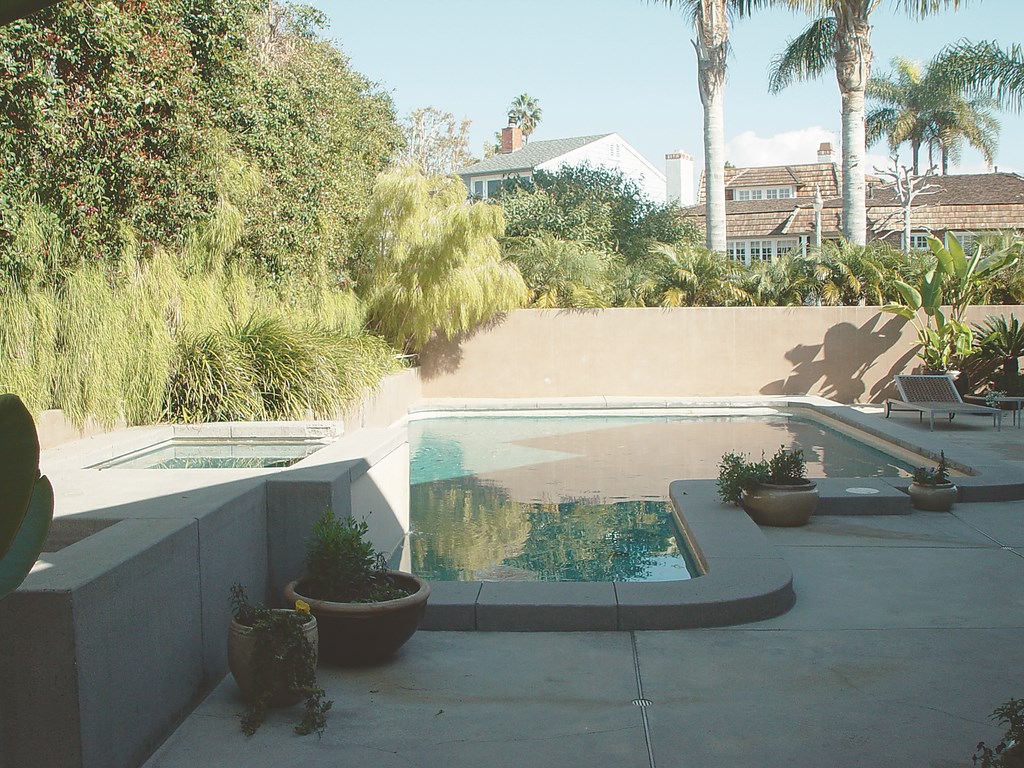 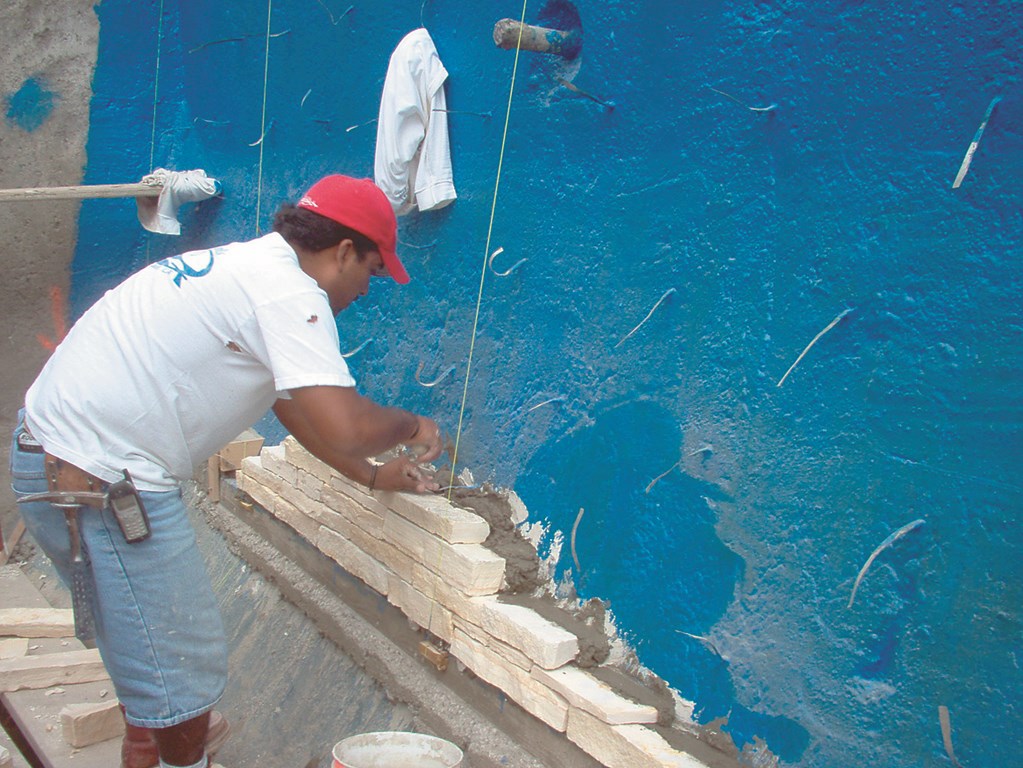 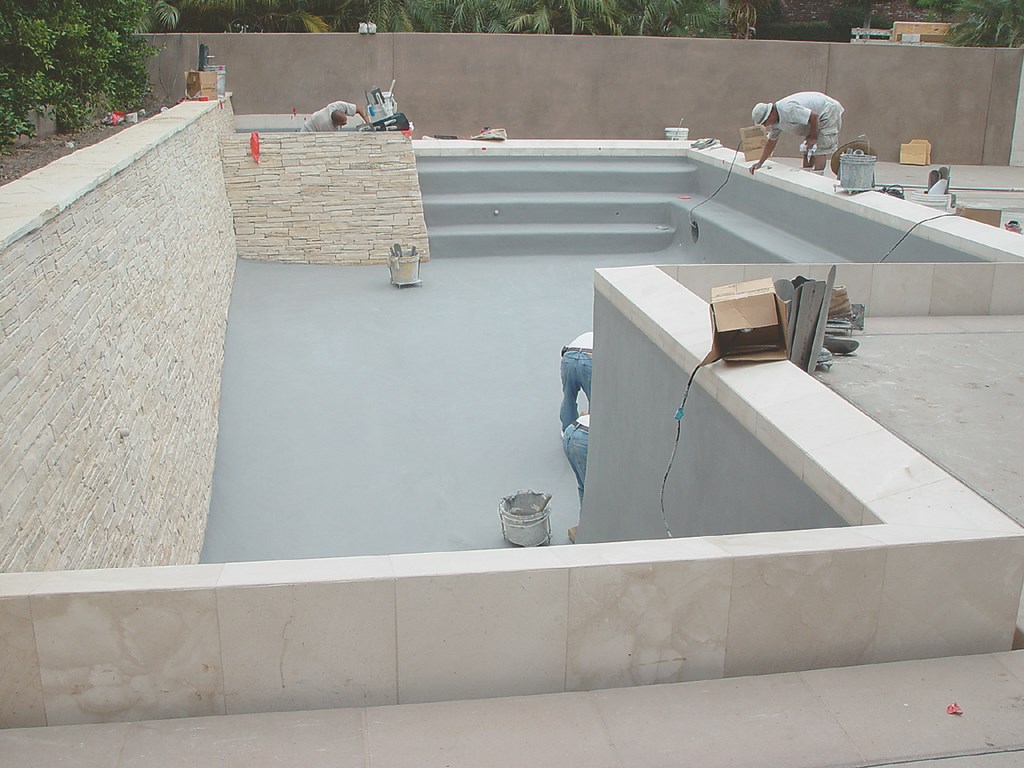 We were fortunate enough to be referred to the homeowner as the recommended contractor. As is true of many of the designers whose work we’ve had the pleasure of executing, Singer has a wonderful way of maintaining control over the work while simultaneously hearing what we have to say and allowing us the freedom to build watershapes based on our experience. He’s extremely energetic about discussing details and weighing alternative approaches – truly a nice guy and always accessible, responsive and someone who makes collaboration a real pleasure.

Of all the projects we’ve done with Singer, this one is certainly among our favorites – absolutely spectacular and more than worthy of its stunning setting. The rectilinear pool has a large notch at one end that was included to expand the deck by a few critical square feet and has a square, raised spa at one end as well as a fantastic stone wall running the length of one entire side. 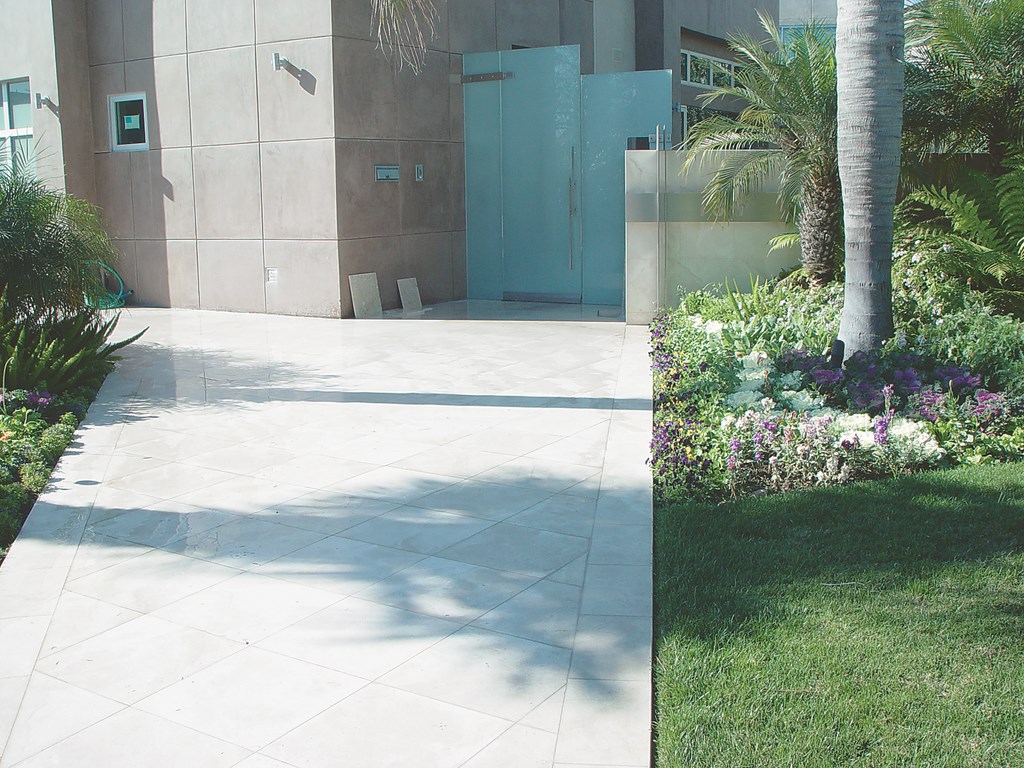 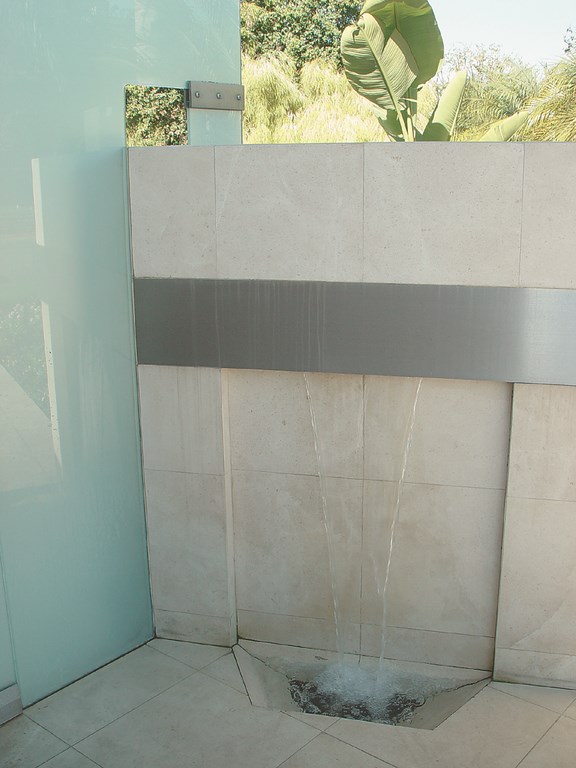 The wall rises 30 inches above the surface of the water and is topped by a 24-inch-wide planter. The entire span is finished in a stacked Irish Linen stone with a beautiful, ultra-white coloring and a chunky, meaty texture. The stone extends down past the waterline, reaching all the way to the floor of the pool. The idea was to create a sense that one side of the pool was an artifact of a quarry, setting up an intriguing juxtaposition of its rugged look with the stark, crisp modernity that defines the rest of the environment.

The other three sides of the pool’s perimeter are edged with a razor-sharp perimeter overflow system that drops over a low, raised bond beam capped in limestone and flows into a narrow gap at the base. The raised part of the wall starts where the spa leaves off on one side and is integrated into a wall that extends from the front of the house. There’s also a floating pad that enables bathers to step up into the spa.

The raised wall and the perimeter overflow are all integrated into a complex bond beam detail engineered for the project by Ron Lacher of Pool Engineering (Anaheim, Calif.). He also handled the overall structural design.

We began our work by demolishing the old pool and hauling it away like a bad memory. We over-excavated the site by a fair measure to enable us to form the pool with freestanding-panel construction.

The installation itself was all very straightforward in most respects, including the slot-overflow system that pours into a small gutter concealed by cantilevered concrete decking. The two-inch drop gives the impression that the water mysteriously disappears right into the deck. The main challenge we had here was with the hydraulics, as there was no room at all for surge capacity in the overflow system – an issue resolved by installing a big surge tank just below the equipment area. 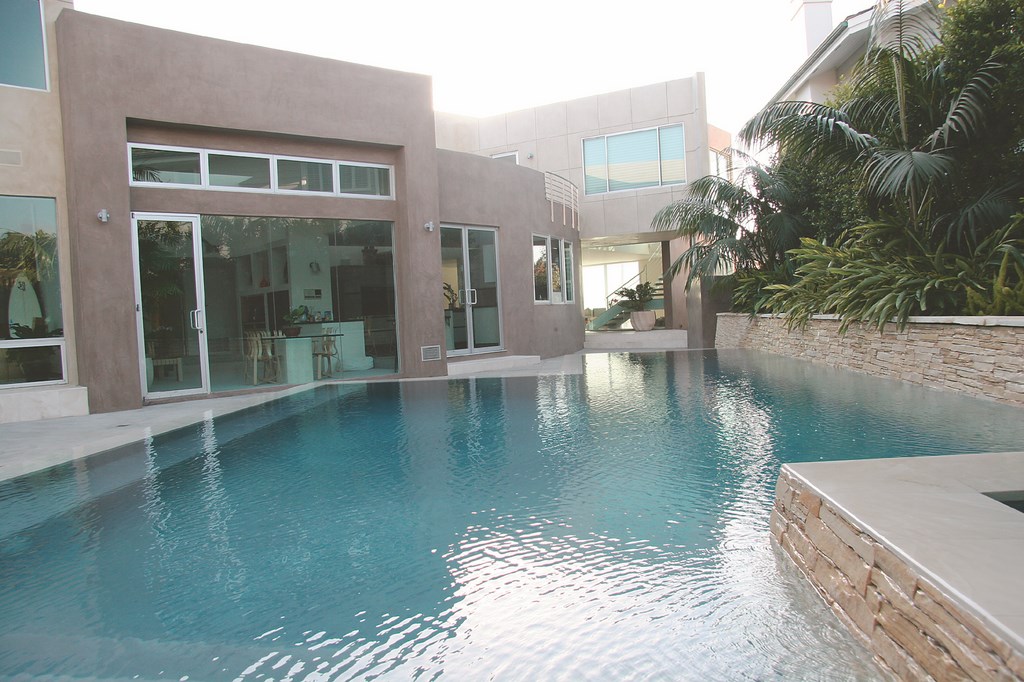 We formed the gutter as part of the bond beam, which meant that our forming work was crucial to hydraulic performance. We plumbed the trough with a six-inch equalization line that flows via gravity into a six-inch trunk line that flows at an easy two-percent grade into the surge tank.

The edges for the overflow had to be dead on, of course, to ensure an even flow over the edge, but the limestone caps also had to line up with a decorative grid pattern that extends into the concrete decking beyond. This required some precise preplanning and careful execution, and the result is that pool’s top-side structure aligns perfectly with and is fully integrated into the surrounding hardscape. The decking is in a Sedona buff color that blends nicely with both the limestone coping and the stone ledger on the back wall.

Settling on the pool’s interior finish was a lengthy process that involved Singer and the homeowner in several rounds of discussion. What finally emerged is a light, smoky-gray plaster with Colorquartz aggregate provided by 3M (St. Paul, Minn.). It lends a tranquil, light-blue tone to the water that makes it easy to see that the stacked-stone detail extends all the way to the pool’s floor. 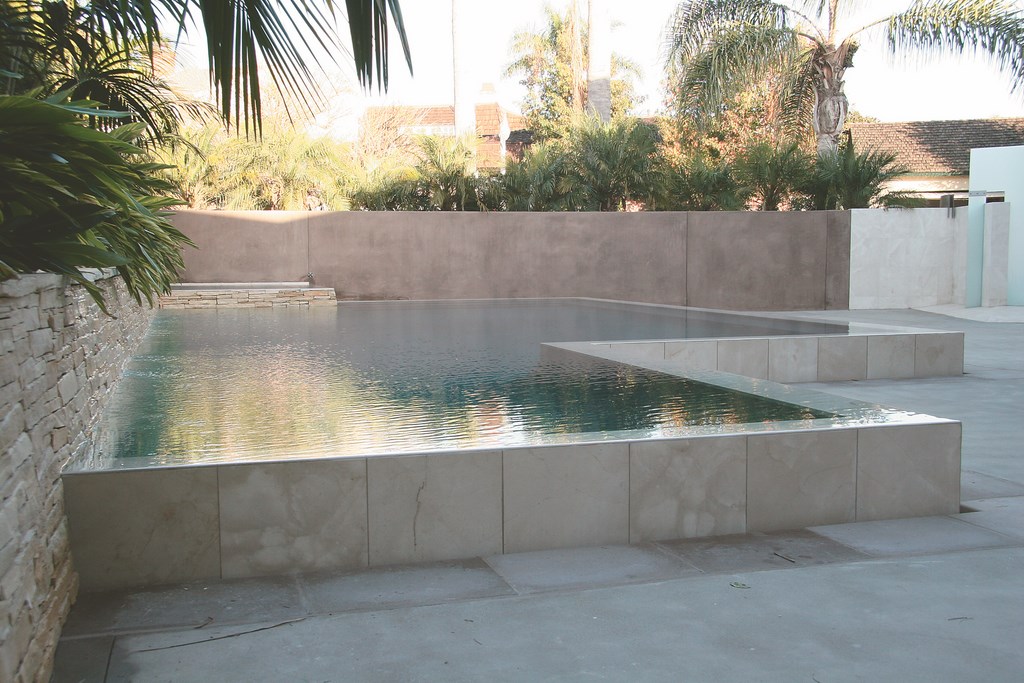 The stone wall itself is rigged with a subtle water effect that bleeds out of a series of hidden Custom Cascades weirs (supplied by Oreq Corp. of Temecula, Calif.) that send small flows of water down the entire face of the wall. The system runs off of a four-inch feed line that connects to multiple manifolds hidden beneath the wall’s capstones, which not only hides the water source, but also gives the impression that entire wall is made of the ledger stone. When the water wall is not operating, the well-sheltered pool is glassy and reflective; with the flow activated, the surface becomes articulated and textured.

Atop the wall is the abovementioned planter, which contains a variety of beautiful plants including a number of spectacular bromeliads. The wall runs the entire 35-foot length of the pool and extends beyond it, terminating at the wall that conceals the equipment pad. It’s all part of the bond-beam detail and emerges from the pool at a slight angle to accentuate the quarry effect.

The pool has a depth extending from three-and-a-half to eight feet. It is 25 feet wide at one end, narrowing to 15 feet wide at the other to accommodate some extra decking. The width at the deep end was intended for vigorous activity by the homeowner’s teenage children.

While the pool itself laid out nicely in the available space, the equipment pad was another matter. Confined to a six-by-six-foot spce, it made us unusually conscious of layout and equipment selection.

In all, there are five WhisperFlo pumps (Pentair Pool Products, Sanford, N.C.) and dual diatomaceous-earth filters (Hayward Pool Products, Elizabeth, N.J.) – one for the edge effect, the other for the main circulation/heating system. All of the pumps are plumbed with dual suction lines to prevent any chance of suction entrapment.

The main circulation system is designed for a six- hour turnover. Everything runs on two-inch (or larger) plumbing sizes to maximize hydraulic efficiency. We actually downsized the perimeter-overflow pump because the leveling is so tight that the entire effect runs on less than 100 gallons per minute.

The square spa measures seven by seven feet and also features a perimeter overflow on two sides – one flowing to the trough, the other into the pool. It has 17 jets in all, placed in accordance with the homeowner’s preferences. We avoided specialty therapy jets to avoid disrupting the appearance of the interior finish.

With contemporary designs such as this one, the key to success is paying attention to the elegant simplicity of the details. This project (and the one described in the sidebar at right) demonstrate how basic, rectilinear pools with carefully selected design elements have a power and beauty you don’t often see, even in more elaborate projects.

When a designer with Singer’s deft touch and flair for visual drama is on the case, the results are truly memorable – and a builder’s delight.

Martha and Randy Beard own Pure Water Pools, a construction/service firm in Costa Mesa, Calif. They met in 1981 while both were working behind the scenes in the entertainment unit at Knott’s Berry Farm. At the time, Randy also had a small pool-service business and convinced Martha (Marti) to invest in expanding the route. They purchased Pure Water Pools from another technician and have operated in the Costa Mesa/Newport Beach area ever since. As the route grew, both dropped their other jobs and focused entirely on the pool business as small repairs led to big repairs, big repairs to remodels, and remodels to new construction. Each year, they’ve seen their projects become more creative and technically challenging. Today, the firm works with many of the area’s leading architects and landscape architects to create a range of custom watershapes for upscale commercial and residential clients.