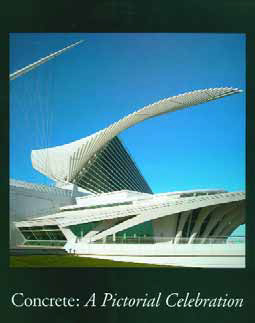 Concrete is so essential to the work of watershapers and so pervasive in all forms of construction that it’s a bit too easy to take it for granted. Using myself as an example, I’ll confess to having fairly thin knowledge of the material, its history and the myriad uses to which it is put to use – until, that is, I looked through Concrete: A Pictorial Celebration (published by the American Concrete Institute in 2004).

This wonderful, 260-page book offers a (mostly) visual tour of the fantastic and utterly essential applications of concrete that have indelibly marked the advance of modern society, worldwide. It’s organized into several sections, each one chock full great photos accompanied by informative, albeit brief, textual passages.

It’s not a technical discussion by any means; instead, it’s an almost dizzying tour of the seemingly infinite ways that this durable and flexible material has transformed our lives.

It begins with a section on the history of concrete, and the information was a surprise to me to learn that concrete’s use as a common building material is of much more recent vintage than I had thought. In fact, the book indicates that the first batch plant for concrete didn’t appear in the United States until 1891 – and that the first concrete street wasn’t built until 1909.

From that time forward, however, we witness an absolute explosion of concrete applications and technology – all covered in a series of additional sections.

As one might expect, there is an extensive section on our transportation infrastructure, including highways and roadway bridges. There is a section that deals with concrete’s use in residential architecture, featuring the soaring cantilevered decks of Frank Lloyd Wright’s Fallingwater, and another that covers applications in high-rise buildings and other substantial structures.

One of the most interesting sections has to do with concrete’s use in public-works projects, including images of aqueducts and dams and a particularly compelling look at the trailblazing construction of Hoover Dam. That Nevada landmark is particularly noteworthy when you consider the daring involved in undertaking so huge a project after just two short decades of experience in using the material for large-scale projects.

Equally fascinating is the section that deals with concrete in conjunction with water. There’s no mention of swimming pools here. Instead, we see seawalls and foundations for bridges sunk directly into the floors of oceans, lakes and rivers. There is also a section that looks at the bold use of concrete in the cantilevered structures that comprise sports stadiums and other large public venues.

Some of the most surprising entries in the book have to do with the use of concrete in the arts and in cultural or religious contexts. There are wonderful images of public monuments made of concrete as well as huge churches, synagogues and temples. And there are some impressive works of art, including the statue of Christ overlooking Rio de Janeiro’s harbor.

Although this publication doesn’t offer a shred of how-to information or a single insight into the intricacies of concrete science, it does offer a powerful testimonial to the creative flexibility that concrete affords all of us who use it. Through these striking images, we discover the true, expressive nature of a material that is a vital, integral part of our work as watershapers and truly has been the foremost design/construction material of the modern age.

Ultimately, the book challenges us, with every page and image, to think about ever more creative ways to use a material that has, as much as any other, transformed our lives in barely a century.