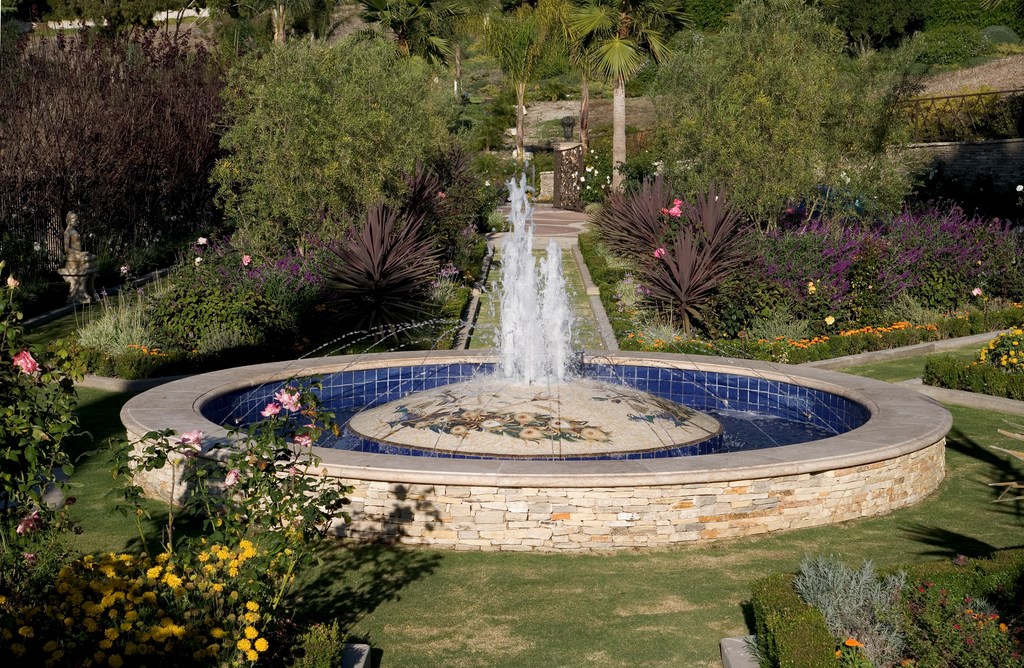 For the last few months, the Getty Villa in Malibu, Calif., has hosted a special exhibit called “Stories in Stone,” which is all about the nature, preservation and conservation of stone mosaics found in the ancient Roman cities of North Africa.

Even a quick walk through the halls is enough to show why these art objects speak to us across the millennia: Their colors are vivid, their decorative capacity is amazing, their durability is unrivalled and their sheer beauty is a delight even to the unschooled eye.

At best, tile mosaics of any caliber are both aesthetic and functional, timeless and contemporary, subtle and dramatic. They are also versatile – interior or exterior, commercial or residential – and have long been among the very best media available to designers and architects looking to infuse their work with the

essence of quality, elegance and timelessness.

Our firm, Vita Nova of Van Nuys, Calif., was founded with the simple, profound mission of bringing this classic art form into the modern world, delivering the wonder and beauty of tile mosaics to contemporary observers and countering the overwhelming sense of disposability that surrounds us. By providing a product that is both permanent and exquisitely beautiful, we’re doing all we can to reestablish in the United States an art form that has been prized for more than 2,000 years.

In our own way, we’ve augmented the classic form by using a variety of materials, including not only stone but also glass, ceramics and metals. We also look at the possibilities of the medium with modern eyes, creating mosaics associated with any number of stylistic traditions.

For all that sense of innovation, however, our approach is based firmly on the great tile-mosaic traditions of Ravenna, Italy, where for centuries artisans have manufactured some of the world’s most beautiful tiles and subsequently arranged them into mosaics that have graced the palaces of royalty, brilliant public spaces and even the homes of everyday people. 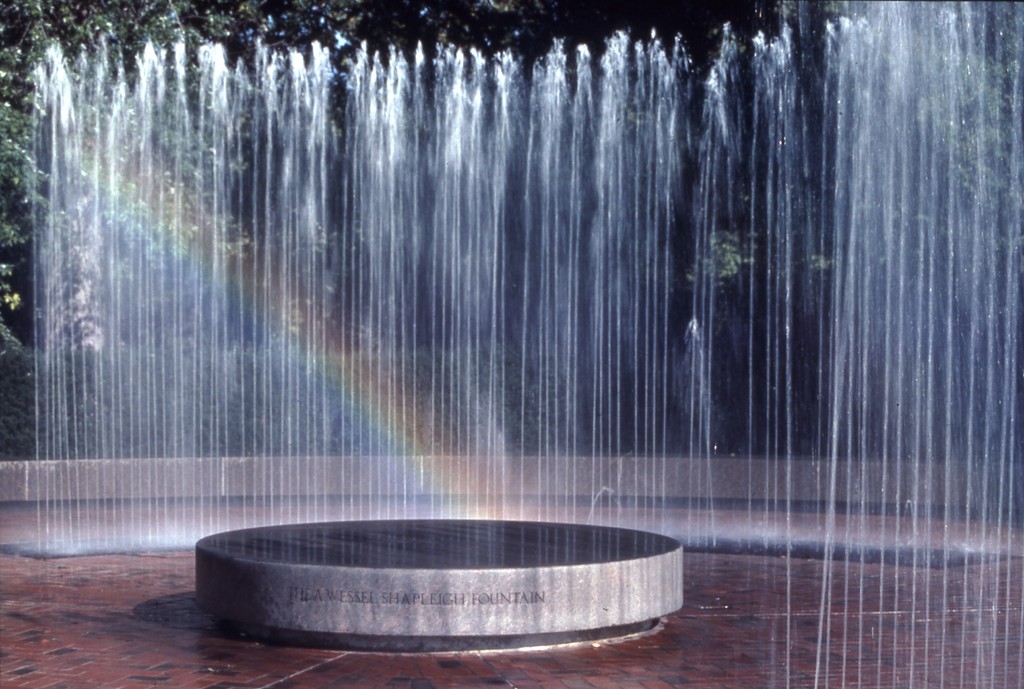 Tile mosaics are steeped in art-historical traditions that cross time, cultures and geography. Along with my partner and company co-founder Richard Skalak, I have an extensive background in art and art history as well as a passion for transmuting the grand traditions we’d studied into a usable and living art. When we started our company in the mid-1980s, mosaic art was largely lost in the United States, and the few installations here originated almost exclusively in Europe. It was our observation that there was a huge void that needed to be filled.

I became directly involved with mosaics while pursuing graduate studies at the Academy of Art in Venice, Italy, where grand traditions in tile were among the hundreds of media to which we were introduced. As an architect, I subsequently began using tile mosaics in many of my projects and gradually became more and more focused on them – always with the idea of stretching the limits of the medium. 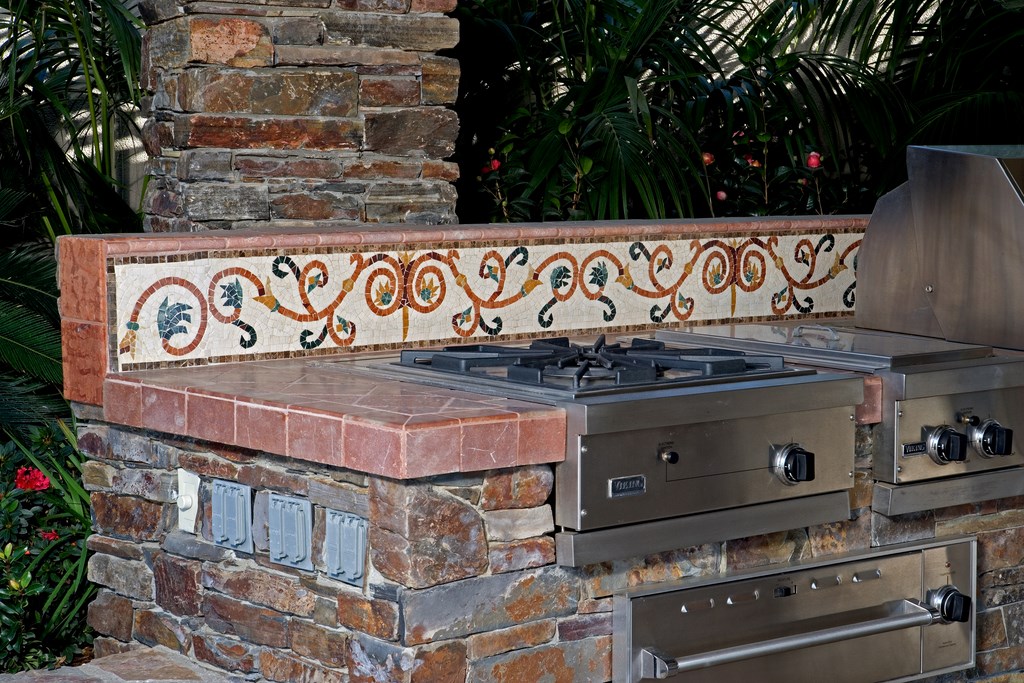 Today, we work in the full range of possible settings, residential and commercial: homes and resorts, inside and outside, in watershapes and kitchens, on patios and in dining rooms, on vertical surfaces and on horizontal ones. And although we cover a range of styles and imageries (Greek, Roman, Islamic, Moorish, Romanesque, Baroque, Neoclassical and completely contemporary) and push the envelope with respect to material combinations and colors, our connection to the past is always clear.

Among our most noteworthy (and viewable) projects are Bellagio and the Wynn Hotel in Las Vegas, where we worked directly with the owner and the project teams to develop extensive mosaics for a variety of exterior and interior settings. On the residential end, we collaborate with an extensive network of designers and contractors who get us involved in their projects time and time again, engaging us in a creative dialogues that are taking the art form in increasingly interesting directions.

Whatever the setting, we’re challenged to create mosaics that meet clients’ desires, but because true mosaic design is relatively unfamiliar to many, we often find ourselves in the role of educators who expand clients’ and designers’ understanding of what can be done and help them “see” aesthetic possibilities they might never have considered before.

Our job in these cases is two-fold: We want to lead our clients to consider aesthetic touches that no one else has; at the same time, we’re evoking images and associations that are surprisingly familiar to most people. This duality is particularly present in our work on pools, spas and fountains: Simply put, it’s a natural connection. 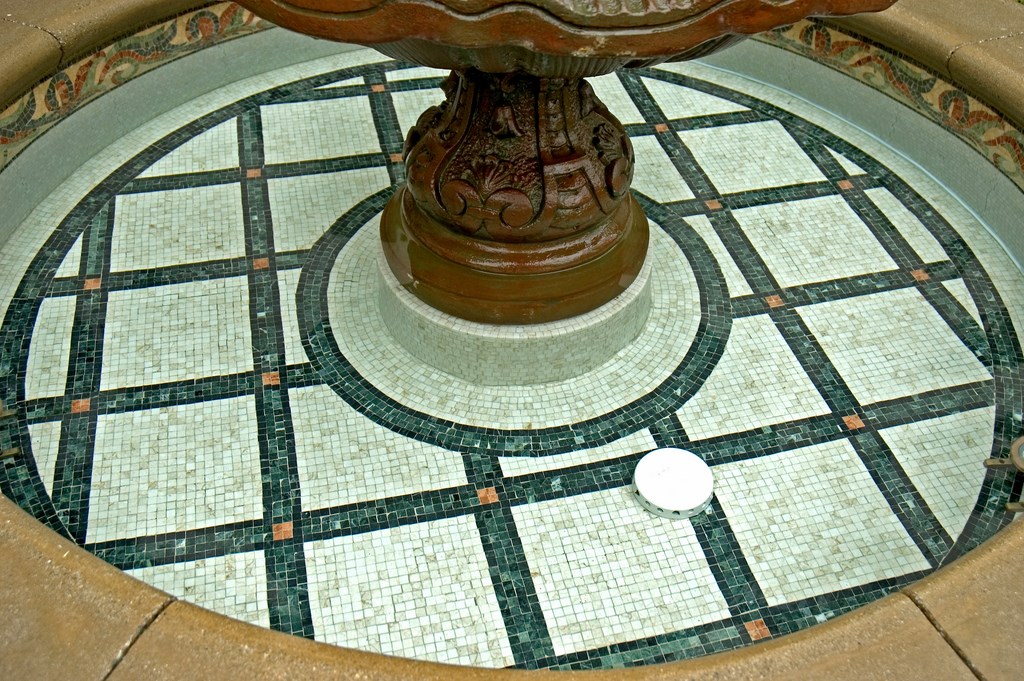 Indeed, tile mosaics are phenomenally compatible with aquatic environments of all kinds. What we’ve found is that as watershapes have become more integrated into their surrounding environments, designers are using mosaics as a common thematic element on, say, a kitchen floor or dining-room wall and on the floor of a swimming pool.

Beyond anything we’ve done since, however, our first steps into watershapes came out of frustration with the state of the art of waterline finishes. To say we found a lack of creativity and imagination is an understatement, and what we found is that simply offering designers an alternative was more than enough to get us started.

Our work at the waterline almost immediately led to mosaics that encompassed part or all of the interior surfaces of pools, spas and fountains – and this is where things truly opened up creatively. Now we see projects that follow in the traditions of Roman and Islamic baths for which entire vessels (and sometimes their surroundings) become wonderfully broad canvasses for our work. 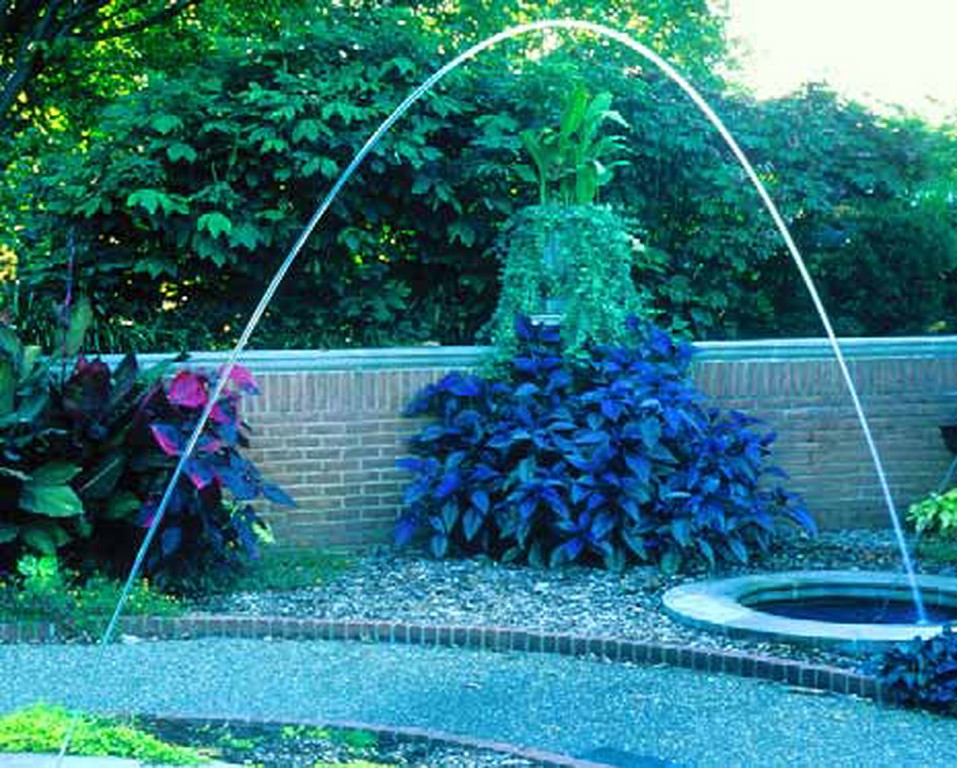 In addition to a great many projects that use classical designs, we’ve also created mosaics that reach into the modern era and have distinctive modern looks – for example, Art Deco imagery. We’ve gotten into underwater scenes as well, populating walls and floors with fish and other aquatic creatures. It’s wide open creative territory, and designers are responding by guiding us in new and exciting directions.

Swimming pools in particular have become ready showcases for works of mosaic art that exploit the fact that they exist underwater, where the refraction of light and the sense of motion imparted at the surface make the mosaics come to life in rare and wonderful dances. These installations also tend to be large, giving us big areas to work with and much to accomplish in visual terms.

The material we use is always extremely durable when exposed to water, so we don’t worry too much about longevity, but we’ve found that when a piece is designed to exist underwater, it usually requires the use of stronger, vivid and more contrasting colors so the work is more readable from above the water’s surface.

When we work on pools, we always start by considering them to be something more than mere bodies of water meant for swimming. After all, even if a pool receives regular use, the vast majority of the time it functions strictly as a visual element – a reflecting pool perhaps, or a fountain basin or classic “bath.” 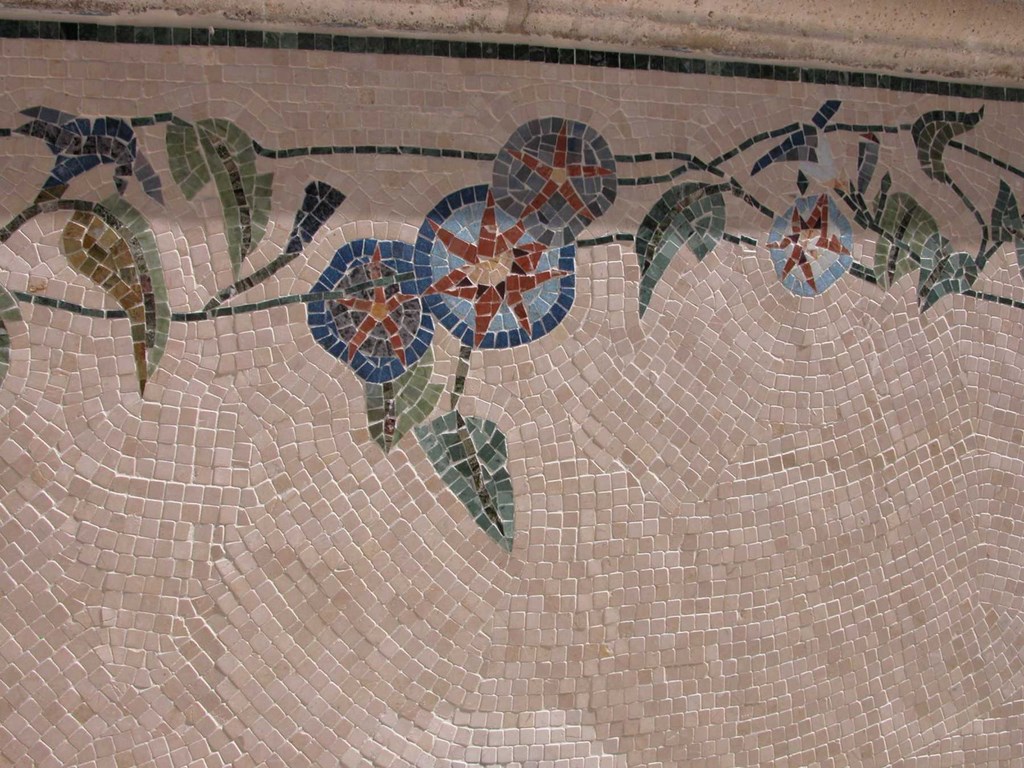 We take advantage of this “other” nature to create floral patterns or floating water lilies at the waterline and strive to conjure images that make the vessel look as though it’s been in place through the centuries. And of course there’s the fact that no two pieces of stone or tile are ever exactly the same, so there’s never a sense that our output is canned or pre-packaged: Instead, what we offer is handcrafted, original art.

To illustrate, we recently completed a project in southern California in which the client had built a decorative version of a Roman aqueduct in conjunction with a swimming pool. In this case, we used tile and shattered stone to create a sense of antiquity – a wonderful effect.

I’d argue that even just a few short years ago, you would not see have seen homeowners going to such extremes in capturing “classic scenes” in their backyards, but these days, this sort of open-minded, ambitious design is becoming more and more common – and tile mosaics are a perfect partner in catching that sort of creative wave.

The uniqueness of these projects has made us extremely adept at interacting with our dealers and their clients. We’ll take photographs of the spaces or, better yet, detailed renderings that cue us into colors, styles, forms and the overall scope and scale of the proposals. Playing off those cues, we’ll generally pick up colors or shapes or themes found elsewhere and set up mosaics in ways that unify spaces and harmonize with overall designs.

And because what we do is tactile as well as visual, we will often develop sample sections that clients and their designers can place underwater to get a sense of how things might look. In fact, this is almost always an important step, because water is a transforming medium and distorts the appearance of any mosaic in the abovementioned dance of light and motion: It’s as if the pieces come to life when submerged in water.

Although actually generating our tile mosaics is a painstaking, individual endeavor, we’ve found through the years that the very best projects we do are those that involve a quality pool designer, landscape architect, architect or interior designer. 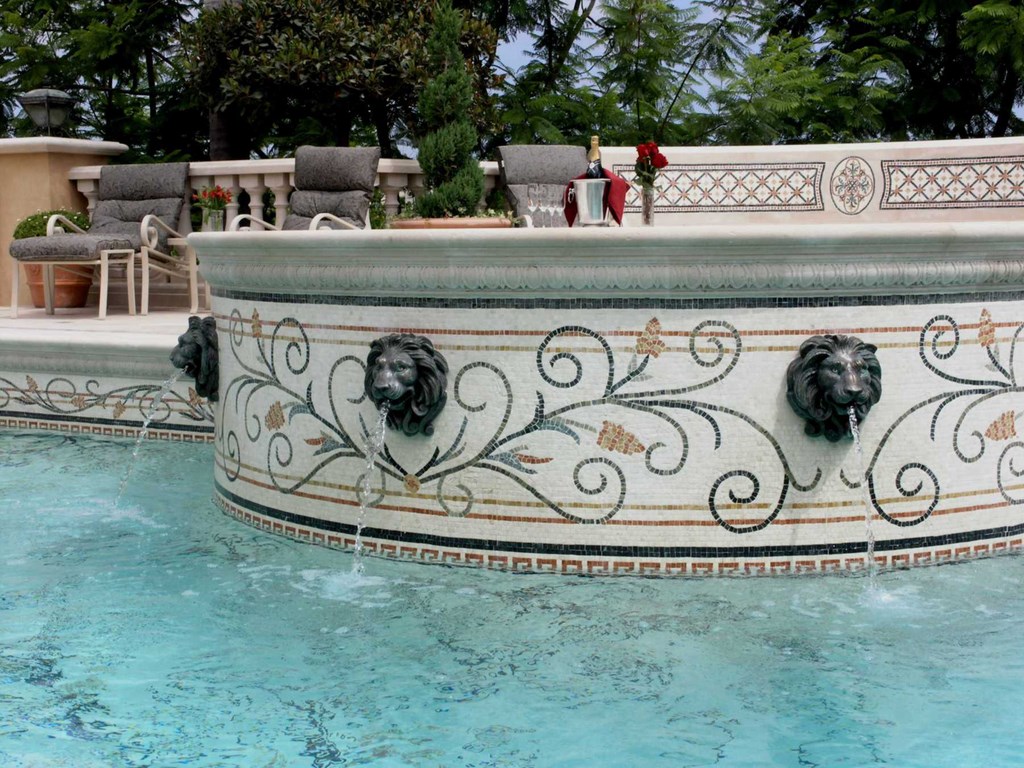 There are so many grand possibilities with tile mosaics that the involvement of other design professionals enables us to focus our efforts and work to the highest possible level from the concept stage forward.

What we’ve found is that when we’re brought in early, the mosaic becomes a key element from which other design ideas emerge. In such cases, our work isn’t an adornment, but is instead a key driving force for the entire design. Yes, there are still projects where we’re taking all of our cues from existing structure and landscapes, but in working closely with design teams, we’ve found an even greater potential for creating fully integrated spaces – enormously gratifying situations. 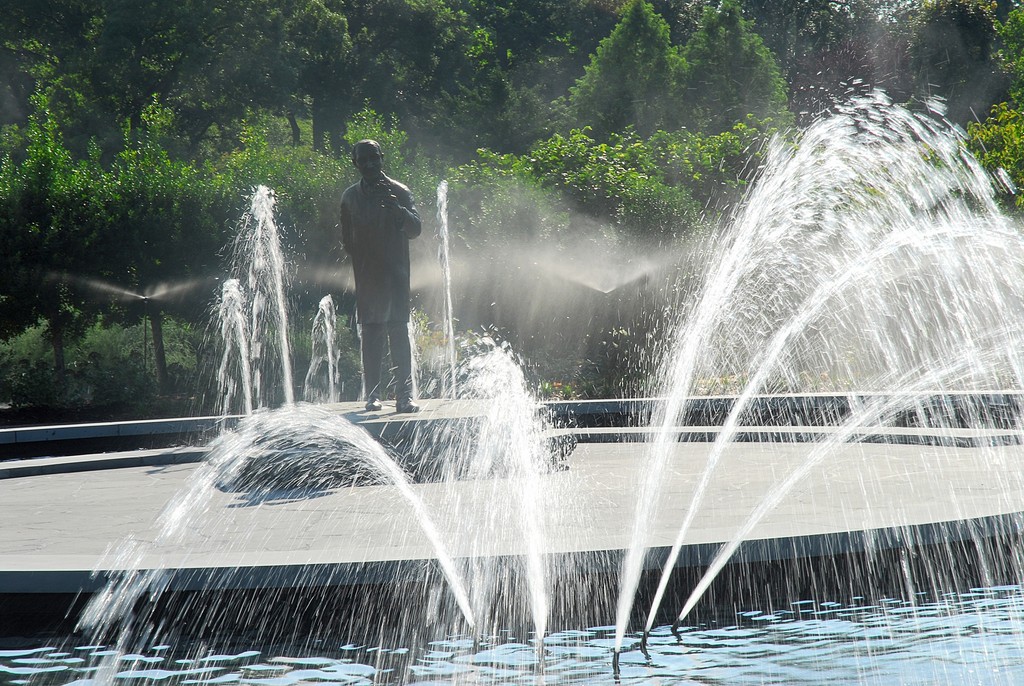 These integrated spaces are so satisfying because they hearken back to the classics we studied in school and to spaces more than 2,000 years old in which the flow from interior to exterior, from horizontal to vertical, from public to private was much freer and more open. To us, this is where we come closest to design ideals established long ago and far away – and offer the best possible tile mosaics to willing designers and clients.

Rodger Gariano is president and founder of Vita Nova, a Van Nuys, Calif.-based designer and manufacturer of custom tile mosaics. After first getting involved in the mosaic business in 1984, Gariano founded Vita Nova in 1991 and has since worked to bring what was nearly the lost art of tile-based art to contemporary designers, architects, watershapers and landscape architects in the United States and abroad. Gariano studied art and architecture at the University of California at San Diego and at the Academy of Art in Venice, Italy.