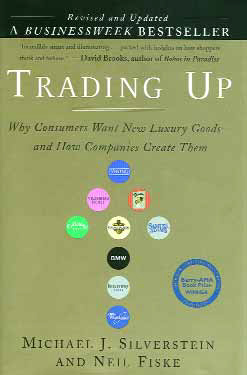 For many clients, the decision to purchase a watershape represents the second or third largest expenditure they’ll ever make. As a result, understanding the psychology that drives client decision-making is an issue that cuts very close to the heart of what we all do for a living.

To gain a firmer grasp on what makes clients tick, I recently turned to Trading Up, an insightful book by Michael Silverstein and Neil Fiske (Penguin Group, 2005). The 300-page text explores the issue of why people choose to spend more money in some areas of their lives while allocating less to others – a fascinating approach that sheds a great deal of light on the dynamics of making large financial decisions.

The premise of Silverstein’s and Fiske’s discussion is that most people have an idiosyncratic curve of preferences when it comes to making significant purchasing decisions. Why, for example, will some people will set aside substantial resources to buy a Mercedes or Jaguar while spending (relatively) much less on watches or clothing or home appliances?

Although they didn’t look specifically at swimming pools or waterfeatures, their dissection of such decisions goes a long way toward explaining exactly why acquiring a watershape of some kind is so incredibly important to so many people.

Unlike other discussions of consumer psychology I’ve seen (which, frankly, tend to get quite fuzzy at times), Silverstein and Fiske have devised a clear structure that holds fast to a set of reasonable assumptions and observable dynamics. What they do is define what can be termed “new luxury” verses “old luxury” and then break consumer preferences down into four distinct areas.

First, they examine the desire many of us have to take care of our health and ourselves. They make a strong case that as the Baby Boom generation ages, issues of personal well-being are becoming far more important than they were in the past. This is why, for example, vacations that provide opportunities to improve one’s health and fortify the spirit are becoming so popular – a trend pampering spas and health clubs have exploited (as have the manufacturers of hydrotherapy spas).

Second, they discuss consumers’ desire to make purchases that forge connections and affiliations with other people who have similar interests. Examples here include the growing popularity of groups devoted to sailing, fishing, rock climbing, wine tasting or bird watching.

Third, they cover a phenomenon they call “questing,” which involves the desire to make purchases that lead to adventure and the expansion of personal horizons. A vacation to Turkey or Egypt would fall into this category; a trip to Las Vegas or Mount Rushmore probably would not.

Fourth, the authors write about style, citing information in support of the notion that more and more consumers are becoming so sophisticated in their tastes that they want to obtain objects of beauty and refinement. With watershapes, I see this reflected in the trend toward a sense that the appearance of a watershape is every bit as important as its functionality. This, the authors explain, is why retail establishments such as Pottery Barn or Crate & Barrel have become so popular – right alongside automobiles from Lexus, Audi and BMW.

Of course, everyone is different and most consumers favor one set of preferences and emphases over another, but you don’t have to be an expert in consumer psychology to see how these factors come into play when a prospective client is deciding to enhance his or her life with a well-considered, well-designed watershape.