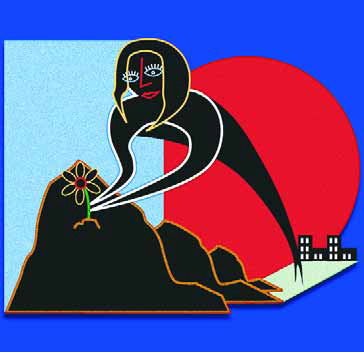 It’s not often that we’re asked to stretch ourselves. This past year, however, I was presented with that opportunity in landscaping a site that was quite different from the usual residential lots I encounter in Southern California.

Through all my years in business, I’ve become accustomed to working in a climate that supports year-round planting, year-round foliage and year-round lush views. In this case, I received a call to design a garden in the mountains above Southern California – and I jumped at the chance to branch out and do something truly different.

My clients owned a home on the upslope side of an empty lot for some time. They contacted the lot’s owners and let them know they would be interested in purchasing the parcel if they ever decided to sell it. When the property came on the market some time later, my clients snatched it up quickly, hoping to enhance their enjoyment of their vacation home by expanding the size of their yard.

Their plans called for landscaping only – no residential structures were to be added. Needless to say, the neighbors were thrilled that some architectural monstrosity wasn’t going to clog the property or their sight lines and that all they would see was a peaceful landscape when they looked out their windows.

Lake Arrowhead is a resort community in the San Bernardino mountains, a couple hours’ drive up from Los Angeles. The climate is vastly different from the west side of Los Angeles (with its ocean influence and where I design many projects) or the San Fernando Valley (where I live and know first-hand about its very hot summers and cool – but rarely freezing – winters).

Where I can prepare for most of my jobs on my home turf by going through a time-tested design/installation process with a rich set of plants and possibilities in mind, this mountain-top challenge called for a whole new way of approaching things. 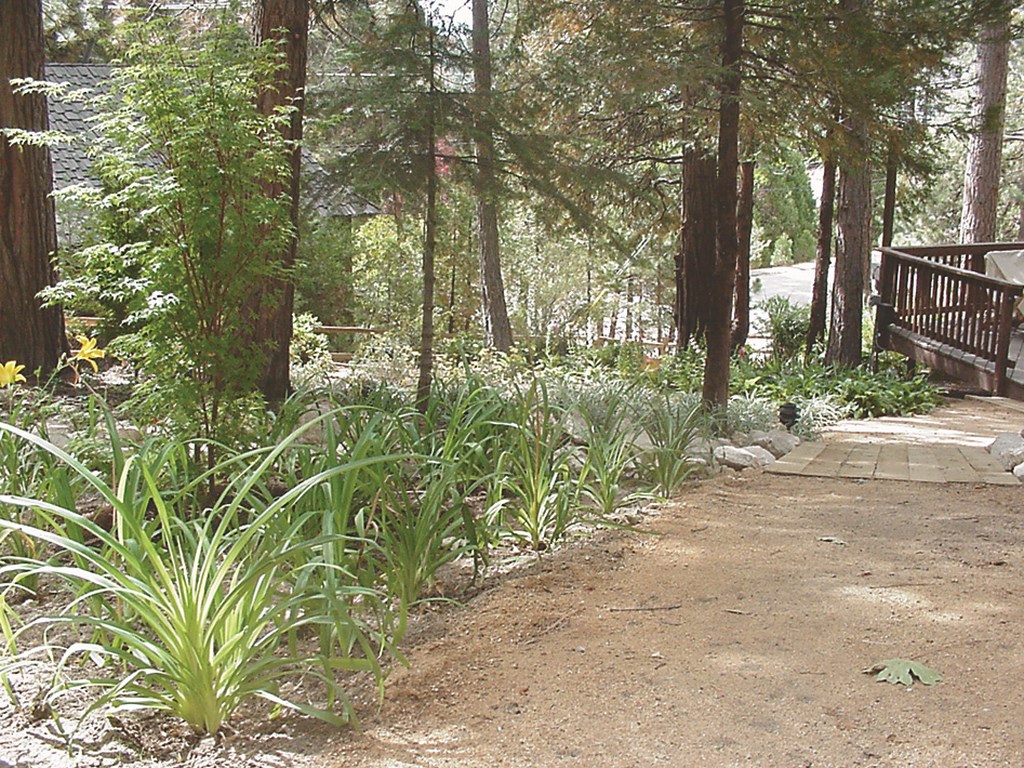 When I initially met with the clients and surveyed the site, I found a property dotted by mature pines, redwoods, cedars and various other trees, as well as a carpet of pine needles. Their vision was to create a place downslope from the existing residence that would become an outdoor entertaining space as well as a place for them to rest and relax on their weekends and vacations.

One of the existing features that impressed me was a small recirculating stream they had built themselves out of rocks they’d found on their property. I immediately saw this as the design element I could use to tie the two properties together and suggested that we continue the stream by winding it further down the slope to a terminus under a wood deck we’d been discussing. We’d then surround the deck with enough planting to create an illusion that the stream continued past the deck.

At first, my clients sensed that all of this would run well beyond the budget they’d been considering. (All they’d been thinking of was a wood deck surrounded by lush planting and a fence.) After some contemplation and, no doubt, some “imagination time” spent dreaming about the stream, they decided this would be just the element they needed to create the environment they really wanted.

After a more detailed survey of the property, we launched into discussions of how they saw themselves using the space and what “feeling” they hoped to achieve with the landscaping. At that point, I made a few initial recommendations.

I’d been doing some homework in the meantime and discovered that Lake Arrowhead has strict laws about removing trees above a certain size. As luck would have it, we found it would be possible to nestle the wood deck among some of the largest trees on the property while sacrificing only a few small volunteers that fell under the size limit.

The big trees grew in a half-moon shape about two-thirds of the way down the slope. The deck itself would rise well above the grade on the downslope side, while it would blend into the slope on the upslope side – leaving, of course, enough space for runoff to flow underneath.

Part of the property had already been surrounded by split-rail fencing, so I suggested we carry that look around the property for continuity. We also talked about installing a decomposed-granite pathway from the top of the new property down to the deck. 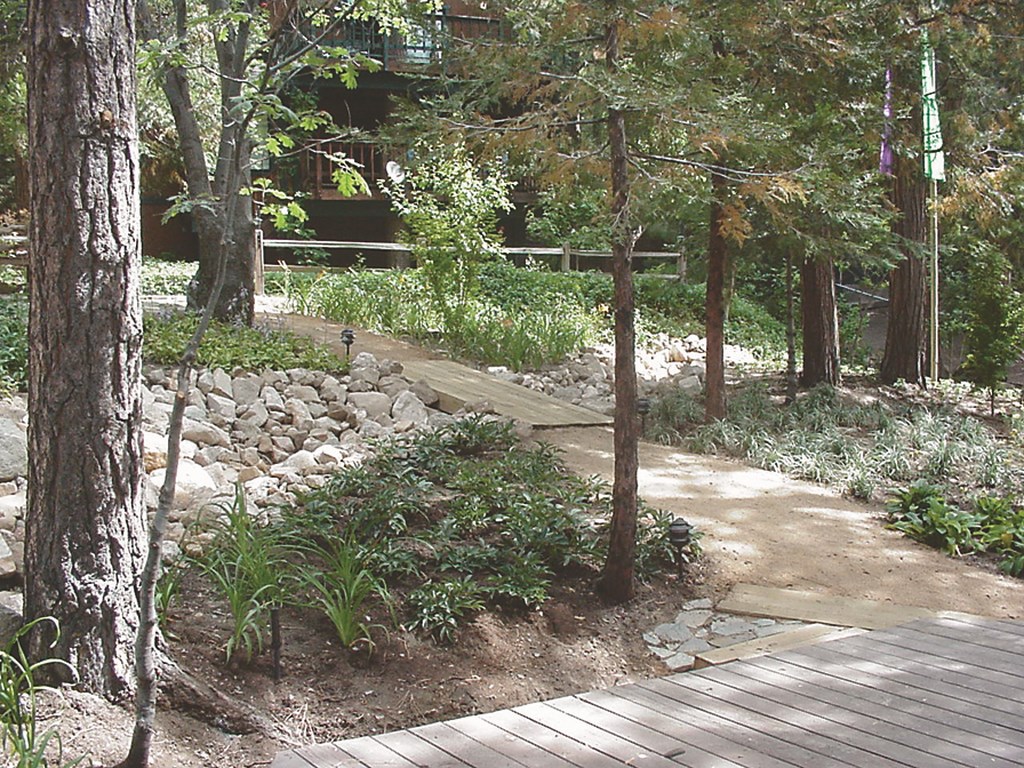 The new portion of the stream was to wind down the new property, terminating under the deck and visually linking the two parts of the property. As each step was discussed, my clients fell more and more in love with the way things were going.

The extension of the stream meant we would need to build some sort of bridge to span the pathway that led to the deck. Once we settled on using landscape ties for the purpose, it was time to consider the plants.

For me, the design work to this point had been pretty straightforward. I spent a good bit of time looking at the surroundings, evaluating the contours of the newly linked properties and, as always, considering my clients and the lifestyle they were striving to achieve. But how do you decide what to plant when you’re not on familiar turf?

The first steps are easy. I began by going through the Sunset Western Garden Book (in other areas you could use Taylor’s or the American Gardening Guides). After determining that Lake Arrowhead was roughly in Zone 3A, I compiled a list containing all the plants listed in the guidebook that fit within my design specifications and could survive in Zone 3A.

Not being physically located in that zone or familiar with its weather patterns, my next step was seeking out the expertise of a local nursery or landscape contractor who might guide me in my planting selections.

I faxed plant lists to several contractors and nurseries, and only one contacted me in a timely manner. After I explained the project, the owner of the nursery agreed to review my list and send me suggestions about which plants would perform best – and, as important, which he could supply.

In this way, I was able to identify plants that were properly acclimated for the zone and what was locally available (and what I’d have to supply myself through other means). After narrowing my selections and completing the planting plan, I sent the nursery my list. I was a bit disappointed at having to compromise on varieties: Instead of getting a specific variety of peonies or hostas I wanted, for example, I had to settle for colors that would work. 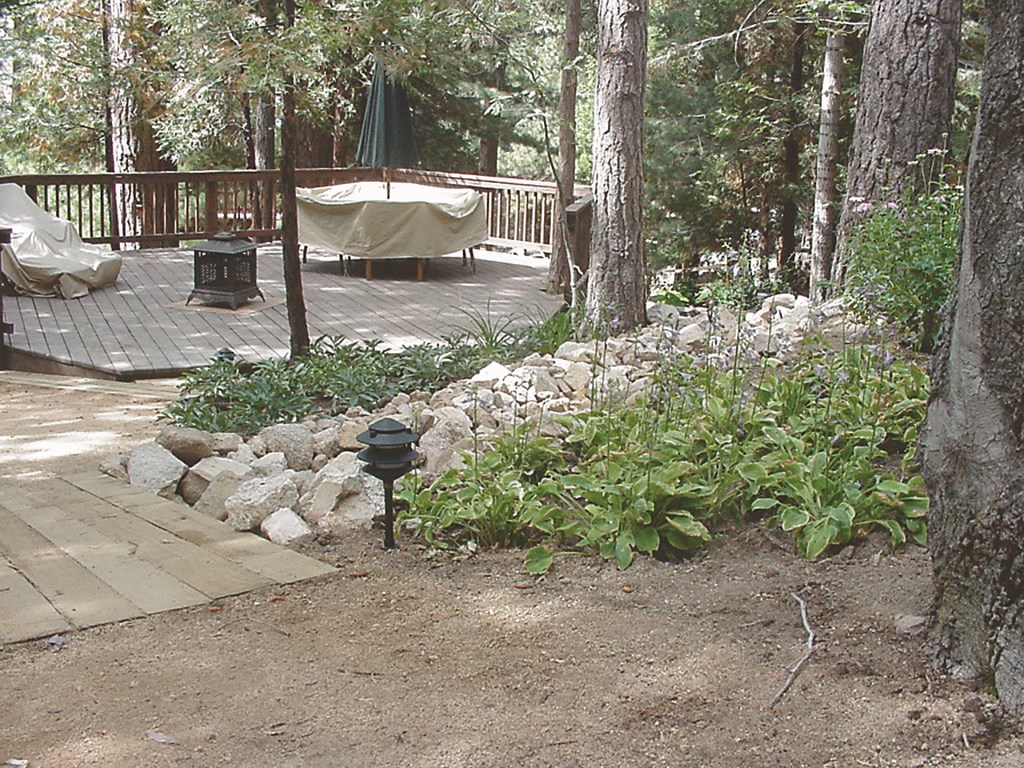 In one area, however, I was unwilling to compromise: I wanted Acer palmatum “Sango Kaku,” a coral-bark Japanese maple that I felt would be stunning in the winter against a blanket of snow. The nursery owner told me he couldn’t get the trees I wanted at first, so I told him I would pick them up “down the hill” (as residents of Lake Arrowhead refer to the rest of the world).

When he saw that he would be losing a significant sale (I had specified four of the maples in the design), he asked his supplier if the trees could be made available. Lo and behold, the maples arrived at the nursery soon after, and he immediately received multiple requests for the trees. (He later thanked me for educating him on a few different maple varieties that he was not used to carrying. Needless to say, he now carries them all.)

At the same time, he learned the benefits of stretching a little and taking a chance on unusual (but workable) plants. This process helped me gain his respect and confidence that I am a designer who knows plants and can work well in an unfamiliar area – something that will serve me well in any future mountain-top projects I tackle.

Finally, I figured that as long as my creative juices were flowing, I’d suggest something truly unique to my clients: I know that I would never be happy to be constantly running from deck to house carrying food, dishes and whatever else would be needed to make the deck the outdoor living space they wanted, so I suggested installing a dumb-waiter or some other sort of contraption to simplify the process of getting things from the top-level kitchen to the deck far below.

I’d only been half serious, but they took the idea and ran with it. Being sailors, they rigged up what they now call their “gondola” to make life in Lake Arrowhead even easier. It sure saves a lot of steps!

Next time: more about this project, thoughts on the installation and a discussion of contractor relations in unfamiliar territory.